Cooper was in his second week from July 2 - July 8.

Nursing: This was a very up and down week with nursing. Cooper really started to do better with latching on and with getting full feelings. While we're still having to battle with him only wanting to "snack" (that's totally his tendency, for sure), he's doing much better. Her is also a FAST nurser, just like LL was. Typically, he averages 5-8 minutes per side. He will occasionally go longer (or shorter) but this is about the average. We did encounter some new issues this week:hyper lactation. Basically, I make a TON of milk. While this is a better problem to have than making too little, it is still a problem. By Wednesday (the 4th of July), I had a breakdown about it. I was getting engorged several times a day (which is very painful), and Cooper was starting to dread nursing, too. He was having to gulp as fast as he could at every feeding so that he didn't choke, it was making him mega gassy, he was clamping down during nursing to try and slow down the flow (ouch!!). He would fuss while nursing and want to stop after only a minute or two, etc. The list goes on and on. I looked online and there are for sure some things I can do to fix this. The problem? They all take TIME. Anywhere from a few weeks to a few months. And when I sat down and thought about it, I knew I wasn't going to be nursing that long. So I had a really good cry about it, a super long talk with Matt about it, I decided that I wanted to stop nursing. It's something that I struggle with anyway, but add in some issues AND having a 3 year old to take care of, and I just need to make another decision for me, for Cooper, and for my family. That being said, I'm writing this a week later and I'm still nursing. We should start transitioning to formula this week and it'll take a few days to get completely transitioned over.

Sleeping: He really has been doing well with this.  Just like in week 1, he is sleeping well at night.  He didn't do fantastic this week, but I would say that he's doing great simply for the fact that he SLEEPS at night.  He might get up 4 times to eat, but he goes right back to sleep.  That is such a blessing.  I am so happy that he's not up for hours every night trying to be awake.  He still basically sleeps for about 95% of the day, but we tried our best to start a eat-wake-sleep cycle.  For a lot of the day, he would just eat and then sleep, but we would fit "awake" in there when we could.  He is a VERY sleepy nurser, and we had to start changing his diaper in the middle of him eating just so that we could wake him up enough to finish eating!  I did notice two things about him this week: 1- he sleeps MUCH better when we leave him alone (ie: put him in a swing or lay him down in the pack-n-play to sleep) than if people hold him.  When people hold him to sleep, he rarely sleeps very long and then wakes up wanting to eat, and 2 - he still doesn't really love his paci.  He'll take it eventually if you really work with him on it, but he really doesn't love it.  While we still enjoyed being able to hold him this week (since scheduling doesn't start until after 2 weeks is up), we did try and start swaddling him and laying him down for at least one nap a day just to try and get him ready for next week.  He really didn't mind.

Home boy likes to KNOCK OUT after nursing!

Think he was mad at me about something?

Paci: I touched on this in the sleeping section, but he really doesn't love the paci.  He's had it some, but he doesn't really care for it.  Total, he'll suck on it for just a little bit, and even then he isn't very happy about it.  In fact, he'll frown a TON when you first try and give it to him, and sometimes it'll even gag him.  We tried this week to even give him another brand of paci, and he didn't like that one, either.

Gas:  This was much better this week, too!  I actually stopped giving him gas drops about the first-middle of the week because it didnt' seem like he needed it anymore.  Don't get me wrong, he is still a VERY gassy child, but it doesn't seem to bother him like it did last week.  He will still let out poots that sound like they come from a grown man, and he usually does it as soon as we get a clean diaper on him.  Seriously - almost every single time.  It's pretty funny.  He also is still not a very big burper.  He'll burp some of the time, but it is not very consistent.  Since he's not a huge spitter (at least not yet - fingers crossed!), I typically don't worry about it too much.  If he doesn't burp within a minute or two, I usually just give up.

Other Stuff:
-He has his longest awake time first thing in the morning (sometimes he seriously would stay awake for HOURS until his next feeding time!) and last thing in the evening (from dinner time until after LL went to sleep).
-We have given him a bath three times, but have kind of just taken to wiping him down until he loses his umbilical cord.
-He is such a LOUD baby.  He is super noisy when he eats, and he is super noisy when he sleeps!  It's not unhappy noises, it's just grunting and snoring and groaning.  It's so funny!
-We put him in his travel swing for the first time on July 3.
-We gave him a bottle for the first time on July 4.  He was not crazy about it, but he ate 3 oz and then nursed for about 15 minutes.
-On July 6, we tried a different type of bottle and he liked it MUCH better.  I think the nipple on the other bottle was too fast (even though it was labeled "slow"), and I think that's why he liked the other brand better.
-On Saturday and Sunday (July 7/8), he must having been going through a growth spurt because any semblance of a schedule that we had going on went out of the window.  He was super hungry 30 min - 1 hour before his typical time to eat.  I googled it and it said that babies go through a growth spurt sometimes in weeks 1-3.  Totally makes sense. 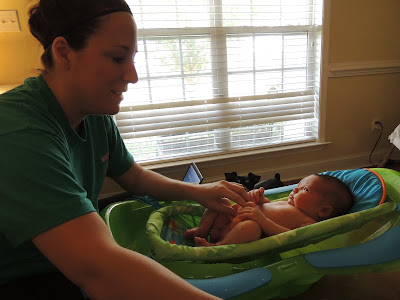 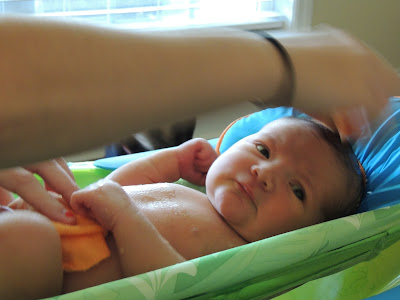 First time in his travel swing! 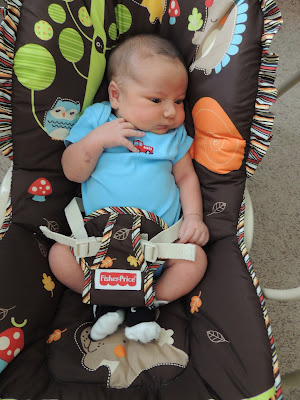 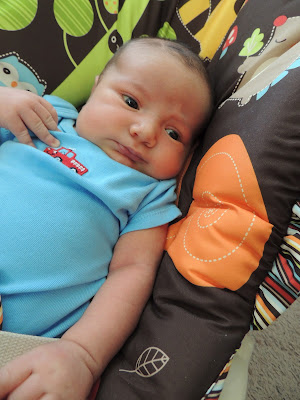 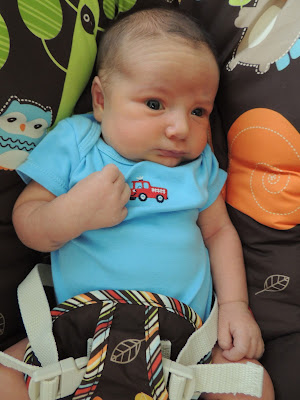 LL decided to do tummy time, too, but she had to "bite her arm" like she thought he was doing.  Silly girl. 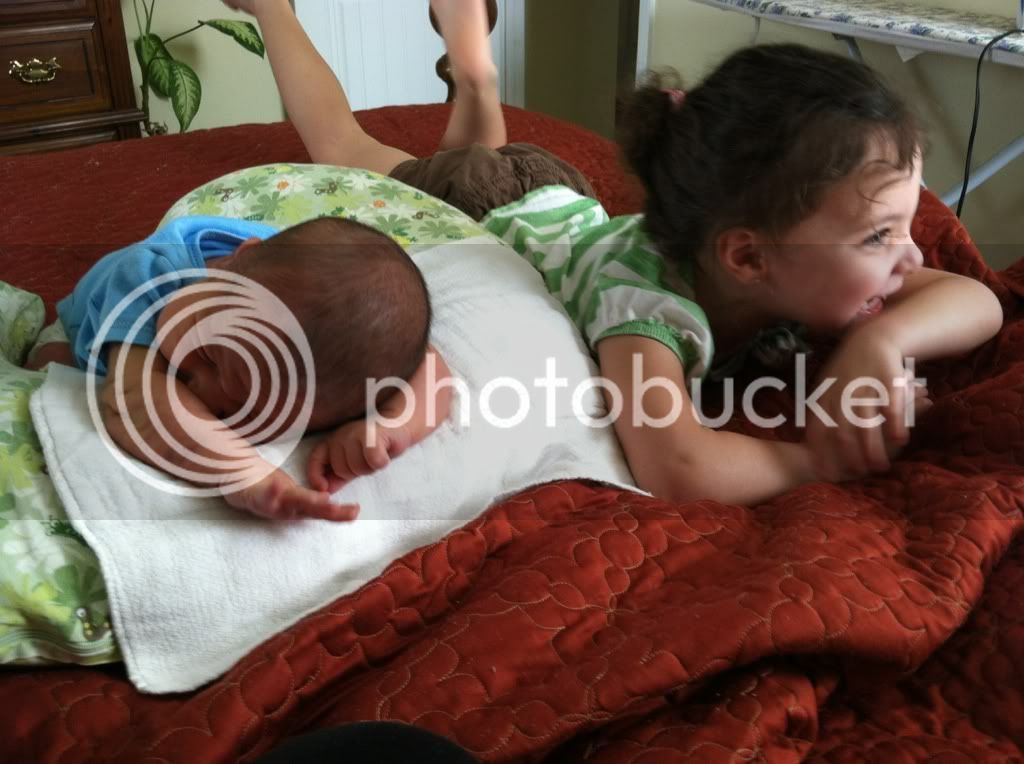 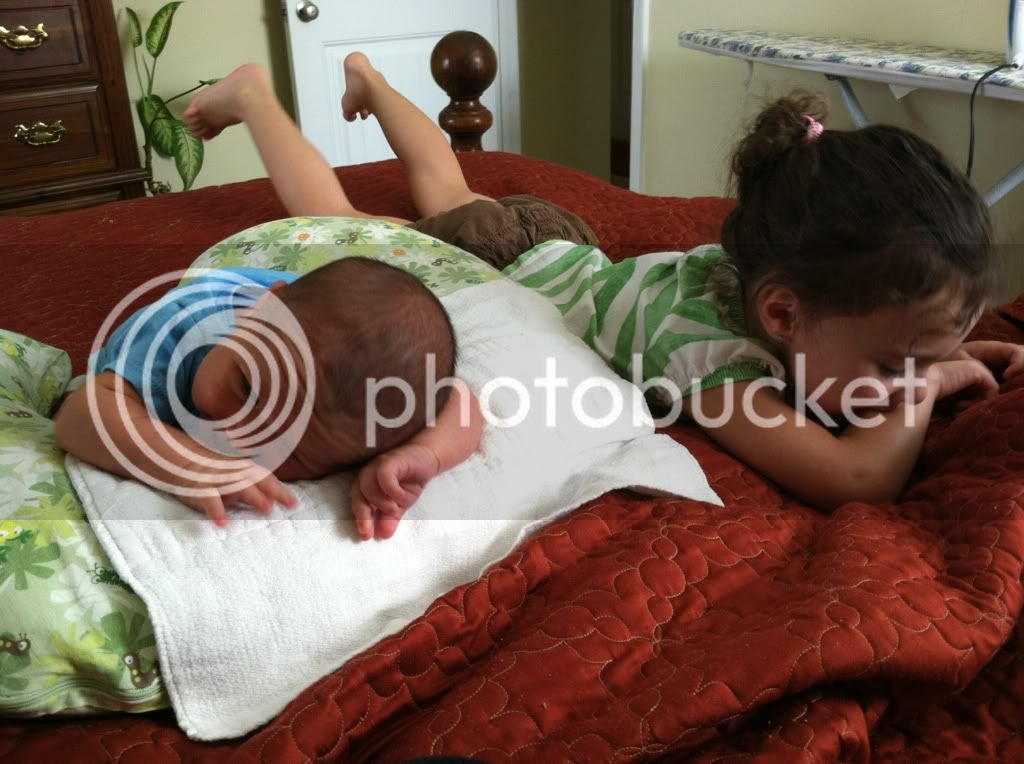 Lorelai:  Lorelai is still doing great with him.  I am so impressed with how well she has handled him being her all of the time.  I really was waiting for her to say something to the effect of, "Okay - when is he leaving?!"  but she hasn't.  She's not always super involved, but she's always sweet to him.  She likes to look at him when he sleeps.  She likes to rock him when he's in his swing.  She likes to watch us change his diaper.  She's VERY protective of him and will let us know quickly if he's swinging "too hard".  She still calls him "Baby C", but she knows that we call him Cooper.  She'll say his name, but only if we ask her to.  She doesn't call him that on her own.

She still is having a hard time with obeying us.  That's the biggest way that she's "acting out".  We're working on it and trying to give her more attention when we see that she's really going against what we're asking her to do.  Towards the end of the week this really started to get better.  Overall, though, I've been so impressed with her and how she's handled this transition.

I left Cooper inside with Grammy one morning so that I could spend some time with LL outside before it got super hot.  We hadn't even made it out of our pj's yet.  :)

Luckily, she still asks to hold him a ton!

Me:  I really started to do a lot better this week.  Weight wise, by the end of this week, I was 1/2 lb DOWN from my pre-pregnancy weight.  Um - AWESOME.  My stomach is still having to take time to shrink down, but at least the number is down!  Hopefully I'll keep losing and end up with a smaller number than what I started with!


I know that there is FOR SURE still a bump there, but considering how big I was at the end of my pregnancy, I don't think this looks too bad for two weeks out.

Finally, towards the end of the week, my appetite started coming back.  Up until this point, I never really got hungry during the day.  I would make myself eat, but I never really ate a lot and nothing was super fantastic.  I did notice that I would get SUPER thirsty at the end fo the day during my last nursing session before putting Cooper to bed for the night.  And I would get super thirsty during his middle-of-the-night nursing sessions.  I don't know why it was happening most at night, but it was pretty consistent every night!

As far as recovery has been going - that has been great.  My bleeding has been super minimal and is almost non-existent.  I also noticed that some of my stitches were coming out this week (they are the dissolve able kind - so that's okay).  I dealt with a lot of engorgement this week, but I usually would just pump whenever it happened.  I started to get a good bit of milk during these sessions - usually about 6oz total.

Mentally I've been still doing pretty good.  I broke down on Sunday for most of the day, but I really think that's because Matt was leaving on Sunday to go out of town for two days.  I was DREADING this and super nervous about not seeing him.  I had help coming over to stay with me (even at night), but I was a crazy emotional mess all day on Sunday.  I still had a few "oh my God" moments, but they really haven't happened a ton.  I'm SO thankful that (so far!) I haven't had any of the crazy issues that I did with LL.