I'm going to be honest: potty training is not my favorite thing ever.  When I potty trained LL, Matt was out of town for the week, so I did it 100% on my own.  And it was awful and I hated it. LL did great with it, though.  She was just a hair shy of 2.5 years old.  By day 3 of the process, she was still having accidents some, but she was in panties full time and doing a mostly great job.

When it came to Cooper, we put off potty training for a while for several reasons.  Mainly two.  1 - speech, and 2 - timing.

I know speech seems like an odd reason, but it's really not if you think about it.  If you can't tell someone you need to potty (because you can't communicate it with words), it's going to make the whole situation a lot harder.  Since I knew that the speech was coming (it's not like he permanently couldn't talk), I decided to just wait until he could communicate with us like he needed to.

As far as timing goes, I have to plan potty training around my schedule at school.  Most of the potty training needed to fall on our shoulders (meaning - I wasn't going to ask Grammy to do all the work for us), and there aren't many opportunities for that for me during the year.  Cooper was showing signs around the beginning of December that he was ready for potty training and that his speech was where it needs to be.  The only time that I could have done it over December was Christmas break.  And there was no way I was spending my Christmas potty training.  The next break I had was a week long Winter Break in February.  Bingo!  Matt also had a few days off that week, so it made it a perfect time to get the ball rolling (and with help this time!)

We planned to start on Saturday at the beginning of Winter Break.  We planned for LL to spend 3 days with grandparents (fun for her, more focus for us on Cooper).  And by starting on Saturday, Matt would be home for Saturday, Sunday, and Monday before having to go back to work on Tuesday.  It seemed like a win-win!

The Friday night before we started, we went to Target and stocked up on undies (Lightening McQueen, of course) and potty snacks (gummies, or "bummies" as Cooper calls them).

Just like with LL, we loaded him up with juice and watched lots of movies.  Keeping him contained in the living room was the best option because we have wood flooring (we rolled the rug up), and it keeps him in a more contained area. 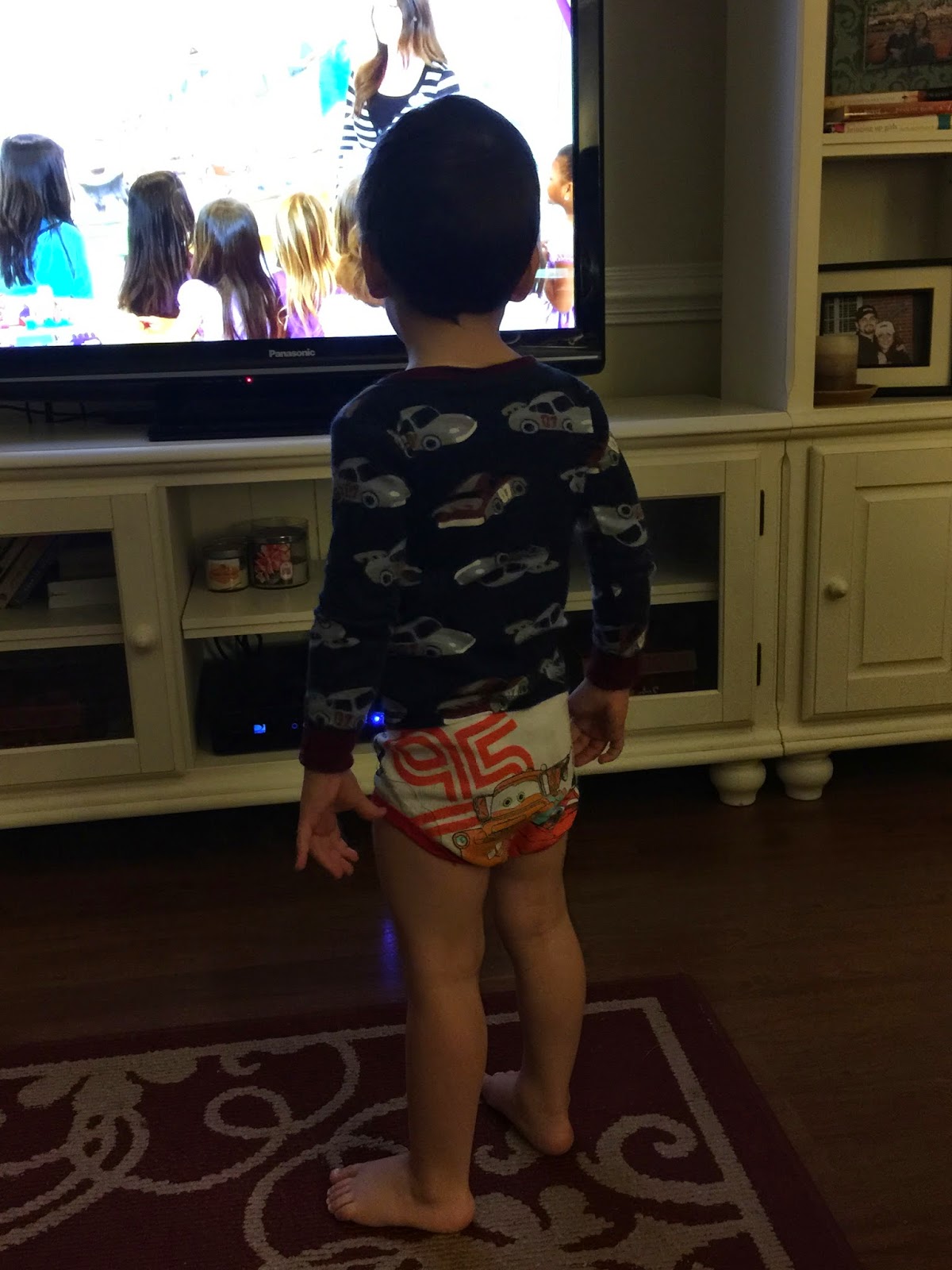 It took a few misses on the floor, but he did catch on pretty quickly that he needed to go pee pee in the potty. 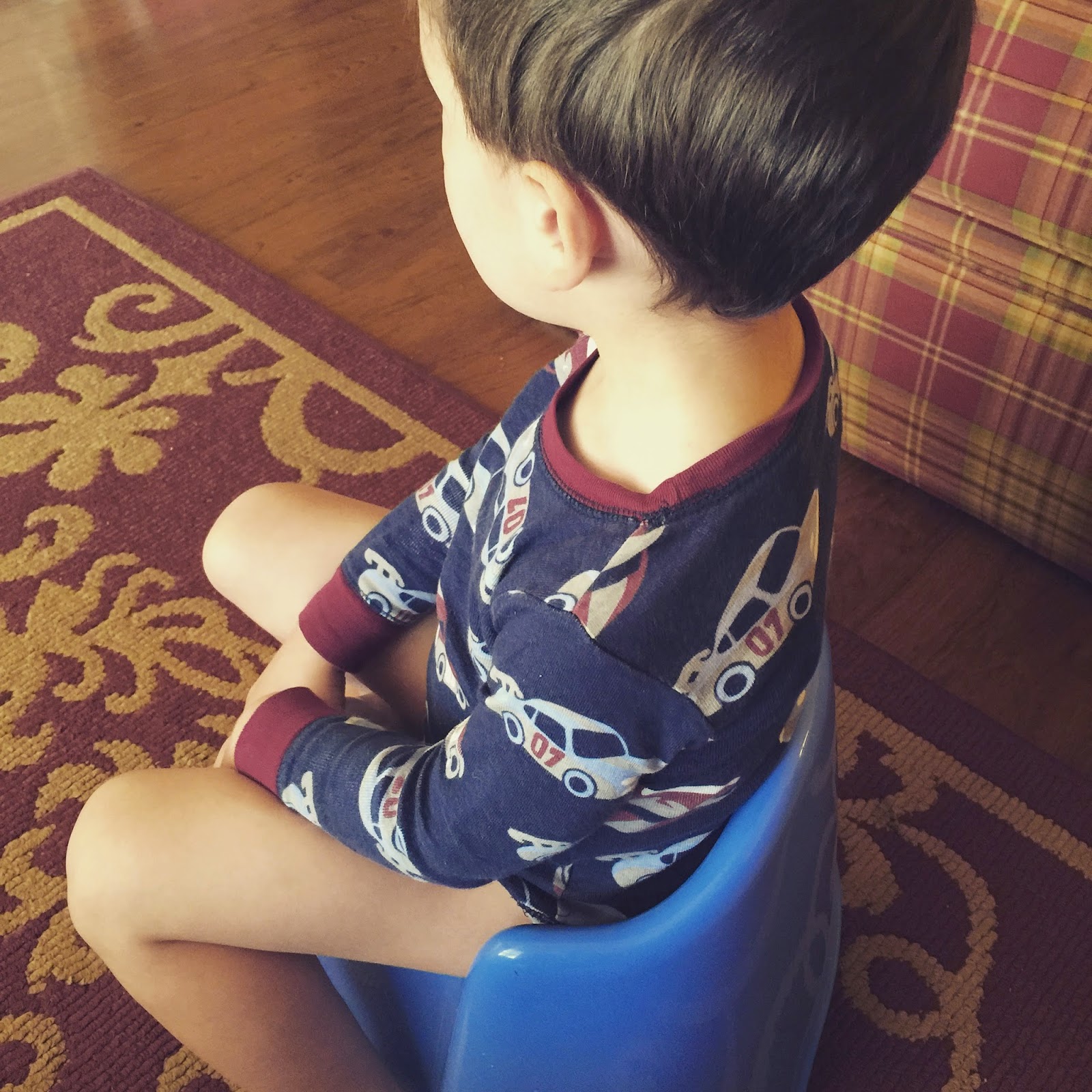 Playing cars and sitting on the potty - haha. 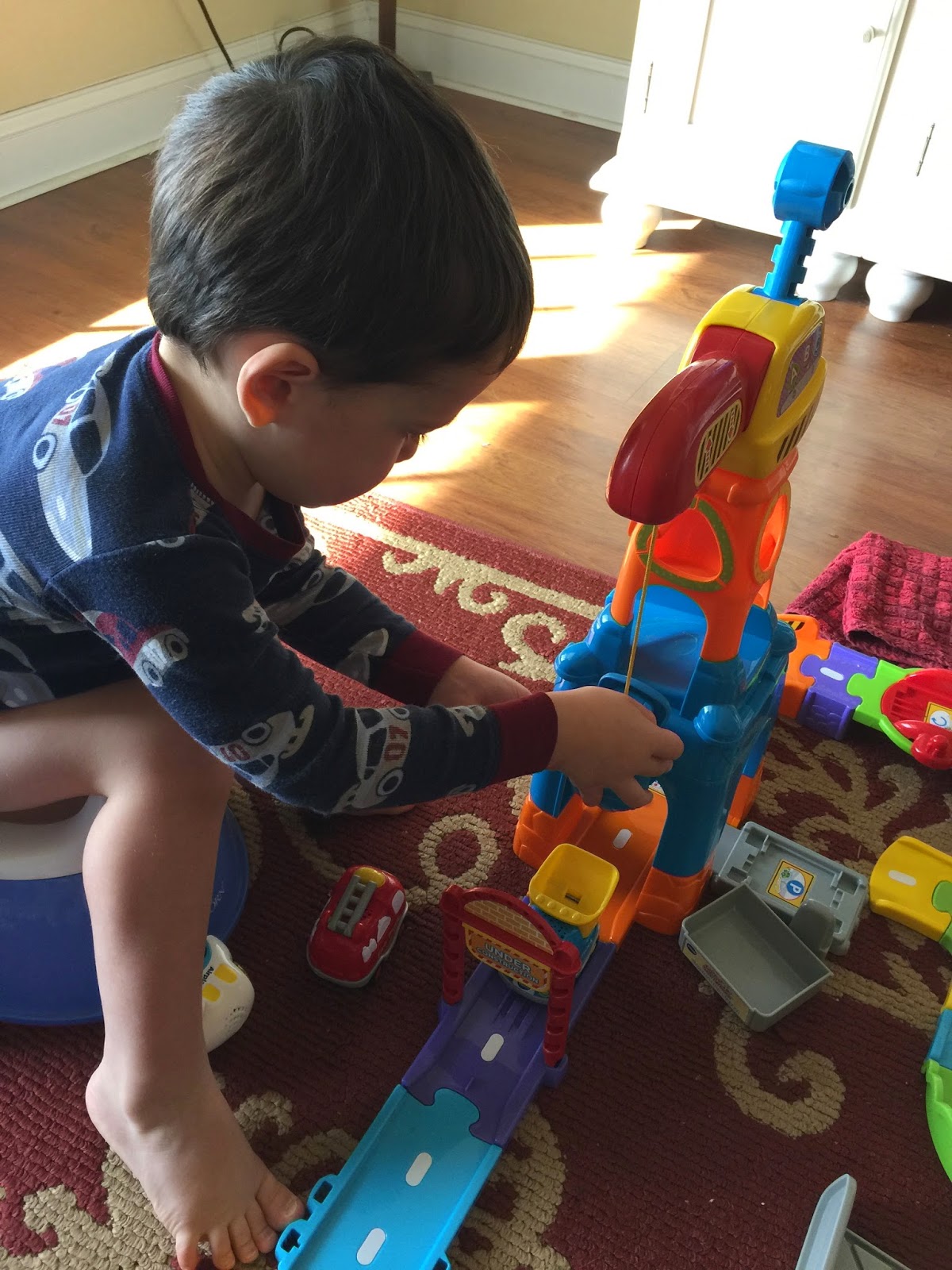 We also realized very quickly that Cooper does not mind peeing in his underwear.  Just like LL.  So we quickly switched over to the naked approach! 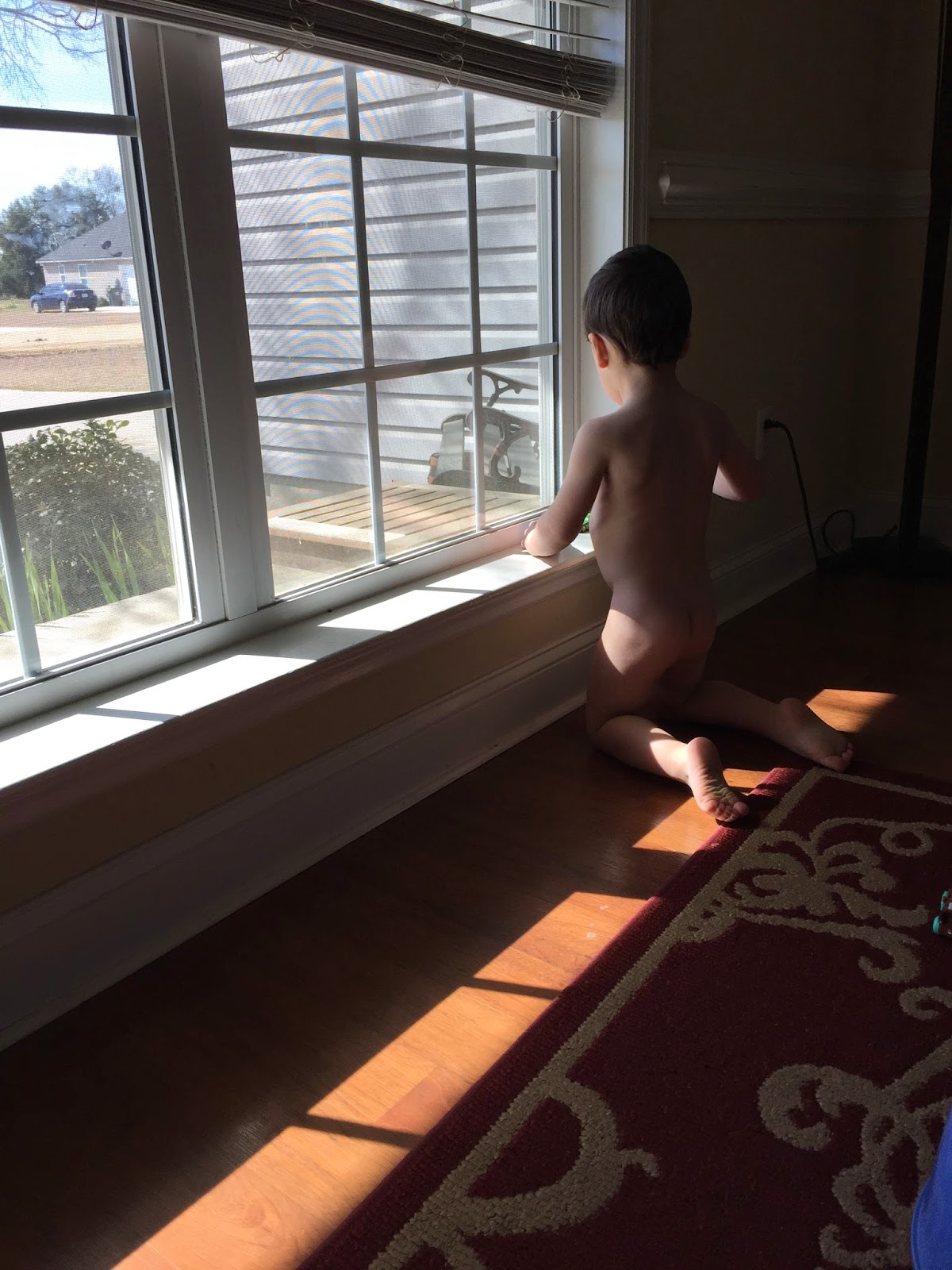 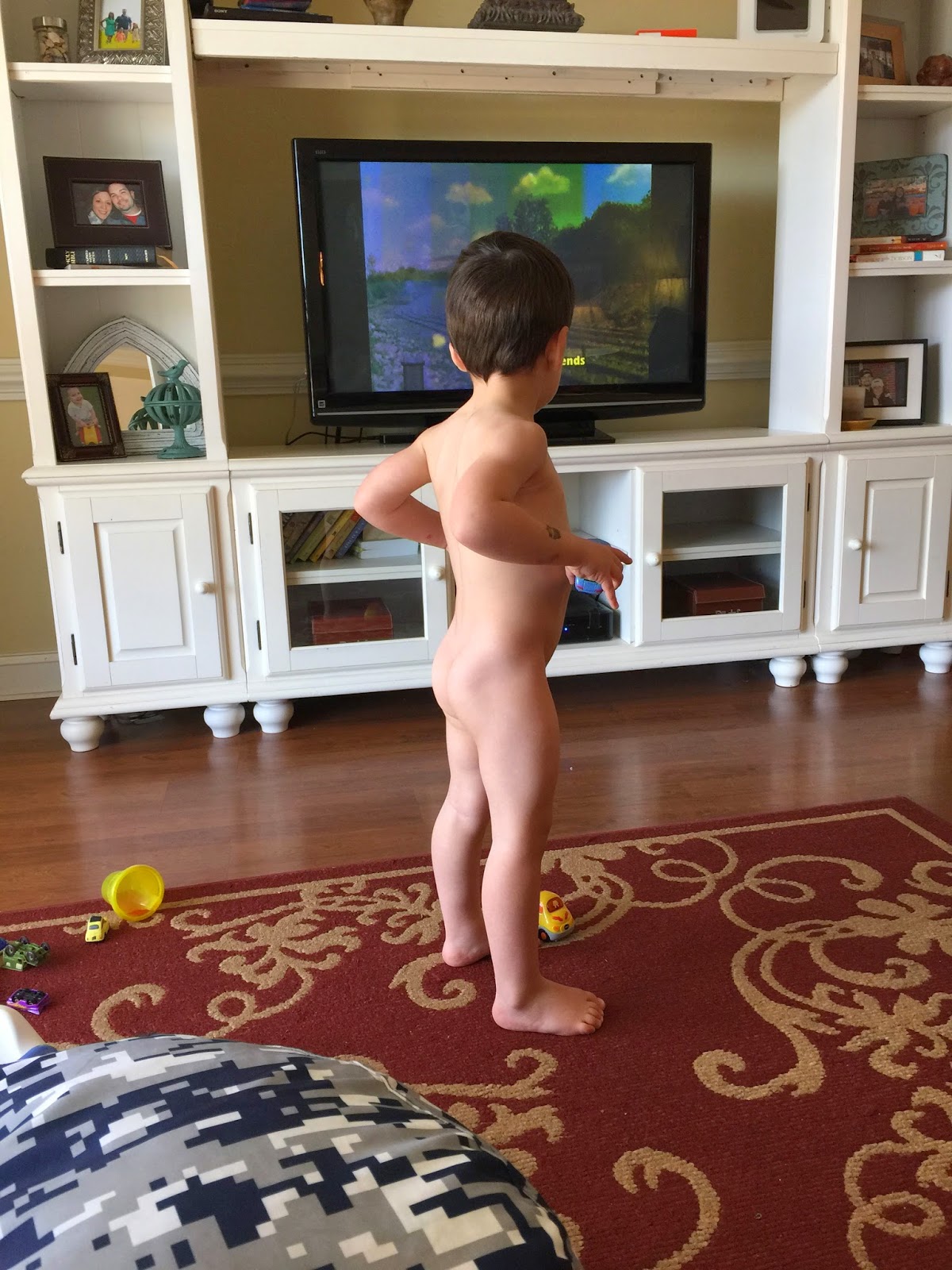 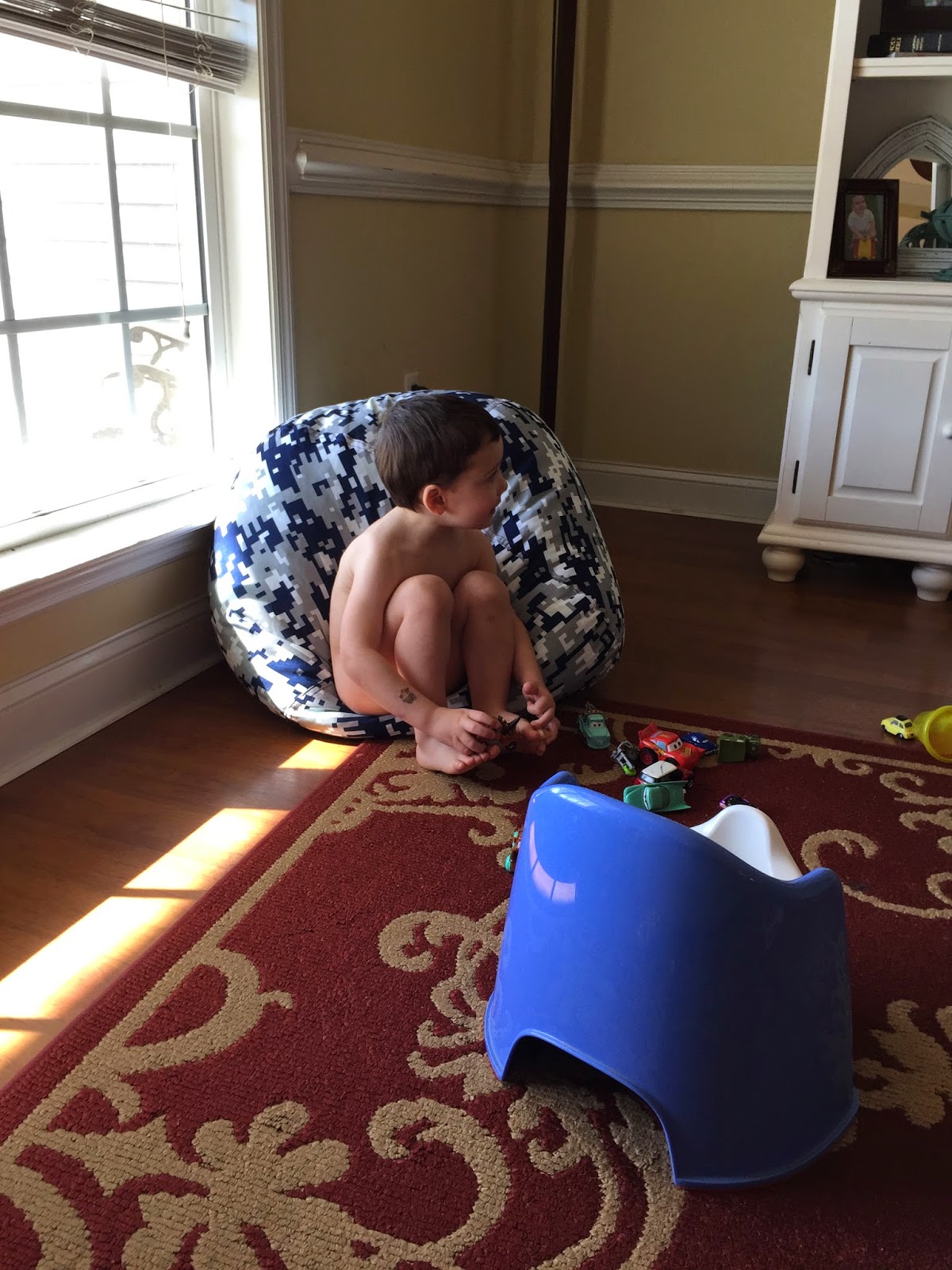 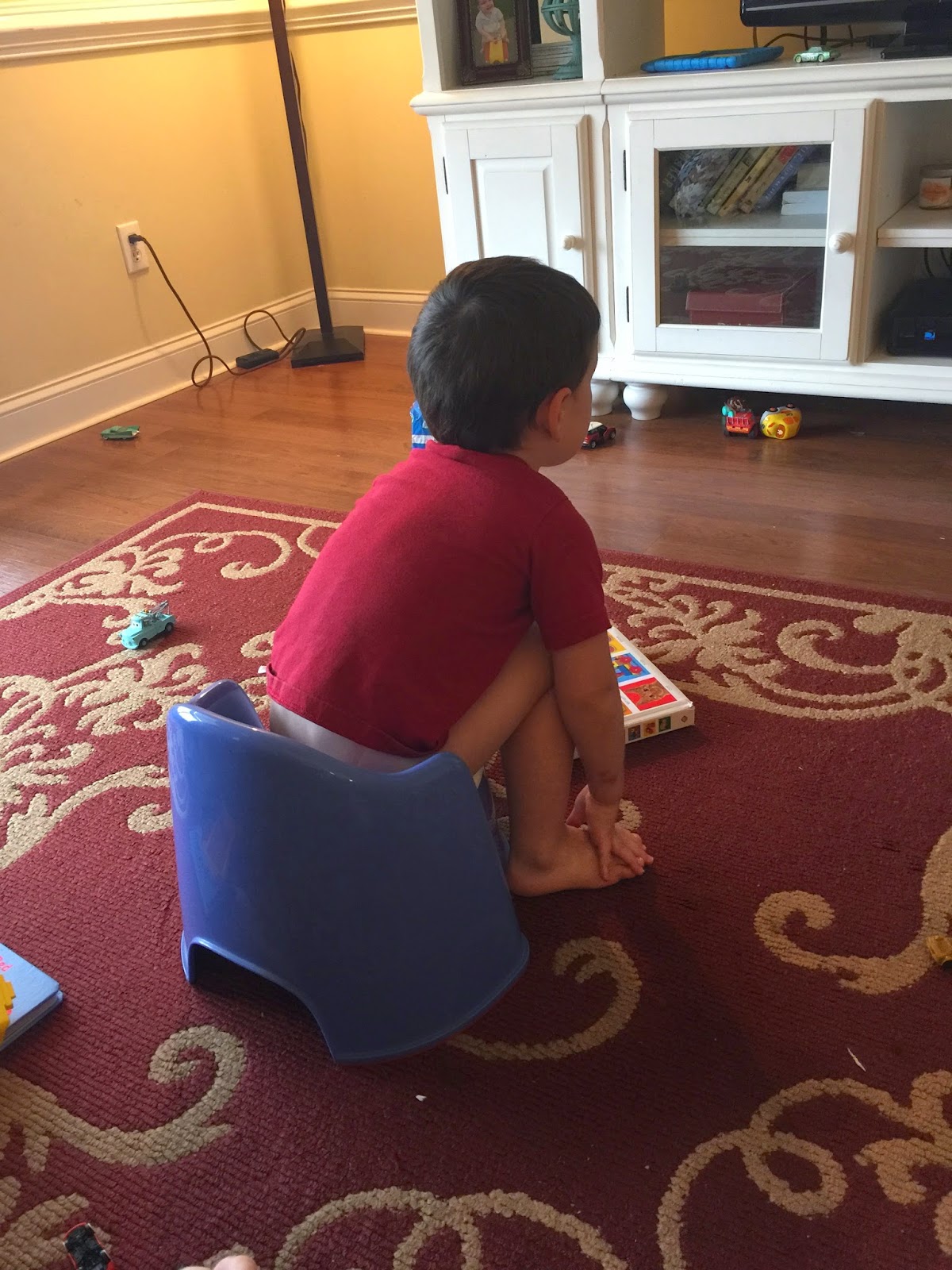 Lucky for us, the weather turned out to be pretty terrible.  If you have to stay inside for days and days and days, it at least makes you feel better to know that it's cold and rainy outside (and that you would probably be inside anyway). 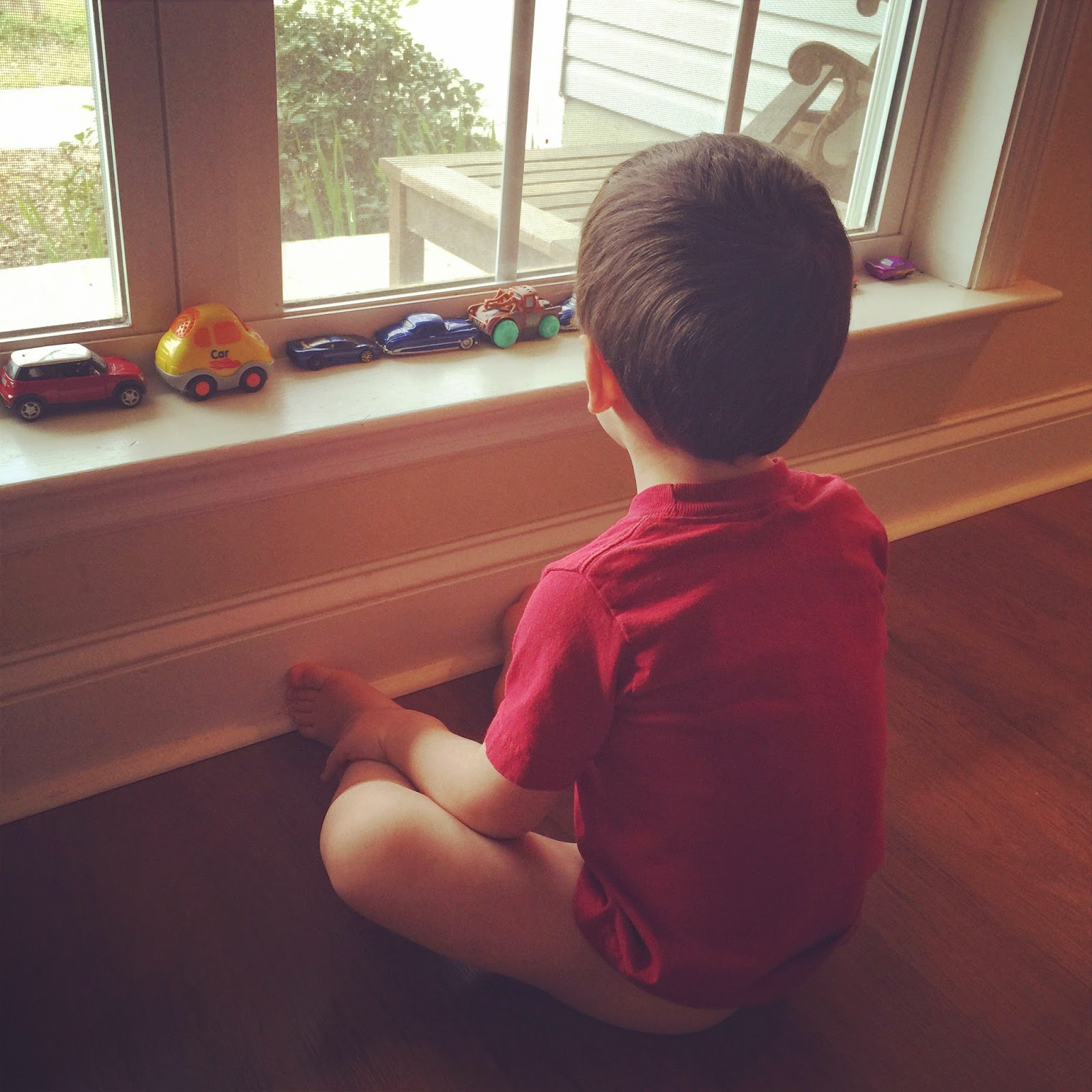 I downloaded several letter and counting apps, so that at least he was getting some great learning time in on the iPad. 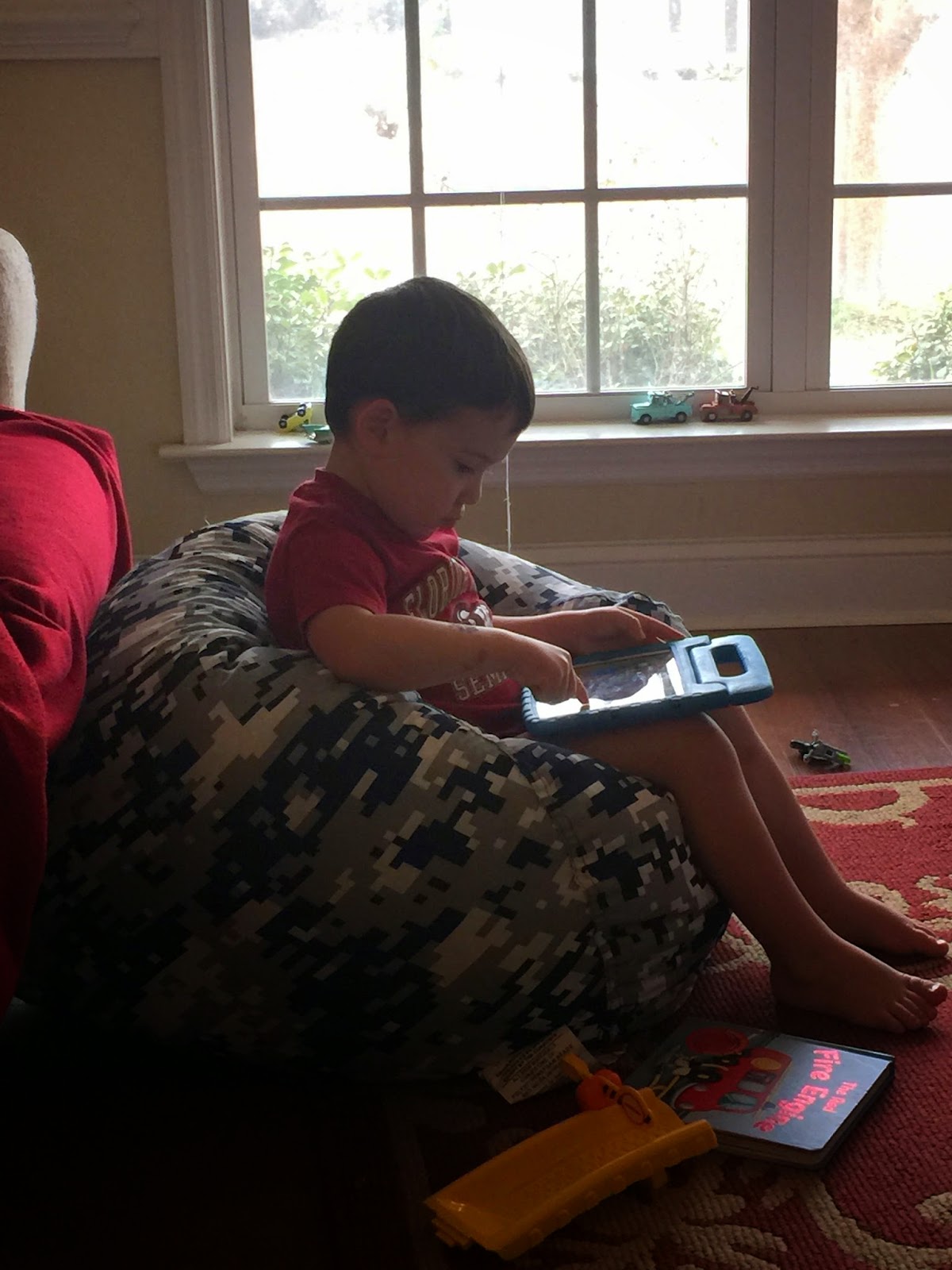 Sitting on the potty, playing the iPad, and eating a snack.  Totally normal. 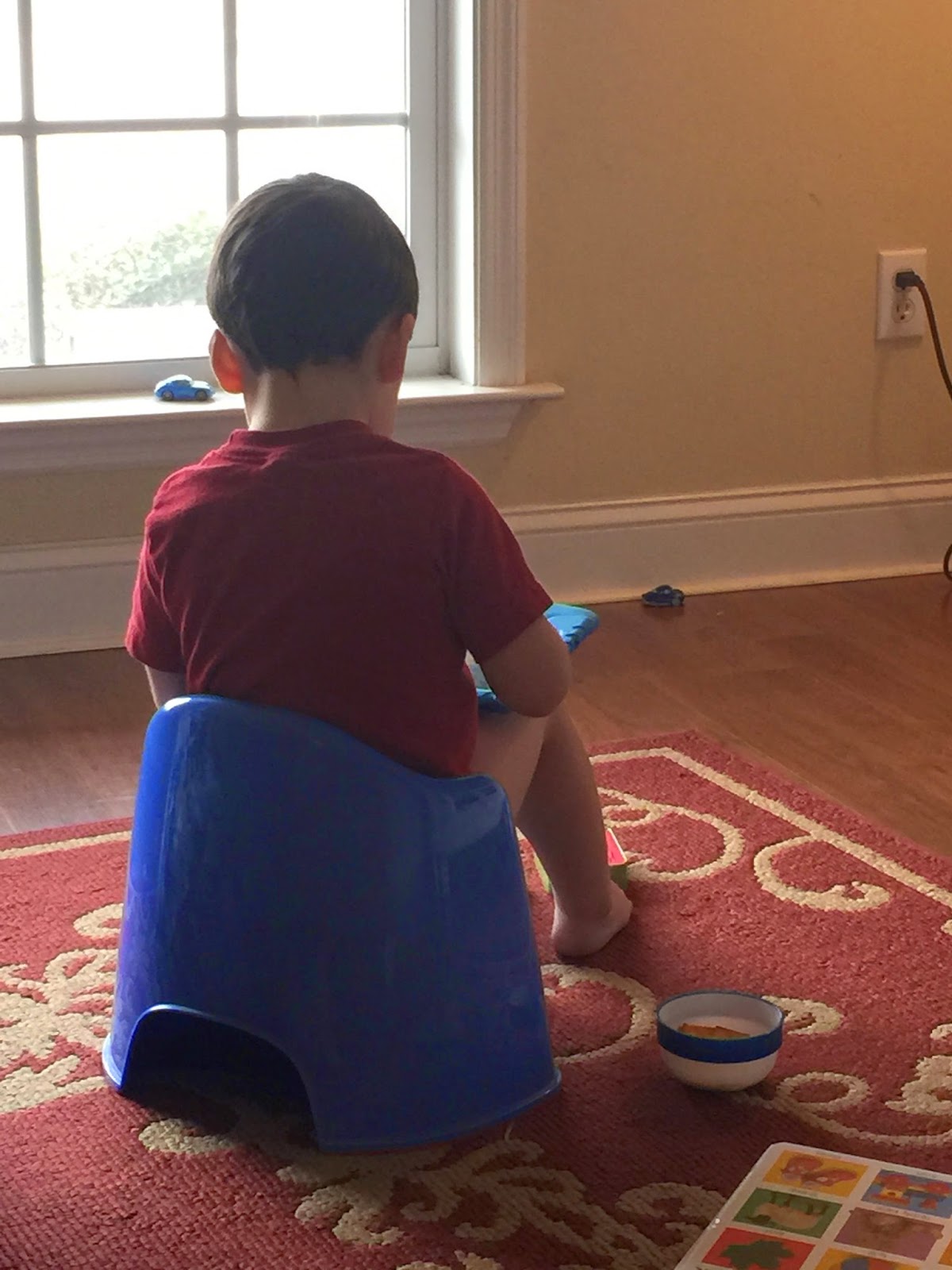 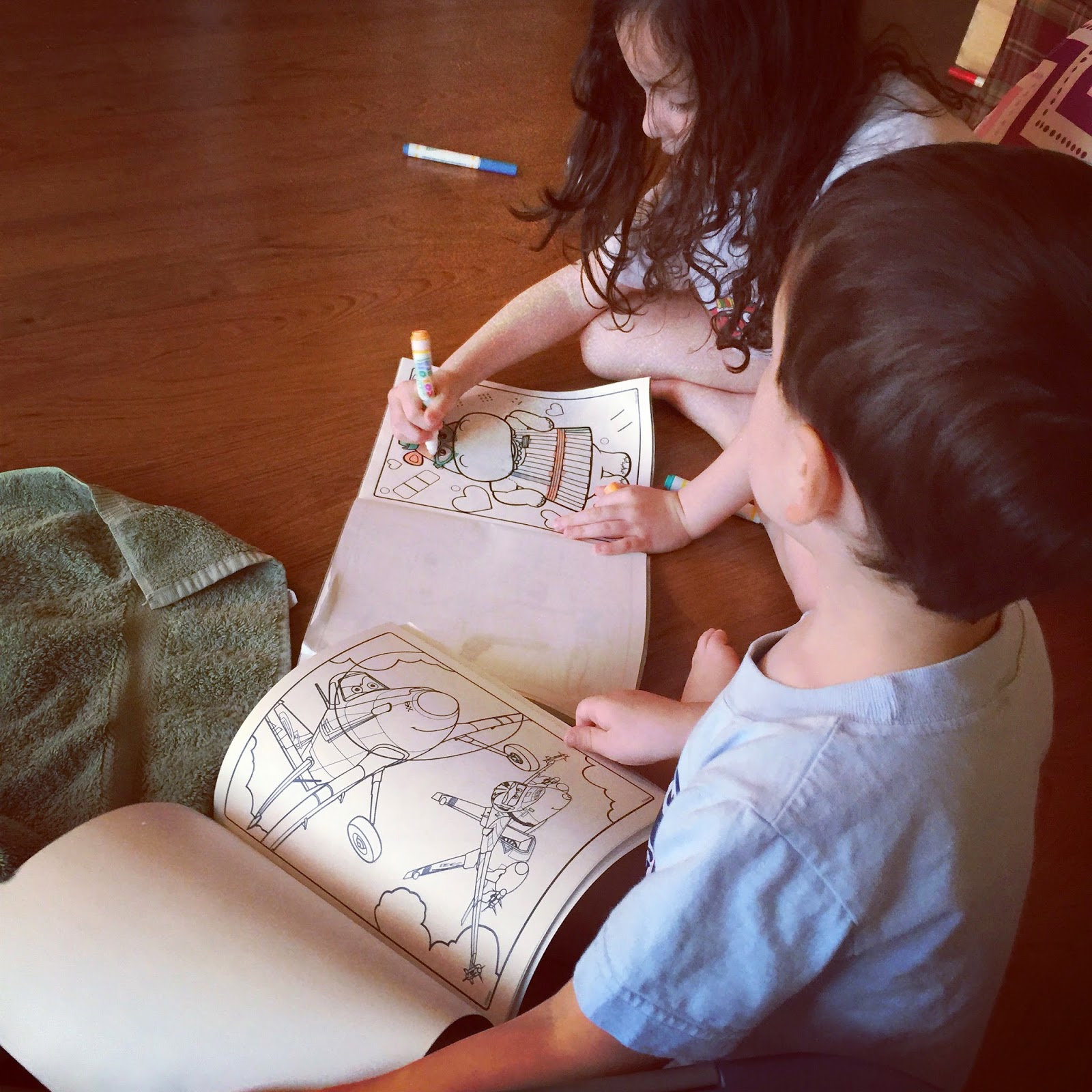 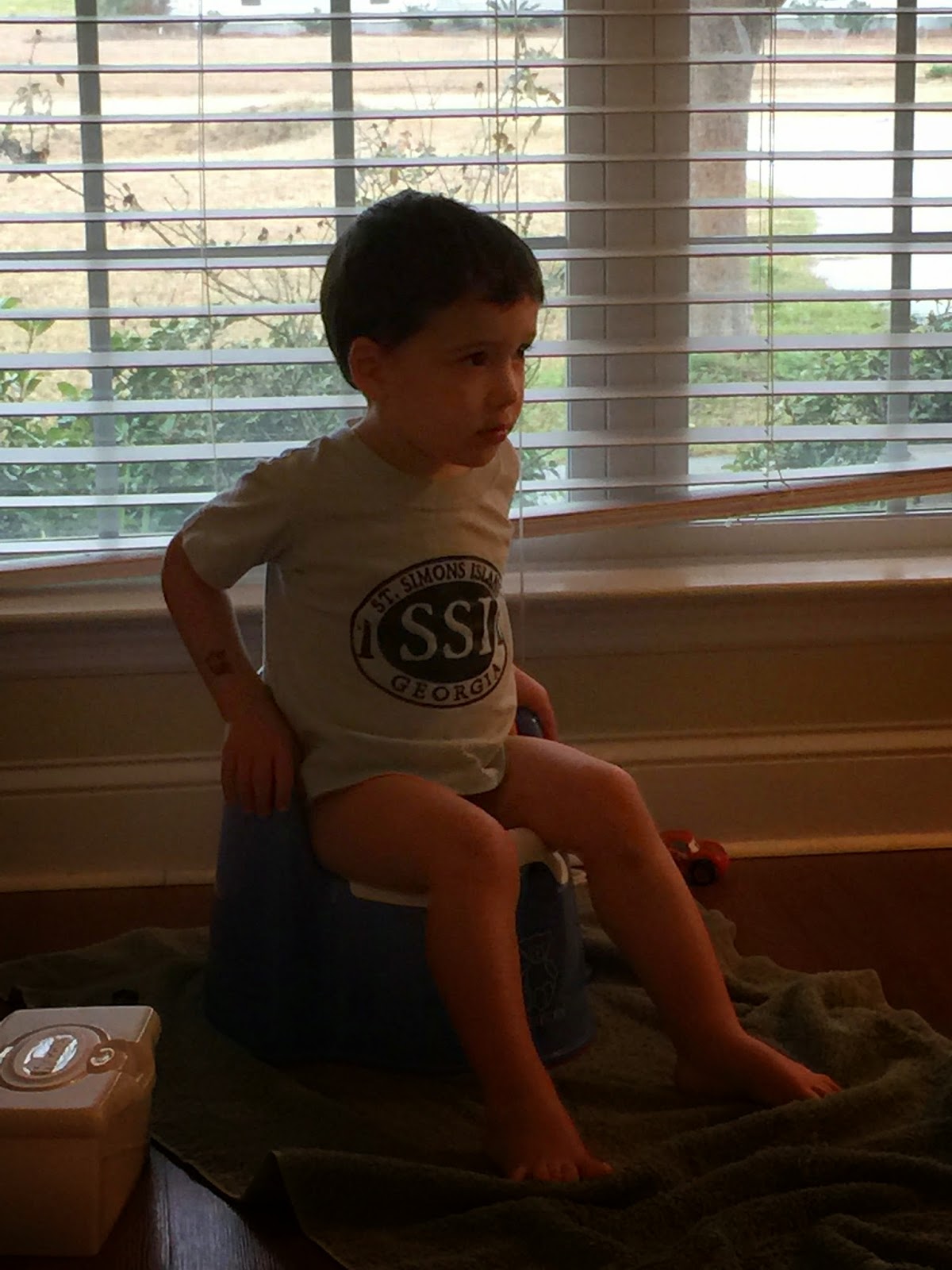 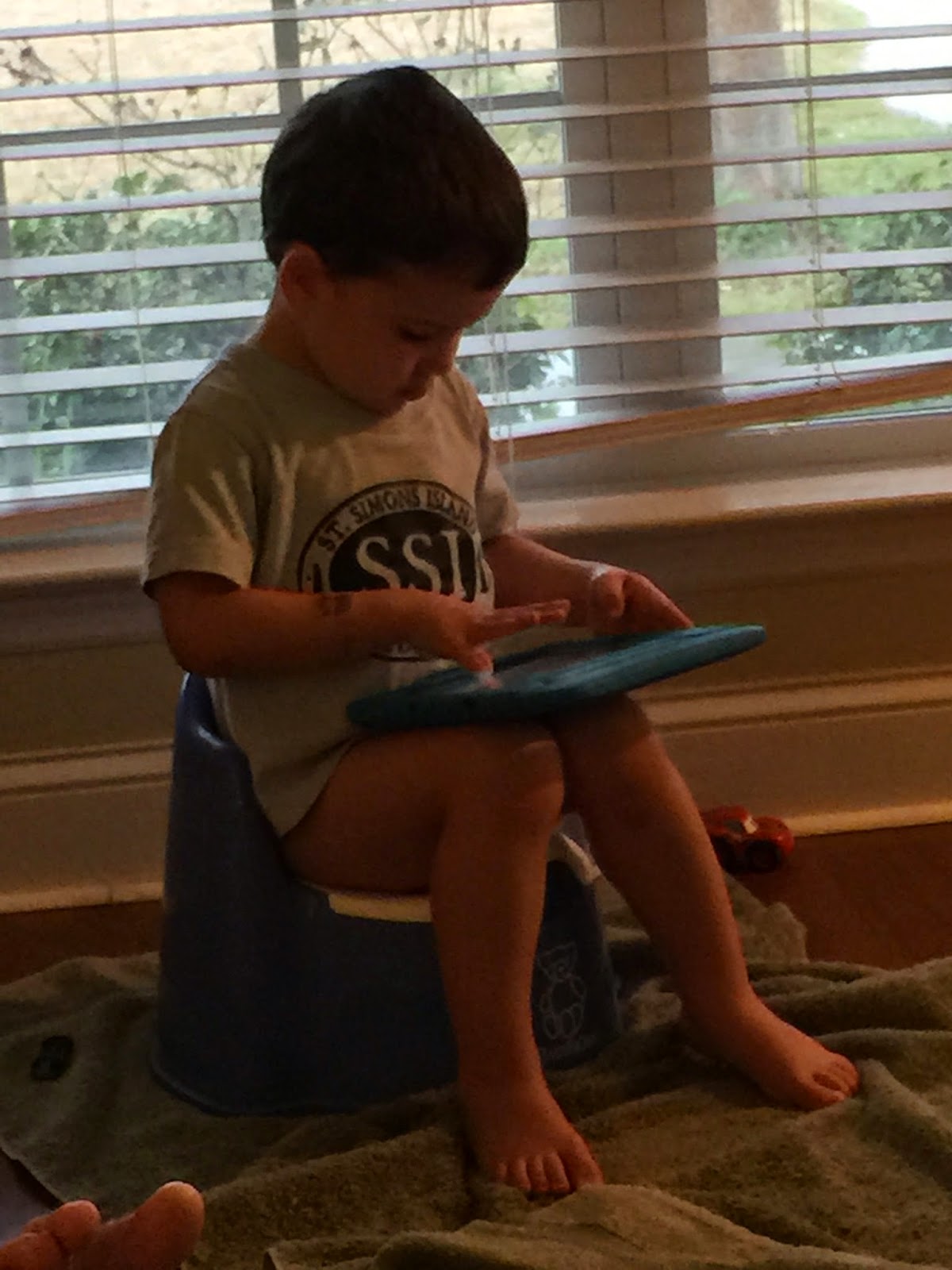 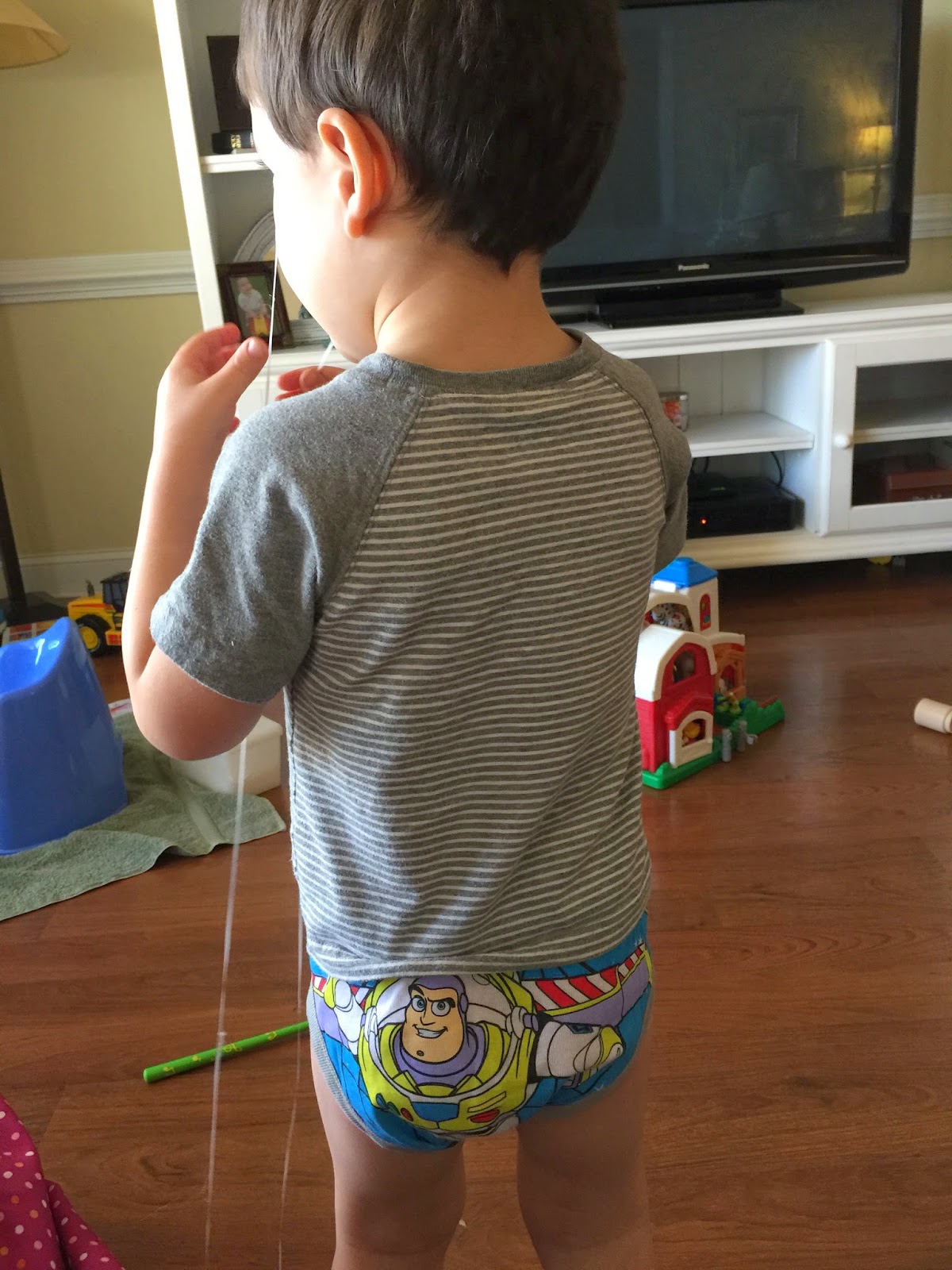 While he was in the bath one night, he told Matt he had to pee pee.  Matt pulled him out, put him on the potty, and wrapped him up! 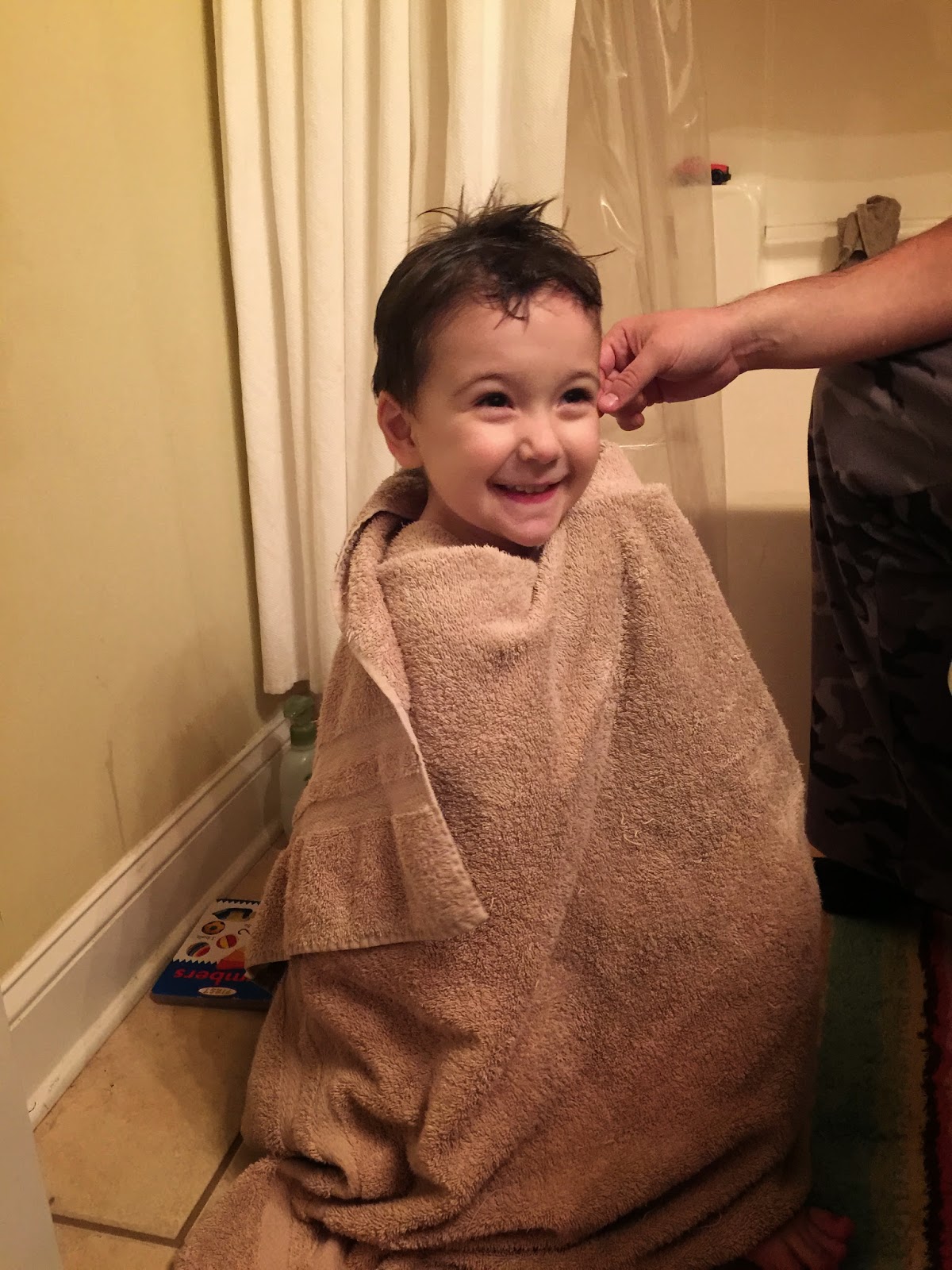 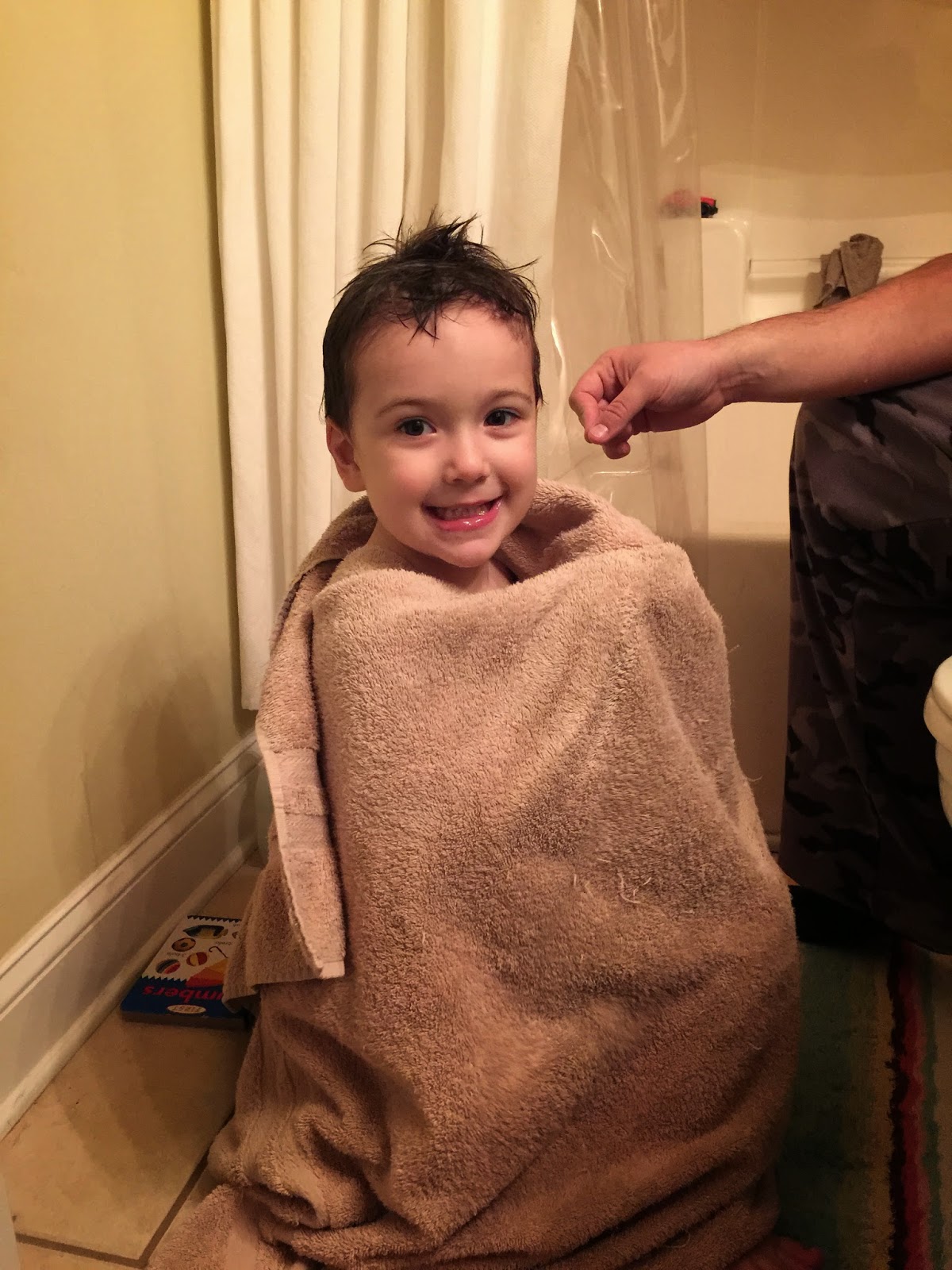 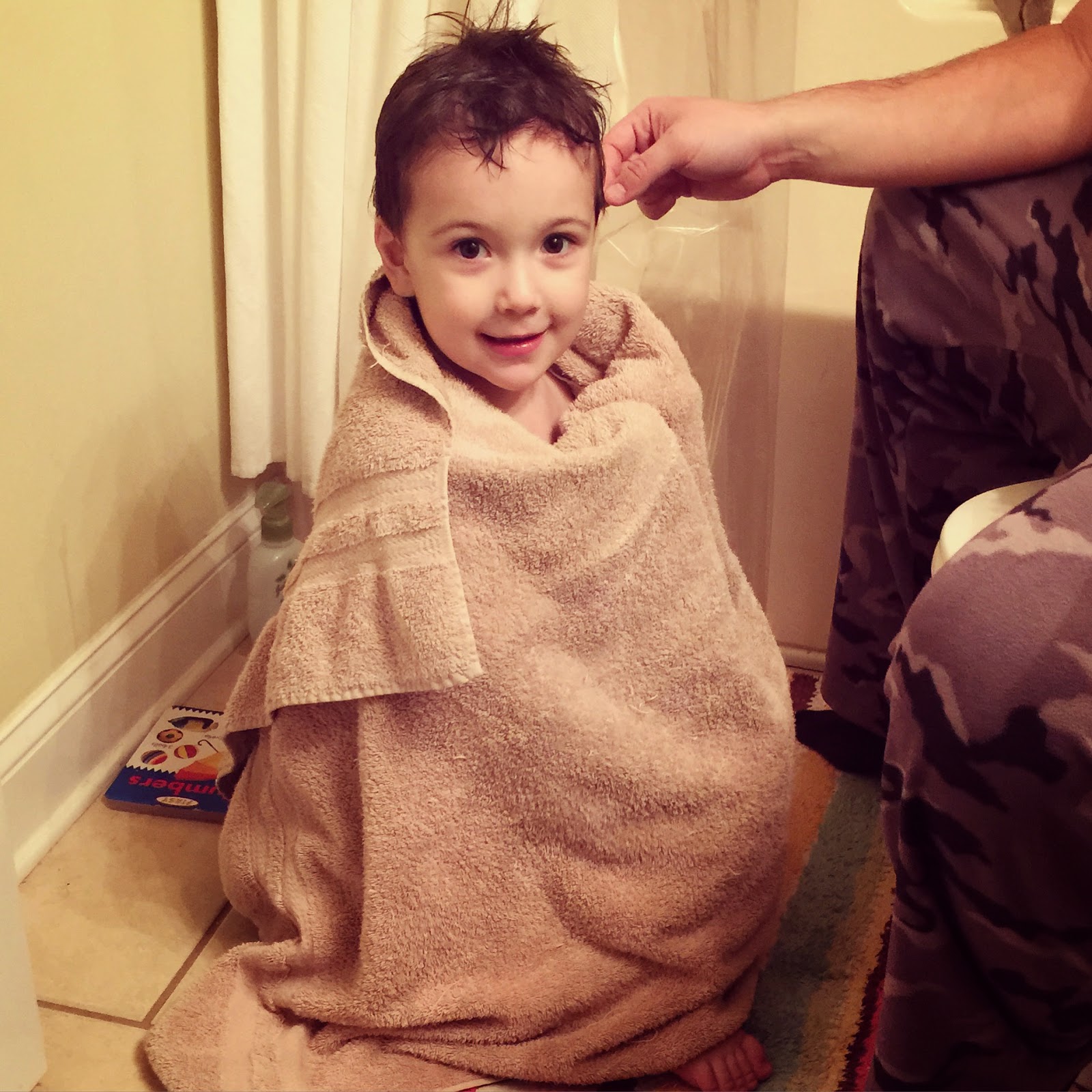 More snack and movie time.  The bean bag was also a lifesaver.  He could sit on something comfy without me having to worry about him peeing on the couch. 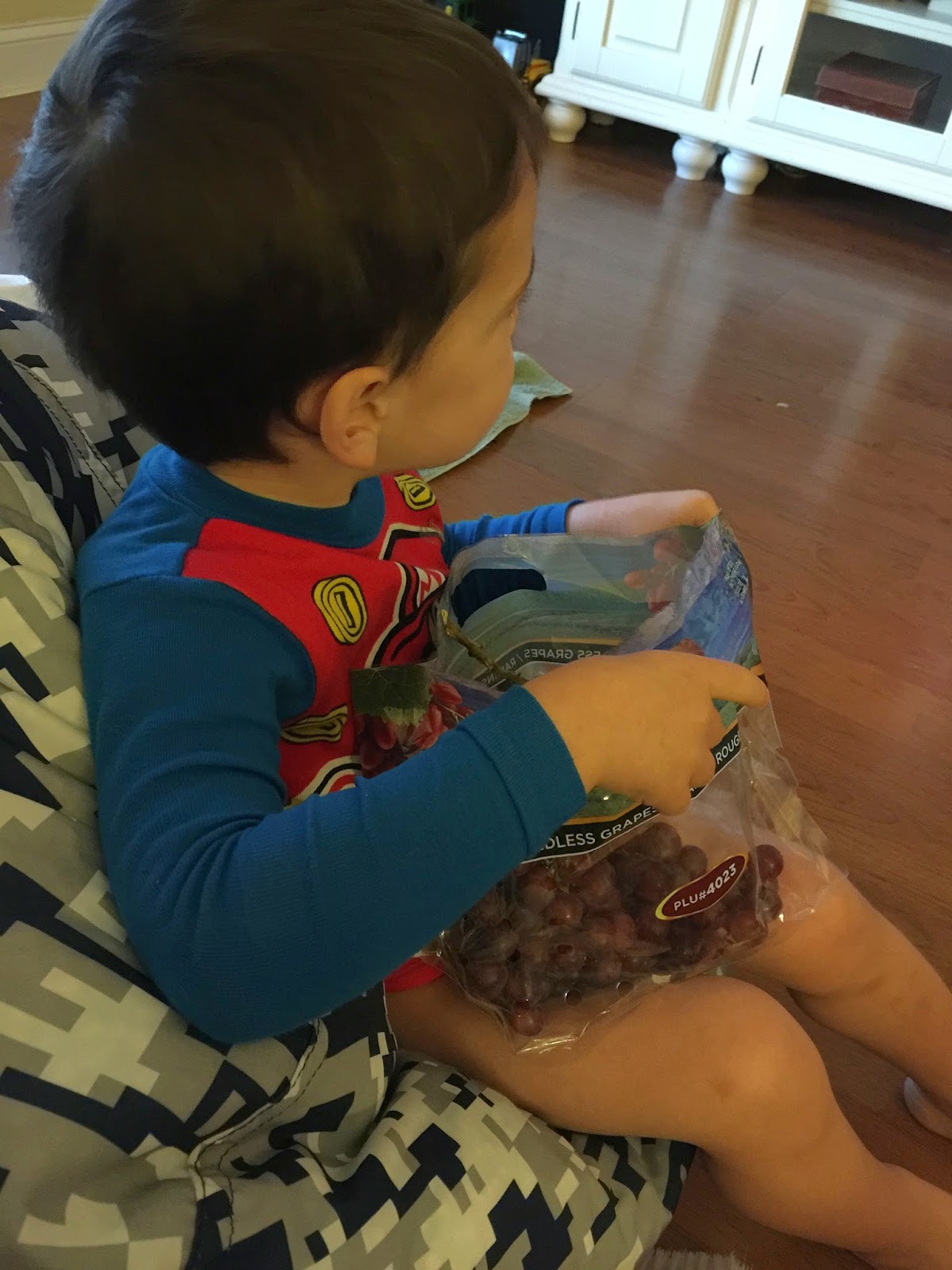 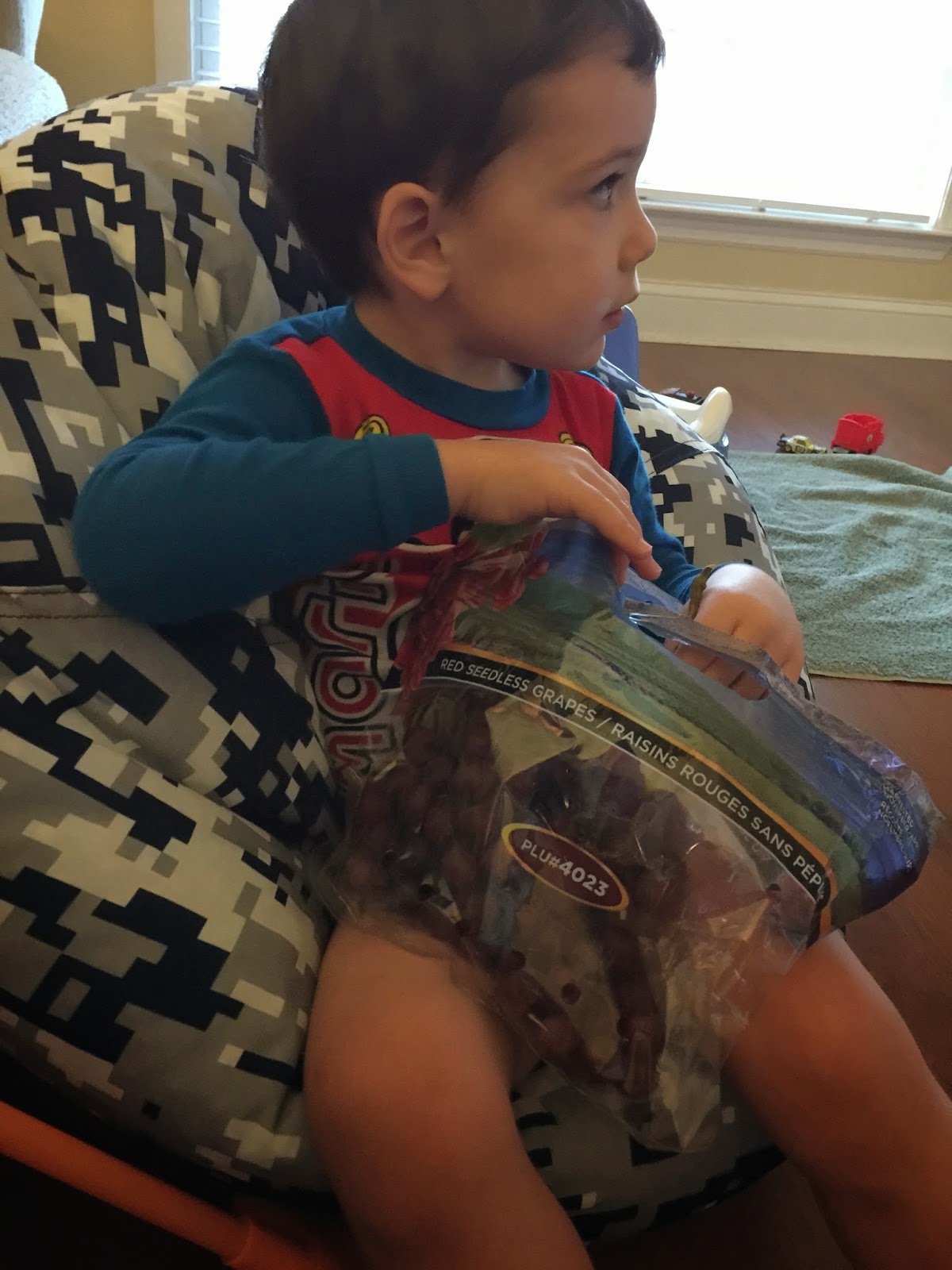 After 5 days of being inside, you'll do anything for fun. 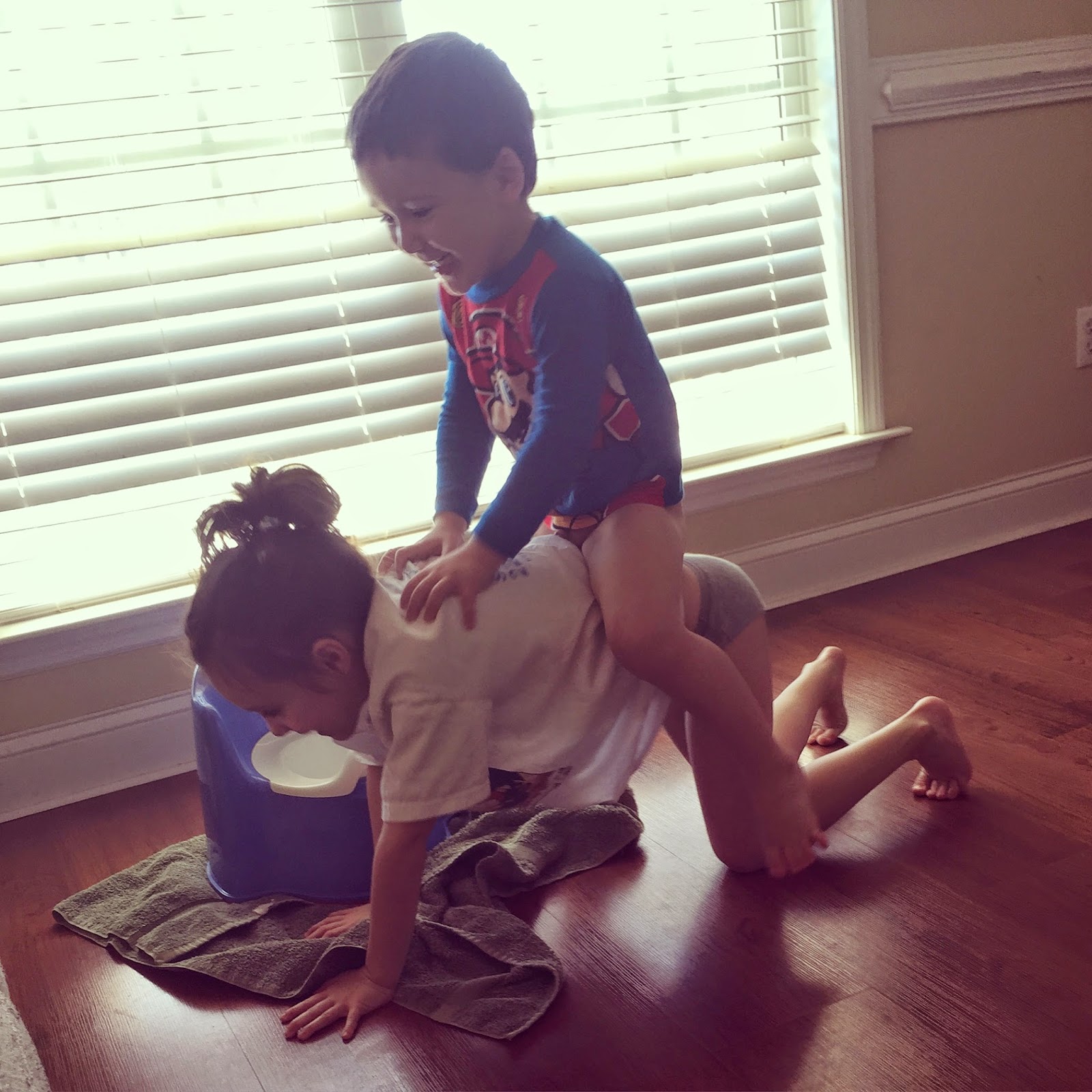 After a full week of potty training, Cooper was doing good, but not quite as good as LL had done.  Maybe it's a boy thing?  Maybe it's because of his laid back personality?  I have no idea.  There were two major things I learned about Cooper and potty training:
1-He will not go potty when you tell him to.  He might sit, but he will not go.  The only time he will pee or poop is when he knows he has to go.  Asking him to sit doesn't do anything but make him (and me!) frustrated because he won't do it.
2- Underwear is an issue.  It still is (at the end of March).  He is MUCH more likely to have an accident if he's in underwear.  It's like it feels the same in his head as diapers do, so he just goes.  That is slowly getting better, but VEEEEERY slowly.

Who says you can't have a party on the potty? 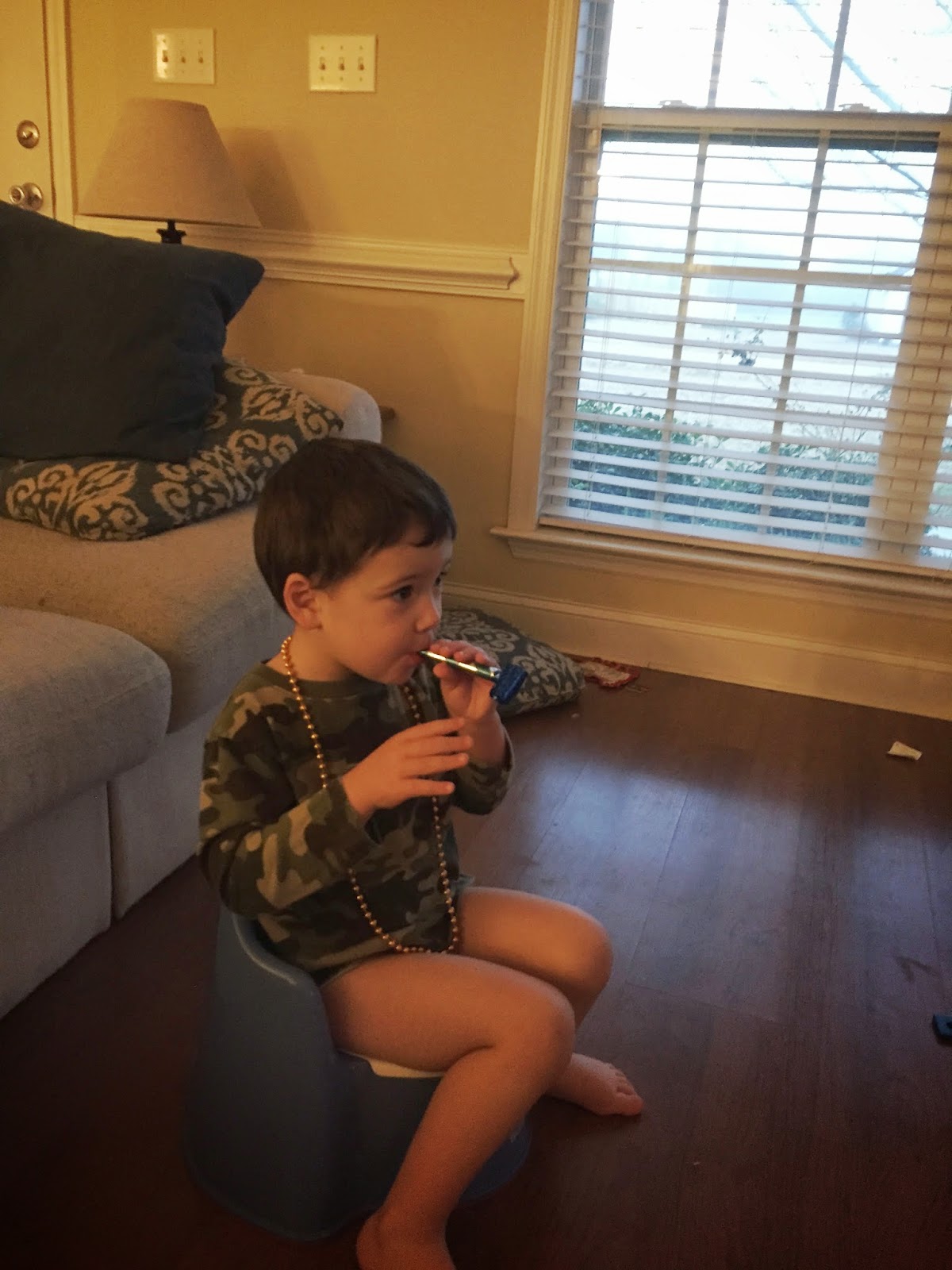 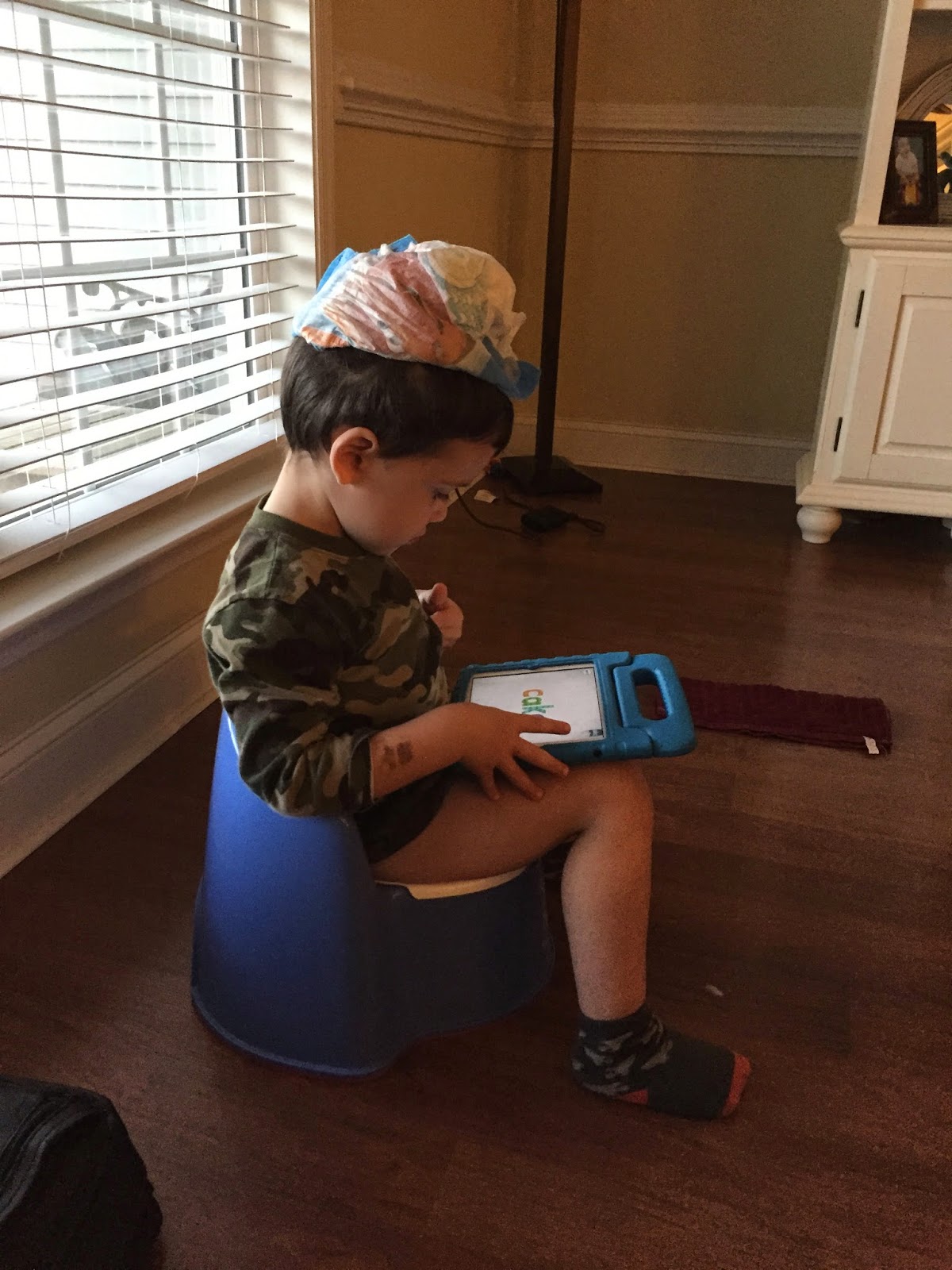 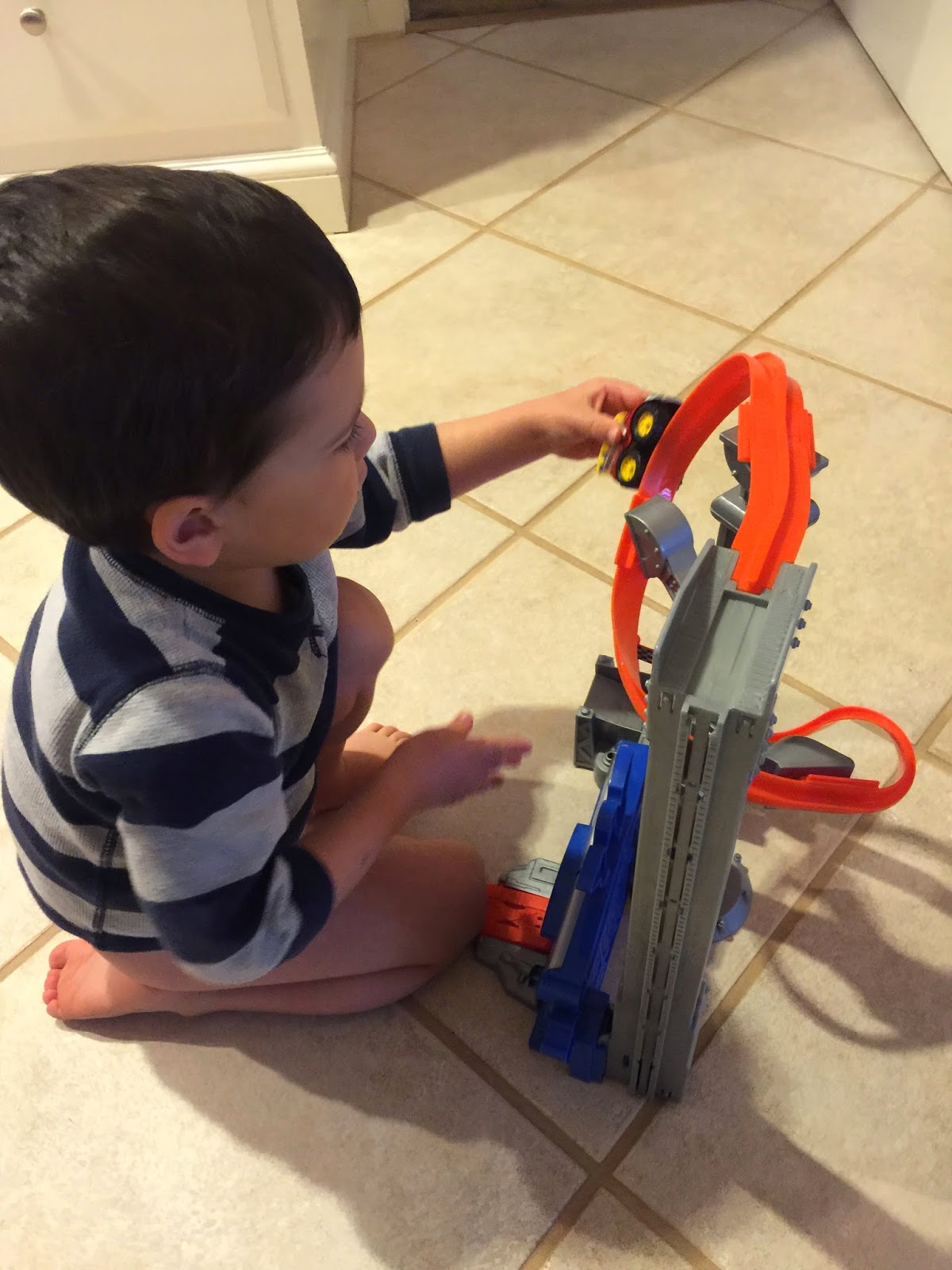 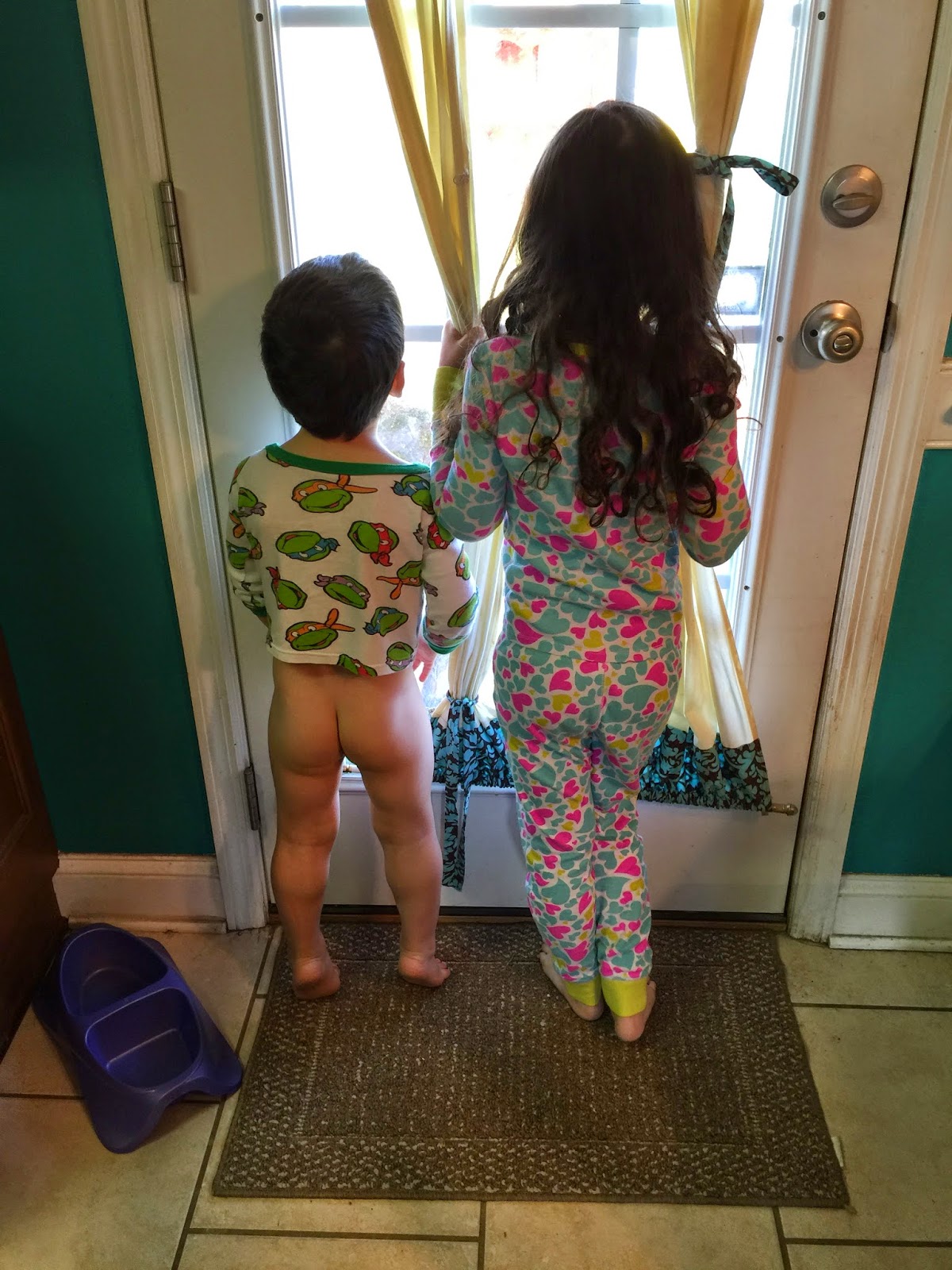 At the end of March (approximately 5 weeks after starting), I would say that we're sitting at about 70%-80% potty trained.  Not great, but not terrible.  It's one of those things that you simply can not force your kids to do.  We only have two options: go back to diapers full time or keep plugging along like we are.  So we choose to keep plugging along!  We know that Cooper just works at his own pace (and he always has!), and at least he's moving in the right direction.  We definitely still have a lot of naked time around the house, but he is slowly getting used to wearing underwear without peeing in them.  It's a long process, but we'll get there!