If there is one major thing that Matt and I have in common, it is this: we are huge animal people.  We both adore animals and will always be the kind of family that has a pet.  We both grew up with pets, and we want our children to experience the same thing.


When Matt and I started dating, he had a dog named Bono (like the singer from U2.  Some people pronounce it like Sonny Bono from Sonny and Cher.  That's not it.)  We still have him now, but he lives outside (long story). 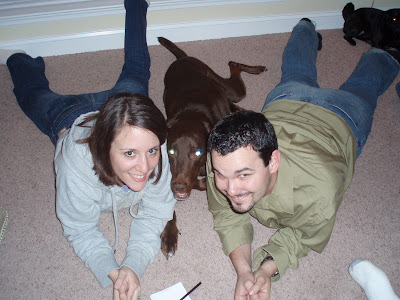 The summer after we got married, baby fever hit me hard.  We had only been married a few months and were WAY too young to have kids, so we got a puppy instead.  Enter Lola. 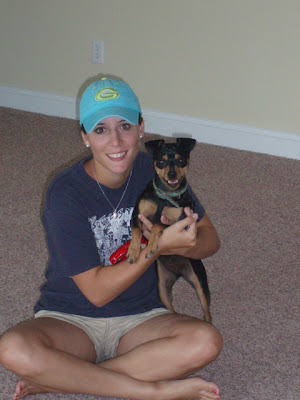 For Lorelai's 3rd birthday, we got her a fish tank for her room.  We took her to PetsMart and let her pick out her own fish.  She got two goldfish (one gold and one black) and named them Marlin and Nemo.

If there's something else that Matt and I have in common, it's that there's one animal that we do not care for: cats.  We just are *not* cat people.  At all.  Forever ago, I took LL over to a friend's house for a play date, and they had a cat (Crissy!).  LL fell in love with this thing and has on and off asked for a cat since then.  We keep just telling her no, and usually she just moves on.

One day, after LL went down for a nap, I was nursing Cooper in the living room.  It was pretty quiet, and I noticed a noise that was NOT typical to our yard/house.  Honestly, it was so small that it sounded like a bird.  But the thing is, we have next to NO trees in our yard, so we don't hear birds a ton.  And this sounded super close.  Then, as I listened to it more, I realized that it sounded like a cat.  After I got Cooper down for his nap, I went out on the porch to see if I could find the sound.  Yep.  I was right.  There was the smallest kitten EVER on our porch.

I tried to take a picture of it to send to Matt, but it ran off the porch.  Since I had both kids inside napping, I did not have time to chase this kitten.  I went back inside, and after about an hour, I heard it again.  This time, I went outside and took it some milk (which Emily told me later is a BAD idea!).  It came up and immediately started drinking.  I kid you not - this was the smallest kitten I have ever seen.  I felt so bad for it!  After Emily told me that milk was bad for it, I took it some water.  It was also acting SO hungry.  Obviously we don't have any cat food, so I took it just a little bit of dog food.  Close enough, right?  It scarfed that junk down.

I tried to call Matt in the middle of all of this, but he was busy at work and couldn't talk.  I knew he was going to be SO MAD at me, but what was I supposed to do?!  I'm a hormonal just-had-a-baby woman and this itty bitty kitten shows up at my house.  My momma-drive is already in high gear right now; there was no way I wasn't gonna help this cat.  I'm always wanting to pick up stray dogs on the side of the road and he NEVER lets me.  I just knew he wasn't going to be happy about this.  But in my defense, this cat came to me.  I did not go looking for it.  Finally Matt was able to call me back and I told him what was going on.  He could hear it meowing in the background and could tell it was small.  He wasn't mad (shocker!  I think he mostly acted that way because he was driving around with a co-worker - haha.) and said he would deal with it when he got home.

My mom was supposed to come over that afternoon to get LL to take her to spend the night.  She called towards the end of LL's nap to tell me that she was close.  I told her about the kitten so that 1- she wouldn't run over it and 2 - she wouldn't be shocked to see it on the porch.  When she got there, she was equally as shocked by how small it was.  When LL got up from her nap, I debated on telling her if the cat was there.  She was in a TERRIBLE mood, so I decided that I would just to cheer her up.  From the get go, I told her that the cat was NOT ours, and she seemed to really get it that it wouldn't be staying.  To say that she was happy to see this kitten is a huge understatement.  When we were out on the porch with it, my mom said, "Uh-oh, a cat showed up!", and I looked at her and said, "Yeah - Uh-oh is right!".  That is when the cat got named Uh-oh.

Matt got home and, again, was crazy shocked at how little the kitten was.  I told him we had been calling it Uh-oh and he laughed.  My mom left with LL, and Matt told her that Mommy and Daddy would talk about the cat and that she could see it the next day.  To save you the long boring details - the cat is now ours.  Uh-oh is officially a Mullican.  Matt took it to the vet the next day to get it checked out because it had a gunky eye and we wanted to make sure it was nothing serious.  We found out a few things from the vet:
1- Uh-oh is a boy.
2- The eye is nothing serious and has already cleared up.
3-He has worms and needs medicine.  Yay.
4- He has ear mites and needs medicine.  Double Yay.
5- He is about 8 weeks old.
6- He only weighs 1.25 lbs!

I really wish I could have been there to see Matt tell them that the cat's name was Uh-oh.  It really is hilarious to say.  I also wish I could have been there when the vet called to tell him that "Uh-oh is ready to be picked up!".  There are a few things we decided about Uh-oh.  He WILL be an outside cat.  We have enough going on without tackling another indoor pet (remember the two dogs, two fish, and two kids?!).  We WILL get Uh-oh fixed.  Even though he's a boy, we don't want to be responsible for a million cats running around.  Uh-oh is free to come and go.  While for LL's sake we hope he doesn't decide to leave, we're also not keeping him here.  We will provide him with food and water, he is free to take it or leave it.  But, obviously, he's taking it. 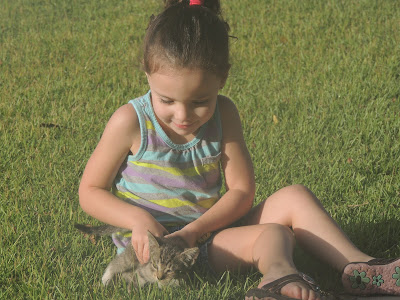 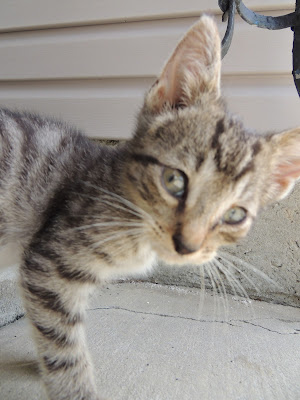 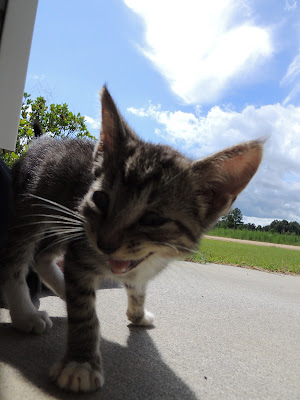 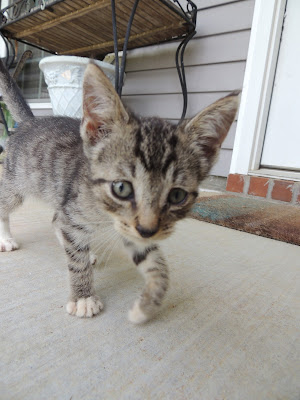 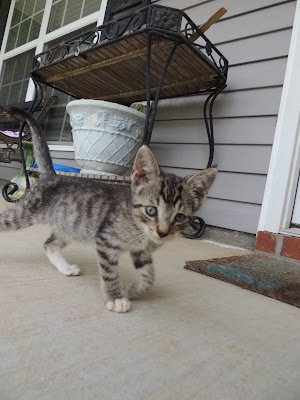 OH that last picture is PRICELESS!!!! I don't think I would have had the heart not to take in "Uh Oh" either. :)

I just had to chime to let you know that we are also crazy people. LOL. We got a cat right before we got married, cause I had cats all my life, and thought that there was no way I could live in a house without one. Ok, that may be a bit dramatic, but you get the point. I loved cats. Recently, I saw a lady on an online yard sale site that I go to, that was giving away a pair of turtles. Yep...turtles. Within 15 min., I called Ike to see what he thought about it, and later that afternoon, I went to pick them up. Sometimes at night, we sit on the couch and stare at them (They are in a 55 gallon tank in our living room), and wonder what the heck we were thinking, but the kids LOVE them! They talk to them, and watch them swim around and sun on their basking rock. So, take heart, you and Matt aren't the only crazy parents out there. Plus, you have to admit....Uh Oh is super cute!

LL looks SO happy! We are crazy pet people too. We got two kittens the month before we found out I was pregnant with Amelia. After Hazel died we got Charlie, my moms cat that LOVES Amelia. Now we have a fish tank with fish... and Amelia wants a dog.

Adorable pictures of LL with Uh-Oh.