My friend, Emily, has recently become a consultant for Stella and Dot.  If you're like me, you probably have no idea what that was before now.  I didn't until she said something to me about it!  Anyway, it's a company that sells some pretty stinkin' awesome jewelry.  And it works kind of the same way that Mary Kay, Thirty-One, and The Pampered Chef work.  You "buy in" and then host parties.  The person hosting the party gets free stuff for hosting, and so does the person who is a part of the company.  This is just like those other things, except that the jewelry is way cuter!

Emily is just launching her career in the jewelry biz and is hosting a CONTEST over on her blog!  She's showcasing her mega-awesome jewelry and is also giving away THE CUTEST owl necklace.  I think that she's doing this at an awesome time because Christmas is right around the corner, and Stella and Dot has some really affordable pieces.  Here's a link to her blog: http://emilyandzachparker.blogspot.com/ , a link to her Stella and Dot page: http://www.stelladot.com/emilyparker ,  and a link to her Facebook Page about it: http://www.facebook.com/pages/Stella-Dot-Emily-Parker-Independent-Stylist/102984829764547?v=wall
Posted by Robyn at 7:22 PM 1 comment:

Dear Lorelai,
Beautiful girl, you are 19 months old!  When I think about the fact that this holiday season is going to FLY BY and then, before I know it, we'll be at your birthday, it blows my mind!  You are growing entirely to fast and I can't seem to keep up!  You are a wonderful little girl.  You light up my entire world and you make EVERYONE smile!  Perfectly good strangers will stop to tell you how beautiful you are and to talk to you.

I always knew that I would think that my children were smart, but you really blow me out of the water.  You are waaaay beyond smart!  You are talking up a storm!  (You get it honest from your mommy)  You say a ton of two word sentences and are starting to say a couple of three word sentences.  Some of my favorite things that you say are: buddy Lola, my Sunny, love you, kiss kiss, and eat food.  In addition to saying tons of stuff that we can understand, you also talk alot of baby talk that I have no idea about!  I love it, though, because you say it so believeably.

In addition to talking up a storm, you are walking and RUNNING up a storm!  You are NEVER still and by the end of the day, everyone who has spent time with you is exhausted!  I think that that is so great, though, and I love that you love to run and play.  I'm glad that you're not content to just sit and be lazy.  You definitely have an oppinion about what it is that you want to do!

You are an extremely funny girl.  You laugh and try to make others around you laugh as well.  That is such a great quality to me!  You've been back at Grammy and Pop's house full time since I've been back and school and you're learning so much!  Grammy and Pop are teaching you your letters and you come home with tons of "school work" in your backpack every day.

You still love Lola (and Sunny!) beyond words!  When you say "buddy Lola", it is describing exactly how you feel about her!  She loves you, too, and I love to see the two of you playing together!

You have 12 teeth now!  You have your 8 front ones, and your 4 molars.  I have no idea when you'll get your canines, but I'm enjoying a happy non-teething little girl for right now!  You go to bed between 7:00 and 7:30 and wake up between 6:15 and 6:30 every morning.  You're drinking about 24 - 30 oz of milk a day.  You still wear a size 4 diaper and a size 5 shoe.  You really need some fall/winter shoes, but I'm waiting until it really starts cooling down to buy some so that I can see if you'll be in a 5 or a 6!  All of your 18 month clothes are fitting great, but I have all of your winter stuff in 24 or 2T because you are so TALL!!  18 month pants would be way too short for you buy the time spring gets here!

You have been showing quite the little temper lately, but we're taking it one day and one tantrum at a time.  Even during a tantrum, you are a VERY good listner and I can usually re-direct your behavior just by talking to you.  I LOVE that!

You're really starting to enjoy children your age now!   You ask for Ben and Kye alllll the time and you'll actually play with them if they're around.    It is so cute!  You also ask to watch videos of your online friend Kenzie ("Kenny"), and that's super cute, too.

You're very into giving kisses and hugs right now and it is my FAVORITE!!!

All of your night time sleep issues have finally gone away and our great sleeper is back!  We put you down awake, and we usually never hear another peep from you until the morning!  I don't know what happened there for about a month, but I sure am glad that it's gone!

I just love you more and more each day, precious girl! I want you to always know that God made you perfectly and that your Daddy and I prayed for you for a long time before you were even born. We love you more than anything! 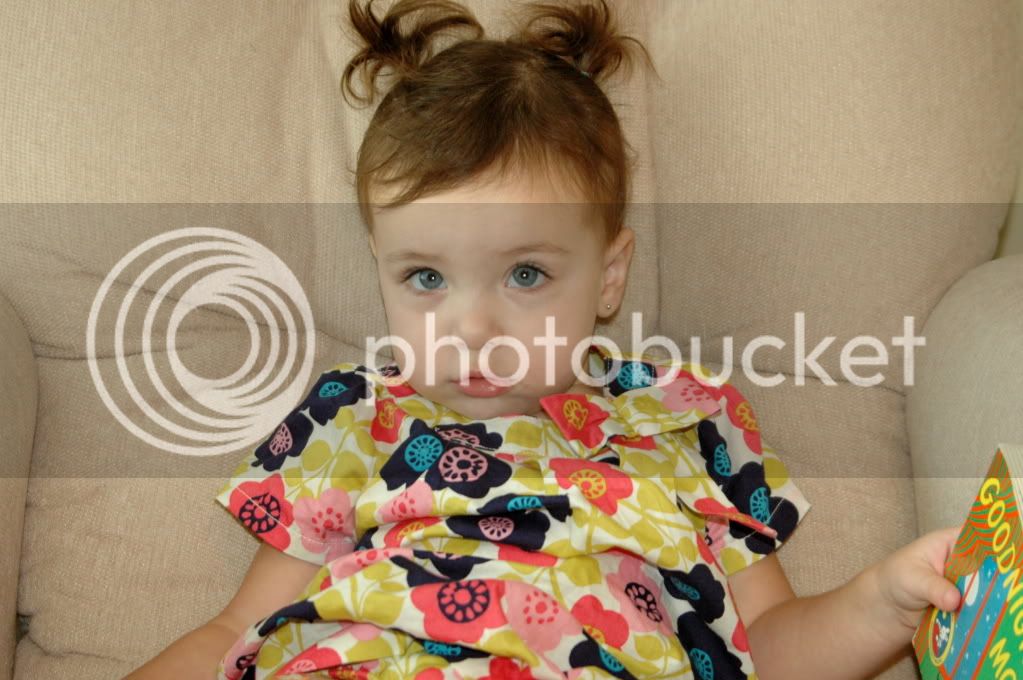 Even though I've only been back at school for 3 weeks, I was totally looking forward to Labor Day because it meant a long weekend for me.  Who doesn't love not having to go to work on a Monday??  It started out with not having much planned, but it turned into a pretty awesome weekend.

Saturday morning we drove to Lakeland with Grammy, Gentry, and Gray to go to the Flatlander's Fall Frolic.  If only it had felt like fall!  It's kind of like the Honey Bee, but all of the vendors are in a field versus being down the main street of the town.


At the Fall Frolic, LL got to ride a horse for the first time!  At first, she was terrified, but once he started moving, she LOVED it! 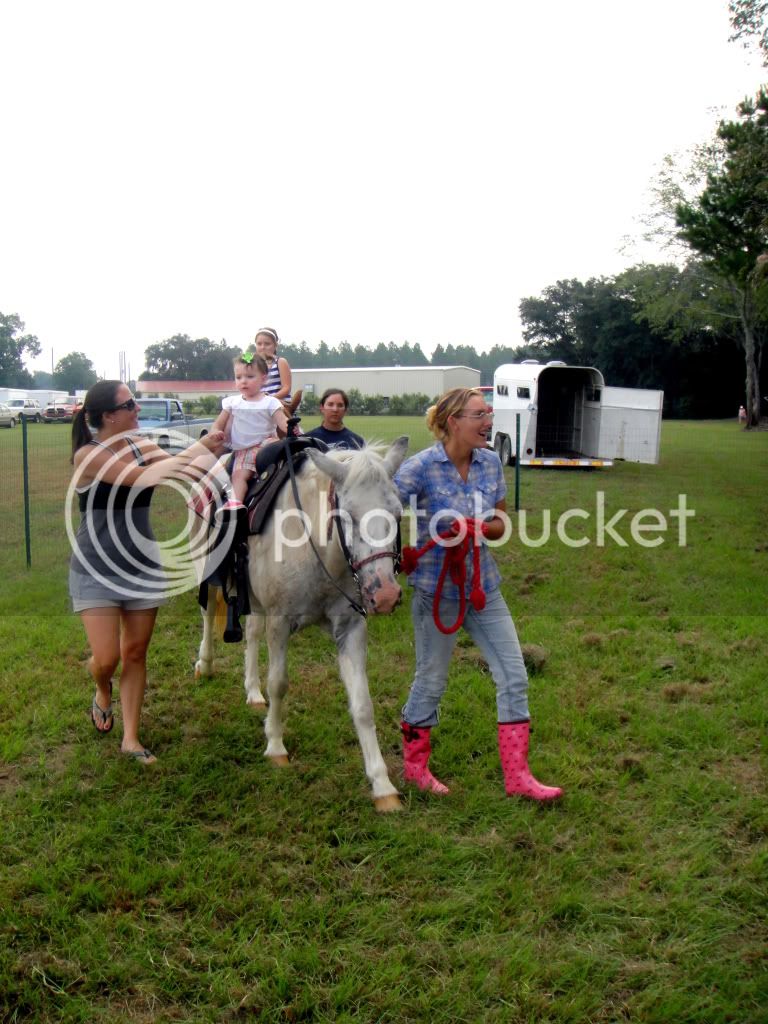 Dancing to the music at lunch.

After the Fall Frolic, we came home for nap time and for the first FSU game of the season.  Matt (and his dad) is a hardcore FSU fan, so he's been counting down the days to this game.  I watched a little of the game, but then decided that a nap was more up my alley.  :)

After the game we headed over to Grammy and Pop's to eat our (early) Labor Day dinner with everyone.  Matt grilled some ribs and they were awesome.

Loving some ice cream, or "cream!!!!" as she kept calling it.

Sunday was just a normal Sunday for us, except that Matt didn't have evening church!  It was cancelled because of the holiday and I so enjoy spending time with him on Sunday evenings since it doesn't happen that often!  We did go to Smokin' Pig after lunch, but it wasn't the best experience because LL was BEYOND tired.  I mean, we didn't even get there until 12:30 which is (mildly) past her nap time.  Not cool.

Monday morning was a girls' morning out so that Daddy could get some yard work done.  I picked up my mom (Gigi) and the three of us headed out to Target, Pet's Mart, the mall, and Chick-Fil-A.  It was such a fun morning!


Breakfast of champions: cheese toast, prunes, and a vitamin.

Playing at the indoor playground at the mall.

I know this one is blurry, but I really love her face! 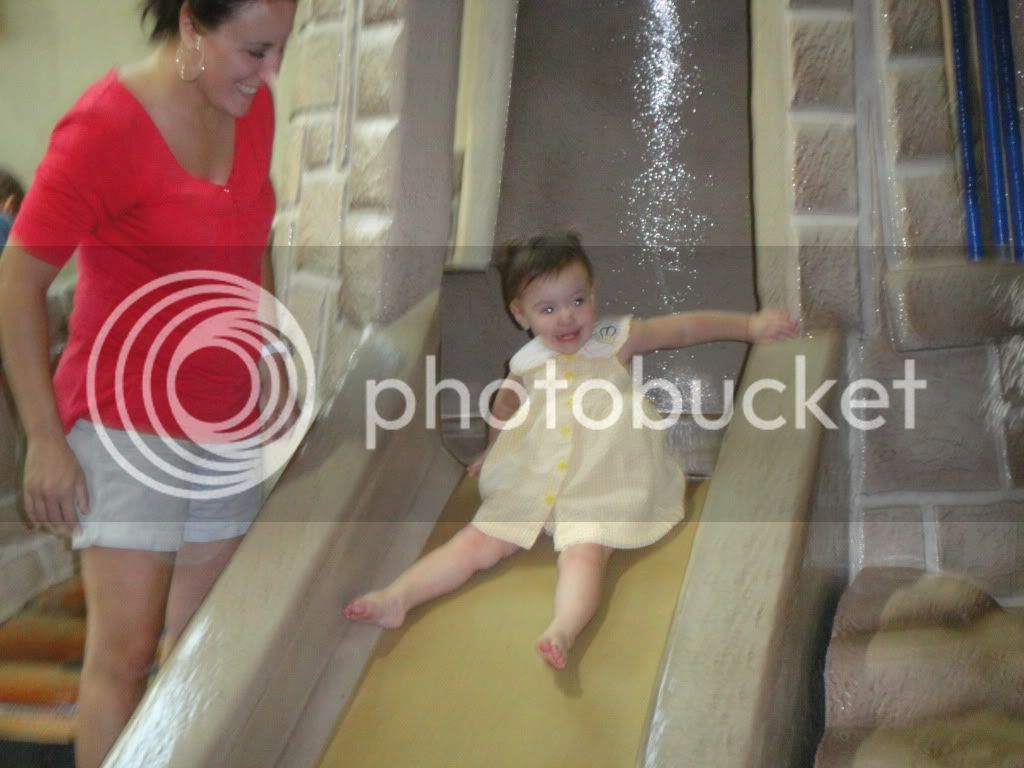 After lunch I headed home so that LL could nap and then I headed BACK to town to do my grocery shopping.  If you've ever grocery shopped with an 18 month old, you'll understand why I didn't take her with me.  :)  I haven't done bigger than just a quick grocery run in a couple of weeks, so this trip ended up being pretty big.

Once I made it back and LL woke up, we headed over to Grammy and Pop's house to check out their new vehicle and eat dinner with them.

Being a good mommy to her baby! 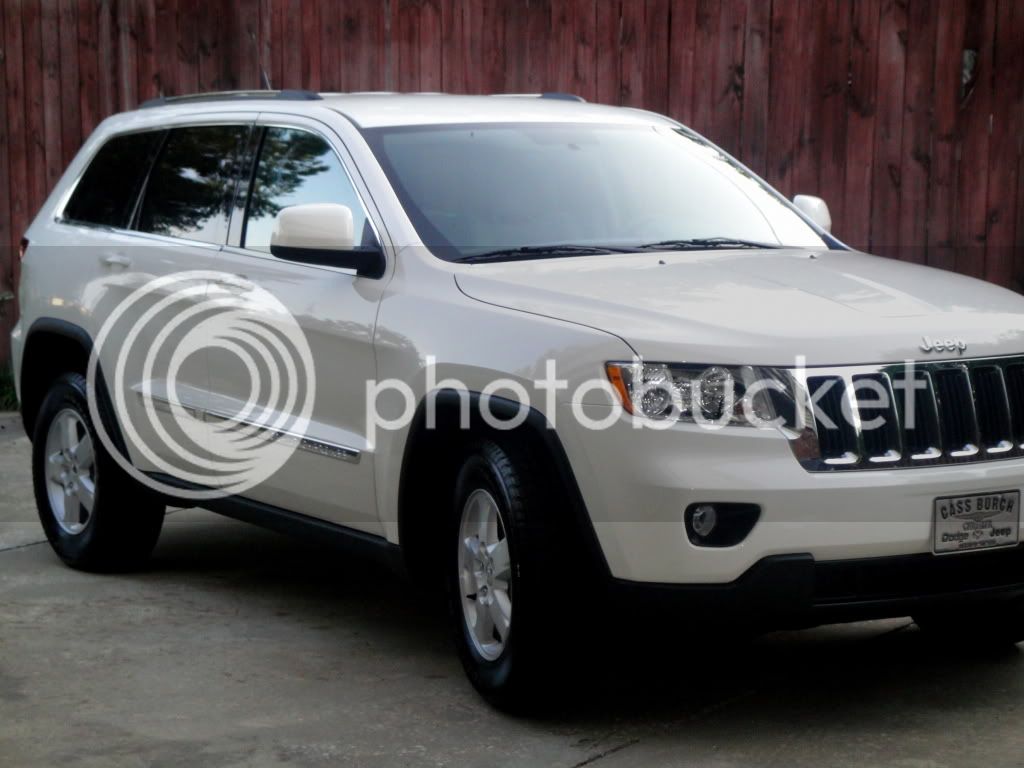 Here's a really cute video we took of LL on Monday when she was acting out something for us.  It was like we were watching her act out a scene from a play.  So funny!
It was kind of a crazy weekend, but it was a really good one!
Posted by Robyn at 8:45 PM No comments:

***I started this post right after our anniversary (In May!  Oops!) and I really don't think I'll have time to finish it any time soon.  I was sooooo close to being done, so I think I'll just post what I did.  Better than nothing, right?

Original Post:
Matt and I had our 6th Anniversary on May 22. Wow! Time has really gone by quickly! I know I'm a little late in posting this, but I thought I would put some of my favorite pictures of us throughout the years on here. I have an amazing husband and I can't wait to spend another 6 years as his wife!
2004 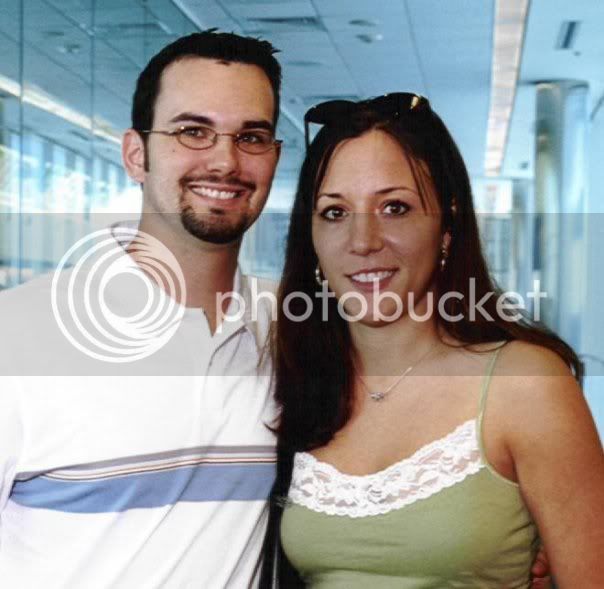 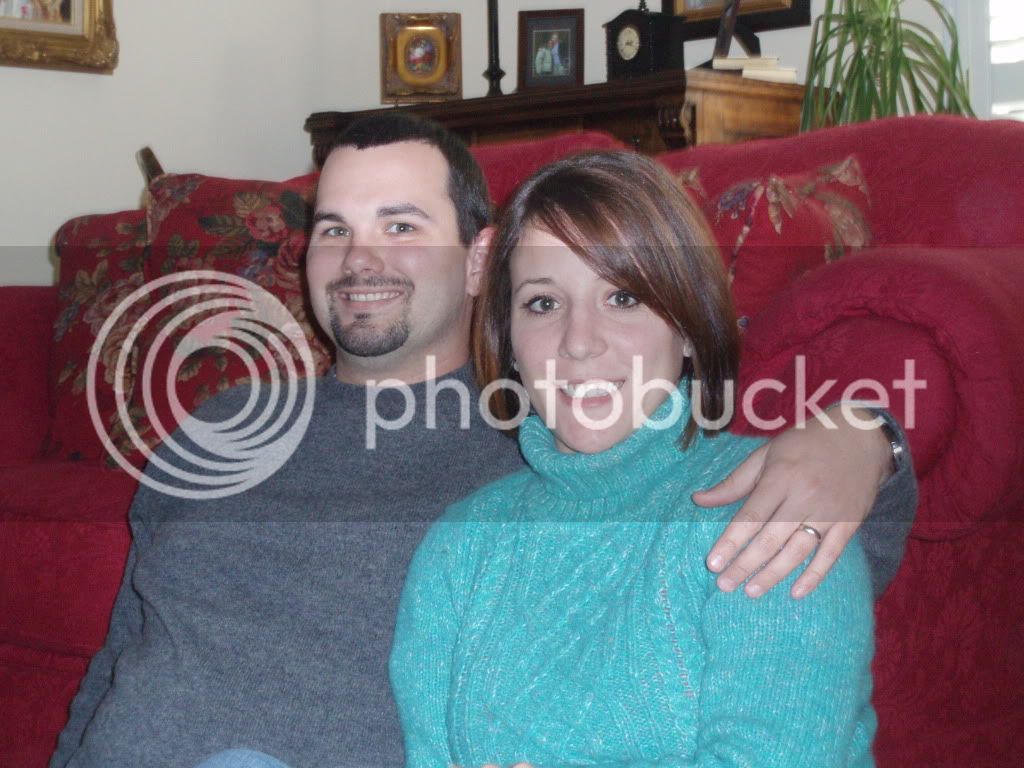 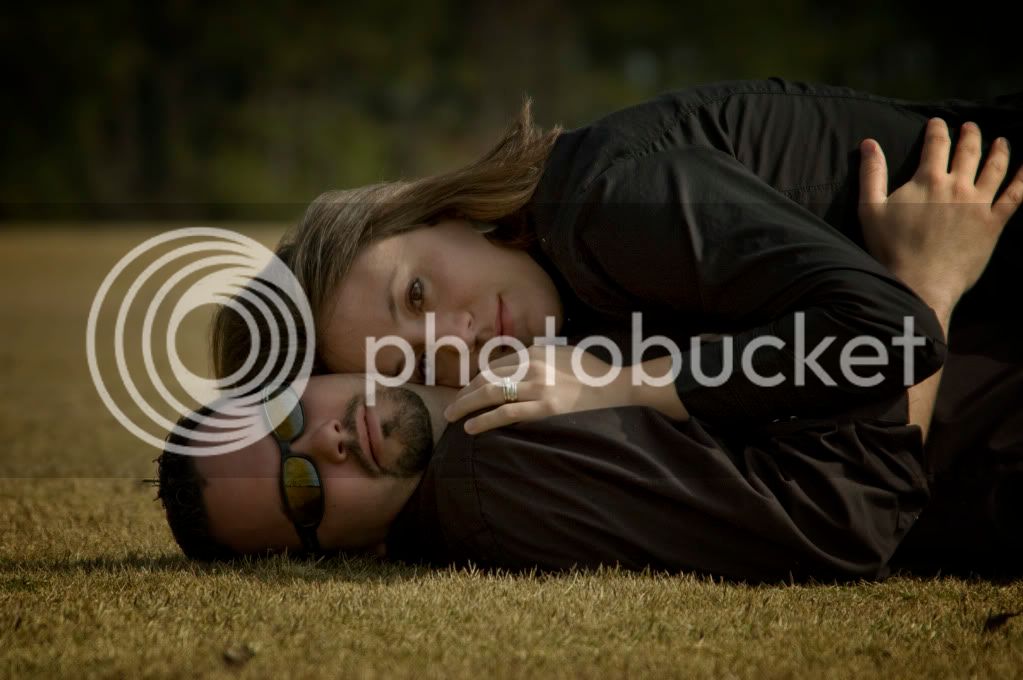 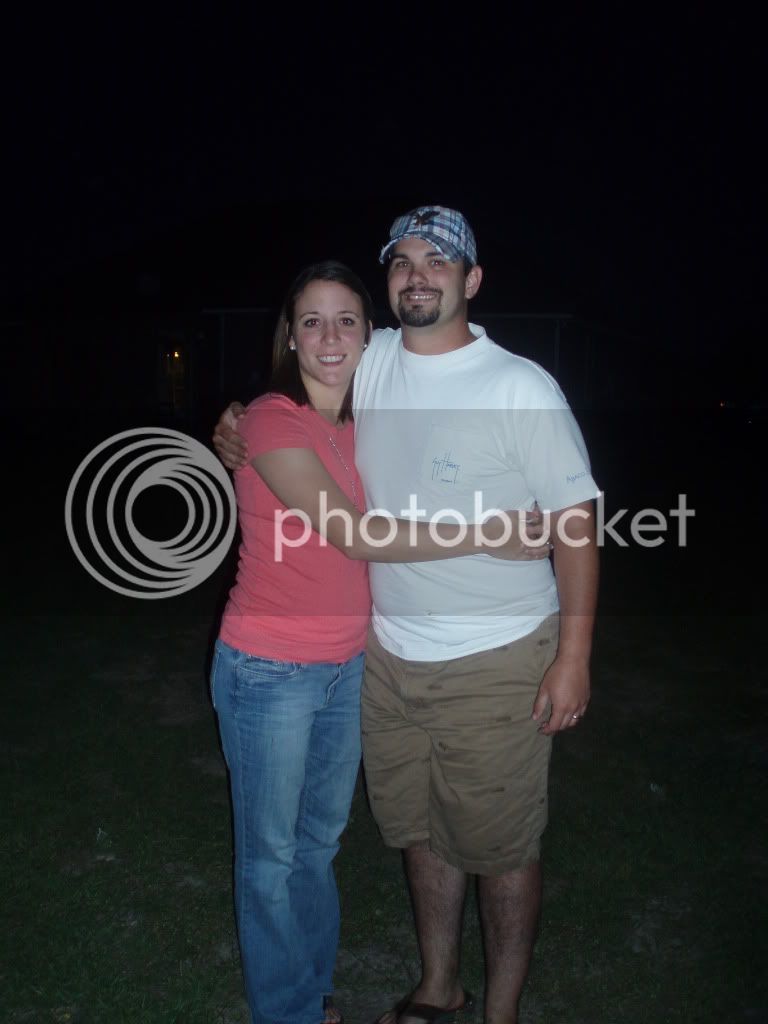