This weekend was our official kick-off to summer!! LL had her last day of school on Thursday (I still have to go all week this week, and Cooper has his last day on Monday), but we still counted it as officially summer!

Friday was just a 1/2 day for me (and technically for LL, too, but we didn't send her).  Cooper was supposed to have school, but both of his teachers were going to be out (and he was going to have two subs), so we just decided to keep him out, too.  I got to leave for work a little later since I didn't have LL with me (which is a relative term.  I still had to leave by 6:45), but I got this picture from Matt a little while later. 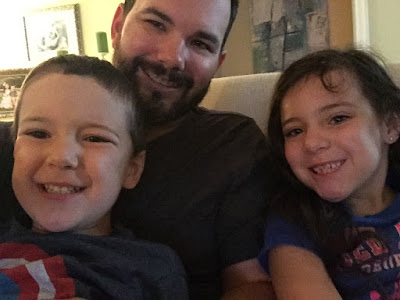 Grammy and Pop had fun plans for the kids since they were both out of school - a trip to Wild Adventures! 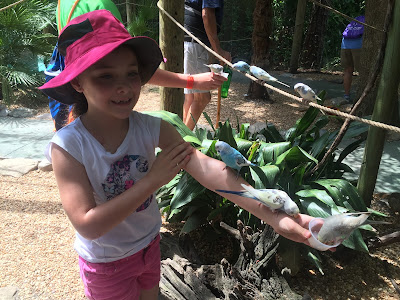 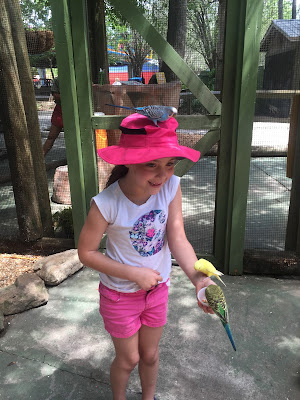 Grammy said Cooper was not so sure about it. 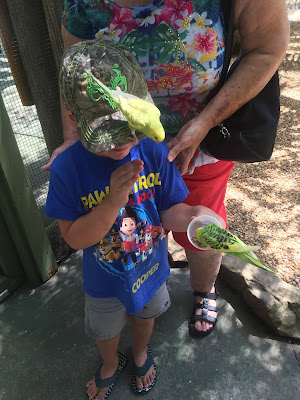 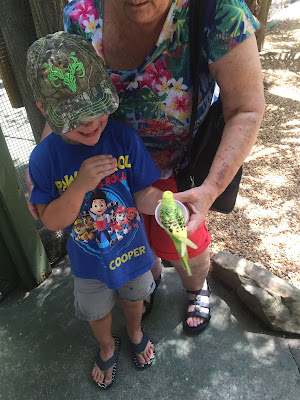 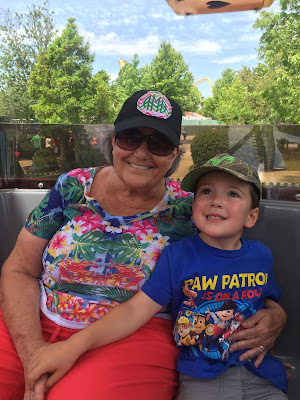 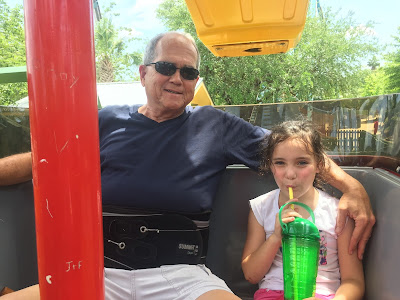 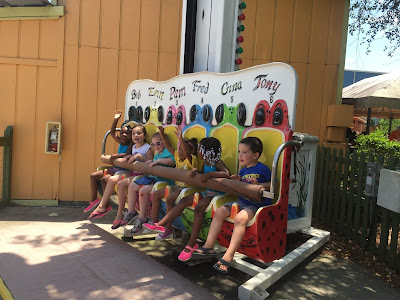 After school got out for me, I went home to an empty house for a few hours (since the kids were still at Wild Adventures).  I may or may not have spent zero time cleaning and taken a nap instead.  LL had plans to spend the night with Grammy and Pop, so I went to get Cooper and go pick up some dinner.  On the way home, this is what happened.  They wore a boy out!  It was only about 6:15, but he was out.  When I got home, he slept through me carrying him inside, changing him, and putting him in bed.  He slept until 6:30 the next morning! We spent a lazy morning at home.  LL and Grammy went swimming, went to lunch, and got pedicures.  We stayed home with Cooper and spent the whole morning outside.  It was so nice to be in the sunshine and to leave all phones and technology inside!  We cleaned up the backyard, cleaned out the chicken coop, played, and set up some new outdoor furniture.  We all had a blast!  After nap, Kayla came over, and we went to pick up LL and head to The Mix for a welcome-to-summer treat!

Cooper didn't go with us, but Batman did! 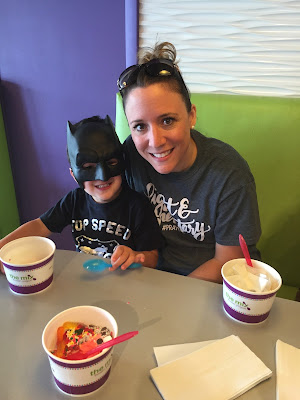 We all survived the school year! 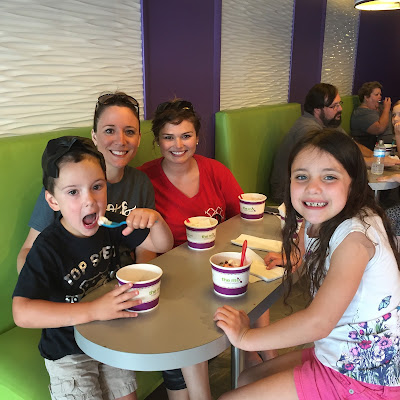 Cooper refused to get in on the family picture, so we just got one with our best girl instead! 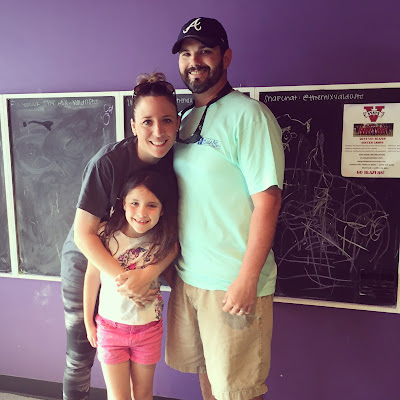 After The Mix, Matt dropped me and Kayla off at my dad's to pick up my sister's car.  Long story short, but she is moving and took my dad's truck to Atlanta with her (to help with the moving process) and left her convertible Mercedes down here.  I have to take The Beast to the shop this week to get fixed from my wreck (you can read about it here), so I figured since I would be in a rental car this week, and I won't have any kids to haul around Wednesday - Friday, I would just get her car!  We had a blast with the top down and the music loud! 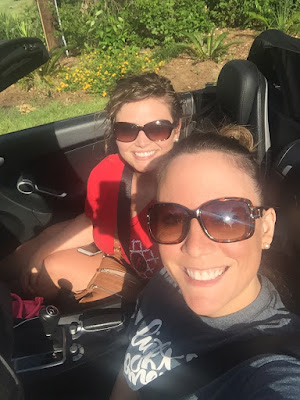 From Batman to Ironman - this kid had quite a day! 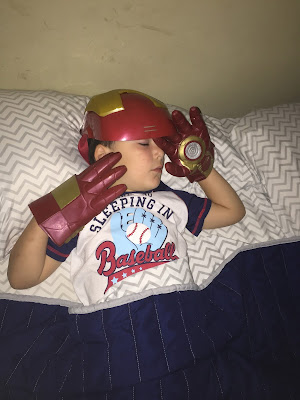 We had another pretty relaxed day, which is soooo nice after a few weeks of being super busy.  We had some grumpy moods Sunday morning, but we still managed to get in a picture before church.  Thankfully, after church was over, we all had much better moods.  It's amazing how Jesus can just make you happy! 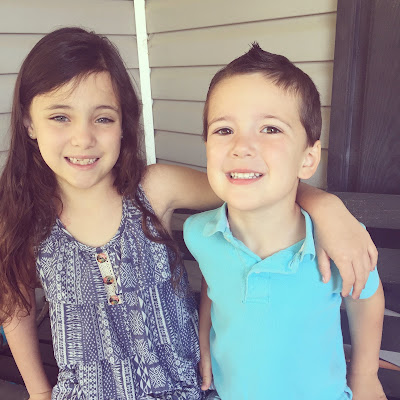 Our typical Sunday ritual is to go by Publix on the way home from church to stock up on what we need for the week.  Simple things like seeing my whole family hold hands while we run errands just makes my heart happy. 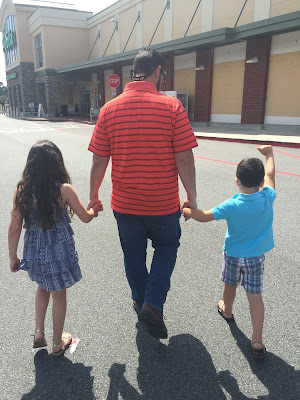 We saw geese as we were leaving Publix, so we had to roll down the windows and honk! 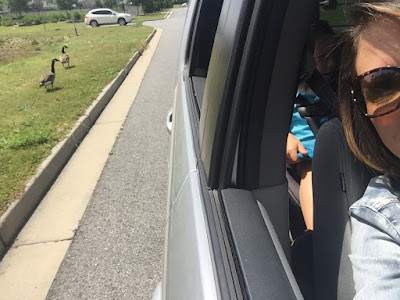 During Cooper's nap time, LL spent a lot of time drawing a "treasure map" for her and Cooper to use when he woke up.  It was so sweet!  He was totally on board, and immediately got dressed for the adventure!  Argh! My two pirates!  Here's a video of Cooper talking like a pirate, and LL explaining her map.  His pirate talk gets me every time - it's so hilarious and I could listen to it all day! 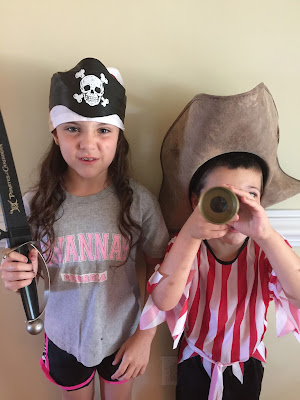 LL's map!  Here's a video Matt took of the kids on their hunt. 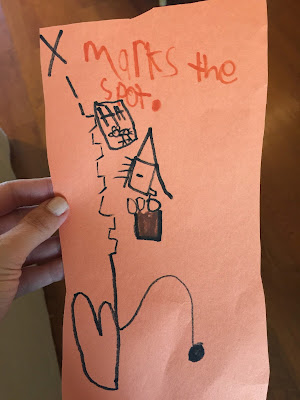 I stayed inside to get some chores done while the kids played outside with Matt.  I tried a new recipe for dinner, and it was amazing.  Matt and I both fell in love.  The recipe is here, but it's basically grilled naan bread with bbq chicken, fresh mozzarella, and avocado.  I promise it's worth trying! 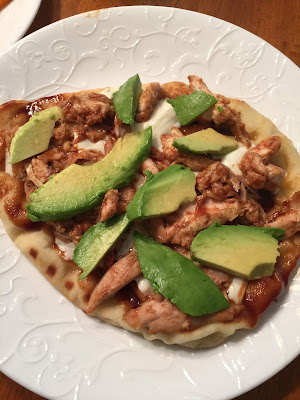 After dinner we had some movie time and did some more chores.  One thing I accomplished?  Hanging all of Cooper's super hero stuff!!  It has all been sitting on one of his shelves, but I like this much better!  And, yes, I know Batman is not a Marvel superhero.  But Cooper doesn't care.  ;) 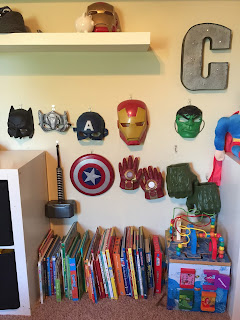 That's a wrap on our weekend!!  After this next week, we will ALL officially be on SUMMER!

"To introduce the floral trend and tie a scheme together, select one or two key shades from a flower print. For instance, if you have a floral rug, pick out a couple of complementing hues from it and echo them in cushions, lamps and vases. This sofas jardin will unify the room and prevent the look becoming too kitsch."Alternatively, a beautiful, big bouquet of flowers, taking pride of place on a dining or coffee table, is a simple and affordable way to make a statement in any room."PICK OF THE BUNCH: Just as uniform, orderly flower beds can look unimaginative, so too can regimented floral schemes.Be inspired by the Christian Lacroix Maison fabric collection for Designers Guild, mesas y sillas de terraza which features stunning prints that can stand alone or work together in a profusion of pattern. Parvenue, in Rosee, £75 a metre, features bold blooms on a white background, while Frivolites, in Nacre, £110 a metre, incorporates candy-stripes with vivid blooms.Pretty wild flowers in a meadow is pictured on the Betsy fabric, which Marks Spencer has sofas de jardin used to great effect on a Grove Chair, from £699, and a Bedding Set, from &poud;59 for a double, available in stores.