Cooper was 14 months old (in his 15th month) from August 25 - September 24.  This was a really exciting month with our sweet boy - he has done so much growing and developing!  I am really loving this age with Cooper! 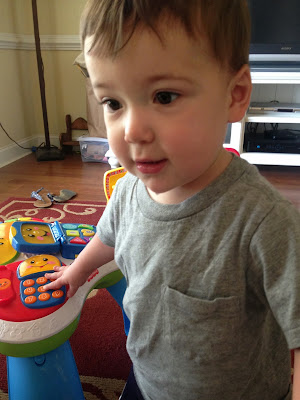 Schedule:
His schedule has changed a little this month because we've started the process of dropping his morning nap:

Favorite Foods: Our Cooper man is still a FANTASTIC eater.  Here are some of his favorite foods this month: yogurt, peanut butter and jelly sandwiches, egg sandwich, black eyed peas, waffles/toast, and frozen grapes.  He eats so much of EVERYTHING, but these are just a few of his favorites. 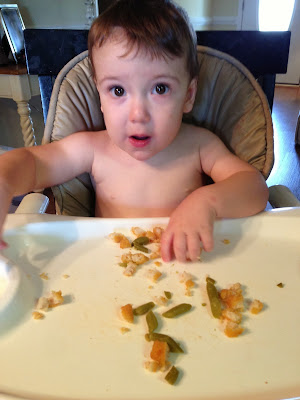 Teeth:  Cooper didn't get any new teeth from last month, but he sure did work hard at getting those molars all the way out.  They're still not 100% out, but thankfully all of the sharp points on them have broken through (which seems to be the most painful part).  I expect to see either more molars on the bottom any day now.

Walking:  I was right last month - we now have a walker!!  LL and I took a trip to Disney this month (posts to come!) and he decided to walk for all of us the day that we got back in town.  It was only a few steps at first, but over the last two weeks, this little boy has taken off!!  He's still a tad unsteady, but he is really getting better and better every single day.  He is also finally starting to realize that walking is easier than crawling (even though he isn't as fast at it) and he's starting to prefer to talk places over crawling.  I love seeing him go!  We had to take an entire morning to go around town and find him shoes to fit his little chunky feet, but we found some!  He's got 5 pairs to last him through the winter, so hopefully his feet don't grow too much.

Talking: In addition to all of Cooper's words from last month, he has added a new word this month: hat.  This brings his total to 9.  Some words that we've really been trying to work on for him (that he hasn't said yet) are ball, car, truck, and eat.  While he only added one new word this month, he has reallllly started talking in gibberish a ton more.  It seems like he is "talking" almost all of the time now and it's so cute.  I know that even though they're not real words yet, to him they are.  He probably knows exactly what he's saying, we just haven't figured it out yet.  :)  I think it's so interesting that his physical development was through the roof this month, but his language wasn't.  It shows what he was putting all of his energy into!

Vehicles:  We have one more typical "boy" thing that has started to emerge this month: Cooper's love for vehicles.  He has really started to love playing with trucks/cars/tractors this month.  He has finally figured out what you're supposed to do with them and has started pushing them all over.

Dancing:  His love for dancing has come back this month, and he has started busting a move all the time again.  I love to see him so happy and care free when he (and LL) dance.  It's such a great Mommy moment!

Hats:  This month we really worked on getting Cooper to wear hats.  We didn't do a good job of that this summer, and that meant that he would take them off as soon as we put them on.  I LOVE it when little boys wear hats and winter is coming, so we really worked on this.  It paid off and he now loves to wear hats.  He'll even take Daddy's hat off (if he's wearing one) and try and put it on his own head.  This is also where this month's new word came from.  :) 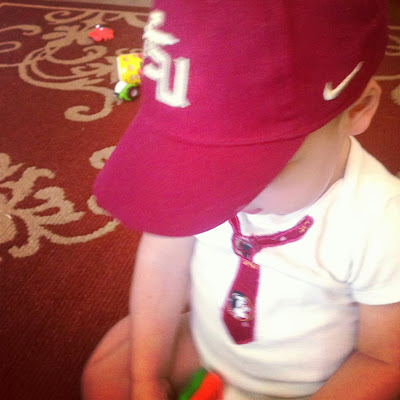 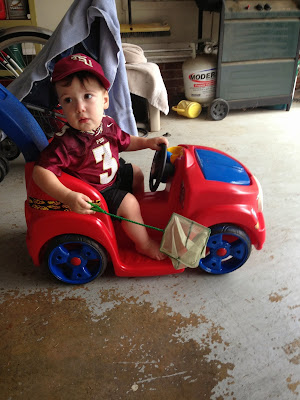 Big Helper: Cooper is starting to get old enough to "help" us with things.  The day after we got back from Disney world, Daddy and LL were washing the car to get all of the love bugs off, and Cooper was able to help them a little bit! 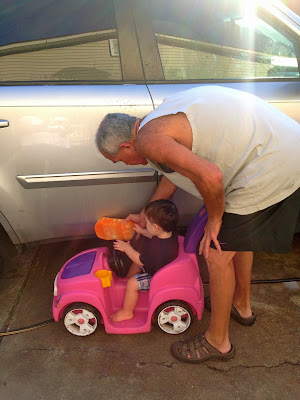 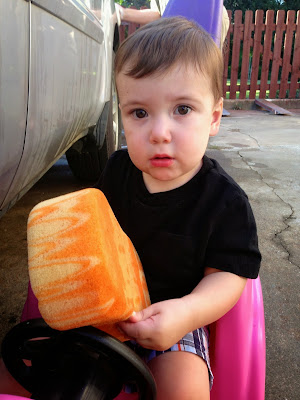 Me/Praise the Lord:  Two of the CUTEST things that Cooper has learned to do this month have come from LL.  She taught him both of these things, so I have to giver her full credit.  The first thing she taught him to do is praise the Lord.  If you say, "Cooper, praise the Lord!", he'll raise both hands above his head.  The second thing she taught him to do is to respond with "me!".  If you ask him a question (ie: Who is a sweet boy?), he'll raise one hand above his head and wait for you to say "me!" for him.  I'm hoping that he'll say "me" on his own here soon.  This is super cute because you can pretty much ask him anything and he'll raise his hand to volunteer for it.  :) 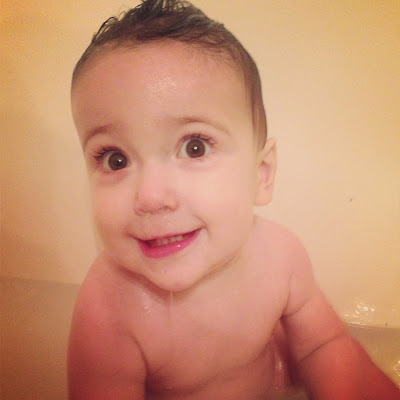 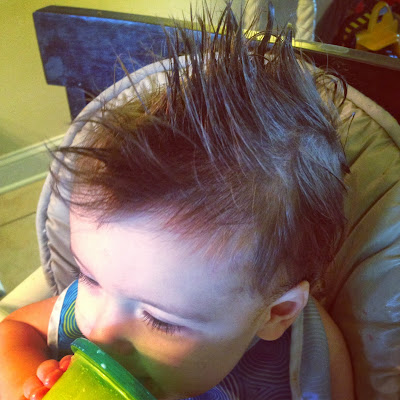 Skipping a nap for church on Sundays is rough! 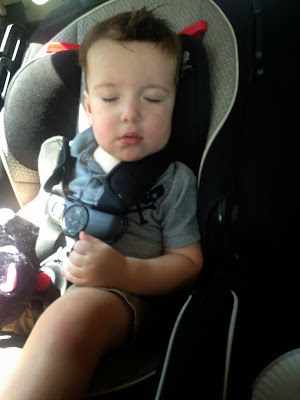 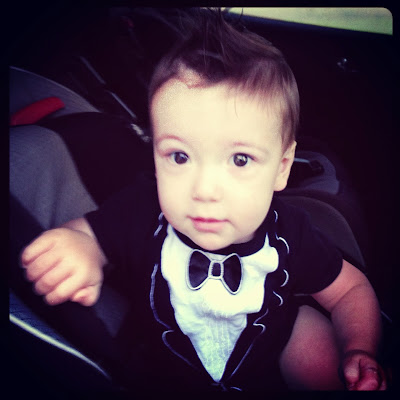 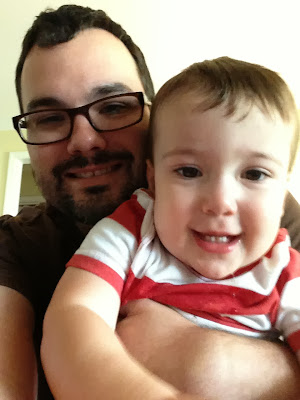 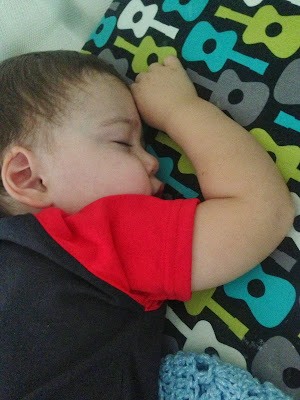 Is it just me, or does he look so LONG in this picture?? 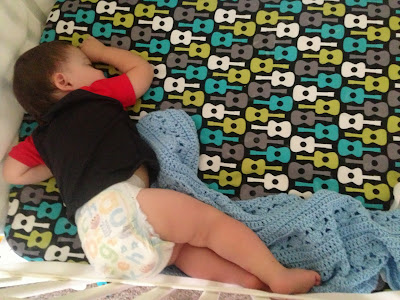 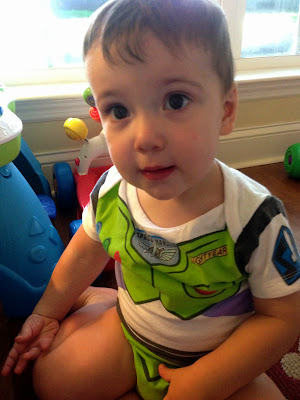 This makes me laugh SO much!  My mom took this right after he poked himself in the face with some pinestraw. 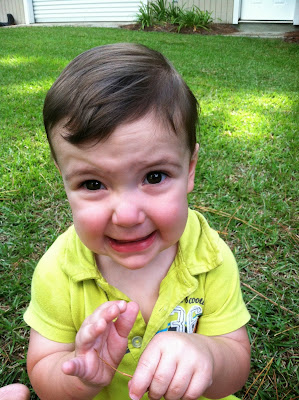 Snack time with his buddy Pace at church!  LL and Pace's sister, Coley, are BFF's, so these boys will be together a lot in the future I'm sure! 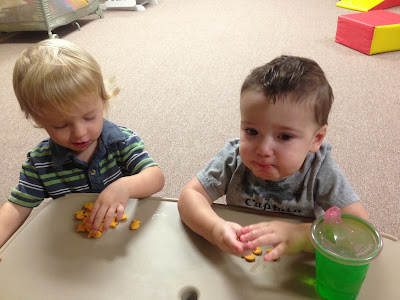 He looks like such a big boy sitting at this table! 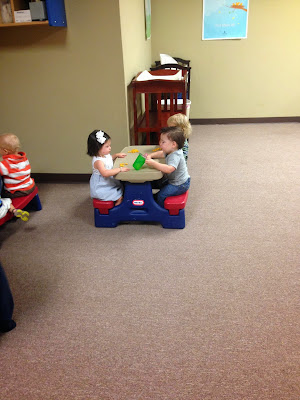 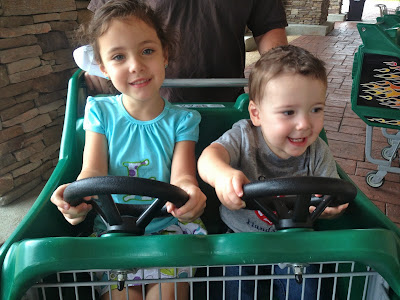 Gigi bought a bean bag chair and the kids LOVE it! 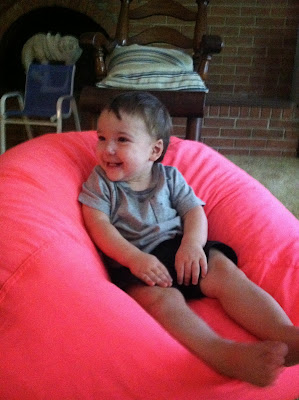 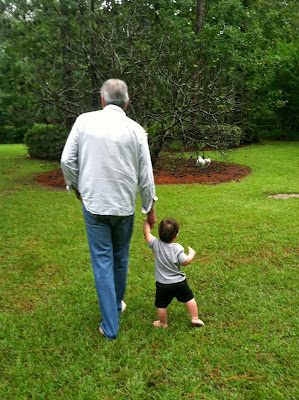 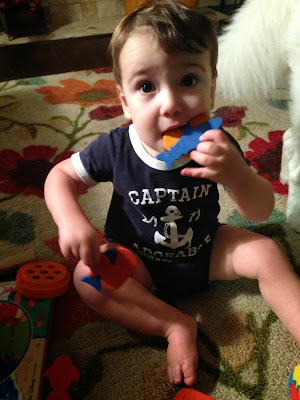 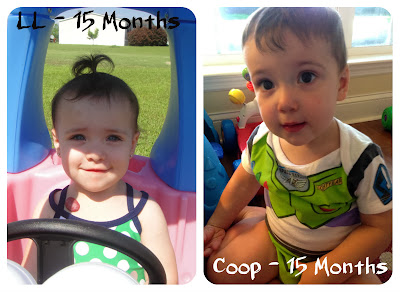