Baby Growth: This week, Baby C is measuring in at about 12 inches and weighs just a little over a pound (but probably more since he weighed a little over a pound 3 weeks ago). His brain is also starting to develop a little more this week. The area that controls emotions (the cerebrum) is now rapidly forming. This means that our little guy is learning to feel things like hunger, thirst, sadness, fear, and even happiness. His hair, skin, and eyes will all start to get their pigment this week. Also big news – his body is now in proportion. No more huge alien head! Baby C can also hear lots going on in there – he can hear my voice, the voices of those around me, my heart beat, and my tummy! 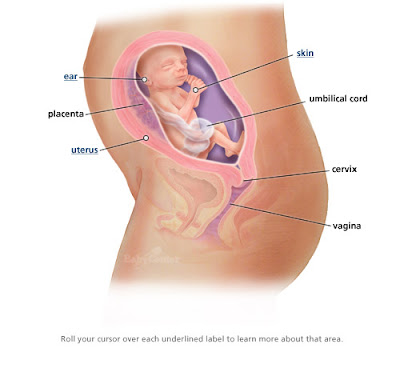 My Symptoms: Obviously, my back still hurts. That’s not going to go away. Matt and I have been doing the stretches that the lady told me about at my massage a few weeks ago, and those have REALLY been helping! My cold is officially all gone, and I am glad to be done with that junk! That was miserable!


I have found this week that it is MUCH harder for me to get comfortable now. No matter if I’m standing, sitting, or lying down – it just seems to be a ton more difficult to find a position that is comfortable. I’ve started putting a pillow behind me in my chair at work and that’s been helping a good bit.


Last Friday I took some Milk of Magnesia that Marie recommended for constipation and it has helped a LOT. I’m still not normal by any means, but I’m not as backed up as I was before. Maybe it was just the little jump start that my body needed – haha.


I’ve also found that it is a lot more uncomfortable to cross my legs now. I can, but it just contributes to a lot of my uncomfortableness when I’m sitting. I’ve started crossing my legs at my ankles (so old lady), but it seems to be helping.


I also think that I’ve started having Braxton Hicks this week. I don’t think I ever really had them with LL, so I don’t feel like I’ve got much to compare it to. But every once in a while, my whole belly will get pretty tight (not rock hard like I’ve read). It doesn’t hurt, and I usually always think that it’s just him moving funny. But then I feel my belly and it’s pretty tight. So I’m assuming that this is what that is??


Weight: After my freak out last week, I was MEGA worried about getting on the scale and seeing another 4 lbs! Well, I have much better news this week. I’ve gained 1 lb. While I still think this is a lot for just one week, I’ll definitely take it over 4 lbs. This brings me to a total of 7 lbs at 23 weeks. I don’t think that’s too shabby. I didn’t blog when I was pregnant with LL, so I don’t have really great records from then. However, I do know from my facebook album from back then that I had gained 13 lbs at 26 weeks with LL. That made me feel great to know that I’m pretty much on the same track that I was then. If I gain between 1.5 – 2 lbs a week in the next 3 weeks, I’ll be in the same boat I was then. I don’t WANT to gain that much every week, but at least I know that if I do, I’m still where I was last time. I did great with my weight gain with her (25 lbs total), so I don’t mind being in that same boat again.


Belly Pictures: I hate how I always look so sleepy in these!  I guess that's what happens when you take them at 6 am!

It's funny that I wore white for this pic and in my pic with LL - totally not planned!  I have no idea if this is terrible to say or not - but even though my belly is WAY bigger with Baby C than it was with LL (at this point, anyway), I really am happy with my overall appearance now.  Like, when I look at both pictures, I like how I look now better.  Is that a terrible thing to say? 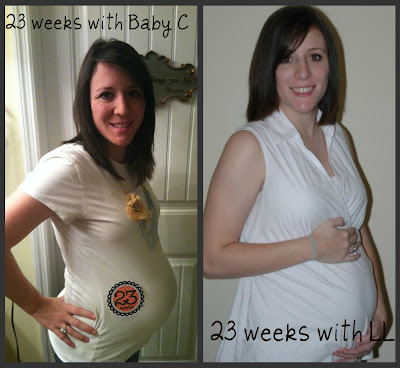 
Maternity Clothes: Same as always. Mostly regular still. Some maternity thrown in. When I do wear maternity, I only wear dresses and shirts. I have yet to put on some maternity pants and I plan to postpone those as long as possible. I’ve found that maternity pants often have HUGE space for your butt. My butt does not gain weight at all until the end of my pregnancy (at least it didn’t with LL), so I don’t need all of that extra room. That means that all of the maternity pants look pretty ridiculous on me and the crotch often hangs WAAAAY too low. Overall, I just try and stay away from them as much as possible. I did buy some yoga pants this weekend, and I think I’ll be getting TONS of use out of those bad boys. I LIVED in yoga pants with LL, and I can totally see myself doing the same this time. I also went to the store intending to buy a bigger bra this past weekend. When I tried the next cup size up, it was still too big that it was gaping at the sides. Umm…no thanks. So I’m still wearing my regular ones. I’d rather have my bra be a tad too small then to be gaping on the sides.


Movement: There is no doubt that this child is a mover and a shaker! His movements are VERY strong, and you can totally see them on the outside. It’s funny that last week I talked about always feeling him in the same spot. He must have wanted to prove me wrong because that has NOT been the case this week. I’ve been feeling movement in such different places, that it even made me think for a while that he had flipped and was now head up. He has been moving ALL OVER the place this week. I’ve also started really being able to feel him when I’m standing up. At first, I only felt him when I was sitting, but he is getting much stronger now. I also still feel like I’m feeling elbows and/or knees. There are some movements that are just way more pointy than others – haha.


Sleep: Back to being pretty horrible again. I think that this is going to be par for the course, also. I’m sleeping bad for one of several reasons: either I’m blazing hot, Matt is snoring and I can’t tune him out, or my nose is so stuffed up that I can’t breathe. No matter which of these it is, it’s mega annoying and I just want to be able to rest!


What I Miss: Just like last week, I’m doing good in this area. I’m enjoying being pregnant, and I’m LOVING all of the movement that I feel. I guess right now I’m not miserable yet, and I’m constantly remembering that this is my last pregnancy and the last time that I will ever feel this. That makes me appreciate it way more.


What I’m Looking Forward To: I have a long weekend this weekend! I have Friday off of school (a furlough day – boo), so I’m excited to have a 3 day weekend! Friday I’m going to Tallahassee with LL and Mrs. Becky for LL’s annual chick pics. (You can see last year and the year before if you don’t remember). Then, Friday night I have a lingere shower to go to. Saturday, the whole fam is going to the Azalea Festival (remember last year?). Then, on Sunday we have church (Matt is leading worship), and I have another wedding shower to go to that afternoon. We’ll be crazy busy, but it’s all super fun stuff!


Cravings: Oh my goodness, let me tell you. I didn’t mention this last week, but last Tuesday I had another kids sale and we went to Steak –n-Sheak afterwards (like always) and it was SO GOOD. I have been thinking about that junk a TON and totally want to go back right now! I also gave into my sushi craving. I got a California Roll (all cooked – don’t freak), and ate about 4 pieces. It was so. crazy. good. I’m still craving cheeseburgers, though. :)


Best Moment of the Week: I don't really know?  Surviving the tornado that passed by out house was probably a pretty good thing - even if it was pretty crazy (trust me - I'll do a whole post about it).  We had Kye's birthday party and we had a good time.  LL was not in a great mood (missed nap due to tornado), but we still enjoyed celebrating his special day.  Other than that, it was a pretty tame week!


My Concerns or Questions: I don't have any of these this week!  Thanks to my doctor's appointment last week, I'm feeling good in this area!  I guess I do have one question - is it okay to be having Braxton Hicks at this point in my pregnancy?


Goals for the Week: I still need to schedule my dang ultrasound!  Enjoy my weekend is definitely high on my goal list.  :)

why would that be terrible to say?