Literally, The Scariest Day of My Life

The first weekend of March was literally a crazy one for us (as have most weekends lately).  This particular Saturday, we had the morning at home, and then LL and I had a tea party to go to at 3:00 and Kye's birthday party to go to at 4:00.


We spent the morning playing together as a family, enjoying each other, and cleaning house.  Because we had to be AT the tea party at 3:00, we put LL down for an early nap.  Usually she naps from 1-3, so we put her down at 12 in the hopes that she would nap from 12-2. It took her a little bit to go to sleep, but she was out by 12:30.


The weather was not bad in the morning, but we knew that there were some storms headed our way after lunch.  We got word on Facebook that there was a tornado spotted in Hahira.  That is about 18 miles from us, so we were concerned, but not really worried about it.


Shortly after this, Matt and I were on the couch when all of our power went out.  This is VERY unusual for us.  All of our power lines near our house are buried, so in 5 years of living in this house, this was only like the 2nd time that the power had gone out for anything longer than a blink.


While we were just sitting, we looked outside and noticed that it wasn't raining and that it was VERY calm.  Too calm.  Not at all like the rain that we had just seen earlier.  Matt said that he was going to go outside and look around and took Lola with him.  I just stayed on the couch.  While I was just sitting, I noticed a very loud sound.  We live close to the Air Force Base, so we're used to big jets going over our house ALL the time.  This sounded similar to that.  Except that I knew that they wouldn't be flying during this weather.  I looked and noticed that the front door was unlocked.  As I stood up to lock it, Matt came running in from outside.  Our eyes met, and he just looked at me and said, "Get her and get in the closet".  Let me just say this - we are NOT the type of parents that disturb a sleeping child.  We have NEVER gotten her out of her bed during a nap.  I looked at him and said, "Are you serious?".  I knew that he was, but it was the first thing that came out of my mouth.  He repeated himself, so I ran to her room.  I scooped her up with a blanket and immediately ran to the closet in our room.  We have a pretty big walk-in closet and it's the most interior room in our house.  Plus, it has no windows.


About the time that I left the living room, Matt made it from the back door to our front window.  He looked out across the street and saw a tornado.  Later, he said that when he was outside, he was watching the sky and the whole thing was just circling.  By the time he got to our front window, the tornado was going behind the house that was across the street from us.  He watched it long enough to see that it was heading away from us - not towards us.  But we're still talking about this thing being less than 1/4 of a mile from our house.


Being that LL and I were in the closet, I had no idea about any of this.  All I knew was that there was a tornado (there had to be for him to tell me to get her and get in the closet - this much I knew), and that it was extremely close.  Needless to say - I was FREAKING out.  The only thing that I could think to do was pray.  I would pray out loud and as soon as I got done, all I could think to do was start again.  Poor LL had no idea why she was awake, where we were (we had no power, remember?  Obviously I didn't take the time to grab a flashlight, phone, etc.), or what in the world was going on.  She kept saying, "I just want to lay down and go to sleep!".  She also asked where we were a lot.  I just told her that we were in Mommy and Daddy's closet, that there was a lot of wind (trust me, we could hear it) and that we were going to pray to Jesus to keep us safe.  It really surprised me, but she never really got upset or scared.  I think she was just more confused than anything.


After what felt like forever, Matt came in and told us what was going on.  I grabbed a pillow and the iPad so that we could camp out in the closet for a little bit longer.  While Matt saw the tornado go away from our house, he had no idea if it would turn and come back, OR if there was another one that might form behind it.  We thought we would rather be safe than sorry and hang out in the closet for a little while longer.  LL and I stayed in there (this time with the door open) while Matt kept an eye out around our house.


Eventually, we kind of figured that everything was okay and that we could come out.  The tornado warning for our area was lifted, so we felt much better.  Now came the tough decision: what do we do?  We had no power.  We have a well at our house.  No power = no water.  For things like the toilet.  Which is a necessity.  It also meant that we could only open the fridge a limited number of times before all of the "cold" got out.  It was only 2 in the afternoon and we had NO idea how much damage the tornado did or when it would come back on.  They were re-directing traffic to our road (which is dirt - not smart!) so we also knew if we wanted to get out, we needed to do it soon.  We decided to go to Matt's parents house and stay there for the night.  It's a good thing that we did because our power ended up not coming back on until about 5 am.


The next morning we went to church (it was a BEAUTIFUL day, BTW) and on the way home we really got to see the destruction that this tornado did.  We learned on Monday that this tornado rated a 3 on the scale.  The scale only goes 1-5.  This thing definitely wasn't a baby by any means!


Here are a few pictures of the damage that was done less than two miles from our house. 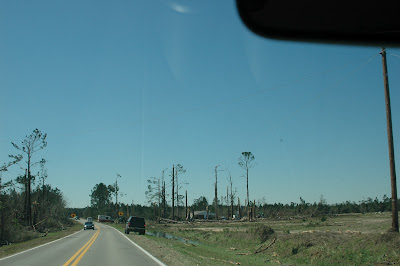 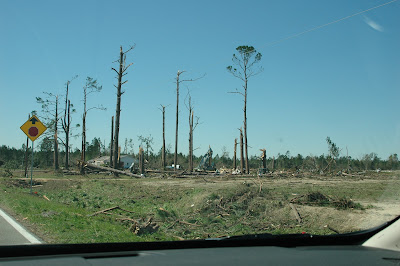 This house is completely unlivable now.  While the front doesn't look too bad, the entire back of it is gone. 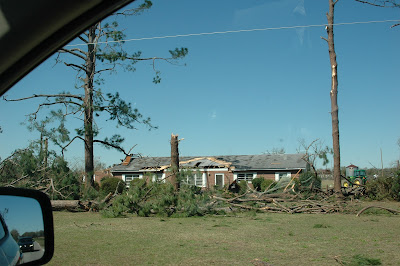 These next few pictures are a little farther down from our house.  This is right where three counties come together at Walker's Crossing. 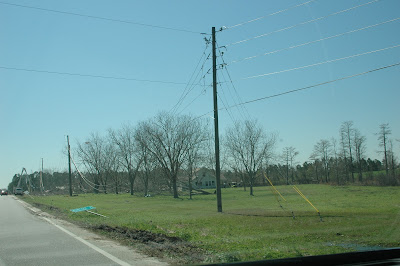 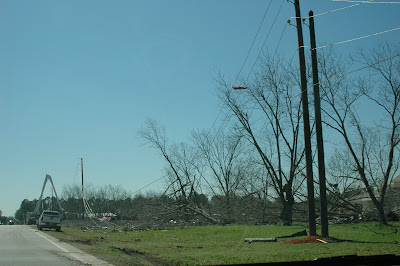 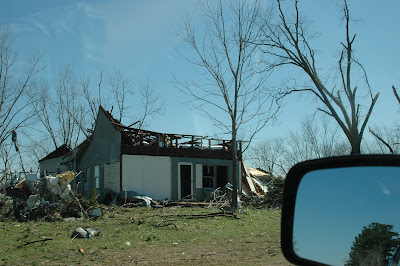 This is a video that I took of the road across the street from us (where the tornado came down) on the way home from church.


There were about 30 homes damaged in this tornado - 15 of which are completely gone.  Luckily, not one person was hurt in all of this.  I can honestly tell you that sitting in the closet, holding my baby girl, hearing the wind, and having NO CLUE what was going on (other than the fact that I knew that there WAS a tornado and that it was CLOSE) was the scariest moment of my life.  I pray that I never have to go through that again in my lifetime.  Luckily, we live in an area that this is not common at all.

If you don't have a plan for what to do in specific situations (fire, tornado, break in, etc) PLEASE sit down with your spouse/significant other and talk about it.  Even if you think that it's something that will "never happen to you".  Matt and I had talked about this before, which is why I knew exactly what was going on when he told me to grab LL and go into the closet.  We had a plan.

Email ThisBlogThis!Share to TwitterShare to FacebookShare to Pinterest
Labels: tornado

that is scary but I'm glad to hear no one was hurt.

so so scary! so glad you guys were okay through it all though and it IS smart to have a plan. I just always assumed we run into the kids bathroom but i know now i need to do a better job of having flash lights available in locations throughout the house!