After much debate this year, we finally decided on a Rapunzel theme for LL's birthday.  We really went back and forth between Rapunzel and Tinker Belle, but Rapunzel won out in the end.  If you haven't seen the movie Tangled, then all of these decorations won't make much sense to you.  ;)  We decided to have the party at my mom's house because, well, our house wouldn't fit all of the people that we had invited!  It really worked out GREAT and we had plenty of room for everything.

I'm really not much of a party planner.  That's my sister's specialty!  But with this party, I really wanted to go all out with the theme and make it really special.  I did TONS of looking around online for ideas, TONS of preparation, and TONS of brainstorming!  I will go ahead and say that I had LOTS of help with getting all of these things together.  There is no way that I could have accomplished this all without my mom, step-dad, sister, and husband.  But the one thing that I will take full credit for is all of the ideas.  Yes, I got lots of them online, but I pieced together the ones I like to really make the perfect party for LL.

I'm VERY happy with how it turned out, and I kind of impressed myself in the process! 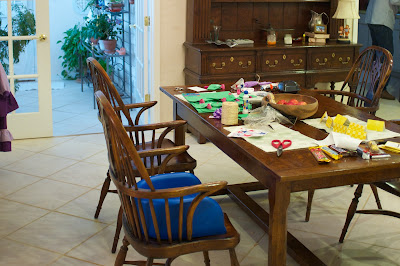 Trying to get last minute stuff in place. 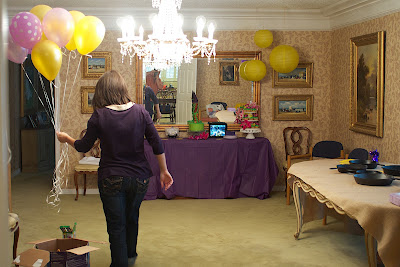 My wonderful sis helping out.  :) 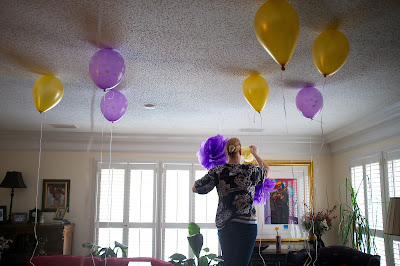 Helping or goofing off?  :) 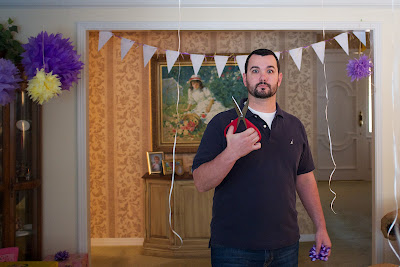 Alright...here are some pictures of the finished product!  Here's the walkway leading up to the house. 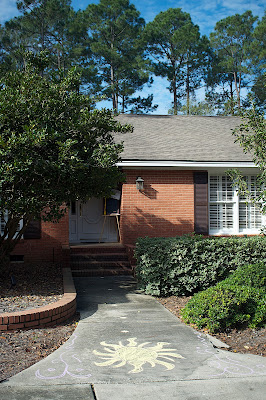 In Tangled, there is a "sun" theme throughout the movie.  While we didn't have suns all over the place at the party, I did want them to make an appearance.  My sister did a WONDERFUL job drawing this one on the walkway up to the door!  I for sure could not have done this! 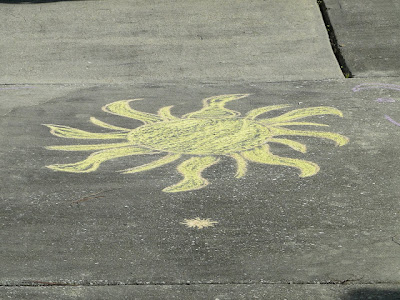 The doorway.  This braid literally took me, my mom, and my step-dad 1 solid hour to braid.  The yarn was SO LONG and was a mess to keep untangled (no pun intended).  By the end of that hour, we were all EXHAUSTED!  The colors purple and yellow are also a theme throughout the movie and the major colors of the party. 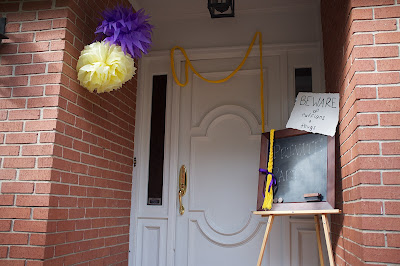 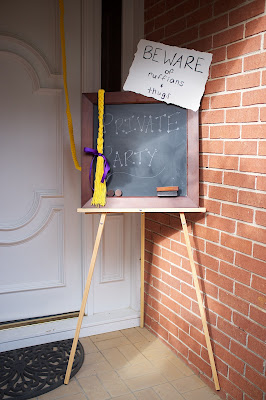 Balloons on the mailbox! 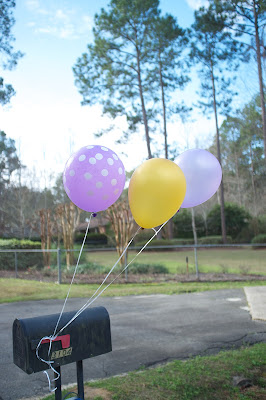 This is the living room of my mom's house.  We had the movie playing on that TV, a coloring table set up with Rapunzel coloring sheets for the kids (Rapunzel LOVES to paint in the movie, but we weren't about to try that with a bunch of 2/3 year olds - haha).  The banner hanging up looks like the banners that were on display in the movie when Rapunzel makes it to the festival.  We also had purple and yellow pom's and balloons. 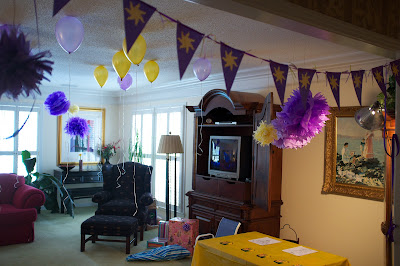 This is the dining room where we had the food, favors, and LL's slideshow set up.  We moved the table against the wall to make room for people to move around more and had tons of chairs set up so that people had more room to sit. 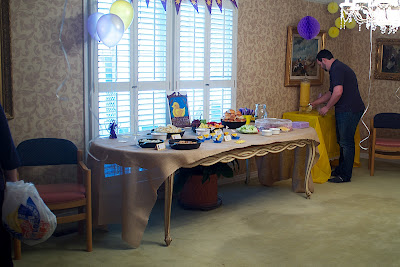 For the favors, I ordered these ADORABLE cookies from this site on etsy.com.  The girl was SUPER nice and worked with me on making sure that the cookies arrived on time.  Can you believe that this is a cookie?  We displayed it during the party and let LL eat it later.  :) 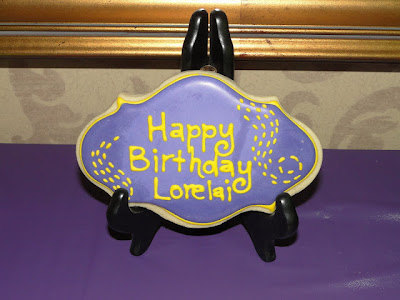 This table held the part favors, Rapunzel tower, cupcakes, and slideshow of LL the past year. 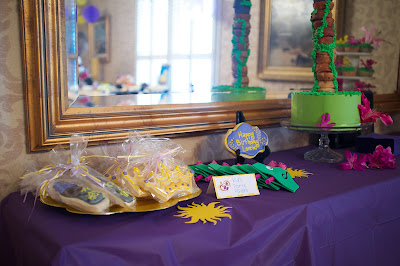 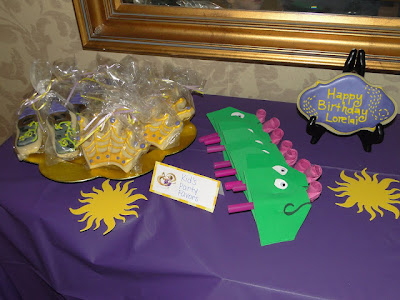 When we first started planning the party, I told my sister that I wanted the theme of the food table to be the Snuggly Duckling.  She did an AWESOME job at painting this sign that looks exactly like the one from the movie!  The most amazing thing?  She's never painted before!  Ever!  I was SUPER impressed with it! 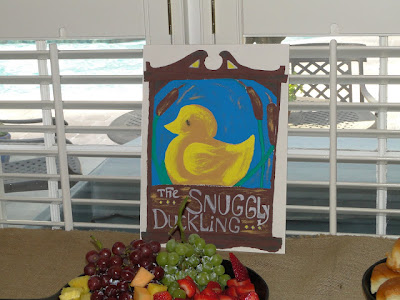 Instead of using a regular table cloth for the table, I got like 4 yards of burlap from Hobby Lobby.  I thought this would be more "rustic" than having just a regular one.  The Snuggly Duckling is not exactly a fancy place, so I thought this fit in well!  We also borrowed TONS of cast iron skillets from family members to serve the food in.  In the movie, Rapunzel uses the skillet to knock Flynn Rider out with, and she ends up carrying it for the rest of the movie.  I thought it was a cute touch and it also went along with the Snuggly Duckling theme! 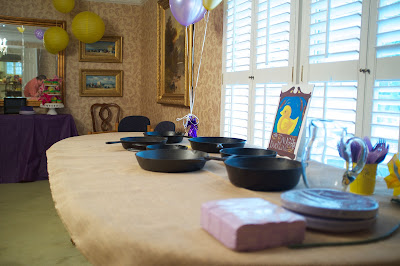 Here's what was on our menu: we had "hazel nut soup" (really just spinach dip).  This is what Rapunzel asks her "mother" - Mother Gothel - to make her for her birthday dinner.  I just substituted spinach dip in because I never actually found a recipe with hazel nuts in it that both sounded good and was appropriate - haha. 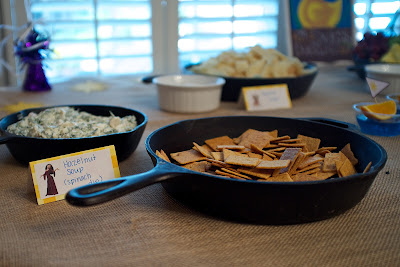 Flynn Rider boats to go along with the boat they rode in at the end of the movie. 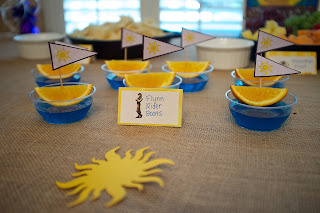 Maximus Fruit.  Maximus is a horse who eats TONS of apples throughout the movie.  I had originally intended on just serving "Maximus Apples", but I figured the guests would enjoy a variety of fruit more.  :) 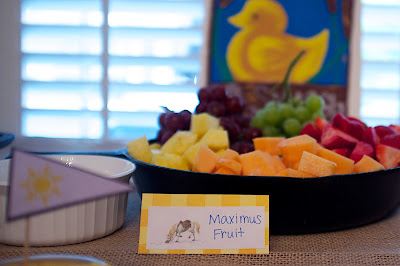 Snuggly Duckling Sammies.  Rapunzel and Flynn don't ever actually eat anything while they're at the Snuggly Duckling, but I figured this fit into the theme well. 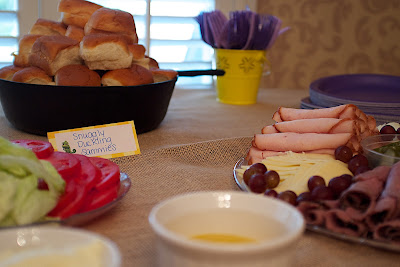 Paschal chips.  Pretty self explanatory and no story behind it. 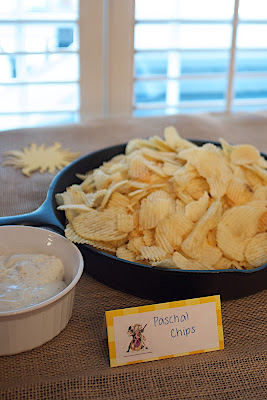 Here's the part that I'm really proud of.  I found a picture online of a Rapunzel tower that someone had made.  It didn't really come with instructions, so I just had to kind of wing it.  It's a little abstract, but I think it turned out WONDERFUL!  It wasn't actually edible, but I thought it really added to the decor.  And I was SO proud of how it turned out.  And I totally did it 100% on my own.  :) 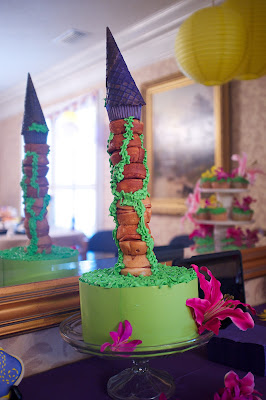 I don't know if the cupcakes really have a story.  It was another idea I got online.  They're just supposed to like like grass and pretty flowers - haha.  I just used green icing for the grass and stuck fake flowers in the top.  I think they turned out super cute! 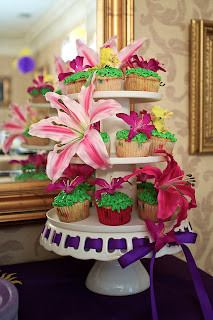 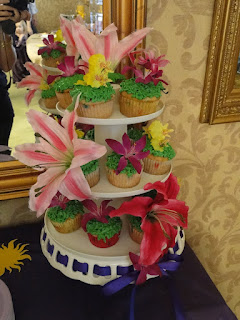 I also made a yellow punch called "Magic Golden Flower Punch".  In the movie, Rapunzel's mother gets very sick and drinks a tea made out of a magic flower.  This is what makes Rapunzel's hair magic since her mother was pregnant with her when she drank it.  Also hanging up in the dining room (that you can sort of see in the pic of the Rapunzel tower) were yellow lanterns.  The whole point of the movie is that Rapunzel wants to get out of the tower to go and see the lanterns that are set off (thousands of them) every year on her birthday.  Originally, we had intended to buy some Chinese lanterns and actually release them, but that's when the party was planned for later in the day.  When we had to change the party to the morning, the lantern idea just kind of went out of the window.  I didn't think it would be quite as effective in the middle of the day.  Instead, we chose to hang them up around the house as decorations.

I really do need to thank a lot of people for helping me!  Mrs. Becky for baking 40+ cupcakes and making the spinach dip.  My mom and step-dad for spending ALL day running errands with me, letting me use their house, and helping me with EVERYTHING!  Gino and Emily for taking pictures for me - I never took a single one!  Gino also kept LL and Ben occupied so that my sister and I could work like crazy people.  My sister for being amazingly creative, supporting, willing to do ANYTHING and dealing with me being a crazy person.  Matt for letting me put him on whatever job I needed done at the time!

Up next: pictures of the party and all of the fun that we had!

I was beyyyyyyond impressed!!!!!!!! My favorite was the frying pans, the perfect touch. I'm glad you explained everything on here...I have not seen the movie very many times so I didn't catch a lot of the little touches!

Super cute!! I love all the special touches. I go totally nuts with planning birthday parties, once I get in to it it's hard to stop with all the details. Everything came together wonderfully and looks great!