We had LL's three year old well-visit on February 6 - just one day after her birthday.  Here are her stats! 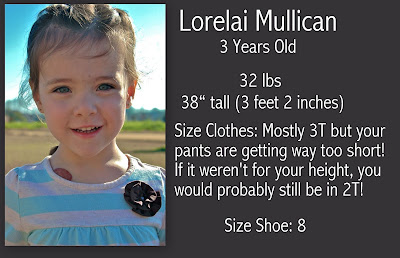 Here is some other information about her visit:


That was pretty much it for the appointment.  No shots at all!  They did say that her 4 year appointment will be a big one.  They'll prick her finger again AND give her a good amount of shots.  Yay!  Something fun to look forward to!  At least we have a year to prepare - haha.  I am so thankful that we have such a healthy little girl who is growing and developing so well!  We are blessed for sure!

We had a PA at our doctor's office that I wasn't crazy impressed with either. It seemed as if he never tried to do anything else for Preslei when she was sick. He's gone now :)

We have Preslei's 4 yr old appointment in a few weeks and I'm DREADING it b/c she's supposed to have like 4 shots. Ugh. :(