One of the perks of Matt’s new job with Aflac is that they offer TONS of incentive to do well within the company. I LOVE that and think that it’s a great way to encourage and motivate your employees! I also think that it’s great because it’s ever changing – meaning you’re not winning the same things every single year. Some of the incentives are products, money, and, best of all, free trips! Matt has been working his behind off (I am SO PROUD of him and how great he’s been doing!) and this summer he officially qualified us for our first trip. The upside: it’s a free trip. The downside: it was to Atlanta. Ha. For people who live in Georgia (and have family in Atlanta), this doesn’t initially sound like the best trip. This trip is a trip that you can ONLY qualify for in your first year. Meaning, if you don’t make it the first year, it’s just gone and you miss it. A lot of the other trips “cycle through” meaning, if you don’t make it- you have a chance to go back to that same location in a few years. The reason that this trip is to Atlanta is because the Aflac national headquarters are in Columbus, GA which is very close to Atlanta. So for us, it wasn’t the coolest city to visit, but to people from somewhere like Arkansas, I’m sure it was more exciting.

Another thing that Aflac does is they give you the option of either flying or driving (if it’’s not too far) to your location –– expenses paid. Matt and I drive to Atlanta ALL THE TIME. Literally, we make the trip at least 5+ times a year. It is absolutely the worst drive in the world to me. On the other end, we NEVER fly anywhere. Ever. I’’ve only flown once in my life and that was in highschool. Since it was paid for us either way, we opted to fly. Why get there in 4 hours when you can make it in 1? I’’m not gonna lie, we got TONS of crap from other people for this. Especially other Aflac people who were either going or had been on this trip before. Regardless, we stuck to our guns and decided to do our vacation how WE wanted, not how other people thought we should.

Our trip was Nov 3-6 which was a Thursday –– Sunday. This meant that I had to miss 2 days of school (bummer). Our flight was scheduled to leave Valdosta at 11:10 Thursday morning. We got up, packed, took LL to Grammy’’s, and then headed to the airport. Grammy and Pop were going to bring LL by when it was closer to take-off to see us before we left. We got there, printed our tickets, checked our bags and proceeded to wait. LL got there about 10:45ish and not long after we started to go through security. Grammy, Pop, and LL continued to stay so that LL could see the plane take off. We went through all of security and waited in the terminal right where you board the plane. Let me go ahead and tell you, while I was really excited, I was also VERY nervous. I was newly pregnant on this trip (we had literally JUST found out the week before), I’’m afraid of heights, and I had only flown once. I was a nervous wreck on the inside!

Waiting to go at the airport.

They finally started boarding the plane and calling by sections. This is when things started to go downhill. Matt and I were both looking at our tickets and couldn’’t for the life of us find what section we were in. Matt finally went and asked the guy who was boarding everyone what section we were in and they guy told him, “"You’’re not in a section because you don1’’t really have a ticket. You’’re on standby.”" Umm……..what?!?! We had no idea about ANY of this! They called the last section, and Matt and I were able to talk to the guy a little more. Basically, there were 4 of us on standby (and NO ONE on the list knew they were on standby!). Delta, in an effort to make more money I guess, oversold the plane. This is actually pretty standard practice because in bigger cities, you have TONS of people not show up for their flight. In Valdosta, not so much. Basically, there were 4 of us on standby and 1 empty seat available. Matt and I were #’’s 1 and 2 on the list, so we have first pick of that seat. Umm……I wasn't flying by myself, and I sure as heck wasn’’t going to drive while Matt flew. So we gave up that seat to the girl who was behind us. This is the part where we started to get REALLY pissed. I mean, we had just been at the airport for 2 hours for a flight that we weren't going to get on. They said we could get on the next flight, but that one wasn’’t until 5:00pm –– NO THANKS! Matt demanded that they get our luggage off the plane because we knew at this point that we weren’’t going to be flying period.

They made us go back out into the lobby of the airport and this is the point where Matt got on the phone with Aflac. Initially, we thought this was an Aflac problem and something they had done wrong.  After Matt talking to the lady with Aflac, and me talking to the people at the desk at the airport, we quickly realized that this was DELTA'S fault - not Aflac.  But here was the problem - the next flight wasn't until 5:45 that evening.  So if we took that, we'd miss all of the Aflac stuff going on that evening.  Plus, we'd be stuck waiting around Valdosta for another 6ish hours.  Our other option was do drive up there ourselves - but the problem with this was that since Aflac had already paid for our plane tickets, the wouldn't reimburse us for gas $$, meaning we'd have to pay for the trip out of our own pocket.  Not cool for a trip that was SUPPOSED to be free.

Then, I really started talking to the guy behind the counter and he started explaining that they would reimburse us for our ticket amount if we wanted.  At first I thought, "Okay, so what.  It's only from Valdosta to Atlanta.  The tickets can't be more than $200."  That's when he said, "It should be somewhere around $1,000.00.  Each."   Ummm...EXCUSE ME?!?!

Turns out, Aflac books your flights pretty close to the date that you're leaving.  Hence why we were on the standby list.  But what else does that mean?  Tickets are more expensive!  The guy at the airport ended up cutting us a check for $1300 each, AND we have travel vouchers for plane tickets in those amounts, too.  How awesome is that?!  Needless to say, we took the money and ran with it!  It was funny to us, because SO MANY people made fun of us for flying there, but we're the ones who ended up laughing all the way to the bank!

We ended up driving to the hotel ourselves and got there around 3ish.  We checked in and rested for a little while because we didn't have anything to do until about 6.  At this point, I was still VERY early pregnant (about 5 weeks), so I was exhausted and welcomed the chance to rest.  Especially after our crazy morning!

Not so upset anymore!

The inside of the hotel.

View from our room.

The next day, Aflac had scheduled for everyone to take a bus to the national headquarters in Columbus, GA (about a 2 hour trip).  I wasn't feeling great at all, plus I knew that it would be TONS of walking, so I decided to just stay at the hotel and rest.  Matt was really cool with it, and it was nice to have a day just to myself.  It doesn't happen often at home!

I had to get lunch from a shop in the hotel since everyone was being fed while they were on the trip.  This sandwich and a drink were like $20!  Not cool, but I didn't really have another choice.

Enjoying my day to myself!

This is Paul Amos.  He is one of the founding brothers of Aflac.  He's in his mid 80's and he still goes to work every day!

That night was our dress up night at dinner.  We don't get all dressed up much anymore, so it was fun to get to do that!

One of my new fav pics of us!

The names of all of the people in Matt's district who made the trip.

Quite possibly the FUNNIEST thing from the trip was when Emily's mom, Jodi, (who, obviously, also made the trip) talked another guy from Matt's district, Jason, into going up front to "dance" with her after dinner.  Then, when they got up there, she somehow got the band to pull him up for a solo.  He had to sing by himself ("Aint No Mountain High Enough") and he was NOT a good singer AND he had no clue what the words were.  I don't know if I've ever laughed so hard in my life!

Saturday was our activity of choice.  Since it was his trip, I told Matt I was okay with whatever activity he chose.  He picked the aquarium.  While we've both been (several) times before, we've never actually been together.  It was neat to get to experience it at the same time.  Plus, since we'd seen it all before, we could just take our time and not be in a hurry. 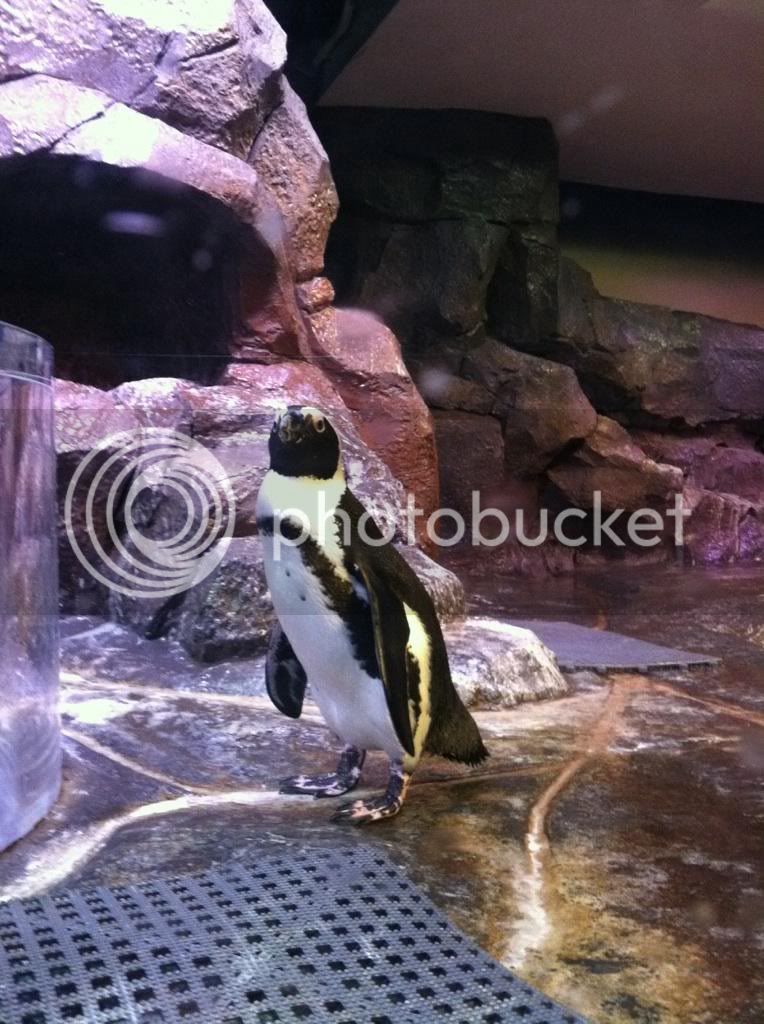 In the penguin tube!

That night was our last dinner with Aflac.  They also had an "Aflac Idol" and you KNOW Matt had to participate.  He's a music guy AND he loves attention so it was right up his alley.  He ended up singing "Hey Jude" and he ROCKED it!  I took tons of pictures, but they all turned out blurry because it was so dark.  Honestly, he was a shoe in for winning the whole thing (really!) but then some old lady came out and completely rocked it to "I Will Always Love You".  She totally stole 1st place from him!  But she did do great, and Matt still had a blast.

All in all, it turned out to be a GREAT trip!  I can't wait for many more to come!

Omg! What a funny post! We have flown out of Valdosta to Atlanta twice, so I'm definitely not hatin! Though it has never been on our dime, bust still. It's so nice to get there so quickly! That is AWESOME that you got reimbursed for the tickets, especially for that amount! The pictures of Matt on the bed after he made it rain is hilarious. Also, why am I talking/typing so ghetto?? Haha

That picture of jason seriously made me laugh out loud!!!!!