Matt just had his two year anniversary with Mediacom.  This job has been the biggest blessing - he is doing well in it and he loves it!  Around July/August of 2014, they announced that they would be doing an incentive trip for the top 10 Senior Account Executives in Business Sales (along with the top 10 OnMedia and top 10 Residential Sales).  So from early fall through the end of December, Matt's main goal was to make it into top 10.  Even though cut off was right before Christmas, we didn't find out official numbers until mid-January.  When they came in - he was number 10!  I didn't care what number he was as long as he made it - haha.  But for his first full year with the company, making top 10 is amazing!

The trip was set for March 18-21 (which meant that I had to take three days off of work).  While we were gone, we decided to split the kids up while we were gone.  Since LL still had school for three days, it seemed like the best option for both of them.  She would have to be dropped off at school each day, and it seemed better for Cooper to not have to ride an hour twice a day just to get LL to and from school.  Cooper spent the vacation with Grammy and Pop and LL spent it with Gigi and Poppy.

Our flight took off from Tallahassee at 7am.  Tallahassee is about 1.5 - 2 hours away from us.  We wanted to fly straight from Valdosta, but that didn't put us in Tucson until the evening, so leaving from Tallahassee was the better option.  We debated driving down the night before and staying at a hotel vs. driving super early, but we decided to just stay at home and leave early in the morning.  We got up at 2:30 and were on the road by 3:45 am.  We got to the airport right at 6:00 am, so it was perfect timing. 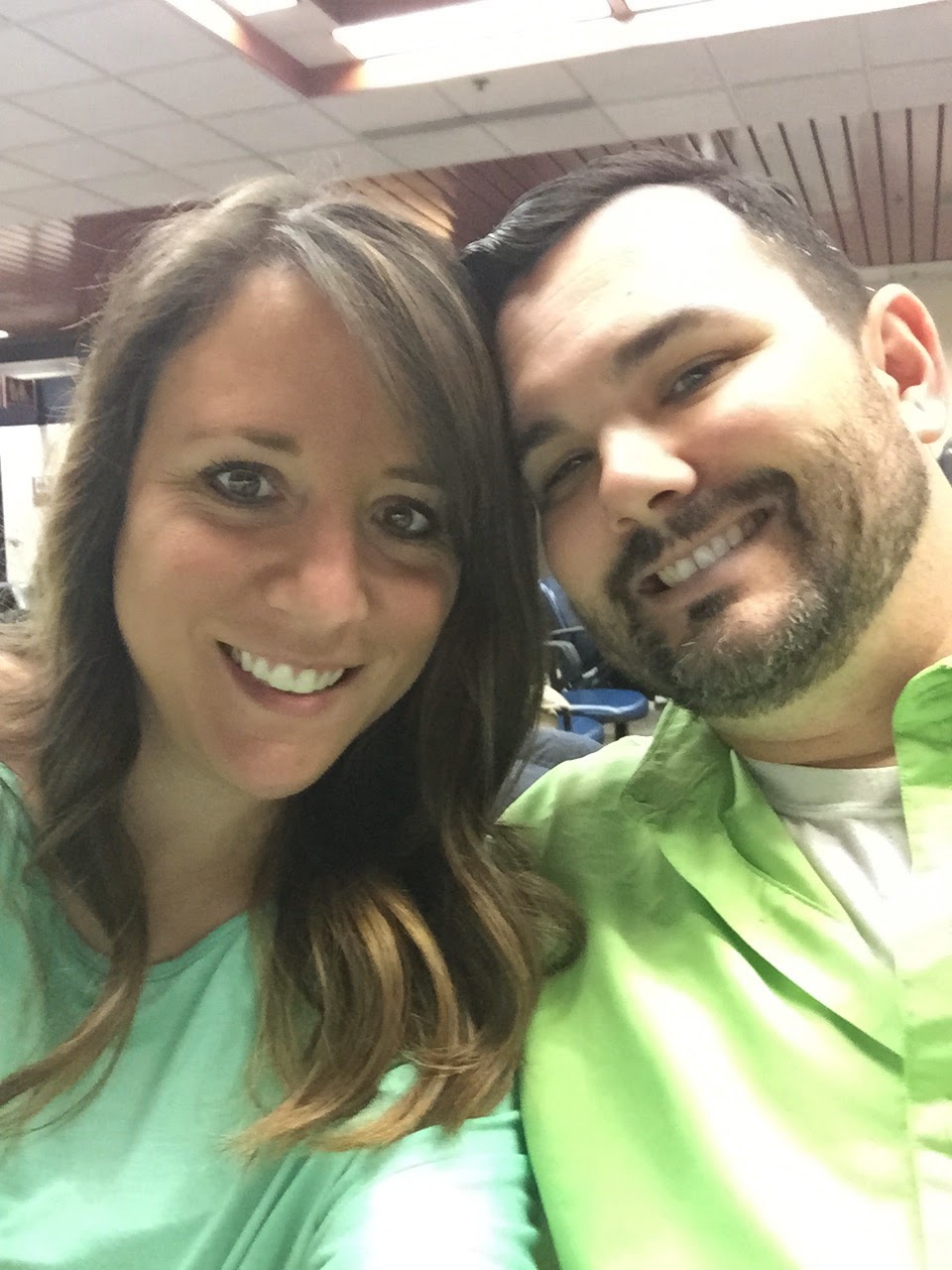 I sent this picture for LL to see before school.  She is super interested in flying. 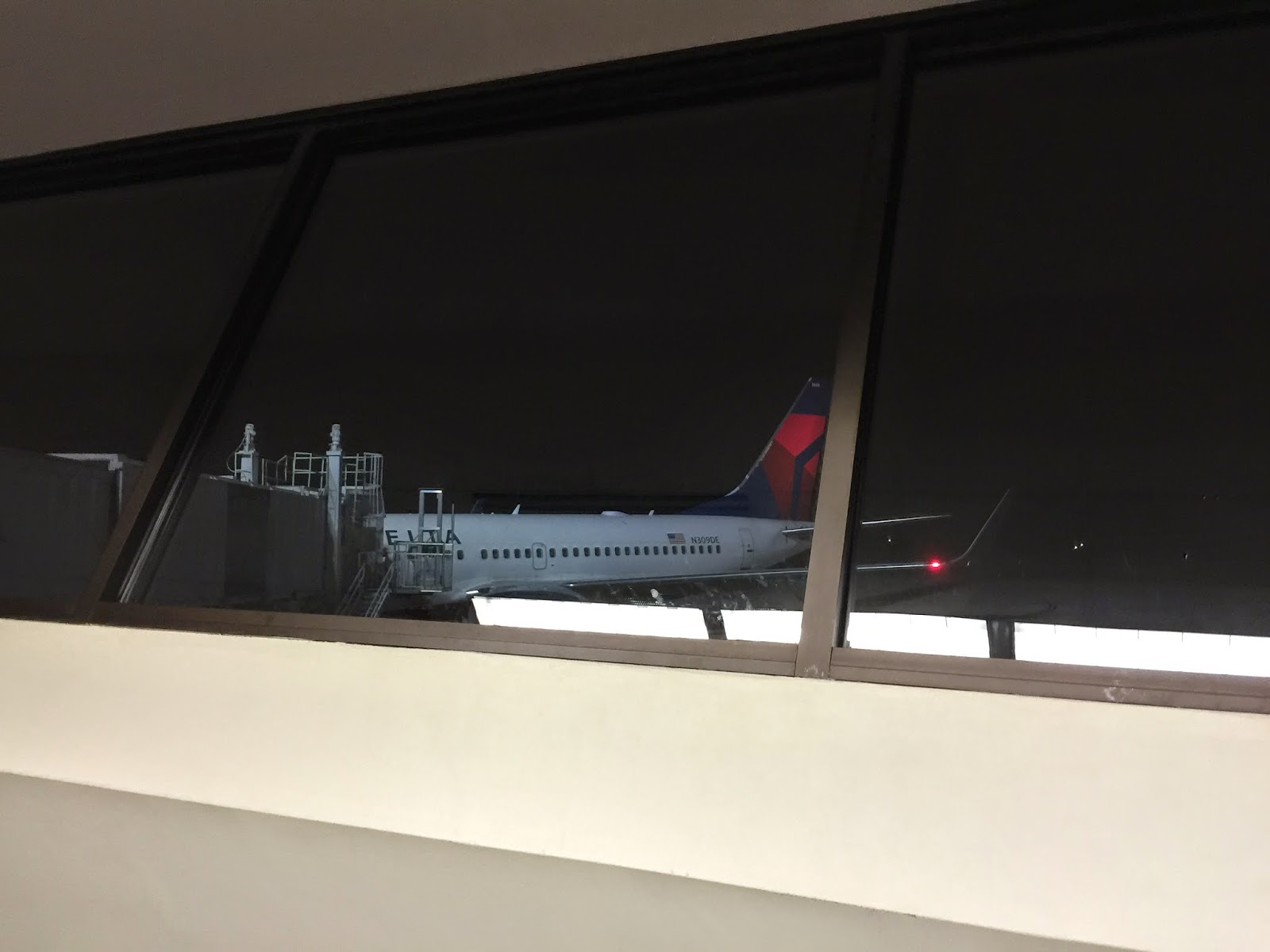 We got to the Atlanta airport by 8am (and our next flight to Tucson wasn't until 11 am), so we had plenty of time to hang out and eat some breakfast. 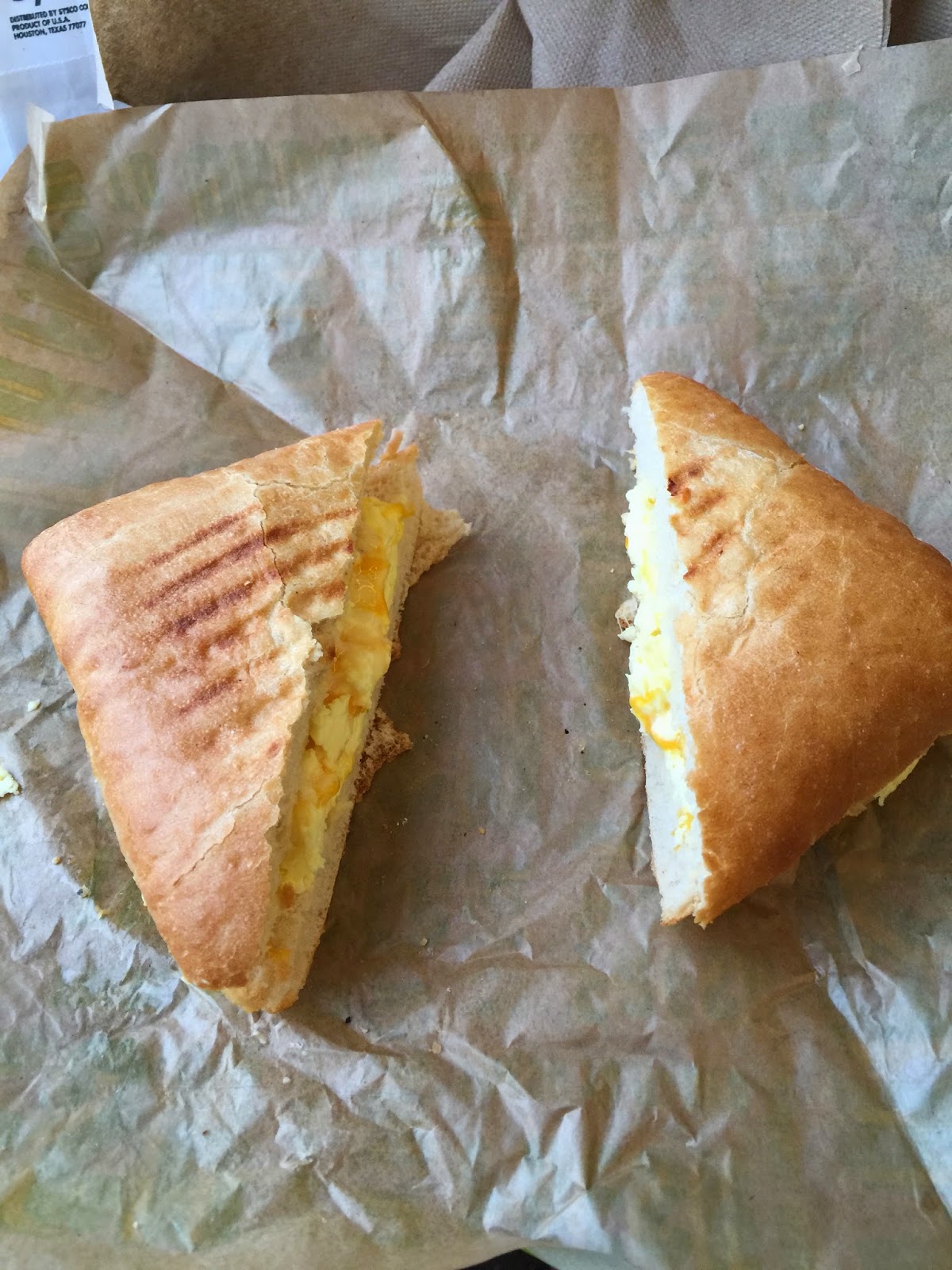 Our flight from Atlanta to Tucson was about 3.5 hours.  We had plenty of time to read, watch movies, and try to nap. 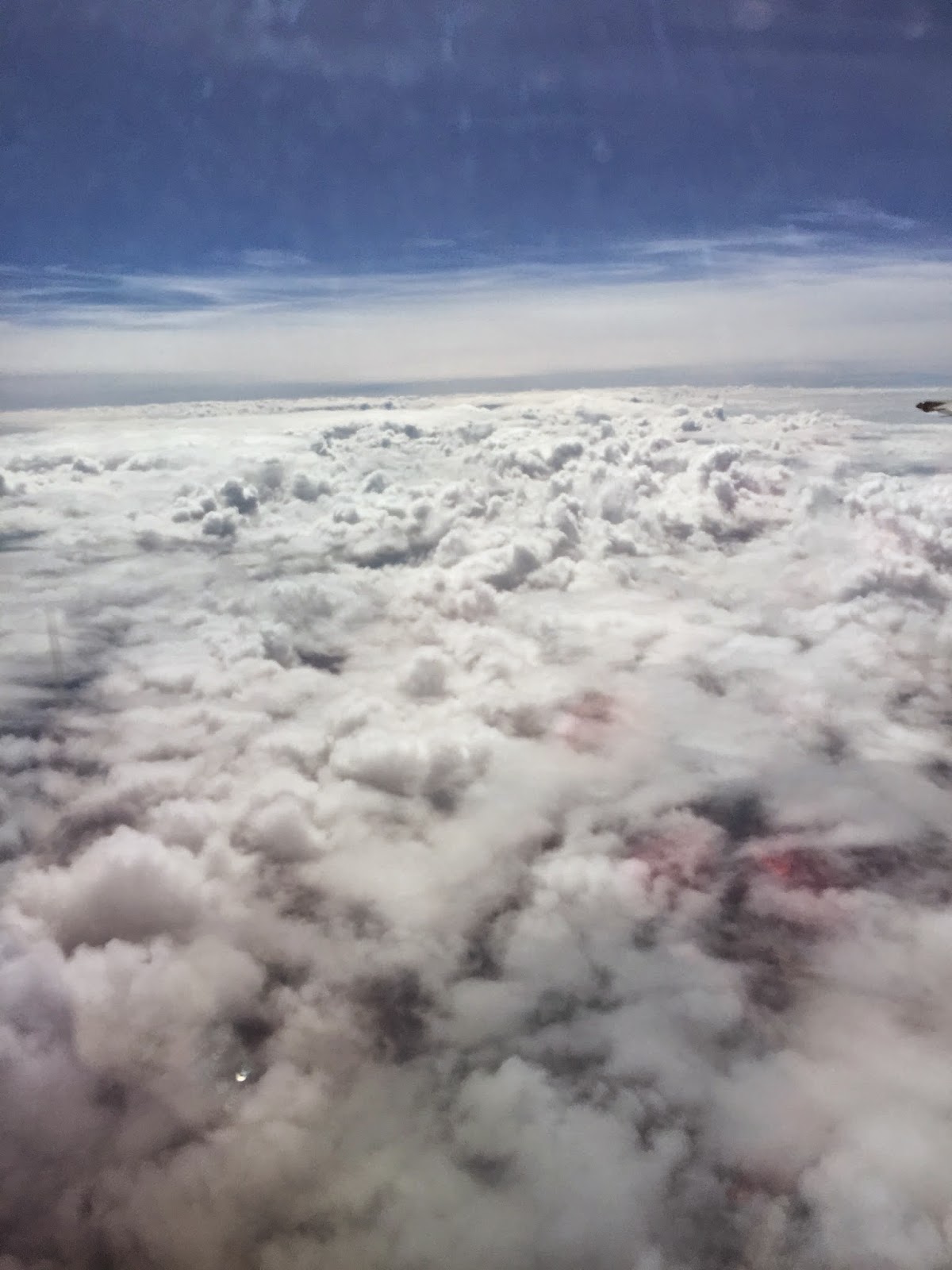 Getting photobombed by a flight attendant - haha. 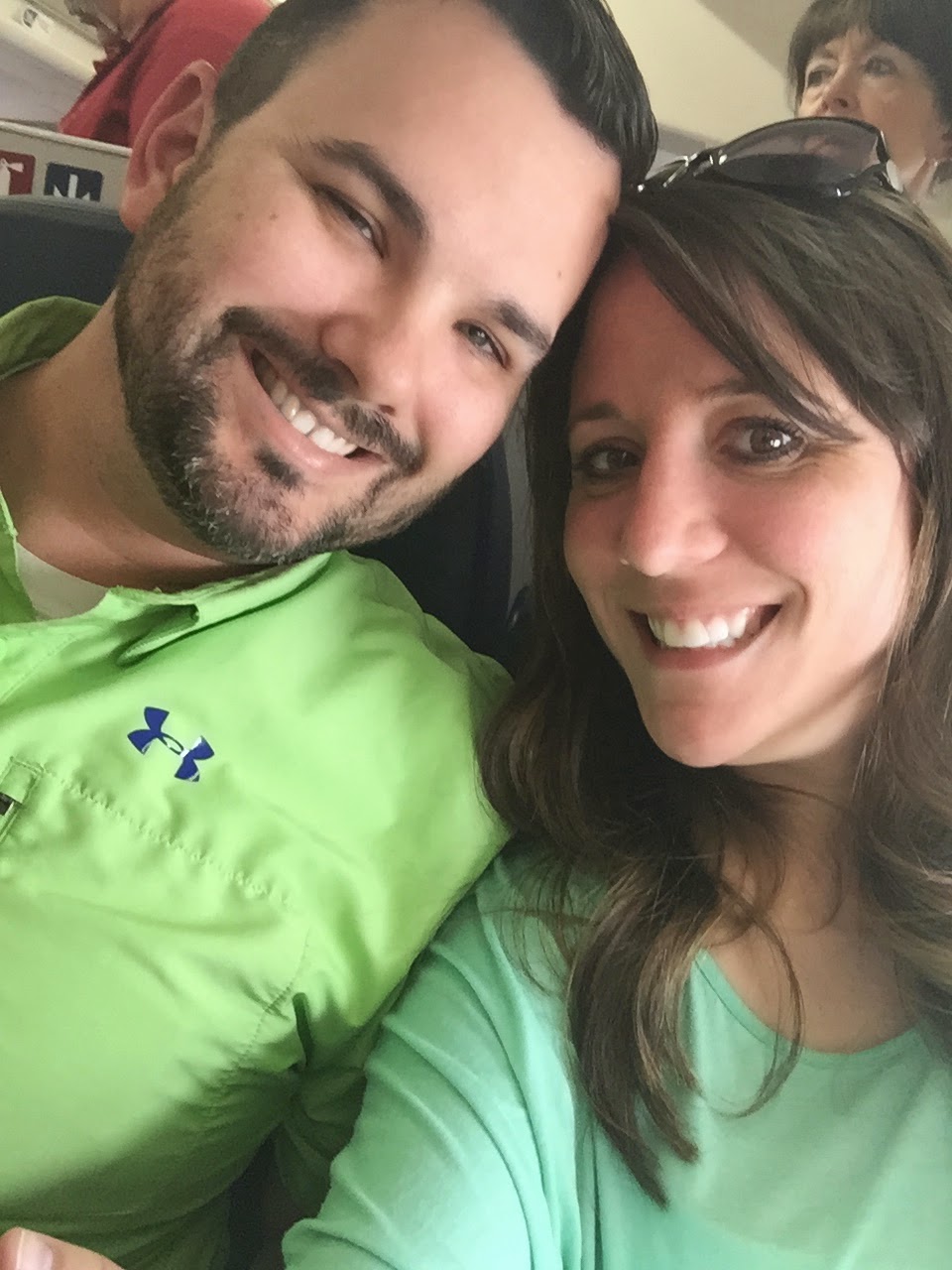 When we got to Tucson, it was only noon their time.  The three hour time difference between there and home kicked my butt!  We had to wait about 45 minutes for a shuttle to our resort (which was about 45 minutes away), so we just had more time to kill in the airport.  What I was most excited about was seeing all of the cacti outside!  I've never seen cacti growing naturally - it was so awesome! 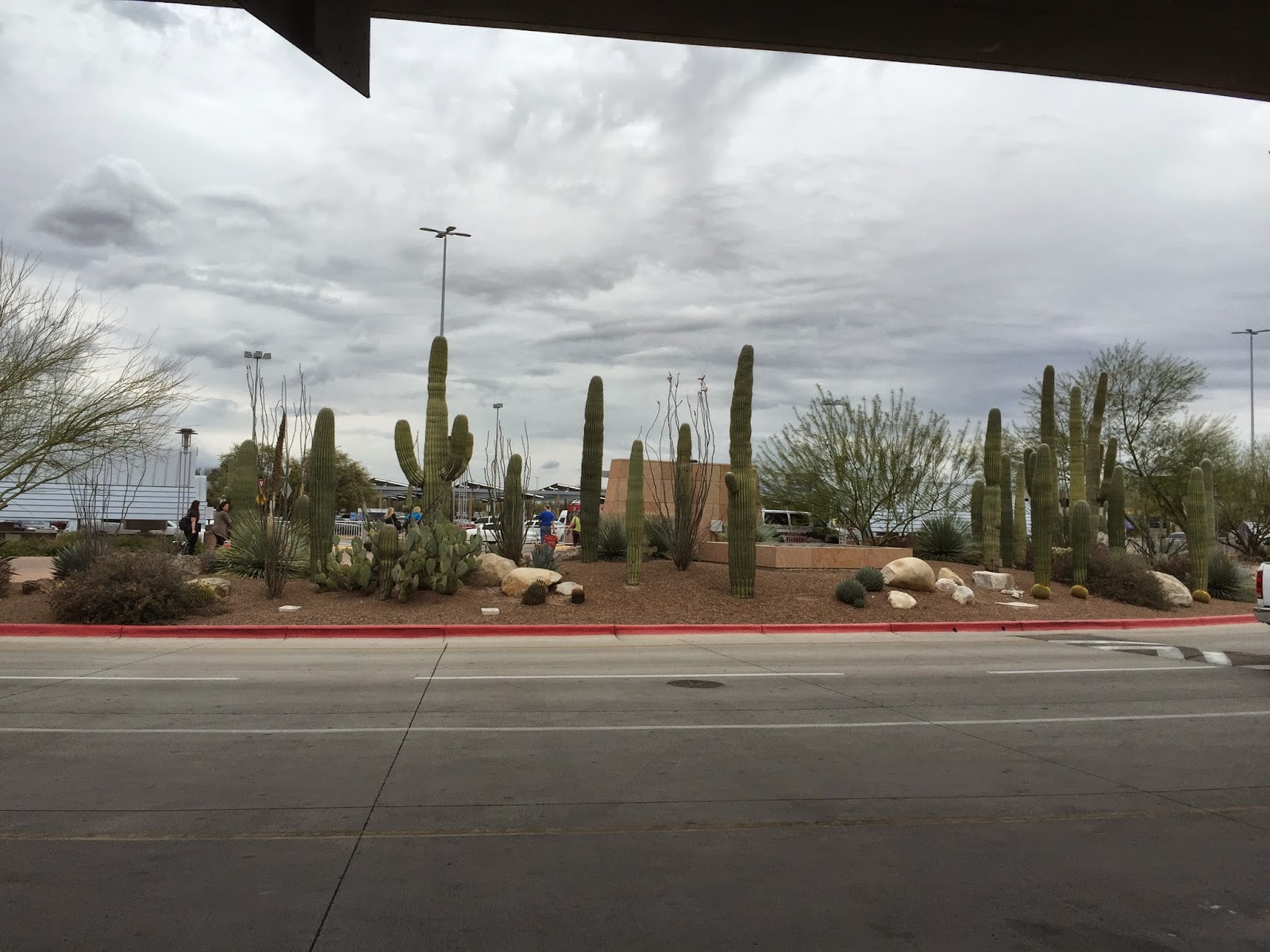 We got to the resort about 3:00 Tucson time.  We stayed at the Westin La Paloma - and it was beautiful!  We checked in to our room and tried to take a little nap.  It was 6:00 pm our time and we had been up since 2:30 - we were exhausted!  We still had about 3 hours to kill before our dinner, so we both napped for about 2 hours. 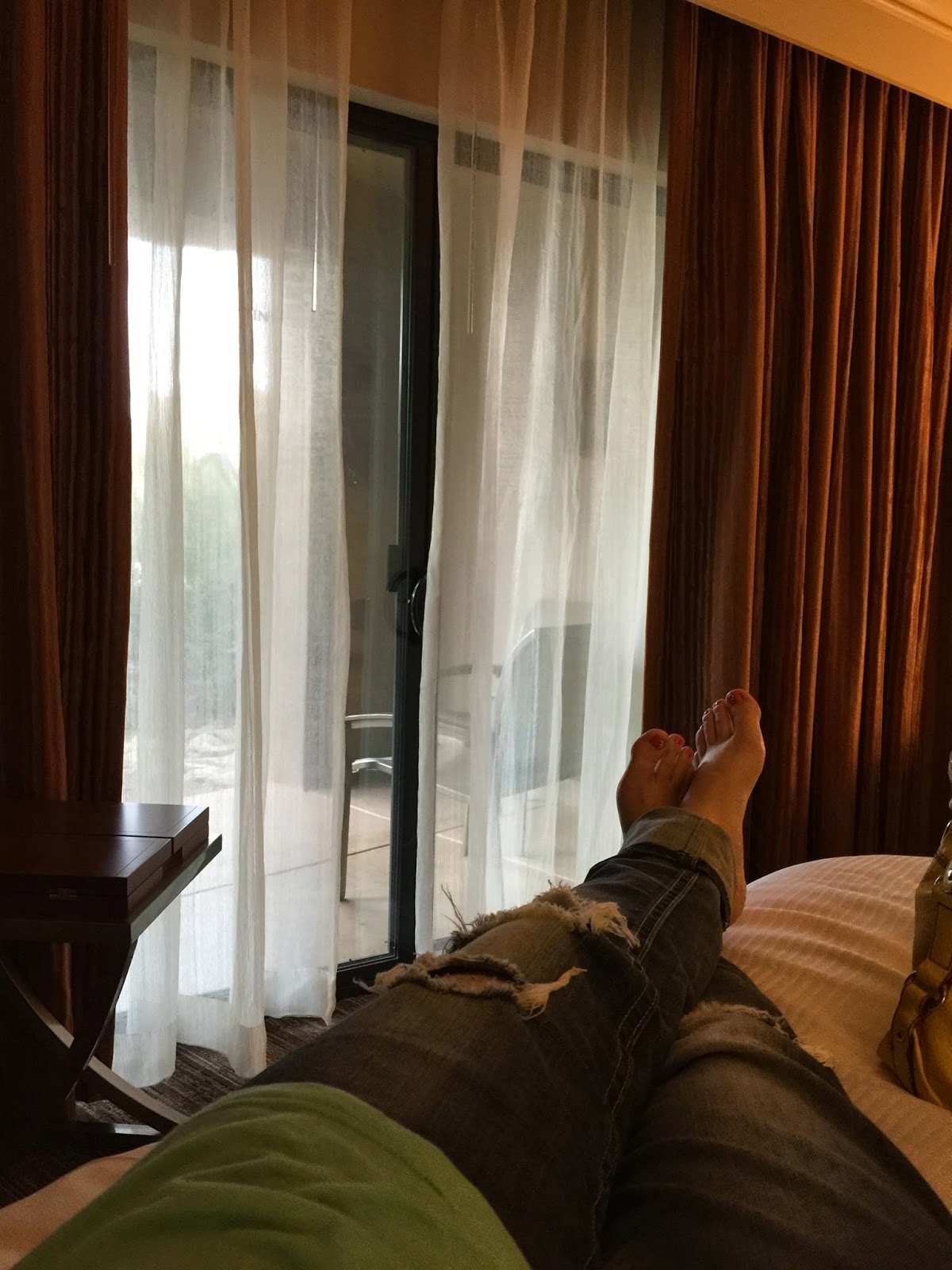 We had a ground floor room that faced the pool area of the hotel.  This was our view - so pretty and so close to walk. 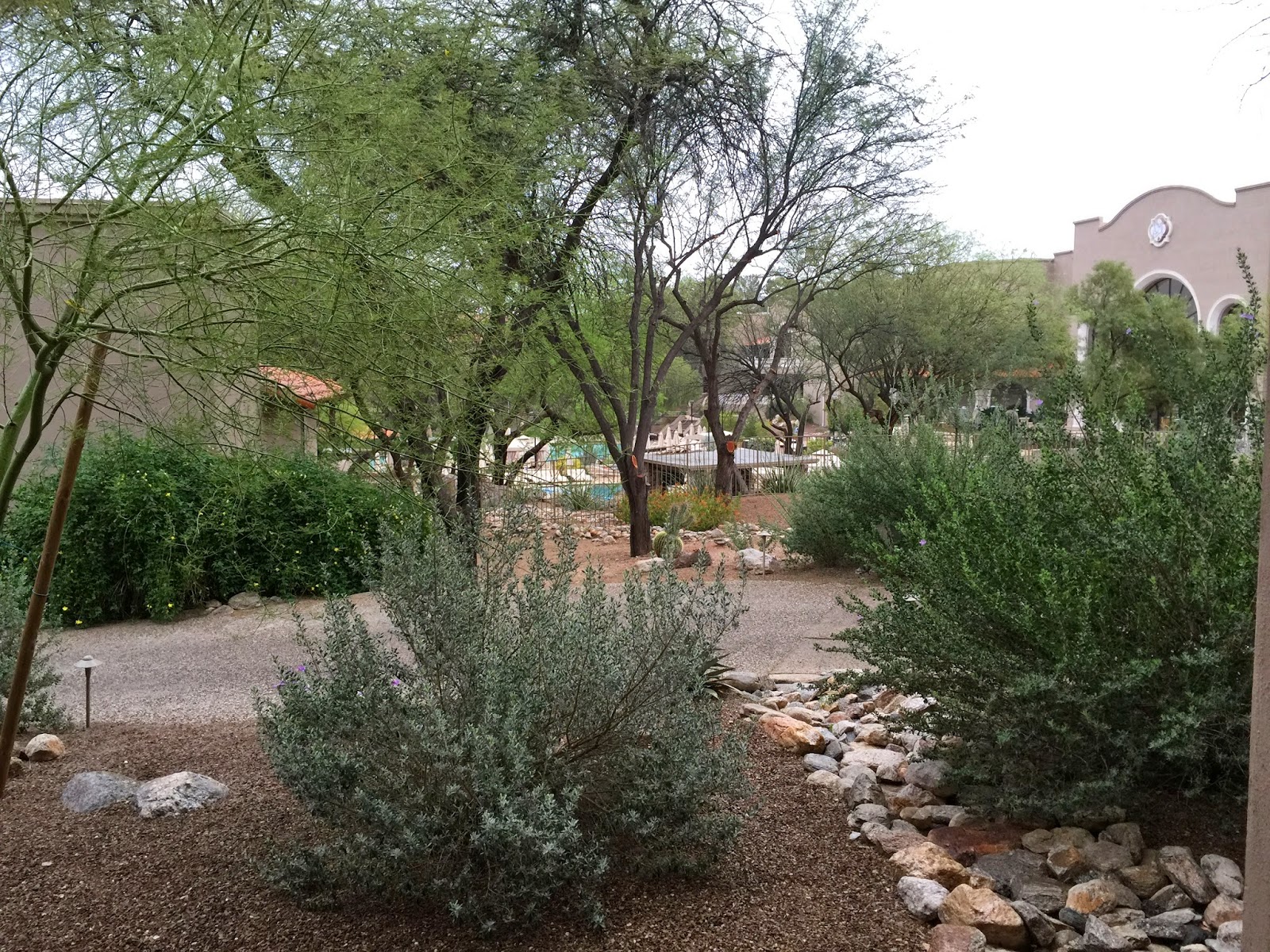 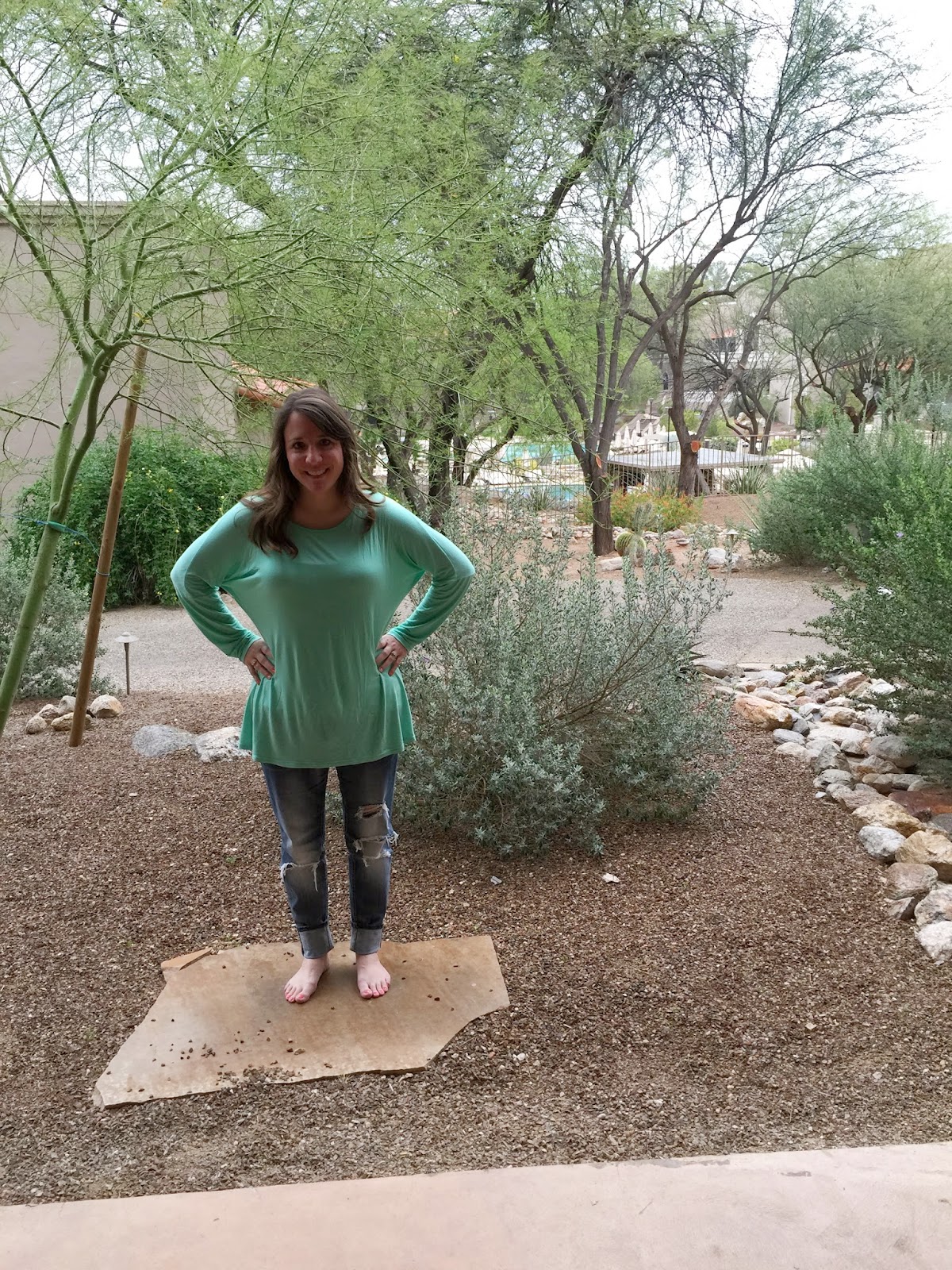 Another cactus!  I loved seeing them everywhere! 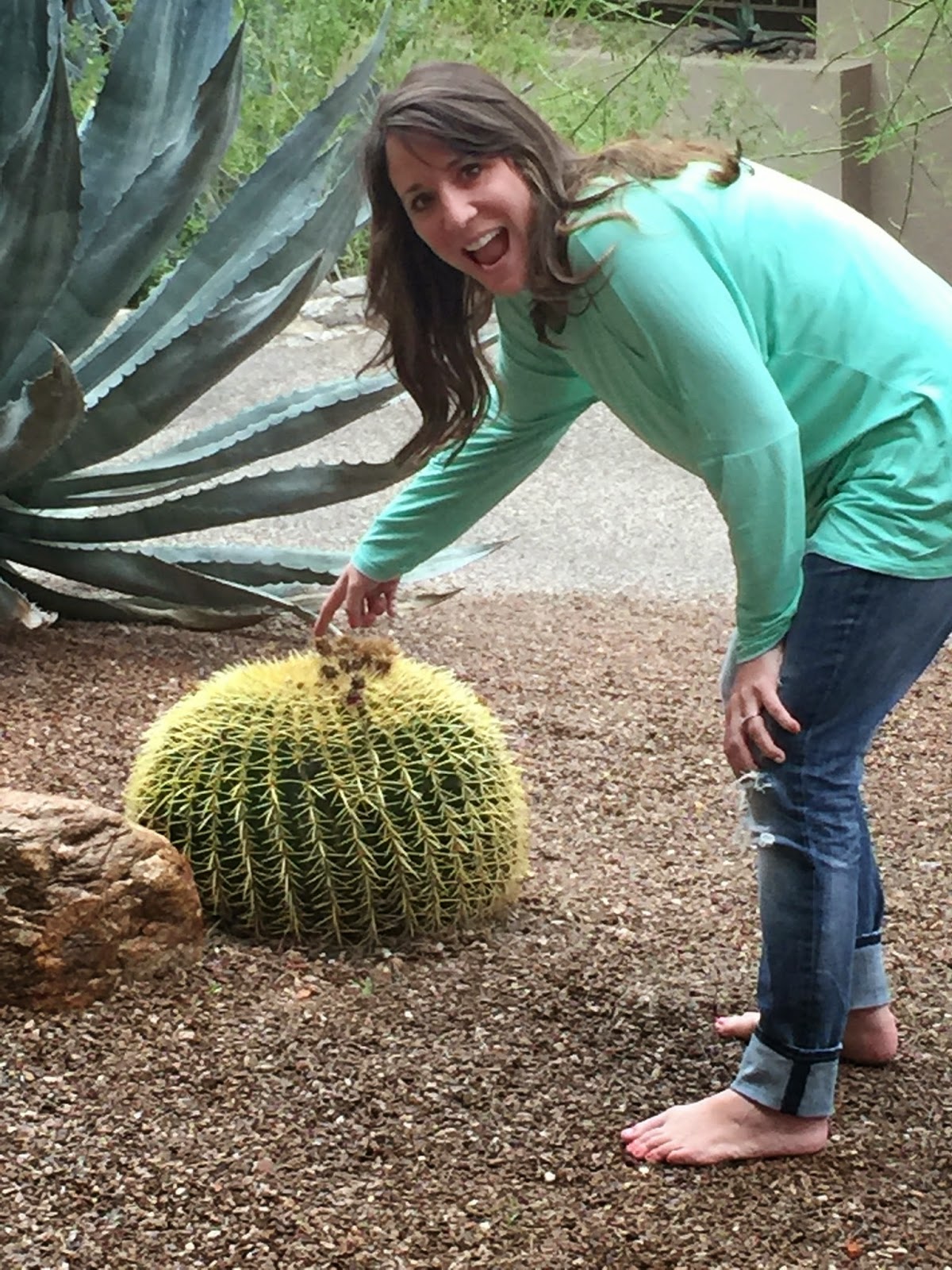 We each got a swag bag when we checked in. 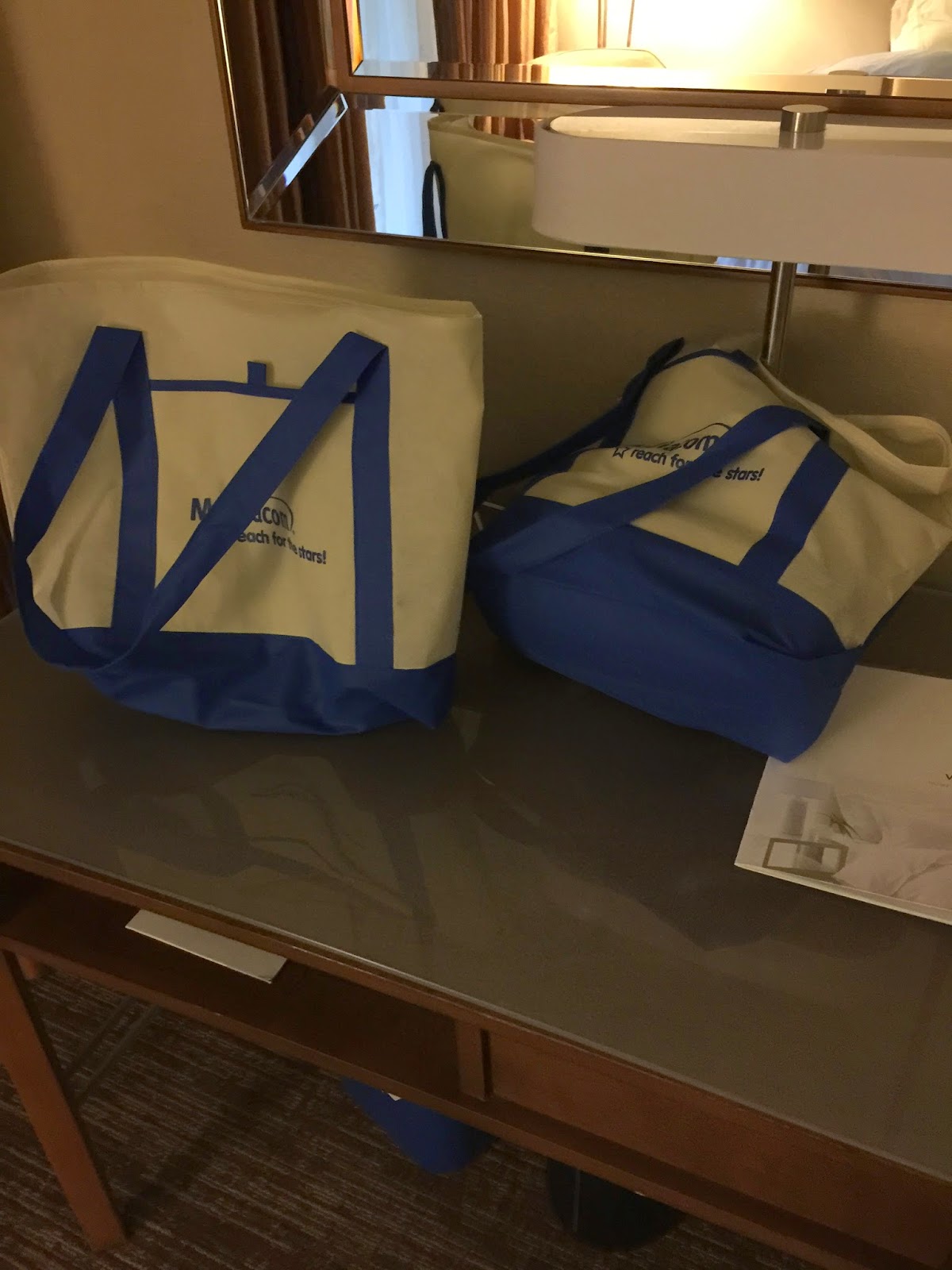 After our nap, we got up and got ready for our dinner.  It was a "welcome - meet-and-greet" type dinner with everyone on the trip. 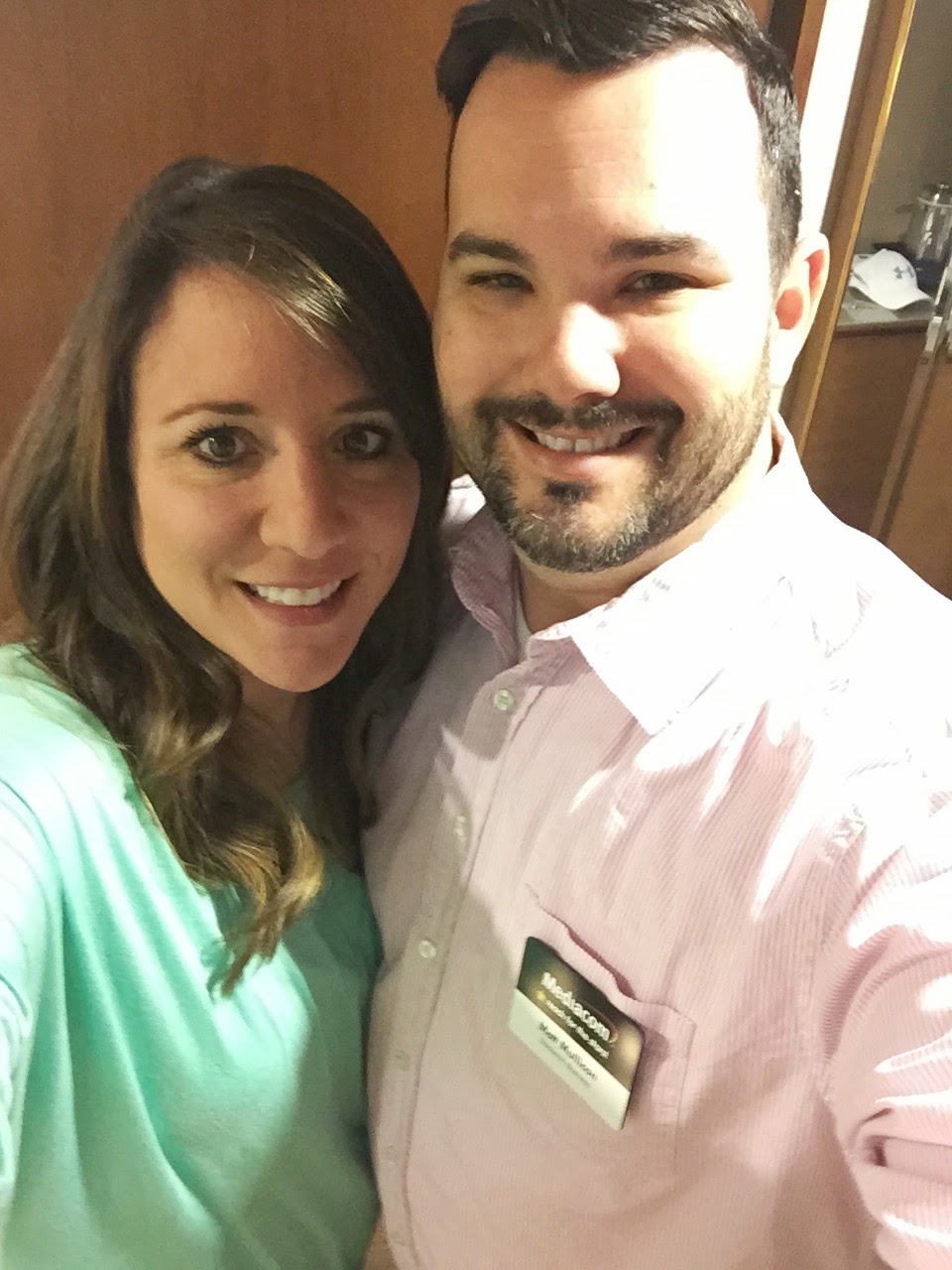 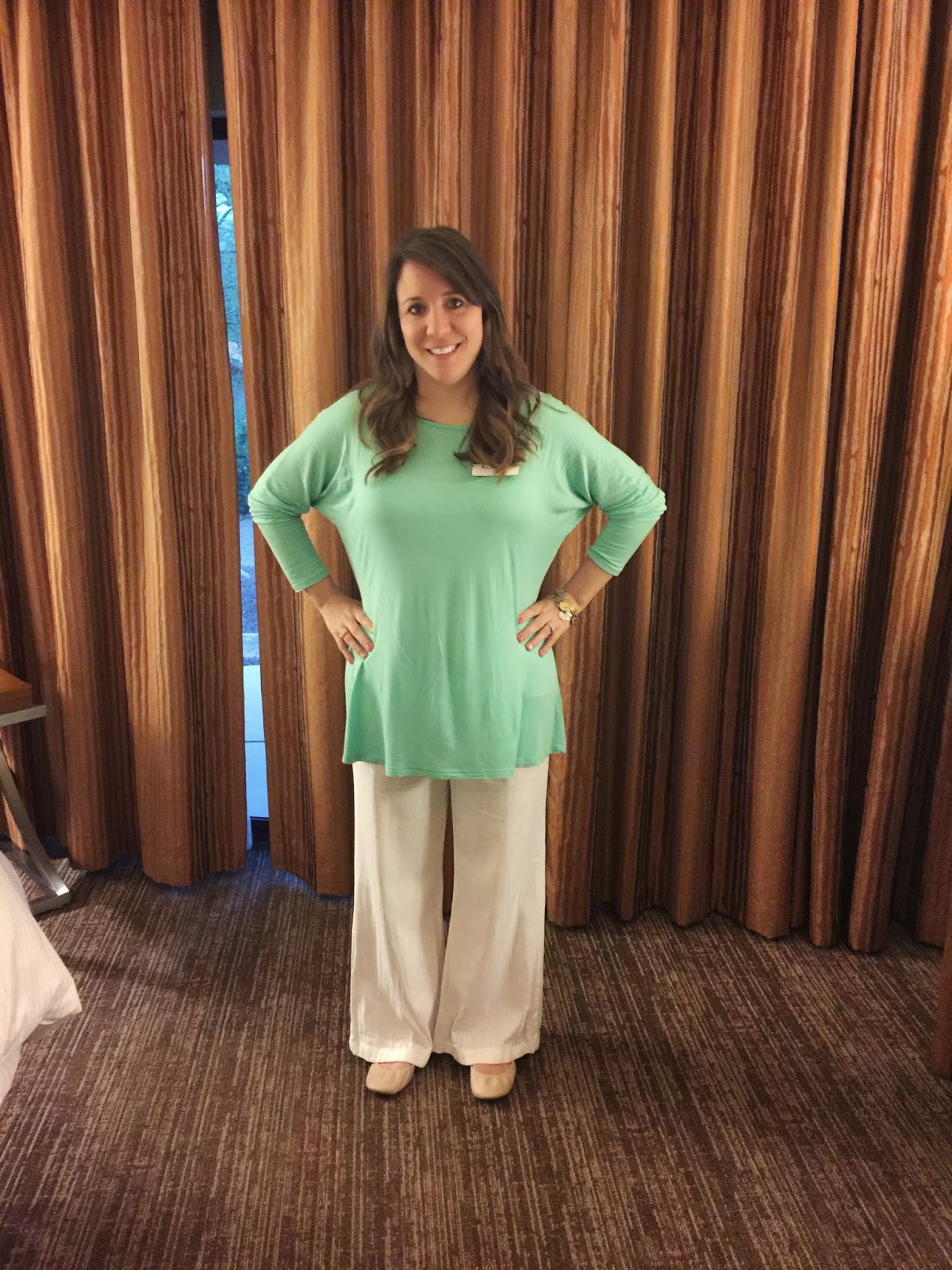 The dinner was kind of awkward (since we literally knew no one except for the VP's).  Out of the 32 people who had won the trip, only 3 were from the South.  Everyone else was from the Iowa/Minnesota area.  They had some amazing food, and we did end up finding some really nice people to eat with that first night (that we ended up hanging out with the rest of the trip).  We did call it a night pretty early (8:00 AZ time, 11:00 GA time) because we were so tired.  We knew we needed our rest so that we could enjoy our next day!