This is the last post about our girl's trip to New York, so if you missed day 1, day 2, or day 3, you might want to go back and read that first!

Day 4 was the last day of our trip.  We had about 1/2 a day to do things around the city before we had to head to the airport.  Pretty early on in the planning process we decided that this would be a good day to visit the 9/11 memorial.  Our trip was so fun and lighthearted, but ending on a serious note seemed like an appropriate thing to do.

It also turned out pretty appropriately that this day ended up being pretty rainy and gross - it definitely changed our mood!  On the way to the memorial, we stopped by Bryant Park for Emily to get a picture.  Her youngest son is named Bryant Spear, so she wanted to get a picture of his namesake! 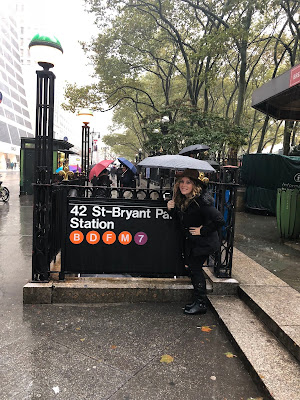 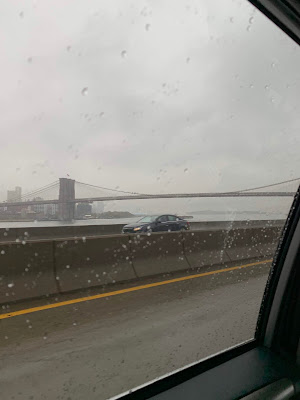 9/11 Museum
We bought tickets for 9:00.  We got there, went through security, and I pulled my phone out to turn it on silent and noticed the time.  It was pretty appropriate to be starting our tour at 9:11 am.

These are the "Survivor Stairs"
During the attacks of September 11, 2001, this stairway served as a vital route to safety for many people. The stairs were mostly intact immediately after 9/11, but they were significantly damaged during the nine-month recovery period. The stairway provides a powerful reference to the survivors’ story as well as a commemoration of the recovery period. It is also the sole vestige above ground of the World Trade Center, a major 20th-century architectural complex and engineering achievement.
The stair remnant originally weighed 175 tons and stood 22 feet tall.
(information taken from the 9/11 museum website) 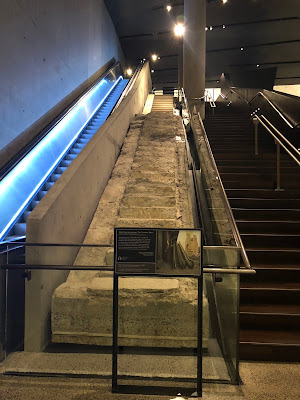 This is the only piece of artwork commissioned for the museum.  There are 2,983 blue paintings - one for every person who was killed in the 9/11 attacks as well as the 1993 Trade Center bombing.  Behind this wall are unidentified remains from victims of the attack (which is closed to the public).

The sky on 9/11 was known as "severe clear" and something that many survivors remember that day.

I stood at this space for a while and just took it all in.  This was a very large, very impactful part of the museum for me. 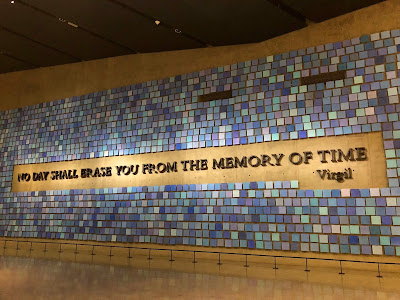 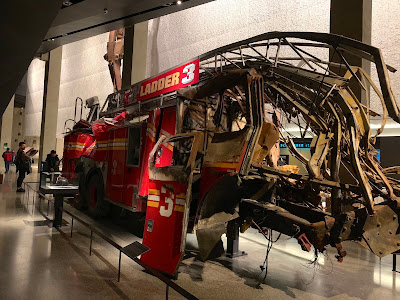 This huge steel beam bent over itself during the collapse. 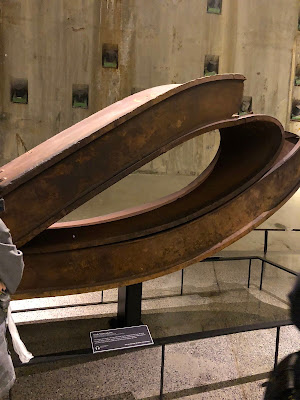 This entire wall was still in tact from the collapse. 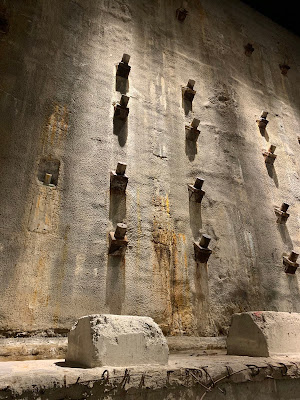 This steel beam was one of the last to be removed from Ground Zero.  It is spray painted and tagged by first responders, and also holds photo memorials and missing posters. 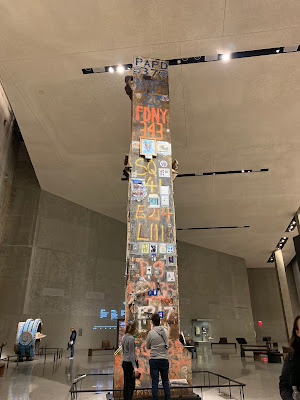 The majority of our time was spent in an internal section of the museum that holds 80% of the artifacts from that day.  We spent a total of 2 hours in the museum and still missed so much.  We could have spent another 2 hours in there easily.  After a while, I needed to step out of the internal rooms and take a break because it was all so overwhelming. 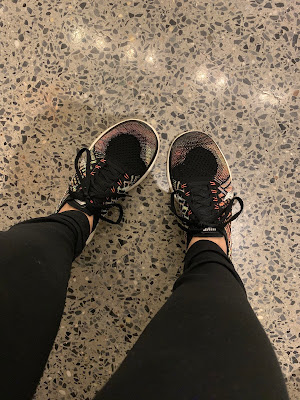 After we finished inside, we went outside to see the reflecting pools.  They are so much bigger than I anticipated.  They were beautiful, sad, and respectful all at the same time. 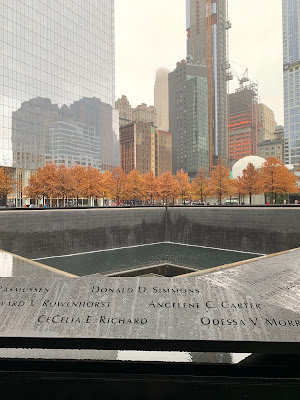 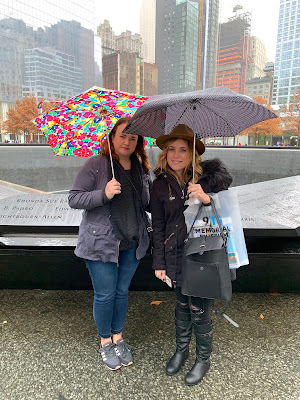 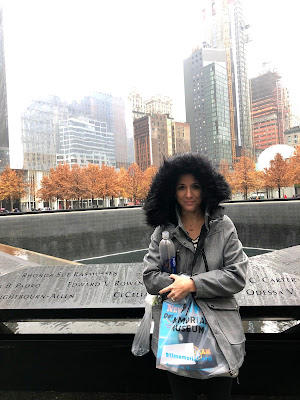 Around the pools are the names of all of the victims.  On their birthdays, staff members place white roses in their names. 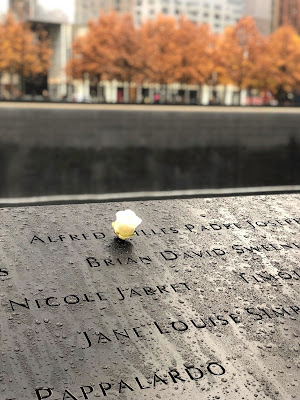 Also outside was the Survivor Tree which was amazing to see.  It was also so neat that almost all of the trees around it were yellow or orange and had their fall colors, but this tree stood proudly in the middle with all of its green leaves still. 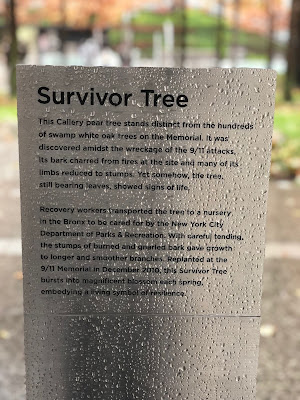 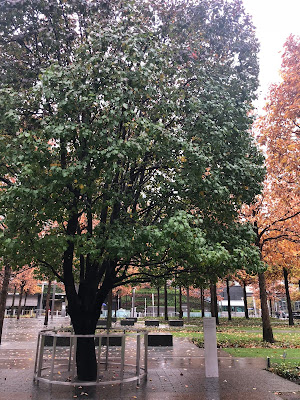 While the 9/11 Memorial was so hard to walk through, I am also so glad that we made time for it.  I feel like it's really an important place for all Americans to visit at some point of their lives.  I still remember September 11 so vividly, but to stand there and know that this was no longer something that happened in another part of the country - this happened where I am standing - was just a life changing experience for me.  I remember after the attacks feeling such a strong sense of patriotism (and sensing it across the country), but going to visit made that feeling come back strongly.  It's not an easy place to visit, but it is so so important.

Coming Home
After we finished at the museum, we went back to the hotel to finish packing and check out.  We took a good-bye picture in the elevator! 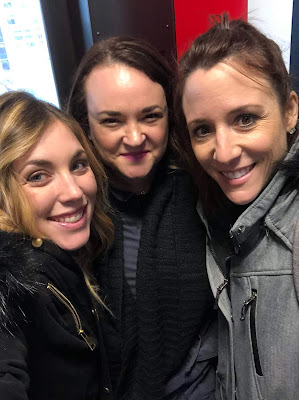 We also snapped some pictures outside our hotel. 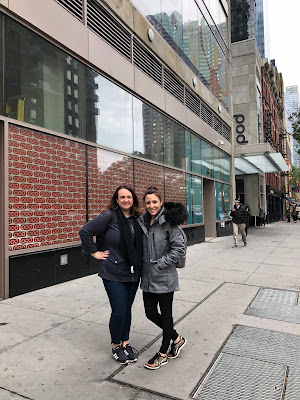 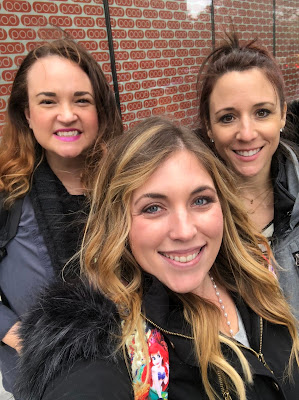 You've got to love all of the rotating doors everywhere! 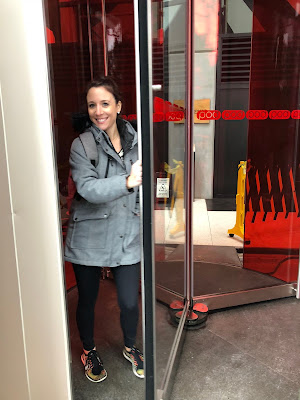 Our flight was scheduled to leave New Jersey at 5:30.  We got to the airport in plenty of time for our flight, but as we were waiting, we kept getting texts that our flight was delayed.  Originally, we were supposed to fly to Atlanta and have a 2 hour lay-over before our flight to Valdosta.  By the time we boarded the plane, our lay-over was down to 40 minutes.  This was especially stressful because, if we missed that flight to Valdosta, there were no more flights until the next day.  And no way were we renting a car and driving 4 hours home through the middle of the night.  And I was supposed to be back to work the next day.  Talk about stressful! 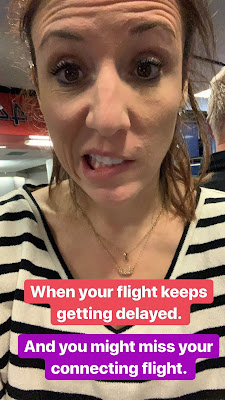 While we were stuck at the airport for forever (seriously like 5 hours), Emily and Katie went to find something to eat, and I hung back at the terminal.  Emily brought me back some green tea mochi (which she is obsessed with) to taste.  It was so funny because she was so pumped about it and so excited for me to try it. 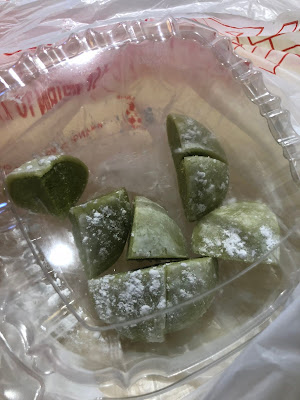 But ya'll.  It was so gross!  I just ate one little quarter of it, but I still had to spit it out!  YUCK!  I hated the taste and the texture of it! 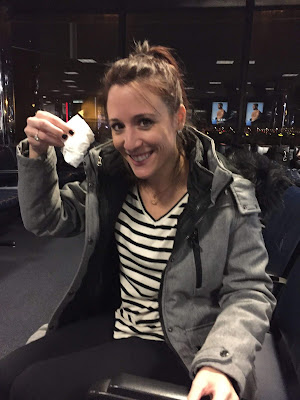 Emily and Katie thought it was hilarious.  Emily wasn't too bummed because it meant more for her! 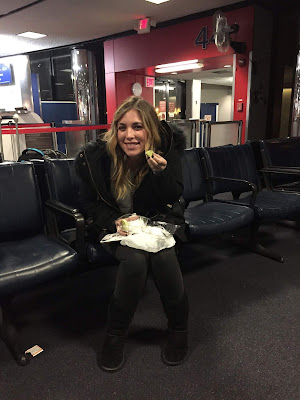 On top of the diminishing lay-over stress, we were also having a huge debate about our bags.  We all had one checked bag and one carry-on.  Both Emily and Katie had super heavy (and FULL) carry-ons, and they were really concerned with having to potentially run through the airport with their bags.  After much debate, they decided to check them at the gate of our flight to Atlanta.  Here's to hoping they made a good decision! 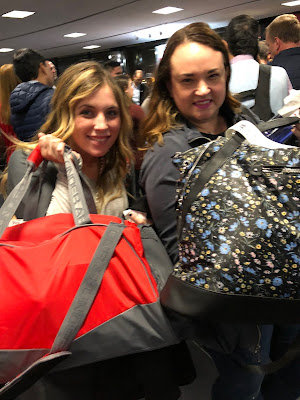 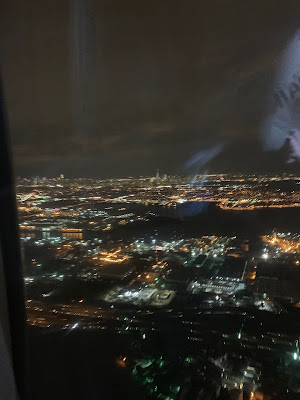 So our 2 hour lay-over went down to 40 minutes when we boarded the flight to Atlanta.  When we landed in Atlanta and were finally able to get off the plane?  We were down to 13 minutes!  I seriously got off the plane and just took off running and left the other girls behind!  Emily stopped to talk to the gate agent and ask them to call ahead to our next gate to let them know that we were running there.  After that, they took off running, too.

We had to run all the way from the far end of concourse A to the far end of concourse D.  It was far enough away that we had to take the train between concourses!  No joke, as I was running, a military man passed me running also (towards D).  I yelled, "if you're going to D40, tell them we're coming!!".  Amazingly, he was going to D40, and he was asking the gate agent to wait for us when I ran up!

We seriously boarded and they shut the doors behind us.  It was insane!  I was coughing so bad after that crazy sprint!  It was the craziest way to end the trip, but we made it!  More amazingly, all of our luggage (including their carry-ons!) made it, too! 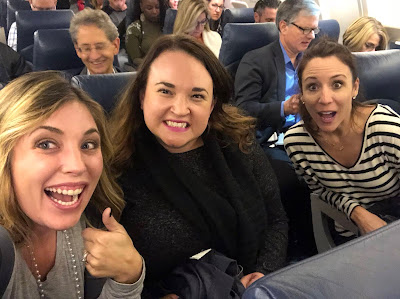 This was the most amazing and fun trip with my sweet, sweet friends.  Traveling with my family is always one of my favorite things to do, but making memories with my friends is so special and important, too!  The three of us really do just have a great relationship and get along so well.  With 4 straight days together, we didn't run into any issues or personality clashes, and we just had the best time.  I felt close to these girls before the trip, but leaving I feel like we're even more strongly tied to each other.  Thank you for an amazing time, girls!