On July 9, Cooper had his 6 year old well-check.  Here are his stats: 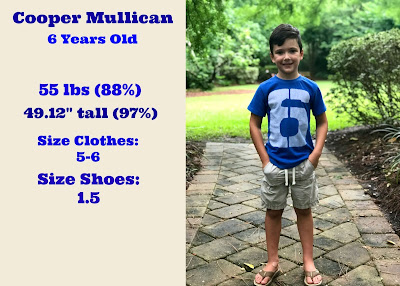 Just like last year, he actually dropped in percentages.  His height only dropped one percentage point, but his weight dropped 7!  He actually had lost a pound since we took him in on the day that he ran into the counter top.  She and I talked about it for a little bit, and she said that she was pretty sure that the lost pound is just due to how active he is and how active we've been this summer . We have been swimming 3-4 days a week for hours at a time.  That is a lot of activity!  We're also taking lots of walks, he got a new scooter, and he's an active boy!  Overall, she wasn't concerned about it at all. 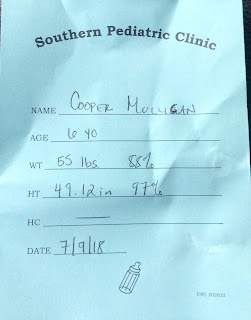 This was seriously the fastest appointment we've ever had there.  I was still trying to fill out paperwork when she was coming in to see him!  She honestly didn't ask us very many questions.  Here are some of the things we talked about:
-how he eats
-how active he is
-screen time
-booster seat

She didn't actually talk to Cooper much at all (which is unusual).  He did great on his eye exam, but his left ear didn't do as good as his right ear on the hearing test.  She looked in there and said that there was fluid behind his ear drum, and she asked if he had allergies (he does).  She said it was likely due to that and to give him his allergy medicine and it should clear it up.  She watched him walk (looking at his spine) and checked his belly, eyes, and ears.

It was super fast and that was pretty much the whole appointment!  Looking back at LL's 6 year old visit, they talked to her and asked her a ton of questions, so it's funny that they didn't do that with him!  Other than flu shot, hopefully we won't be back until he turns 7!

After his appointment, Cooper and I went on a Mommy/Cooper date to get a donut.  I guess when you lose a pound, you can eat a donut and not worry about it - haha. 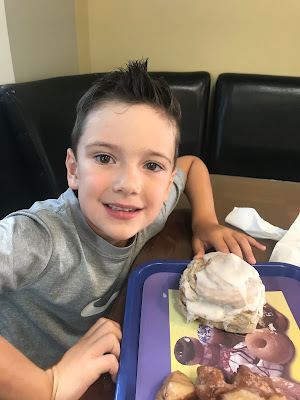 I am so so thankful for this healthy boy! 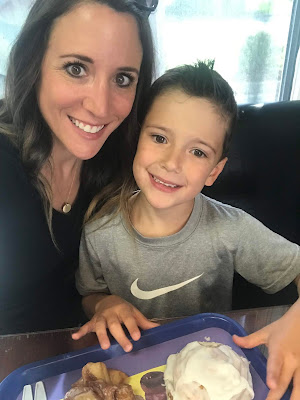