Our last day on the boat was a day at sea.  It was nice to have a more relaxing day scheduled after two busy days (one at the Atlantis water park and one day at the beach of Carnival's private island).

We hit up the water slide pretty soon after it opened in the hopes of getting there before it got crowded.  It worked!  It wasn't super hot yet, and there weren't that many people.  The kids got to go down as many times as they wanted!

Cooper was the biggest fan of the slide by far! 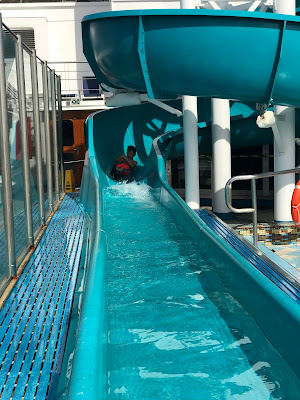 I even took a turn down the slide! 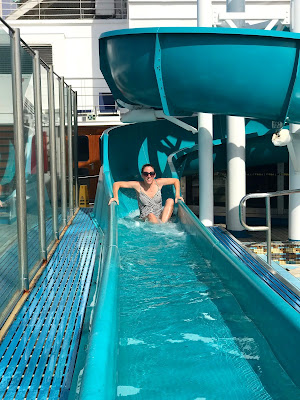 LL went down the slide some and swam in the pools some, but she also hung out with me some! 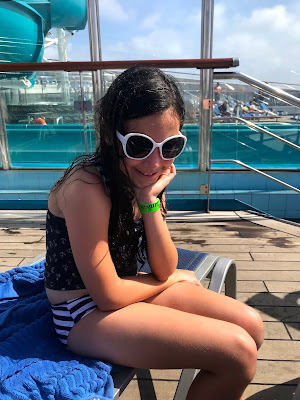 I missed a picture of the animal the day before (and I actually don't remember what it was), but we got an elephant on the last day! 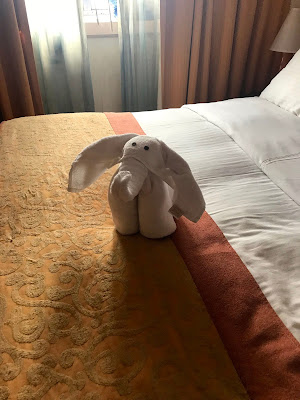 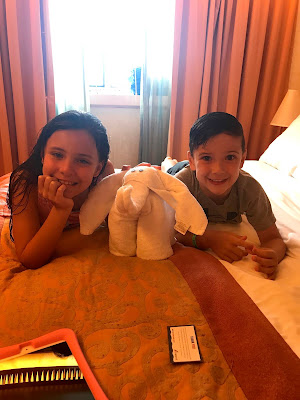 We dropped the kids off at Camp Carnival (the first and only time they went the entire trip) and Matt and I had some alone time!  What did we spend it doing?  Eating from the chocolate buffet!  On the last day, they had one entire buffet dedicated to all things chocolate - and it did not disappoint! 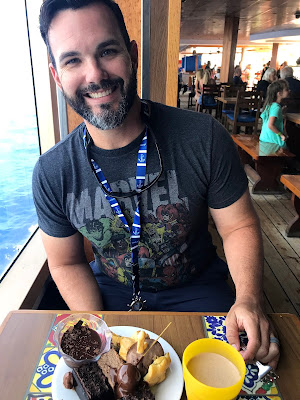 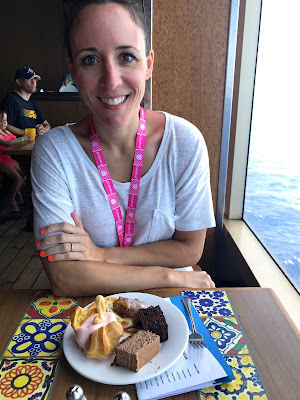 We picked the kids up from Camp Carnival in time for lunch and for them to go through the chocolate buffet.  After they ate, we went out on the deck to watch an ice carving.  They were fascinated! 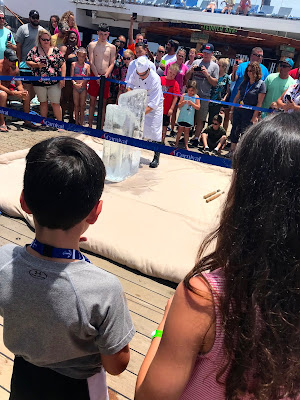 The final product (a fish). 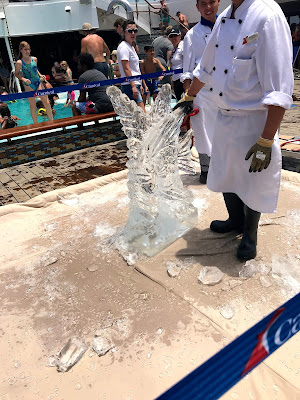 We got ready for dinner and then went to Laura and Gino's room to let the kids hang out together and play somewhere cool (it was so crazy hot outside on the deck). 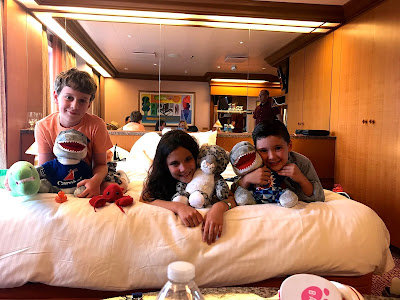 That night at dinner, I tried baked Alaska for the first time.  I liked it! 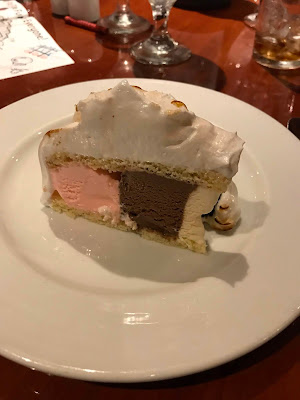 After dinner we went outside to get some pictures on the deck. 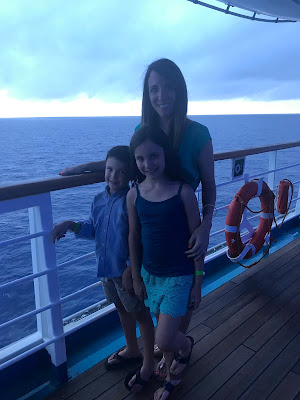 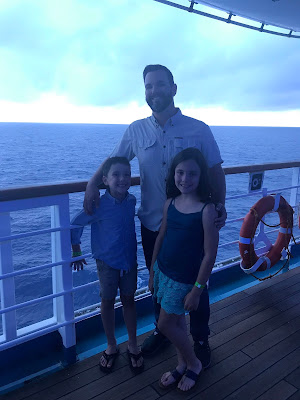 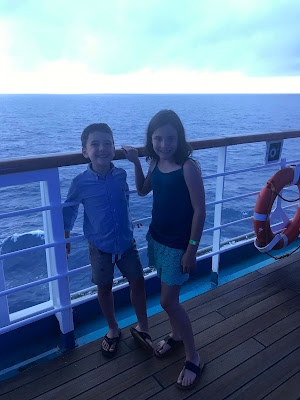 These three kids had a blast! 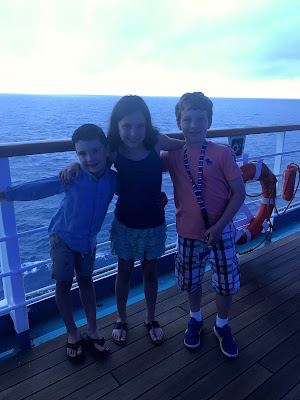 That night we went to the Rock and Roll America concert.  We met up with Amanda and Lorelai and sat with them for the show! 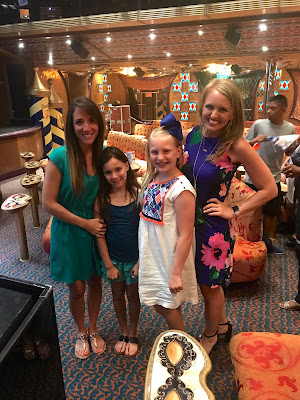 They passed out headbands and gave tattoos to those who wanted them! 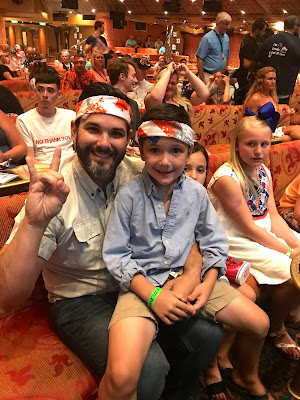 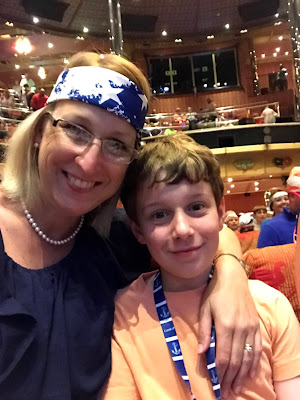 Cooper and Matt were the only ones to get tattoos. 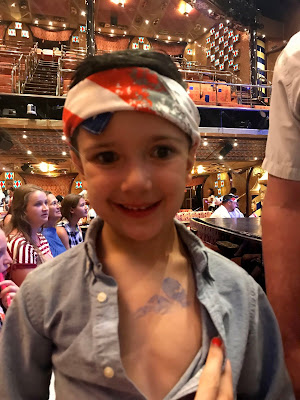 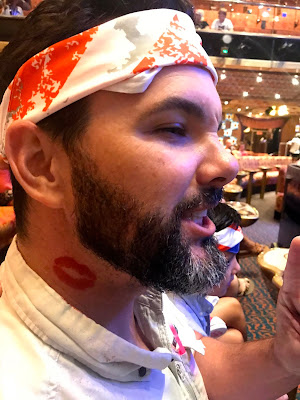 The next morning, we got all packed up and started the disembarking process!  We chose to just carry all of our own luggage off the ship so that we could get off earlier. 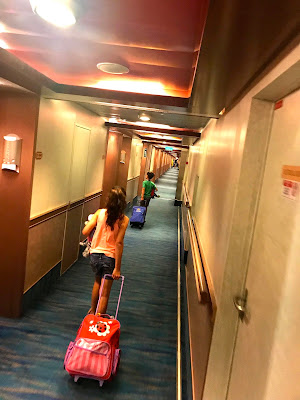 Cooper started chatting up a police officer at customs, and he ended up giving Cooper some of his gloves.  It was hilarious how much Cooper loved these and was excited about them. 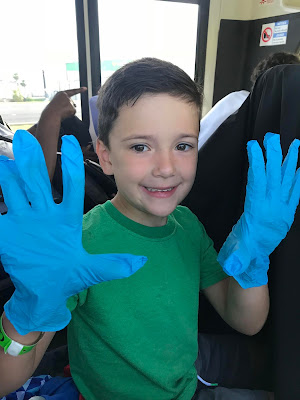 That's a wrap on our cruise vacation!  I am so happy that we decided to do this for our vacation this summer.  The kids were at perfect ages (9 and almost 6).  No one is potty training, no one is napping, and they're still young enough to be so so excited about everything.  It was a great week with my family, and everyone had such a good time!