Ever since the summer before I had LL, my sister and I have *tried* to take a girl's trip together at some point in the year.  We don't always get to (and sometimes have several years inbetween trips), but it's a goal we try to keep in mind.  The summer before LL was born, we went on a trip to Destin (I wasn't blogging then).  Then in the summer of 2011, we took a trip to Savannah together.  In April of 2012, we took a trip to California (when I was 26 weeks pregnant with Cooper).  In July of 2016, we took a quick trip to the beach in Jacksonville.

I feel like we've been talking about doing another girl's trip since right after the beach trip in 2016, but it took us forever to decide what we wanted to do and when.  Finally, when we were up in Atlanta right before Christmas, Gino got us to sit down and finally nail down what we wanted to do.  And this is what we picked... 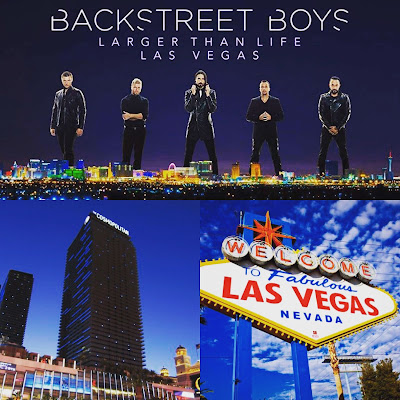 Laura had been before, but I hadn't.  I knew Backstreet was about to end their residency, so we thought it would be fun to see them there.  We decided to go over my "Winter Break" in February - which is more of the off season for them which made it cheaper.  I was so pumped about it!

My Winter Break was a whole week, but I ended up driving up to Atlanta the Friday before as soon as school got out.  Backstreet's "last" show (they ended up extending, so it wasn't technically the last show like it was when we booked in December) was that Saturday, so we needed to get there asap.  I drove up after school on Friday, and we were up early and ready to go for our flight Saturday morning!

We made it to the airport!  Let's do this! 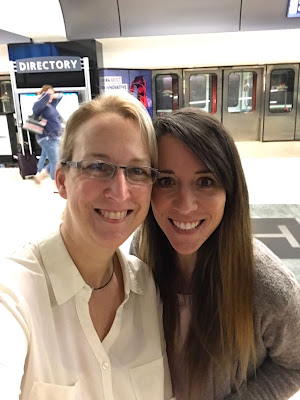 We got to the gate with plenty of time to spare, and our plane had already arrived.  I am a suuuuper nervous flyer, so I was hoping this meant they had a ton of time to check the plane and make sure it was safe - haha. 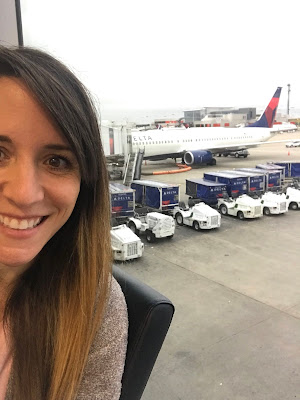 Here I am - trying to focus on anything other than throwing up - haha.  I'm telling you, I am a wreck when I'm traveling.  Laura flies pretty often, so she took one for the team and sat in the middle seat.  She let me have the window, which ended up being hilarious because of course my "window seat" was the only seat on the plane that just had a wall.  It wasn't even like my seat was in-between windows, there just wasn't one at all.  It was pretty claustrophobic!  About 2 minutes after I took this picture, Laura was out.  She was asleep even before take-off - haha. 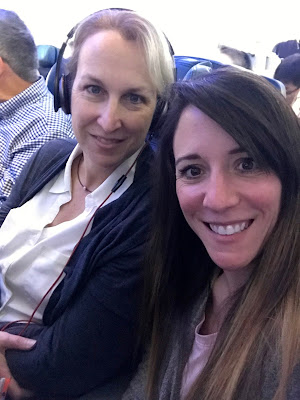 Ya'll.  The turbulence the last 30 minutes of the flight was no joke.  But we made it to the Vegas airport without either of us puking or passing out!  (You know it's bad when the person who flies a lot is struggling with all the turbulence.) . It was pretty hilarious how we stepped off the plan and there were slot machines ready and waiting in the airport! 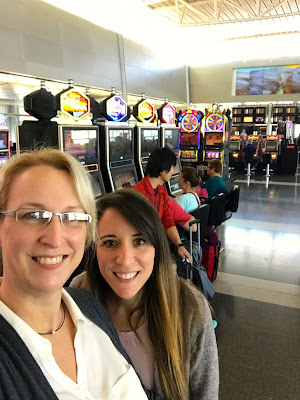 I was so so happy to be back on the ground, and I was ready to get this vacation started! 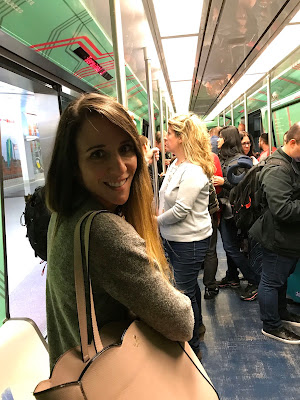 We stayed in The Cosmopolitan, which is right on the strip and right next to the Bellagio.  What was so awesome was that when we got to our room, we had the perfect view of the Bellagio fountains! 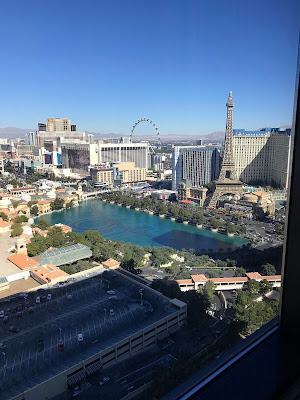 By the time we got checked into our room, it was like 3 pm Georgia time (lunch time Vegas time) - and we left Atlanta at breakfast.  I can't eat before I fly, so I was starving.  Since we were both so hungry, we decided to just eat in the hotel in the hopes of getting food faster.  Our hotel had quite a few places to eat, and we decided on Holstein's.  Burgers and milkshakes?  Absolutely.  There was a wait for a table, so we took some pictures in front of the chandelier bar while we waited. 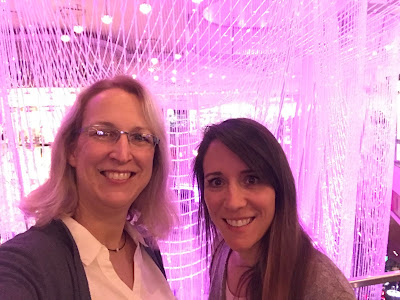 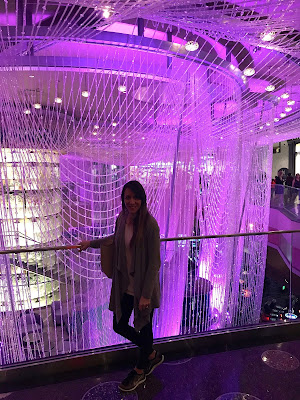 Finally at a table and ready for some food! (You can see the purple chandelier bar out of the windows of the restaurant) 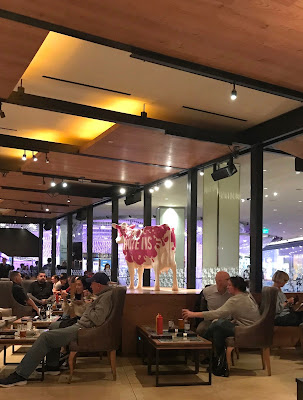 We knew our food would take a little bit, so we got some milkshakes while we waited.  I am not kidding when I tell you that I'm still dreaming about this milkshake a month later.  It was so good! 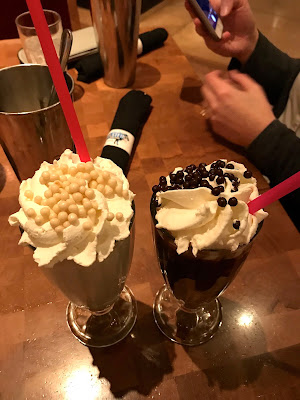 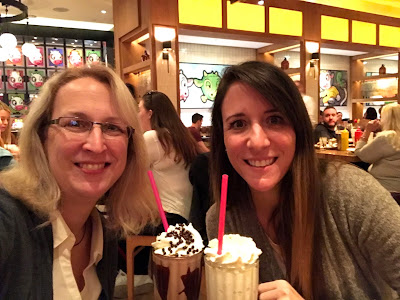 We split the "Nom Nom Burger" which had cheddar cheese, potato chips, and 1,000 island dressing on it.  It was so good!  We also split sweet potato fries which we both love. 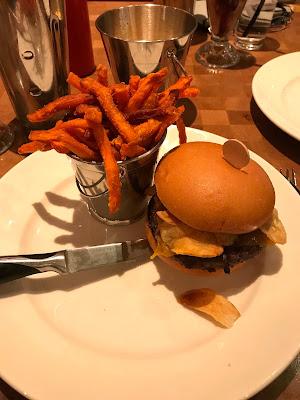 The hotel definitely had this "old Vegas" feel to it.  They had these old cigarette machines all around, but instead of cigarettes, they all have little custom pieces of art the size of a cigarette case.  Laura got one, and I would post a picture, but it was pretty inappropriate - haha. 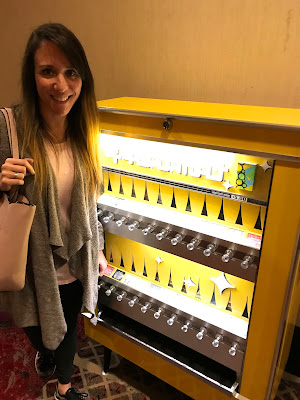 As lame as this sounds, after lunch, we went back up to the room to get some sleep.  By this time, it was almost 5pm Georgia time and we had the Backstreet concert that night.  It didn't even start until 12pm Georgia time, so we knew we needed some rest if we were going to make that happen!  We shut the blinds, set our alarms, and got an amazing power nap in!  We woke up a few hours later, got dressed, and headed out of the hotel to walk around some, get dinner, and go to the concert! 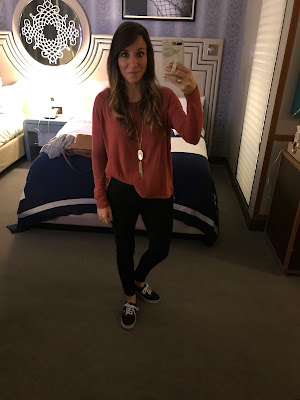 The view from our room at night was stunning! 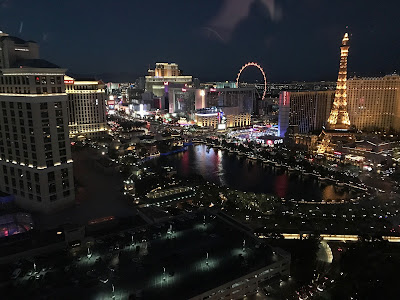 First thing on the list?  We had to walk over and see the Bellagio fountains up close! 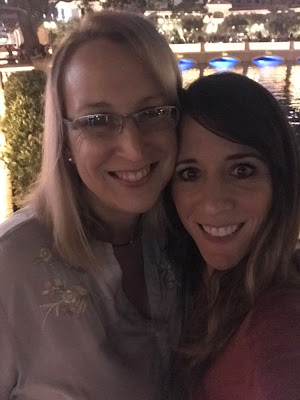 The fountains were right across the street from Paris. 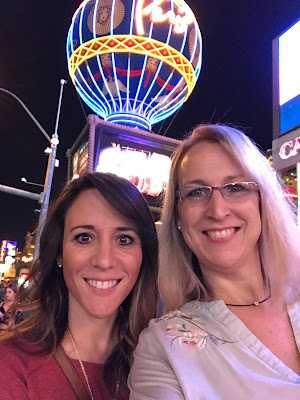 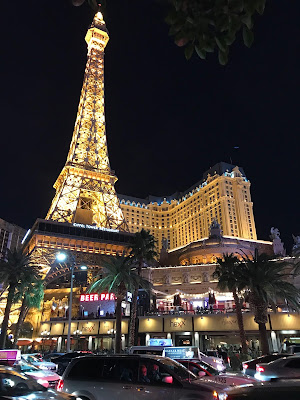 The concert was in Planet Hollywood, and the Planet Hollywood mall was literally right across the street from our hotel.  We grabbed some dinner (just at a sandwich shop) and then spent quite a few hours walking around the mall.  One of the things that I really loved about Vegas was how so many of the shopping centers were made to look like they are outdoors (even though they are 100% inside).  No matter which one we were in, it was always so beautiful! 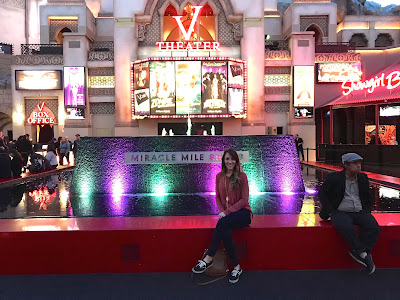 The concert started at 9pm, so we got to our seats around 8.  I was not expecting how much smaller the concert venue's in Vegas were - I'm so used to the huge arenas in Atlanta.  We thought we were up in "upper level" seats, but we were actually so super close to the stage! 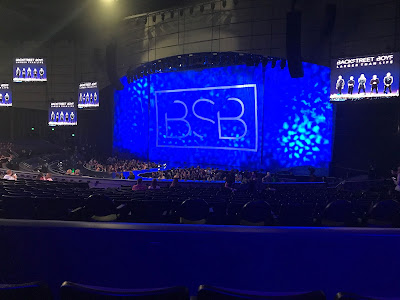 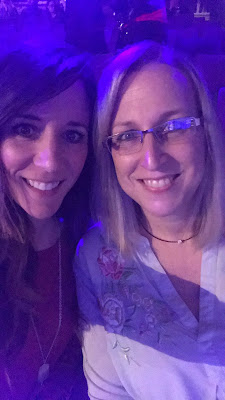 Show time!!  I kid you not, the show was amazing.  I mean, if you don't like Backstreet (or never did), you wouldn't enjoy it.  Laura and I LOVED it! 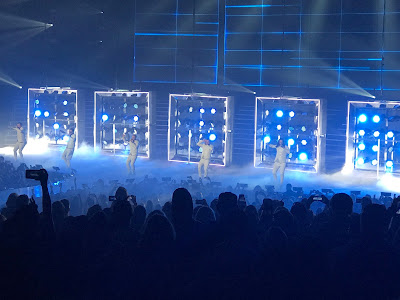 At one point they come out into the audience for a song, and they were all super close to us!  It was awesome!  I don't care who you are or what age you are - if you were in our section, you were fan- girling. 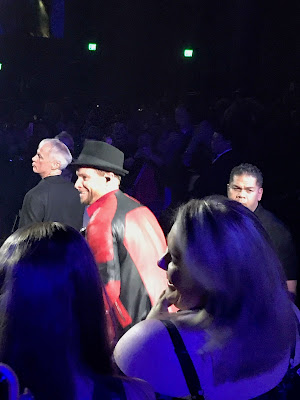 It was an awesome performance and an awesome way to kick off our Vegas trip! 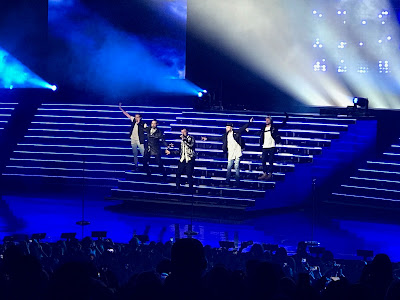 I put together a video of our entire first day in Las Vegas!

After the concert, we were done for the night!  We headed back to our room to get some sleep for our first full day in Vegas the next day!