Whew!  2018 is already here!  When I go back and create these recaps, it's such mixed emotions - some parts of the year feel like they flew by, and some parts of the year feel like they crept on forever.  At the end of every year, Matt and I talk together about the year, how it went, how we feel about it, what we hope for the next year, etc.  We both agreed that 2017 felt pretty flat line for us.  We had moments that were really good, and moments that were pretty bad/scary, but overall, it was a pretty even year.  Not great (overall).  Not terrible (overall).  I have this really weird thing with numbers (it's hard enough for me to explain in person, let alone by typing it all out), but I'll say that 18 is one of my favorite numbers.  It is just one of the ideal "good numbers" for me.  Fun fact - we got married on May 22 (22 is also a really really good number to me).  I wanted to get married on May 18 (my first choice), but it was a Tuesday in 2004 - so that's how the 22nd of May was chosen.  The other weekend was the 15th (a good number, but not great), or the 29th (also a good number, but not great).  I know you think I'm in idiot now - it's okay.  Haha.  I'm at peace with how weird I am.  Allllll of that to say - I think 2018 is going to be amazing.  It's a good number, we've already got lots of fun things planned - I'm just claiming that 2018 has some BIG things in store for us!

January was a good month.  We spent a lot of time with friends and family and had some fun things thrown in there, too.  On a Saturday with no plans, I took the kids down the road to snap some pictures of them.  They grow so fast and it's fun to pull out my big camera some days!  We spent MLK day at the park and then had lunch with friends.  We had some pretty scary weather come through (a common theme for 2017) and missed a few days of school due to some big tornadoes devastating the town where I work.  Matt and I snuck in a two-on-one date with Cooper one night, and Matt and I had a solo night out for his company's (belated) Christmas party! 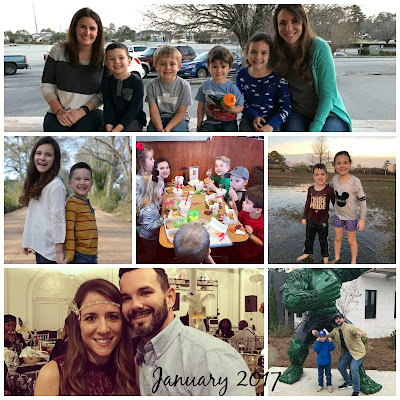 February
February is always a big month for us, and this year was no different.  What better way to kick it off than with our big girl turning EIGHT!  LL had a swim birthday party at Tiny Bubbles this year.  Another thing that makes February so special is the local Father/Daughter Dance near Valentine's Day.  Matt and LL go every year and they love the tradition!  LL saved up her money for months and finally had enough for an American Girl Doll.  Over Winter Break, she and I took a girl's trip to Atlanta to go shopping at the AG store!  We also had to rush Aspyn to the vet one day when she somehow managed to slice open her paw enough to need stitches! 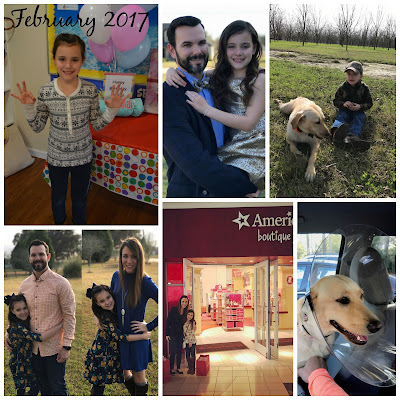 March
At the beginning of March, Mamaw Lucy came for a visit all the way from Louisiana.  It's so special for the kids to get to spend time with their great-grandmother!  Cooper had his Bunny Hop at school that both kids had a blast at!  We had a blast over Spring Break and did some of our favorite things - like going to the strawberry patch!  I also snuck in a movie night with some of my favorite girls! 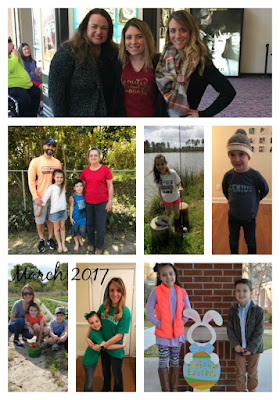 April
We kicked off April with Matt's 37th Birthday.  We also had our last "brick pic" at our old church building before moving to our new building!  Easter came with lots of fun things - class parties, an Easter festival at church, and actual Easter day with family! We were also able to fit in lots of outside time, and Cooper started his second year of t-ball! 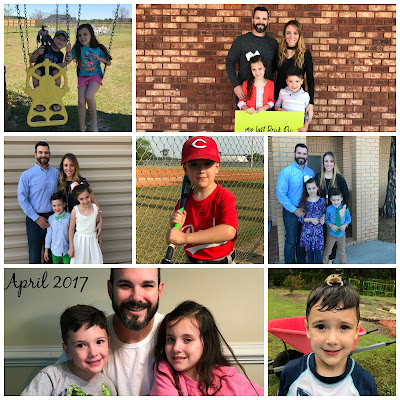 May
May was a very great month for us!  We got our yearly family pictures back from Captured By Colson.  The fam did a great job of celebrating my 33rd birthday, and I ended up getting a new car the very next day!  LL finished 2nd grade, and Cooper finished pre-k 3.  As soon as I got done with post-planning, we kicked off summer in a big way and hit the road for Destin, FL for a beach trip! 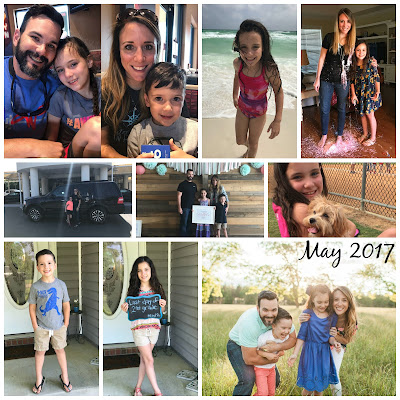 June
The summer months are just so busy and so fun for us.  In June, we went on a vacation to Calloway Gardens with the kids and Grammy and Pop.  We spent some fun time with friends, and we also got a pool set up in our backyard!  At the end of the month, Cooper turned 5 and we celebrated with an Avenger's Pool Party! 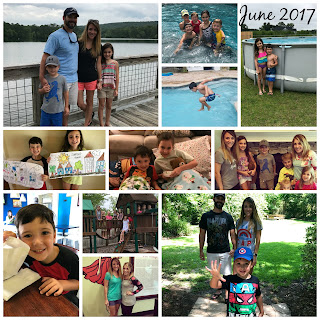 July
July was our last chance to soak up summer and do "all the fun" before school started back again.  We braved the heat (and went early in the morning) to go and pick blueberries ourselves.  We celebrated the 4th of July with Aunt Laura and Ben in town!  It was the first year that I've ever had both kids in VBS (and they both loved it!).  We dressed as a family of cows for free Chick-Fil-A!  We had our annual trip to the fire station with all of our friends.  Matt and I snuck in a super-fancy date night.  And last, but certainly not least, we hit the road for another beach trip to Panama City with Aunt Laura, Uncle Gino, and Ben to finish out summer break! 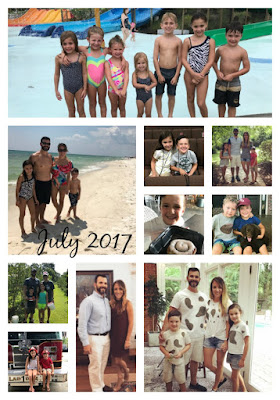 August
August started with a super exciting thing happening - Matt got his braces off!!  We also spent some Saturday mornings doing some fun crafts at the Home Depot kids workshops.  We officially said goodbye to summer and LL started 3rd grade, and Cooper started pre-k 4.  We got out early from school one day for the solar eclipse, I had a fun 80's themed girls night out, and I tried aerial yoga for the first time (and loved it!) 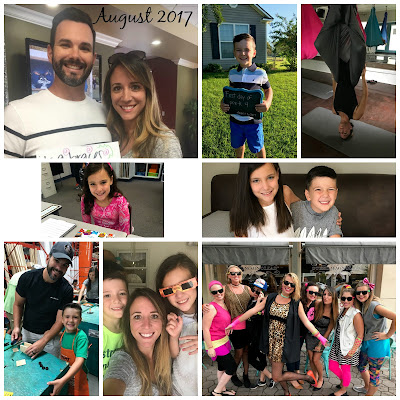 September
After the crazy weeks of summer and a very busy August, September was very relaxed for us.  Life did get a little crazy when we had a very intense hurricane come right through our area.  Cooper started earning his stickers and got his first "fun night" for meeting his first goal.  We officially decided that we wanted to put our house on the market next Spring, so the first few steps were starting to paint the inside of our house, and to say goodbye to our chickens.  LL and I also had a lot of fun dress-up days at school for Homecoming Week. 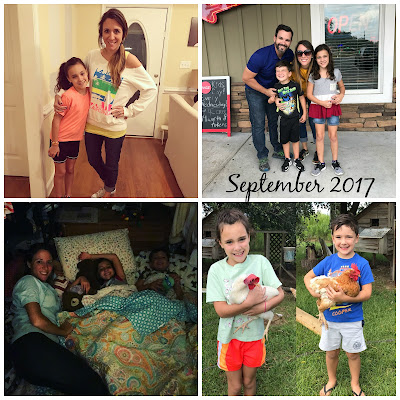 October
October means Fall, and Fall always means a lot of fun activities!  My school and Cooper's school didn't have the exact same Fall Break, so I was able to go to his class's pumpkin patch visit (a first!).  We went back to the pumpkin patch about a week later for our annual family trip to pick out pumpkins for our house!  The Air Force Base near our house hosted an air show, so we went to that with the kids.  Aunt Laura and Uncle Gino were in town to take Ben, too, so we snuck in a double-date night with them while they were here!  It was Cooper's snack week at school which means that the class pet, Flip Flop, got to come and stay with us for the week!  We ended the month with Halloween and trick-or-treating with our friends! 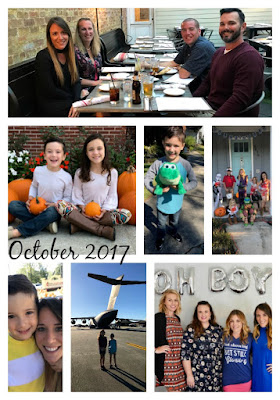 November
November was another month that was more laid-back for us.  Cooper had his annual "Thanksgiving Feast" at school where he was an Indian this year! We spent almost all of Thanksgiving break over at Gigi and Poppy's house since Aunt Laura, Uncle Gino, and Ben were in town.  I feel like I officially don't have a baby anymore because this is the month that Cooper lost his first tooth!!  We ended November with a trip to the Christmas Tree farm to pick out the perfect tree! 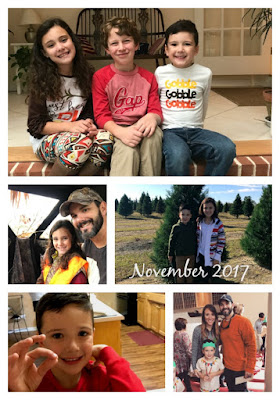 December
December was busy and full of fun!!  We fit in as many fun Christmas activities all month along as we could.  We had a fun night with friends, LL got an award at school, and Cooper lost another tooth!  We took a trip to Atlanta as soon as school got out to have some Christmas fun with Aunt Laura, Uncle Gino, and Ben!  And lastly, we had an amazing time as a family celebrating Christmas! 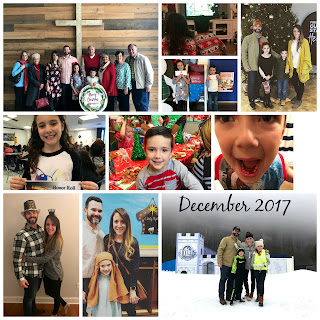