This past weekend was a random long weekend for me and LL.  We had Monday off due to the hog show in the town where I teach (that's not a joke).  We had big plans for our long weekend (that didn't exactly go as we thought).  Here's what we were up to:

Friday
Friday was St. Patrick's Day - so of course we had to get decked out in green!  When I asked Matt to get a picture of me and LL before leaving for school, Cooper insisted on being in it, too.  And how do you turn this cute boy down??  You don't. 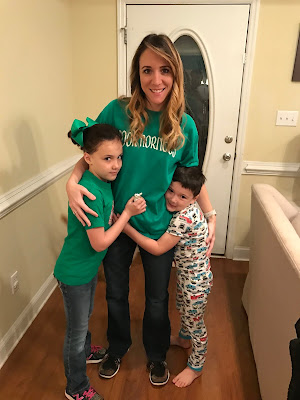 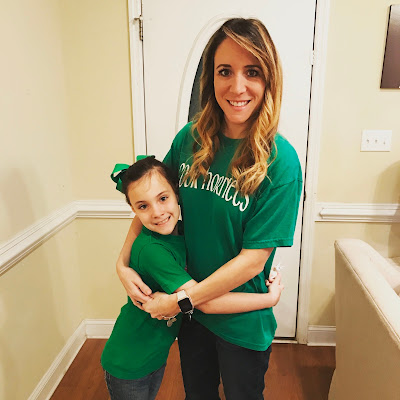 Cooper wore green to school, but then came home with this hat and necklace.  He was so proud of it and looked so cute! 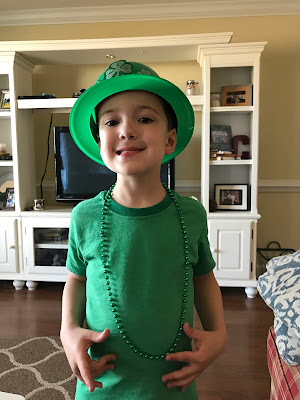 Matt moved our dining room table on Friday evening so that we could sweep, and when he did, several tiles literally just popped up off of the floor.  It was so weird!  We took all the loose ones out so that they wouldn't get broken and Matt could just reset them later. 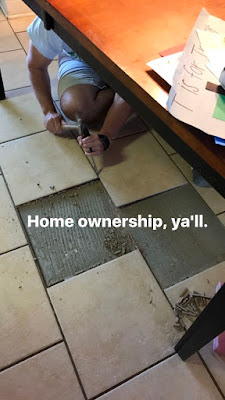 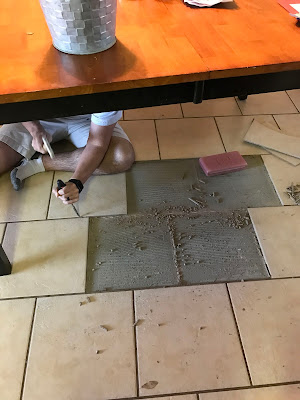 Our kitchen looked like this for a few days. 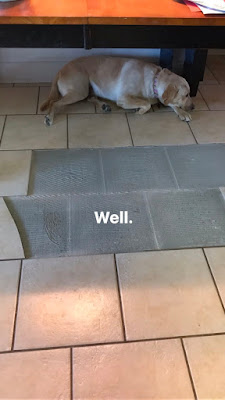 Cooper isn't a huge animal person, but he's starting to be more and more as he gets older.  Kayla and Andrew came over with their puppy, and Cooper was all about holding Koko.  It was sweet and out of character for him! 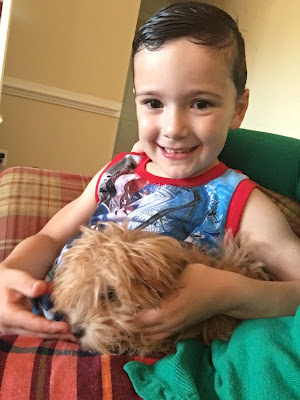 Saturday
We got up and going pretty early in the morning so that we could head to the Bunny Hop at Cooper's school! 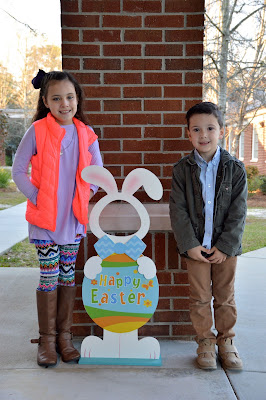 When Cooper woke up on Saturday, he had a cough and was hoarse.  LL has been battling allergies for a few weeks, so we figured he was following suit.  During the Bunny Hop, his cough got worse and it sounded just like croup.  After we left the Bunny Hop, we stopped by the walk-in clinic to have him checked out.  He got croup several times when he was younger (and it has a very distinctive sound), and I was just sure that was what he had. 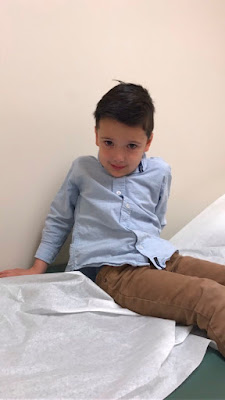 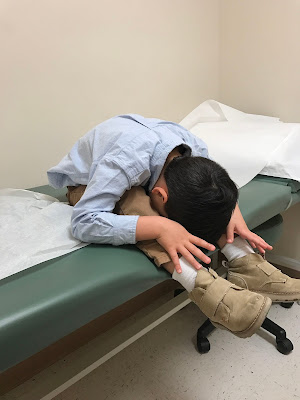 Turns out - I was wrong.  Not croup - strep throat.  If you're counting, this is the first time for 2017, but the 3rd time since starting school in August.  Yay.

That evening, we already had plans to meet with family at The Mill for pizza and games to celebrate LL's amazing report card.  Cooper had not run any fever at all, had started antibiotics, and was already feeling better after a nap, so we decided to go ahead and not cancel out plans. 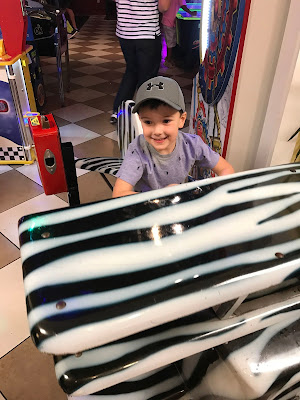 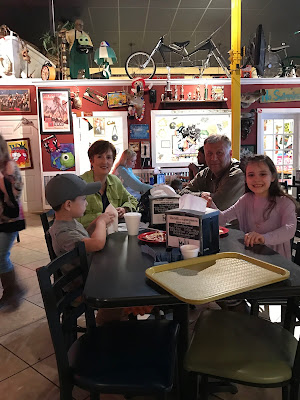 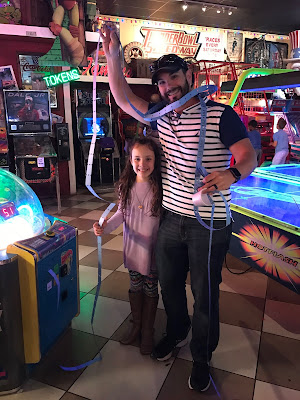 Kayla and Andrew came out to celebrate with our girl! 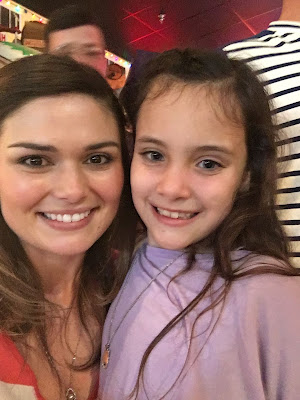 Sunday
Sunday morning, Matt and LL went to church, and Cooper and I stayed home.  Cooper insisted on taking a picture of me still in pj's while we were snuggling on the couch.  You can't say no, right? 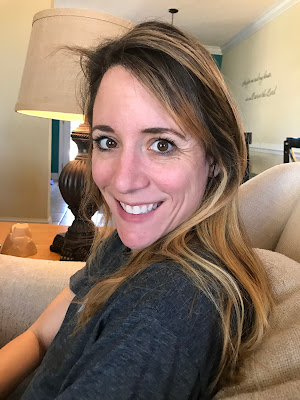 He enjoyed some solo play time with his boy toys! 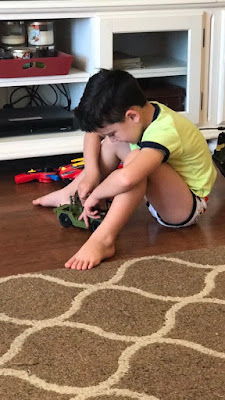 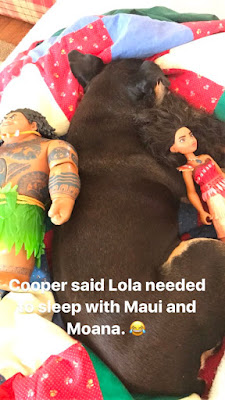 Sunday night, Matt started the process of laying our tile back down. 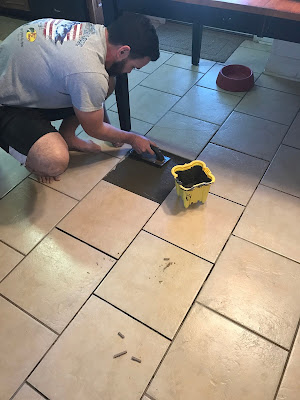 Matt found this poor hurt bird in our front yard.  We tried to help it, but it wasn't very appreciative. 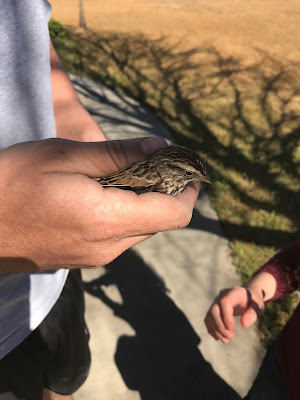 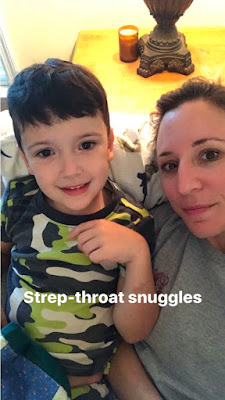 Monday
We kept Cooper home from school on Monday just to be safe, and the kids literally spent almost 3 hours in his room playing and being so incredibly sweet to each other. 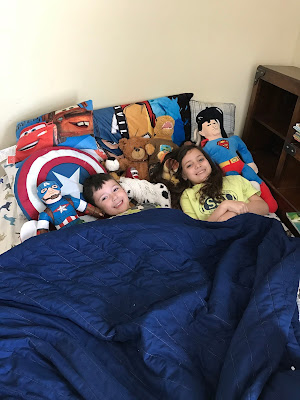 That afternoon, the kids spent some time with Grammy and Pop while Matt and I had to go out of town for a doctor's appointment.

It wasn't exactly the weekend we had planned, but we still made the best of it!