When LL and I took our trip to Disney last year with Aunt Laura and Ben, all I could think about was how excited I was to go back with Matt and Cooper.  I was just so excited to be back with my whole little family.  That was in the fall of 2013, and Cooper was only a little over 1 year old.  We took LL to Disney for the first time about 3 months before she turned 3.  We started thinking then about when to go back with Cooper, and we knew that the early part of 2015 would be the best.  Cooper would be a little over 2.5 (so a few months younger than LL went on her first trip), but we wanted to go at this time for several reasons: 1- the temperature would be cooler.  Both in September and November it was a HOT trip! 2 - It would be a low crowd level.  After battling the crowds over Thanksgiving, we would not be making that mistake again.  3- We could also go for LL's birthday. 4 - Cooper would still be under 3 (and free!). We originally made plans trying to go the first week in February so that we could literally be there for LL's birthday.  The crowd levels didn't cooperate as much as we would have liked, so we ended up planning a trip at the beginning of January for a few days.

We planned our vacation for a Saturday - Tuesday.  We left on Saturday, did parks on Sunday/Monday, and came home on Tuesday.  It worked out perfectly!


The kids were all packed up and ready to go! 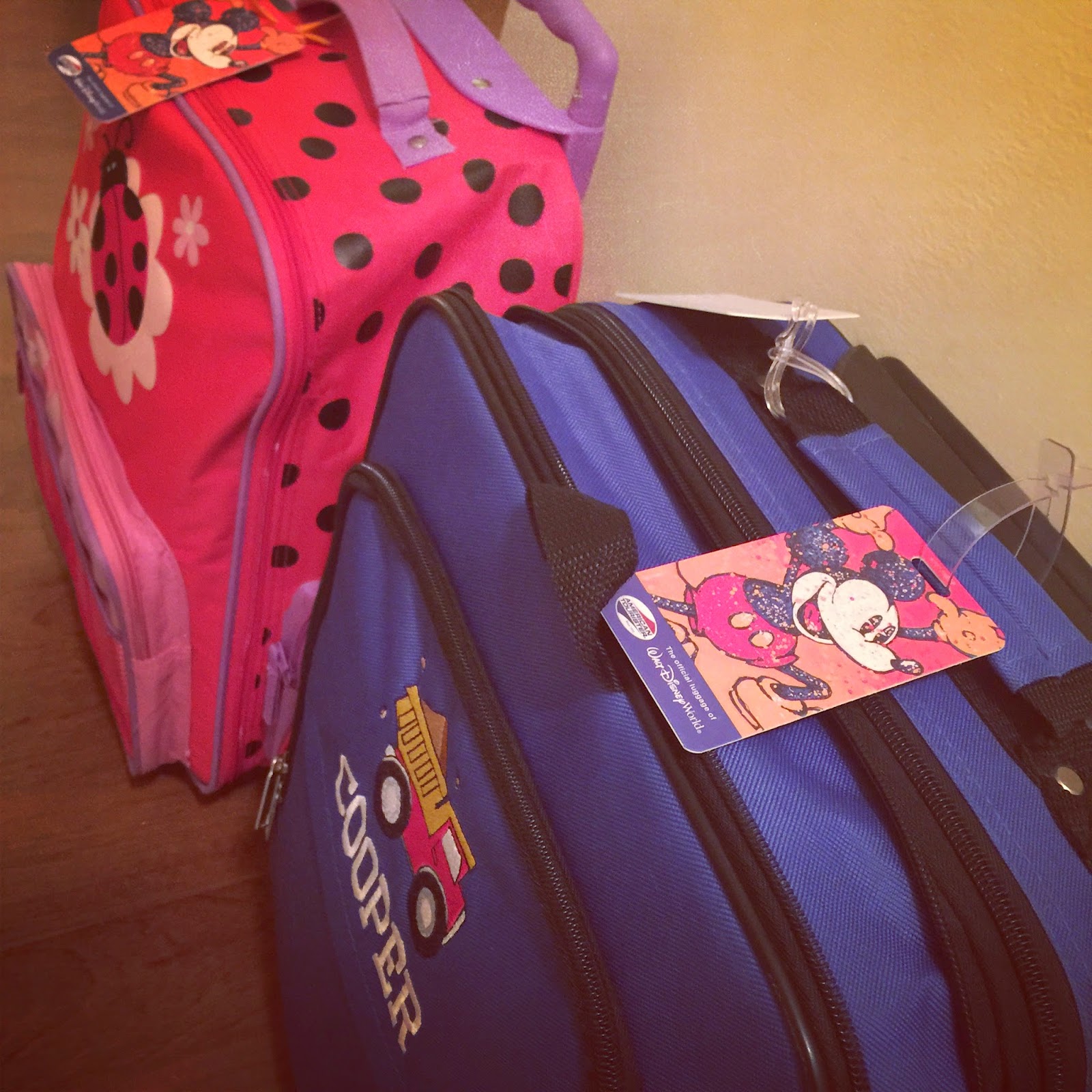 We left for our vacation by 6:45 Saturday morning.  Since we weren't going to be going to any parks on Saturday, I wanted to make it a special day in other ways.  I made us lunch reservations at The Rainforest Cafe for 11:00 on Saturday.  That meant that we had to leave super early to get there in time!  I made it for 11:00 for a few reasons though - I knew the kids would be hungry for lunch by 12:00, I knew it would take us a while to walk to the restaurant, and I knew that we would have to wait a while for our food once we got there.  The kids were excellent travelers and did great on the way down. 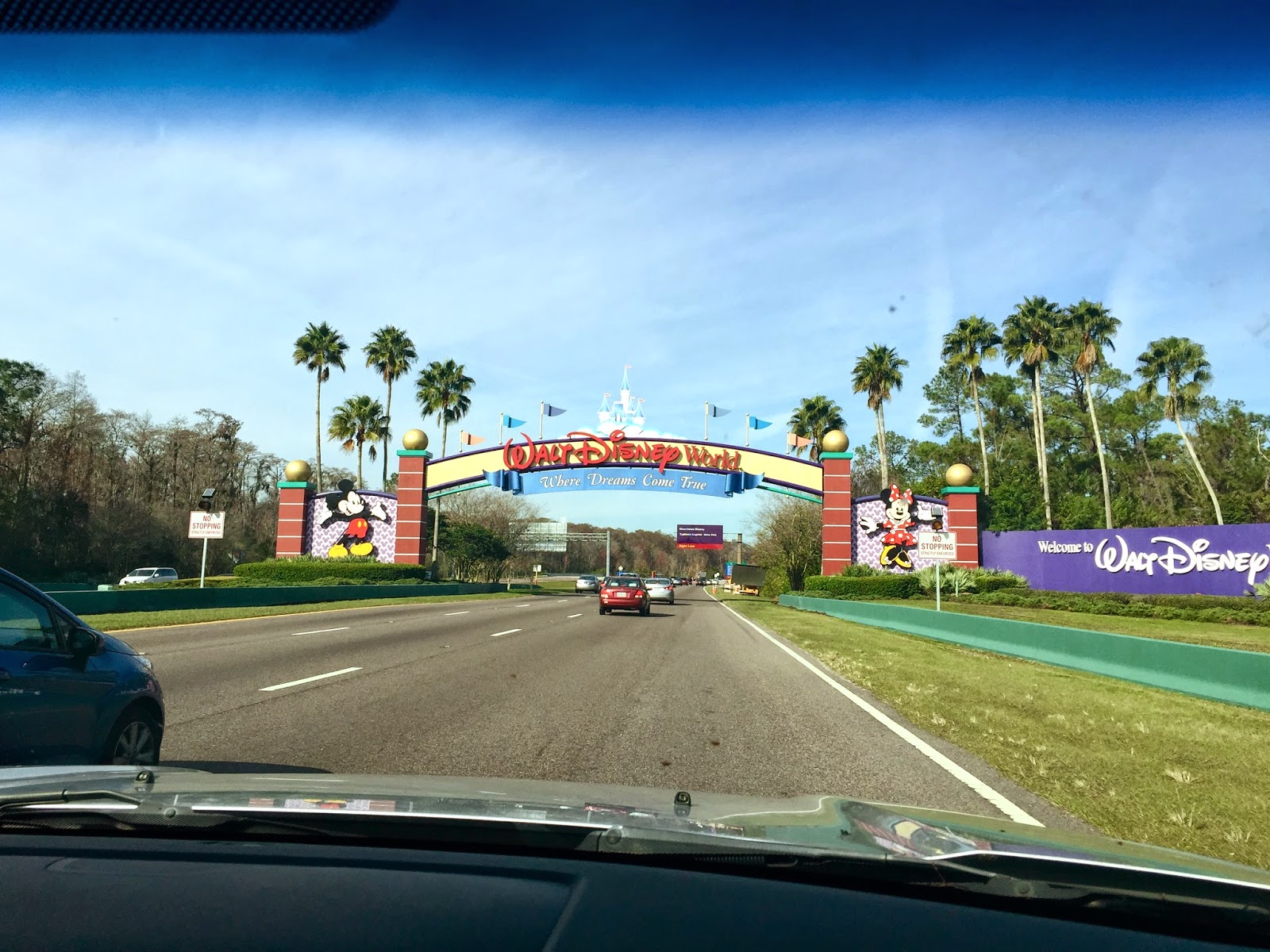 We went straight to Downtown Disney and to lunch.  The kids absolutely loved it.  It was so funny to watch Cooper take it all in!  He had, literally, never seen anything like this in his entire life! 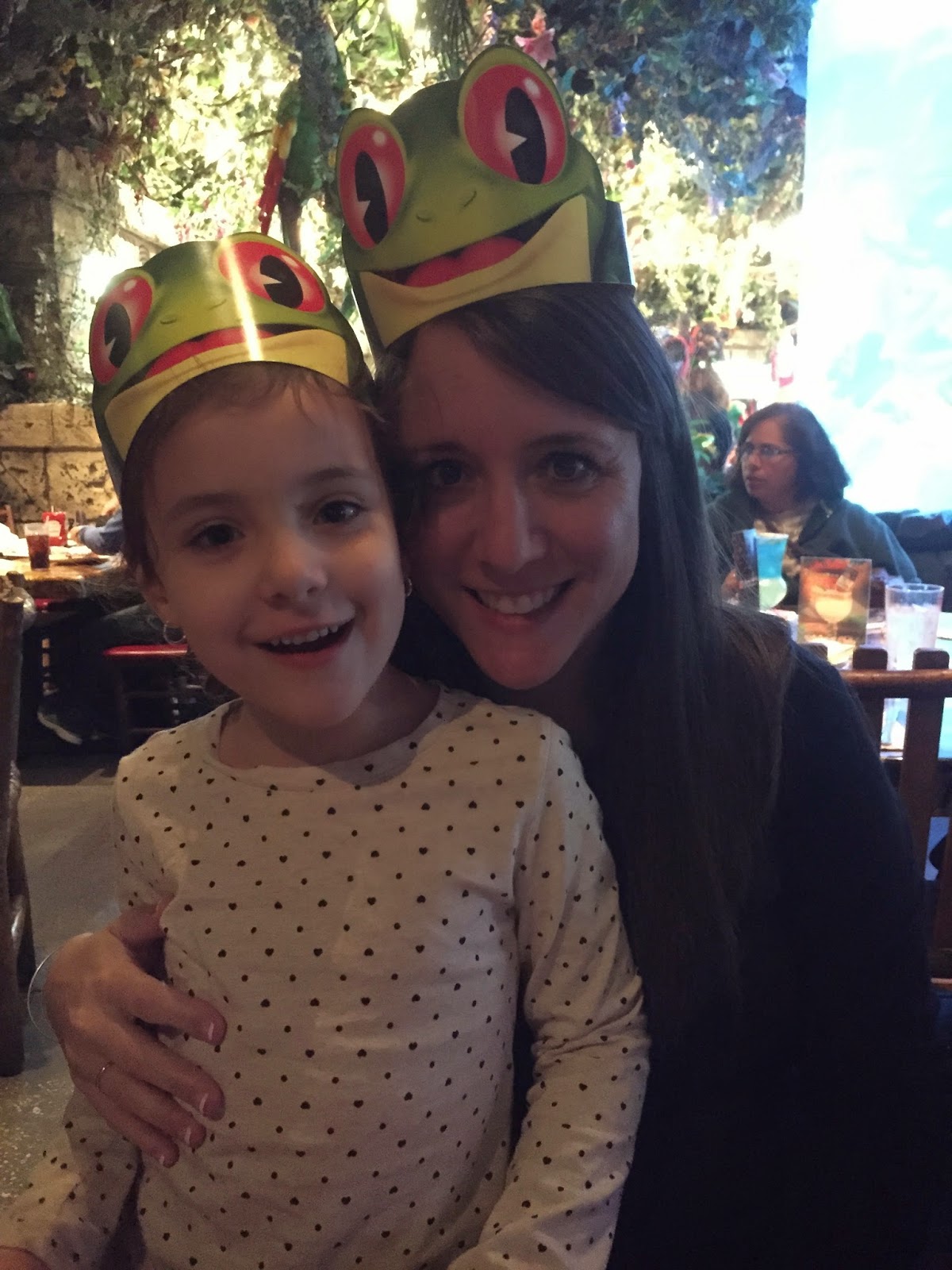 We actually sat at the exact same table that we did when we came with Ben and Aunt Laura.  What are the odds?? 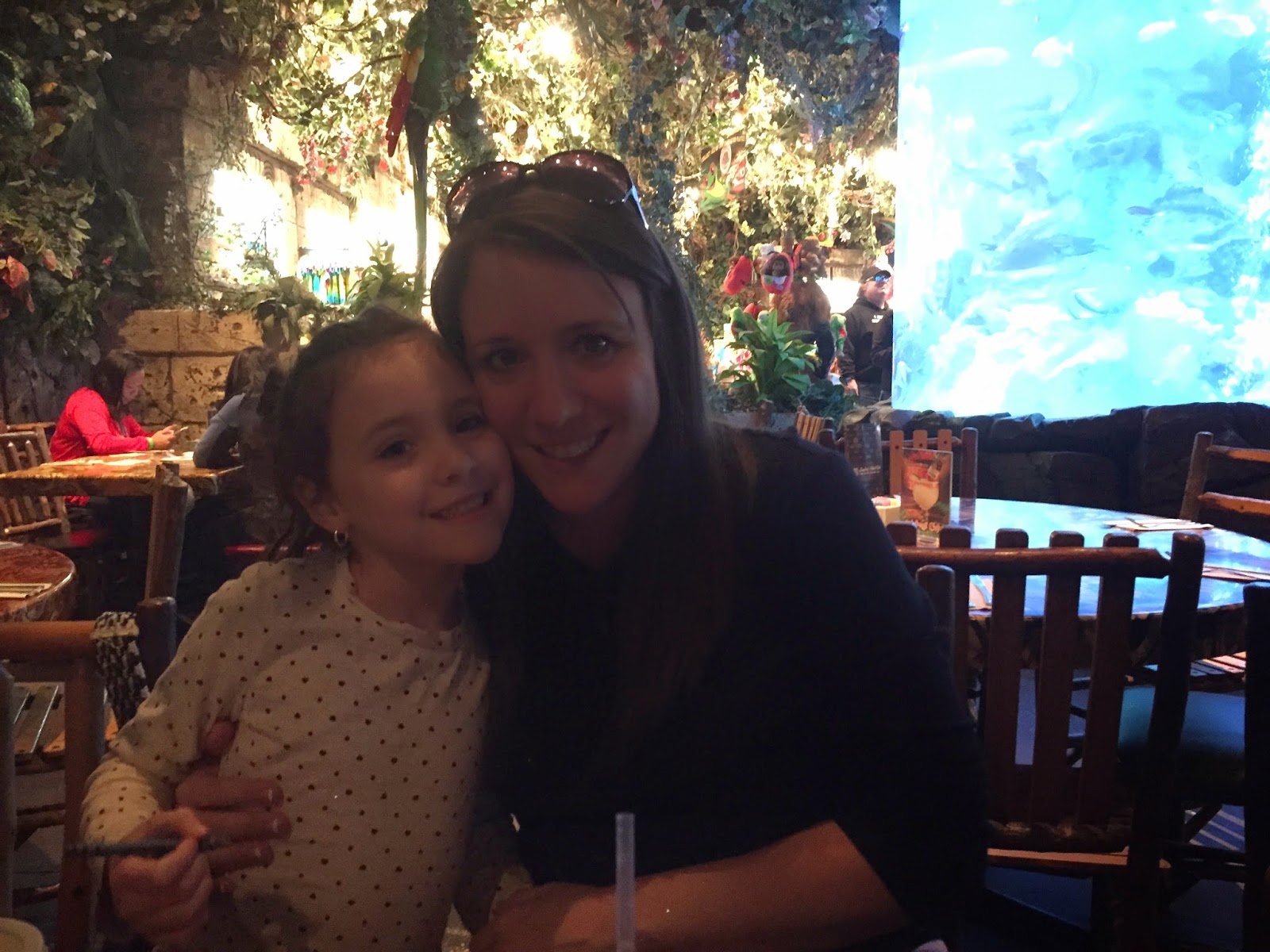 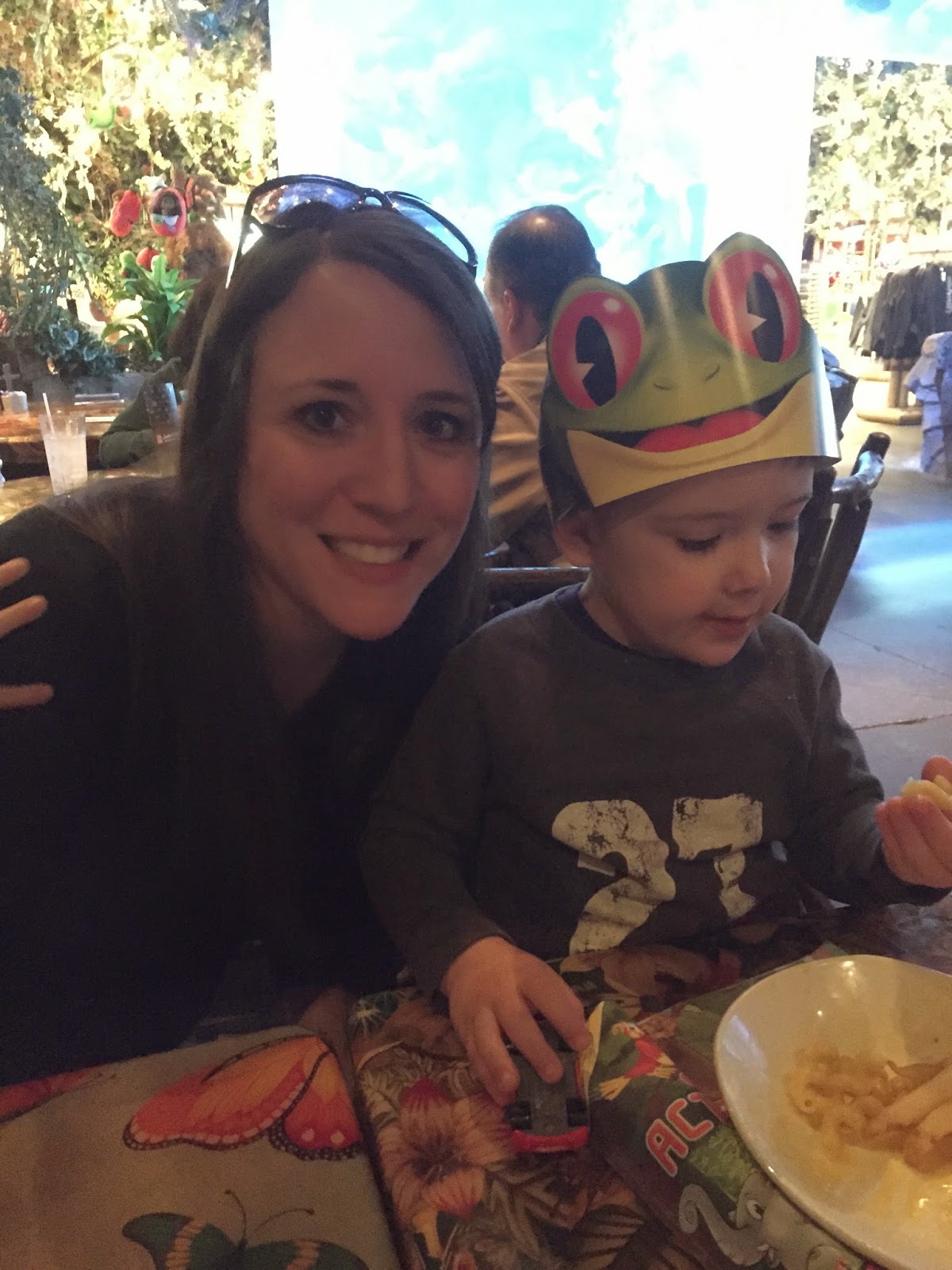 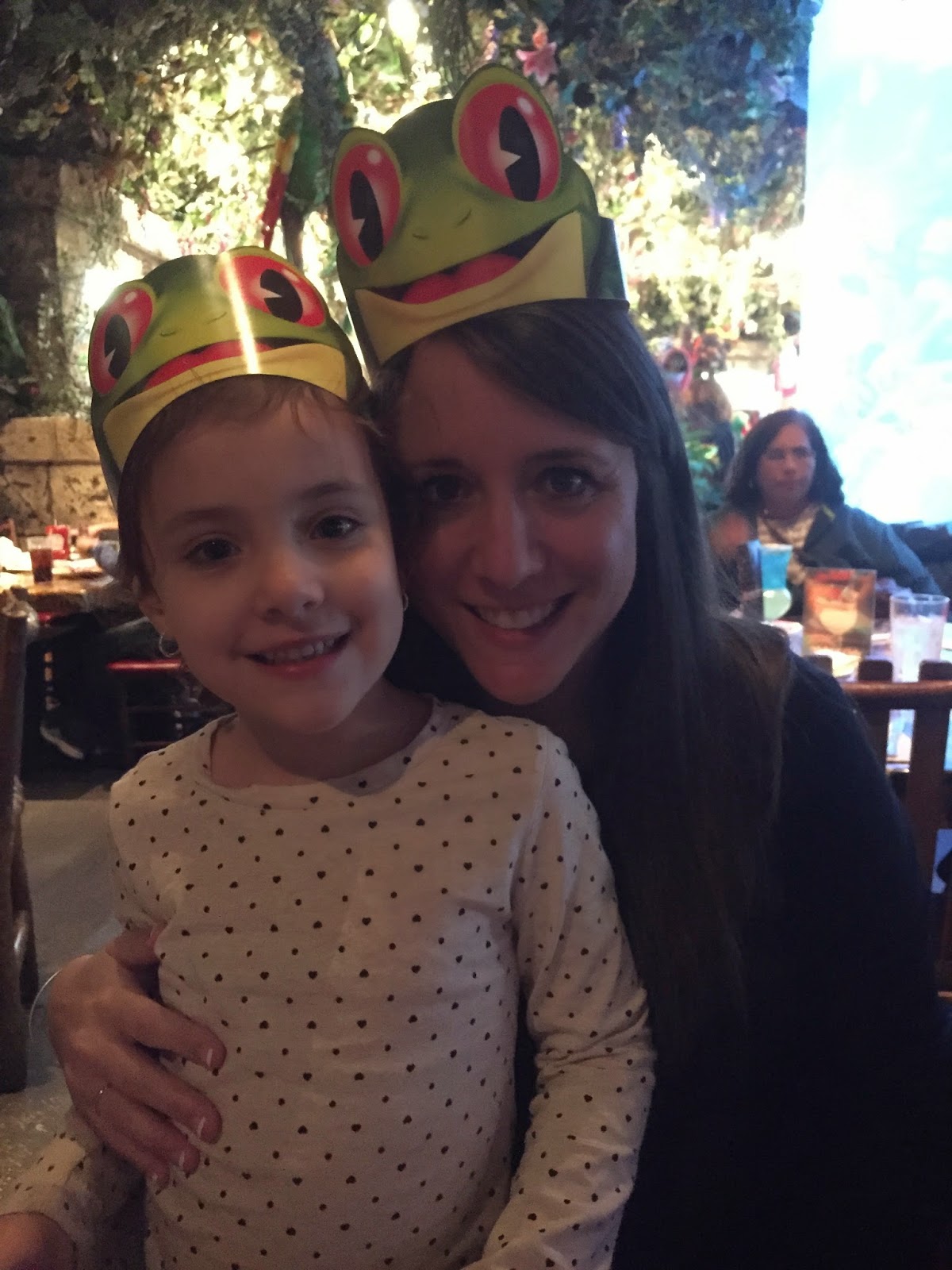 Cooper was a little nervous, but they liked watching the alligator. 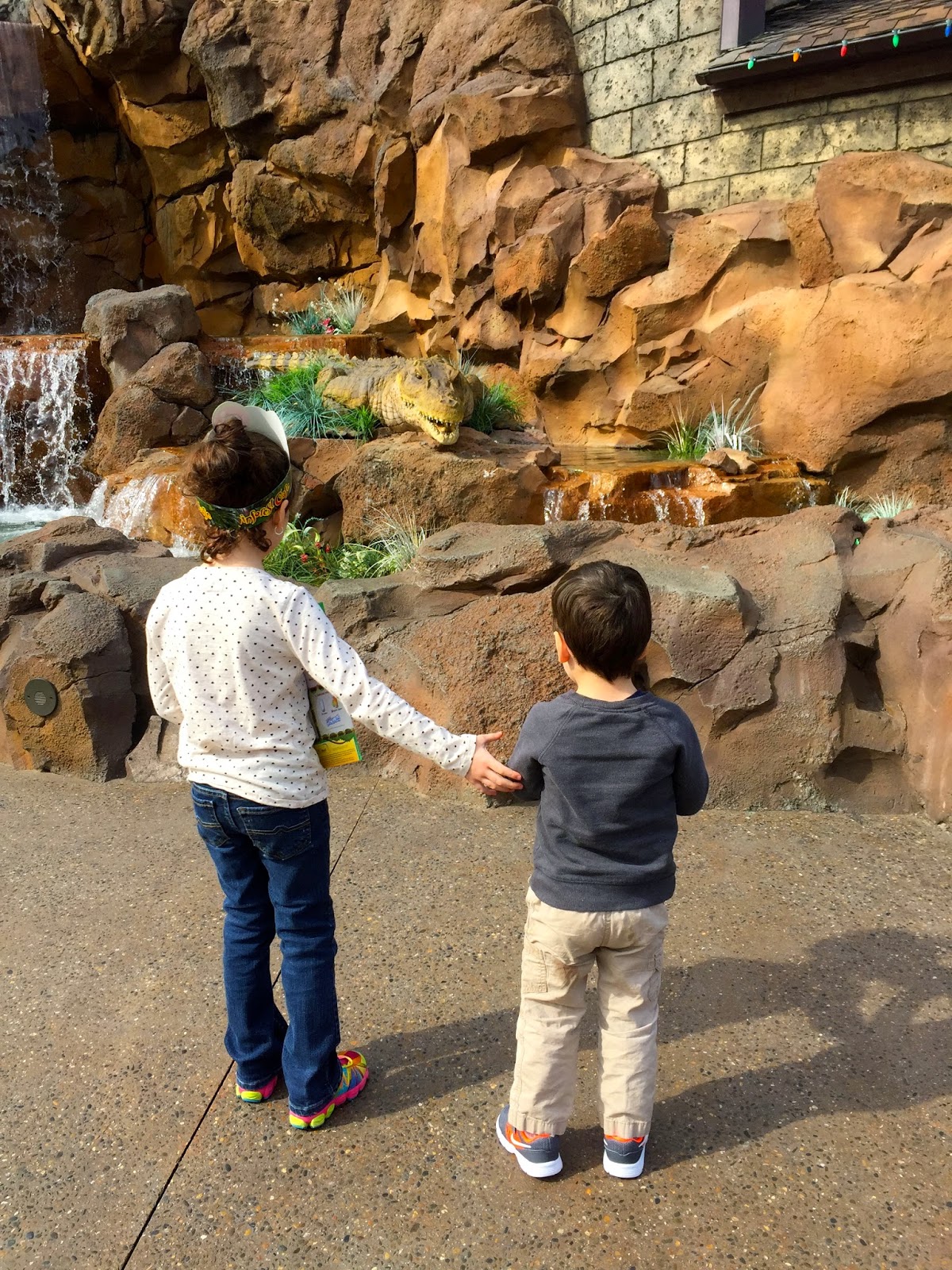 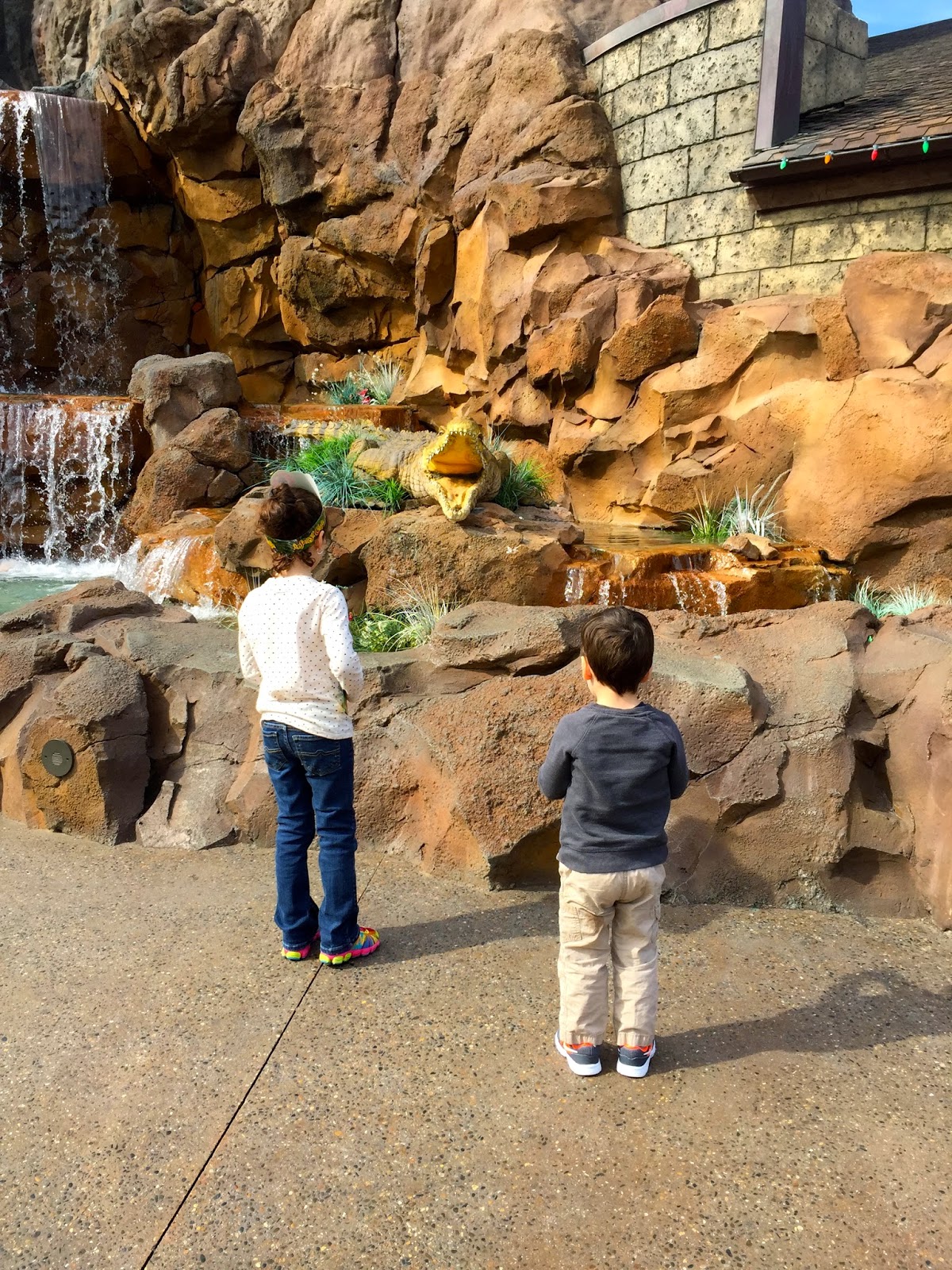 After lunch, we walked to the Disney store.  The grandparents had given each kid a little bit of spending money, so I knew they would love a fun toy to kick off the vacation.  Cooper wanted Cars, of course.  He had his Lightening that we came with, and he picked out another Lightening with a Mickey hat and Mater with a Goofy hat.  He was a happy boy! 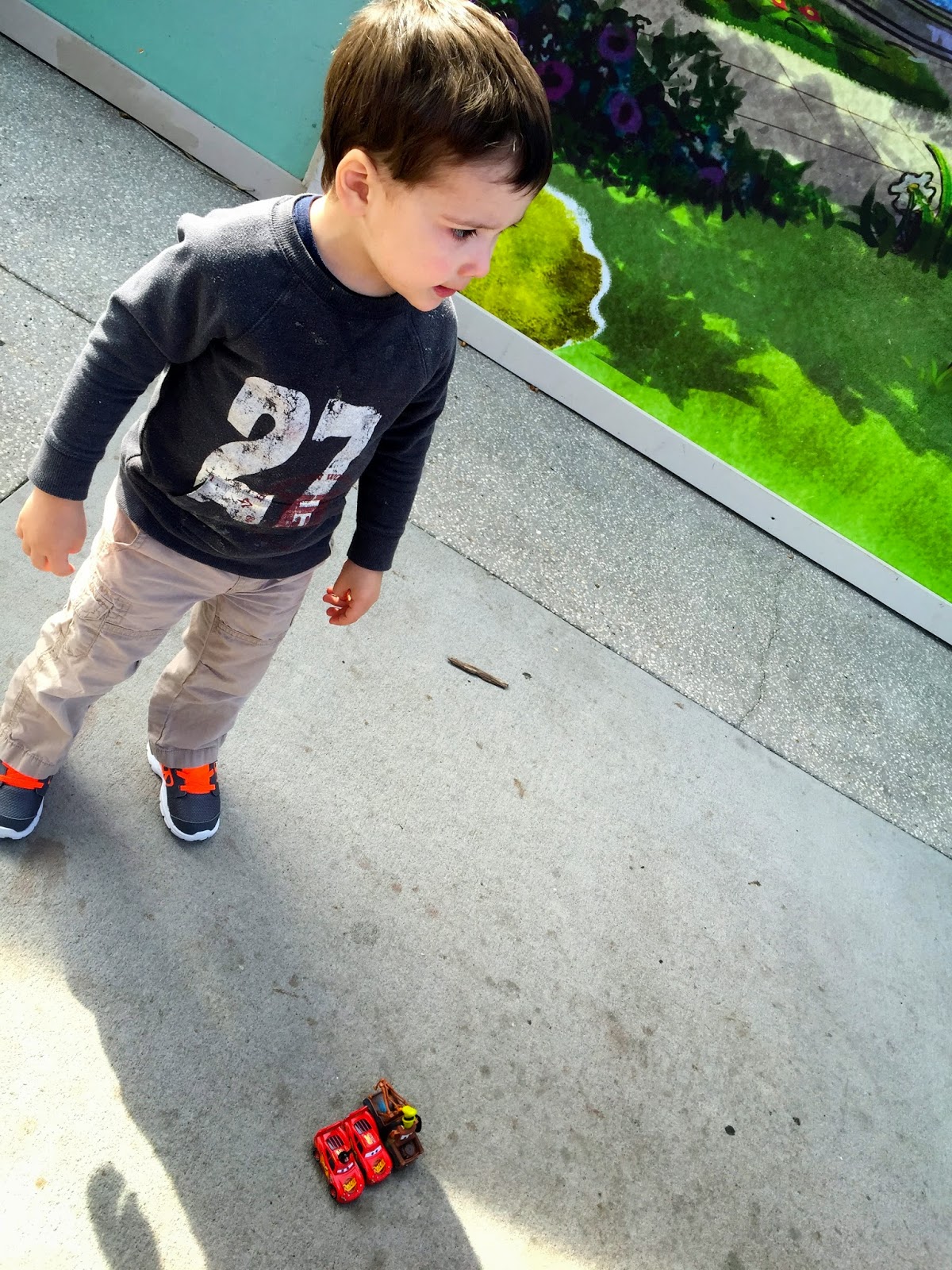 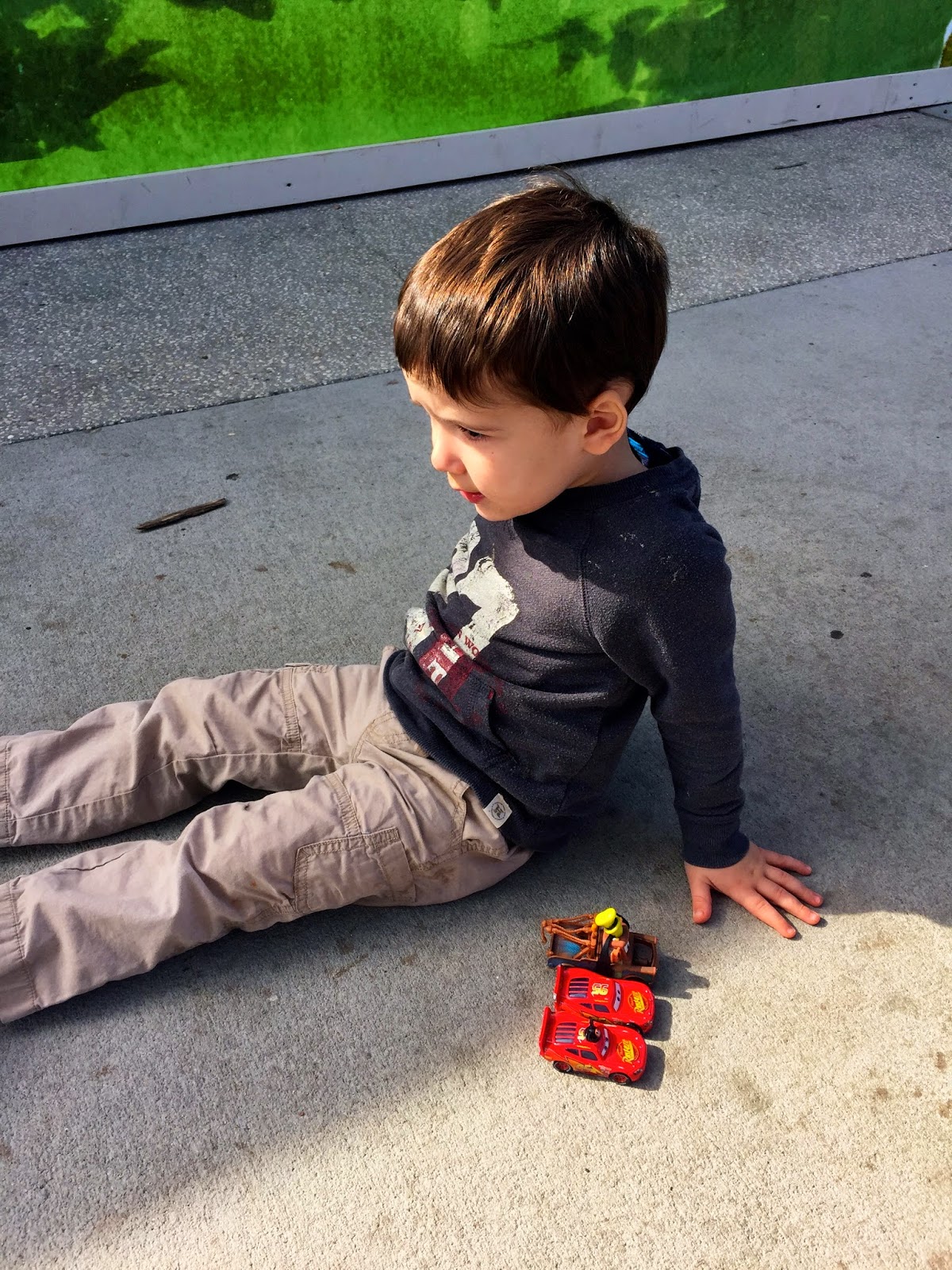 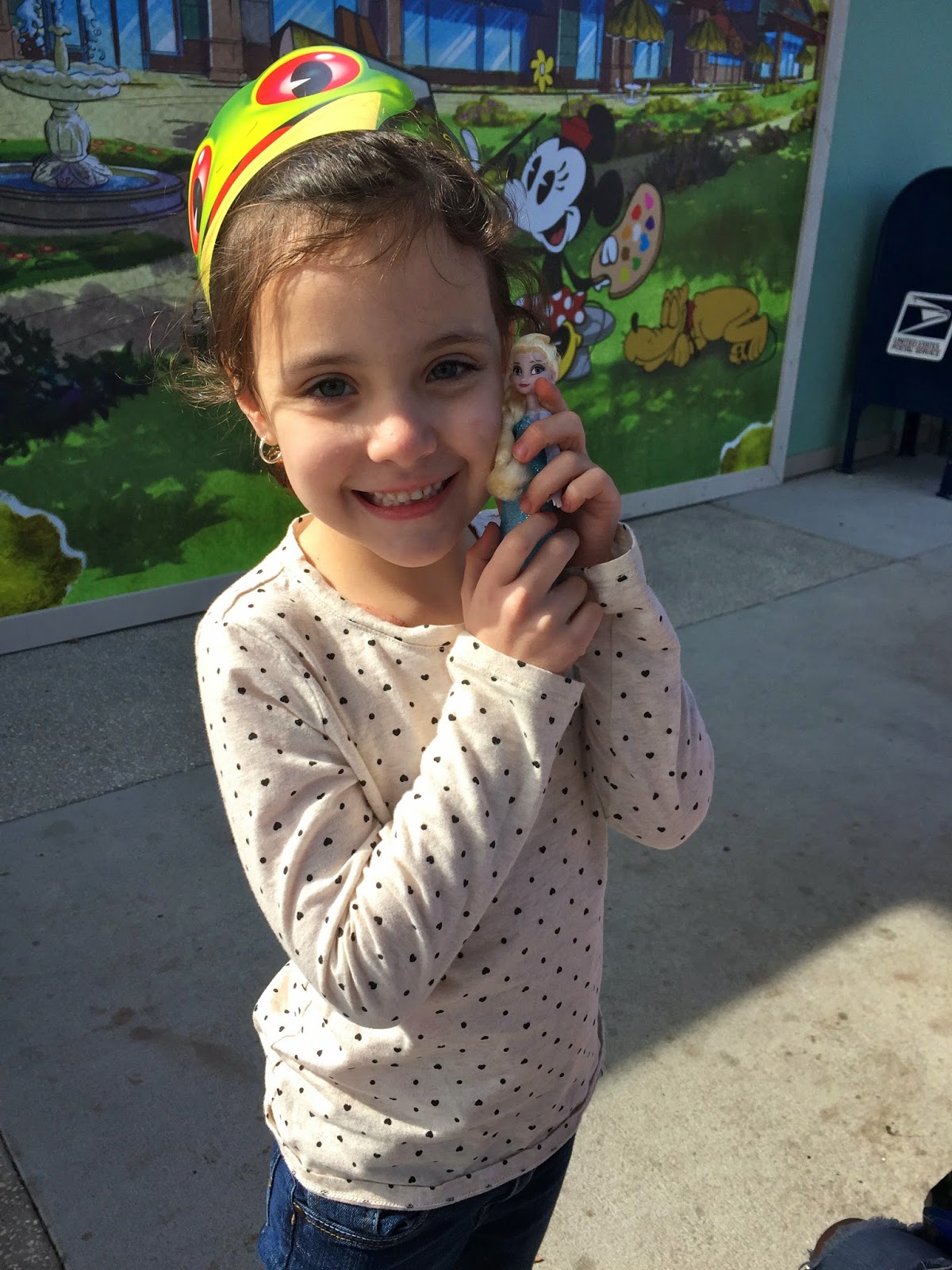 We headed back the car because Cooper was starting to lose it.  It was nap time, and he was worn out from the trip and the excitement.  He was out before we even left the parking lot of Downtown Disney!  We were staying in the Art of Animation again, so we headed that way to see if we could go ahead and check in. 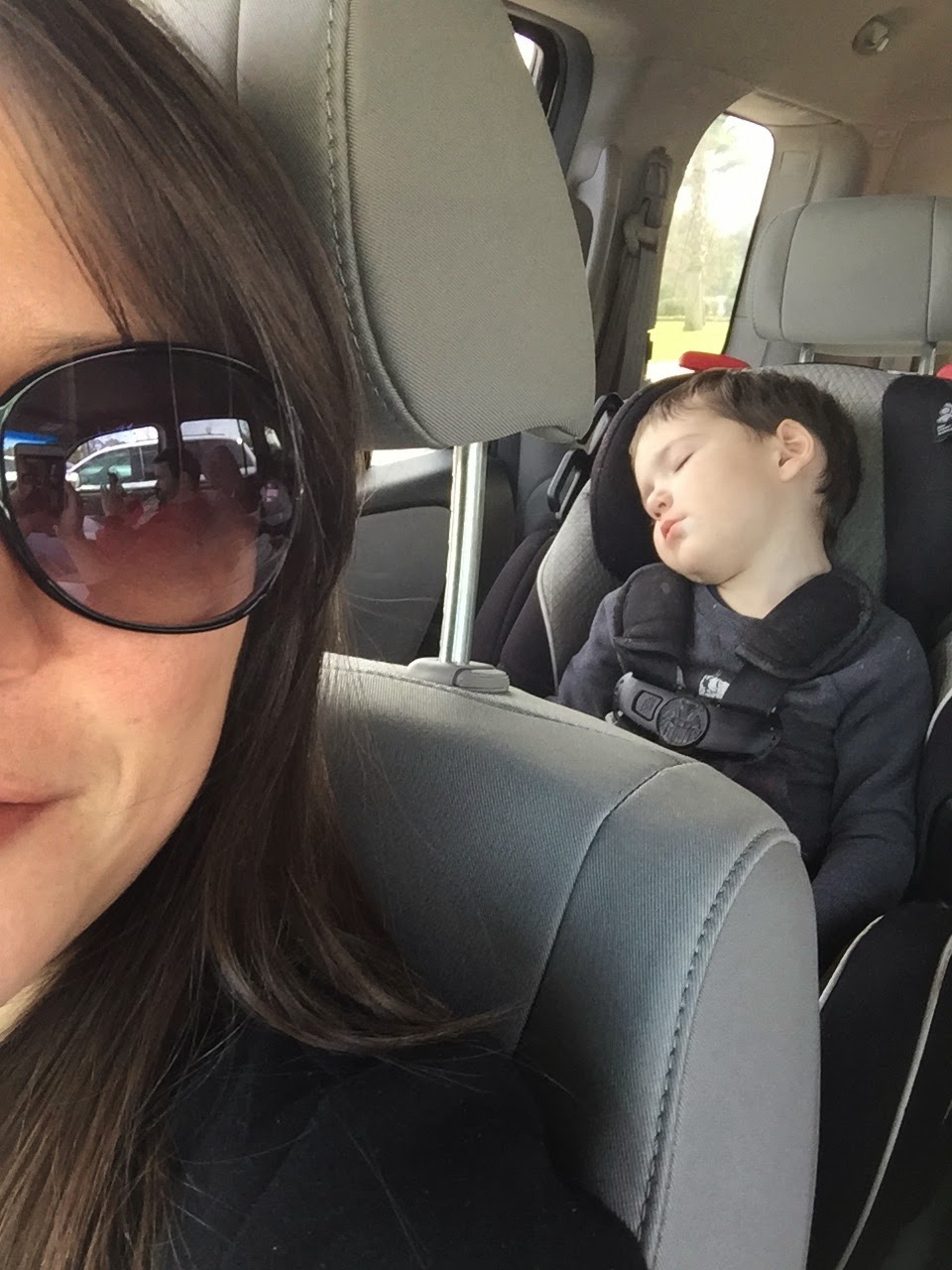 Matt (and sleeping Cooper) hung out in the car while LL and I went inside to check in.  We were there a little early, but luckily they already had the room ready for us.  Last time, we stayed in the Cars suite, but since it was technically LL's birthday trip, we let her pick what room to stay in.  She picked Nemo!  The kids and I (and a very sleepy Cooper!) hung out in the room while Daddy finished unpacking the car. We took a little down time in the room, and then we headed out to play on the playground and walk around the resort. 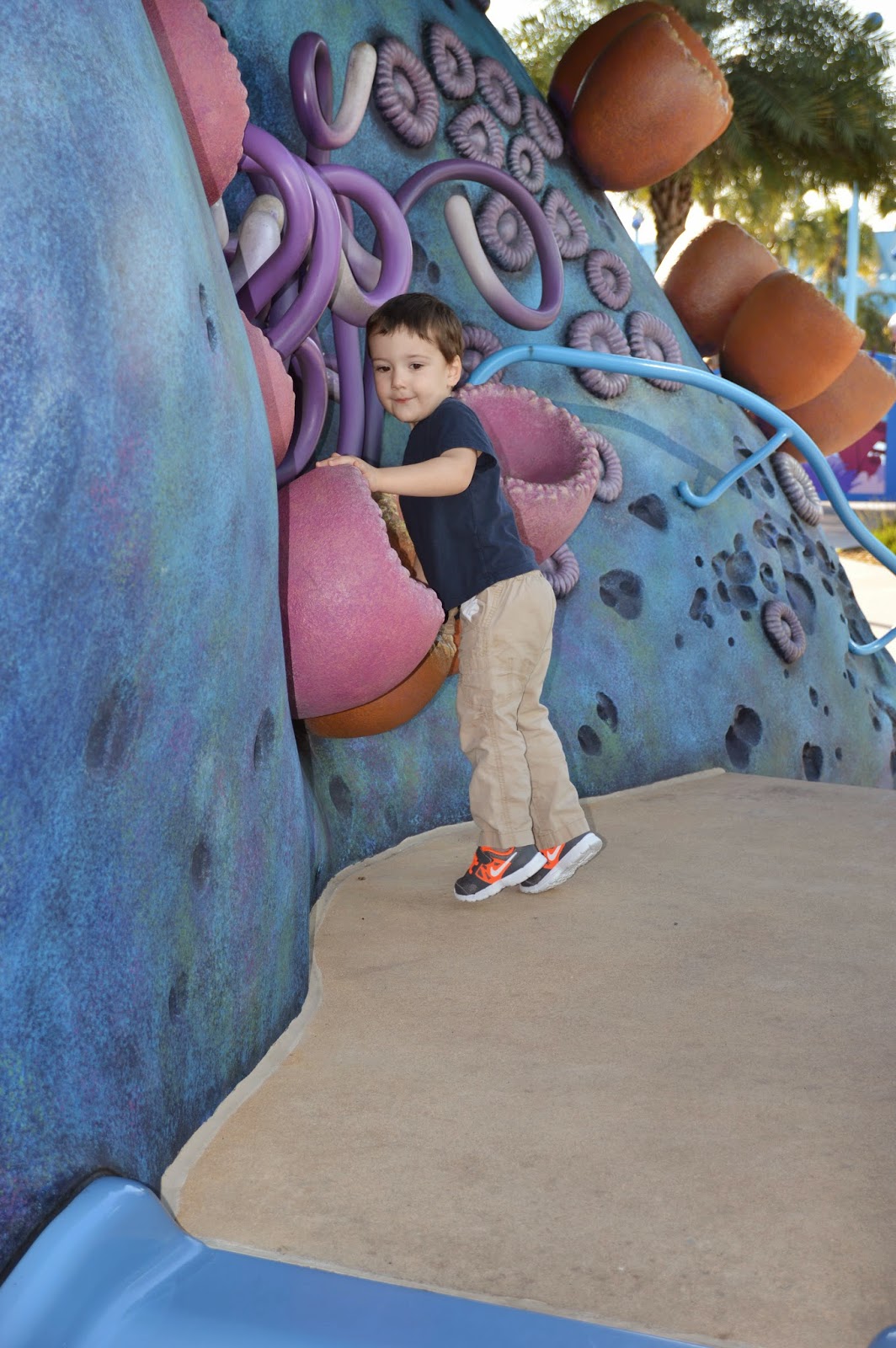 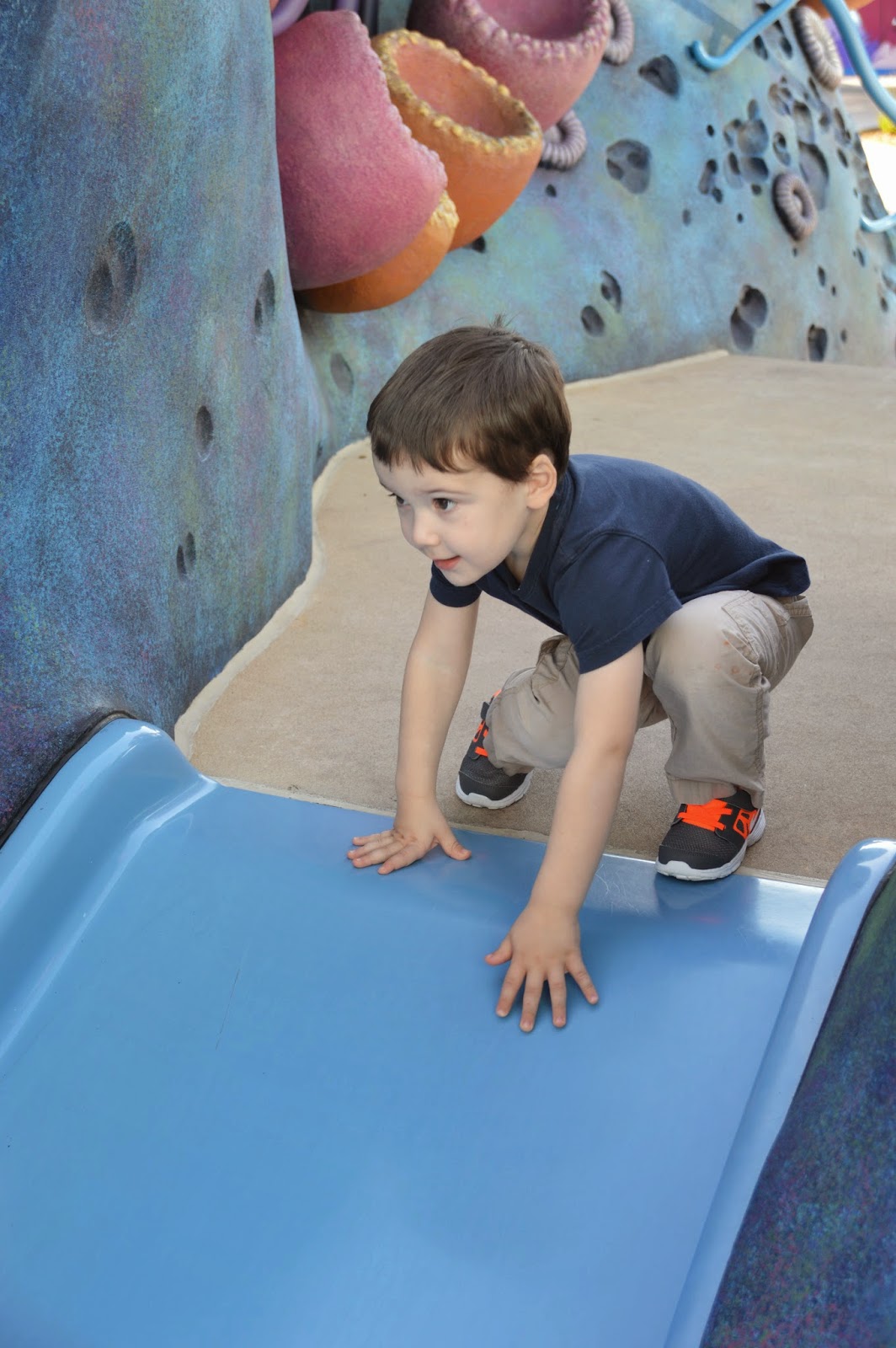 I LOVE all of the details of the resort! 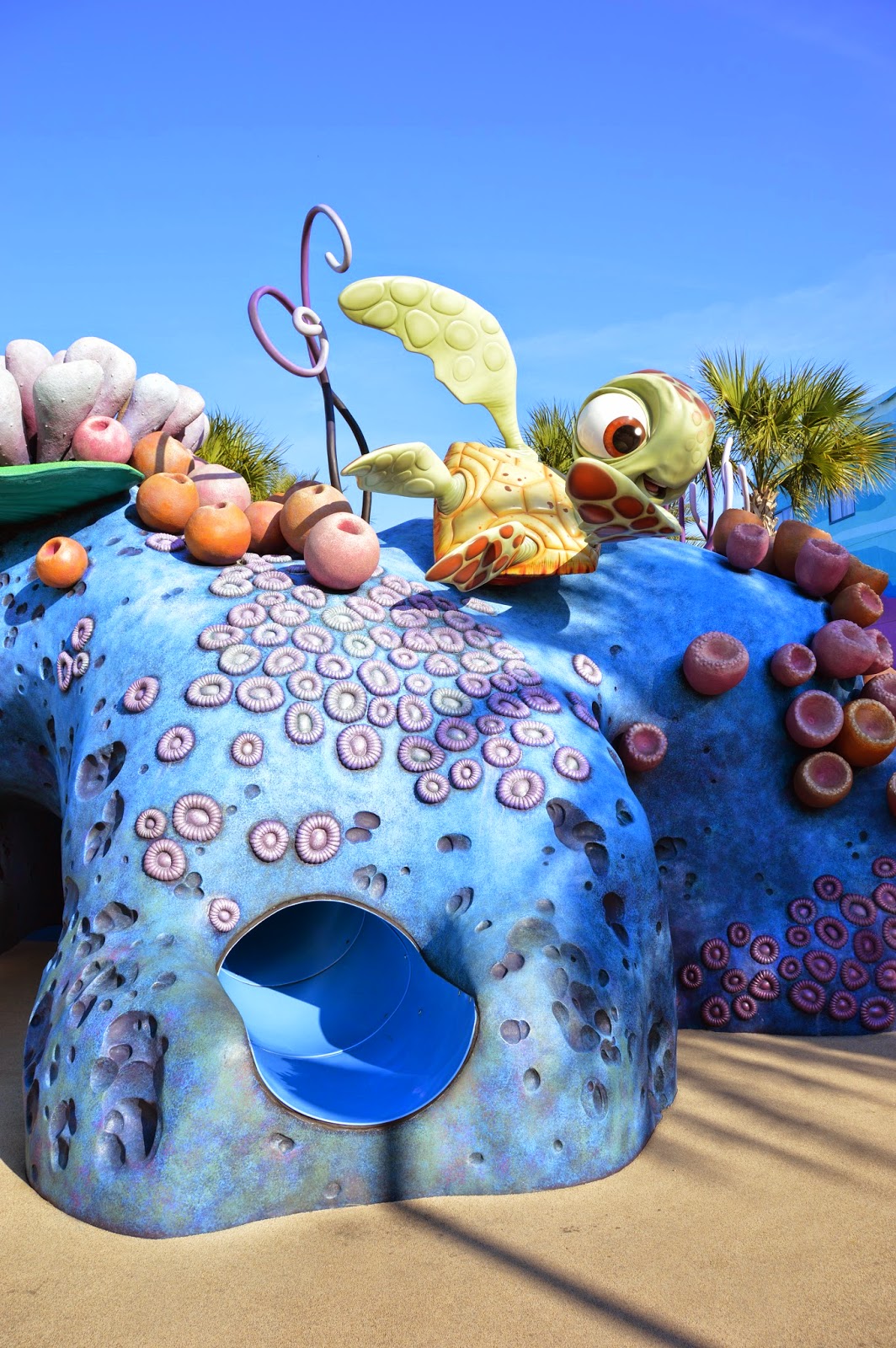 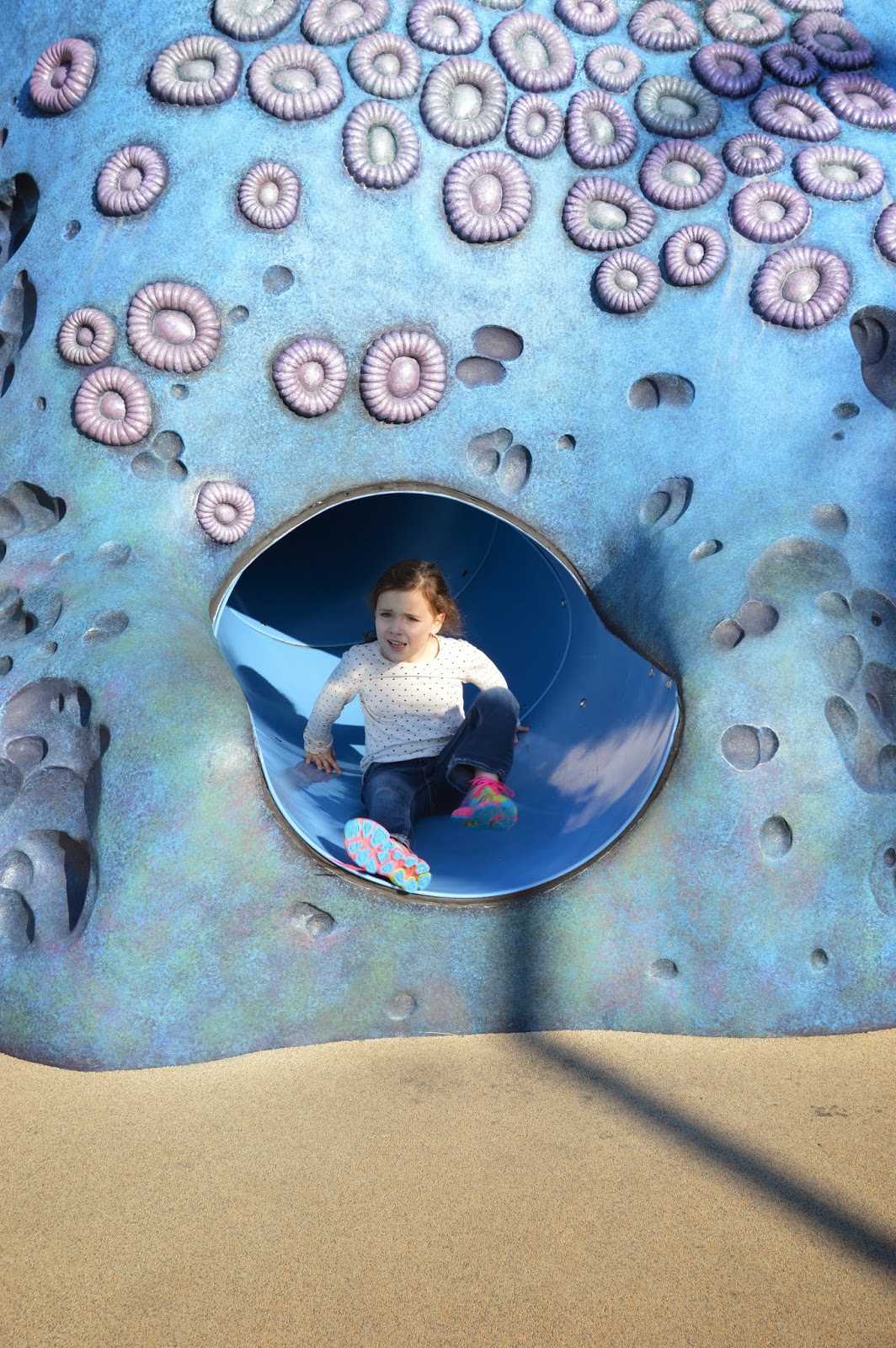 I'm pretty sure our room is the one with the curtain open. 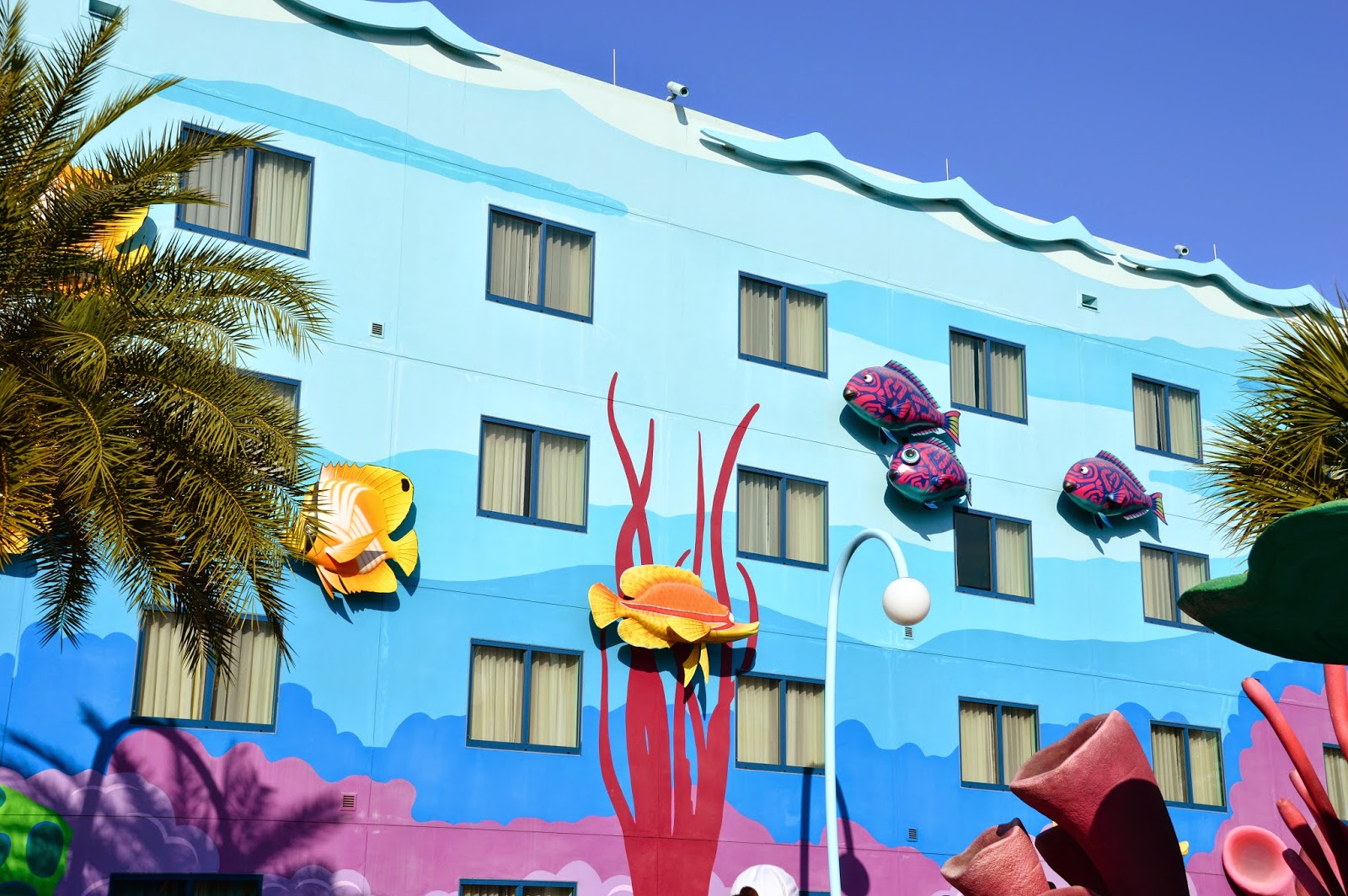 After playing on the playground, we headed to the Cars section of the resort.  LL loved it because she remembered it from last time, and Cooper loved it because Cars is his favorite thing in the world. 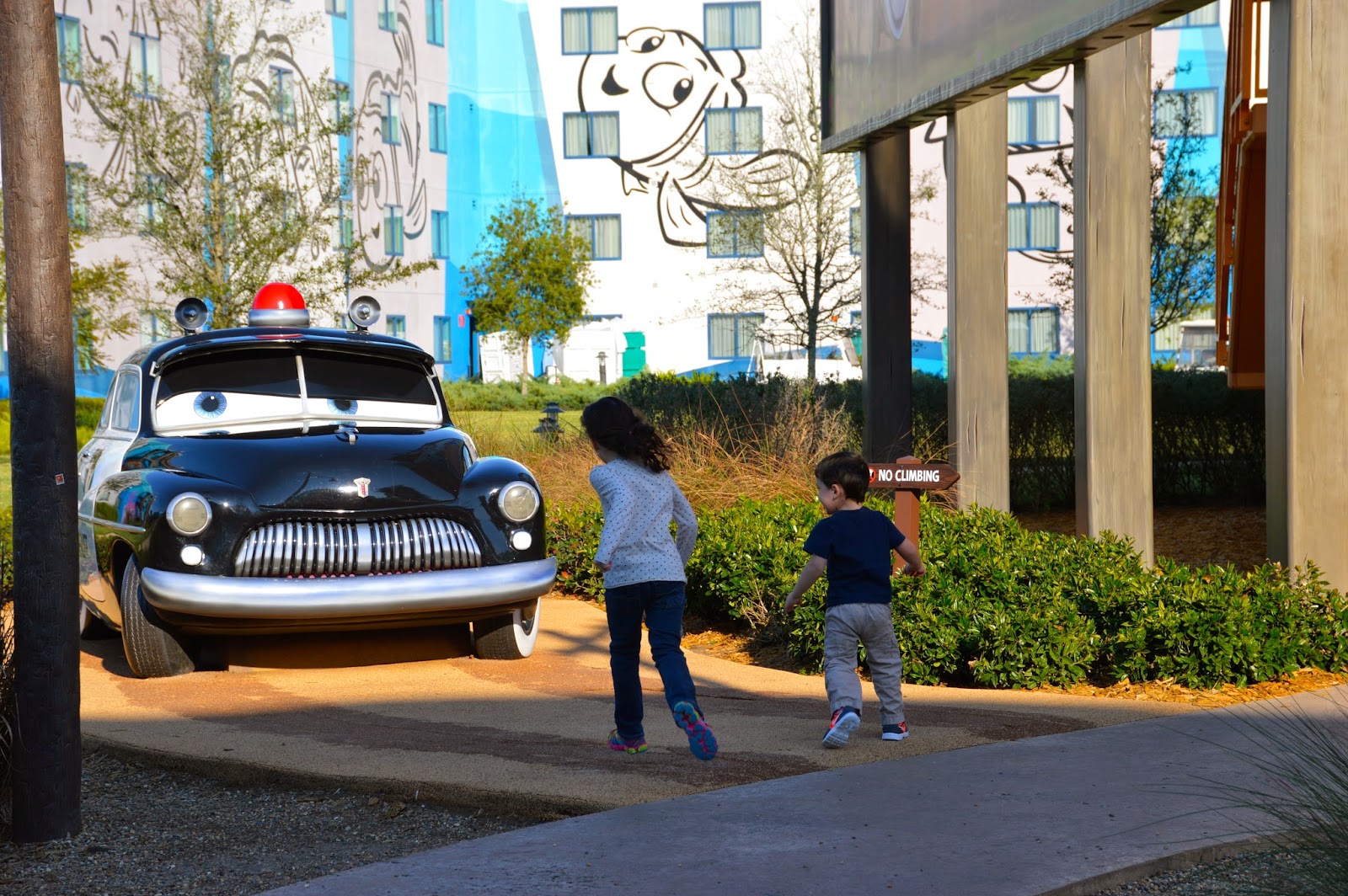 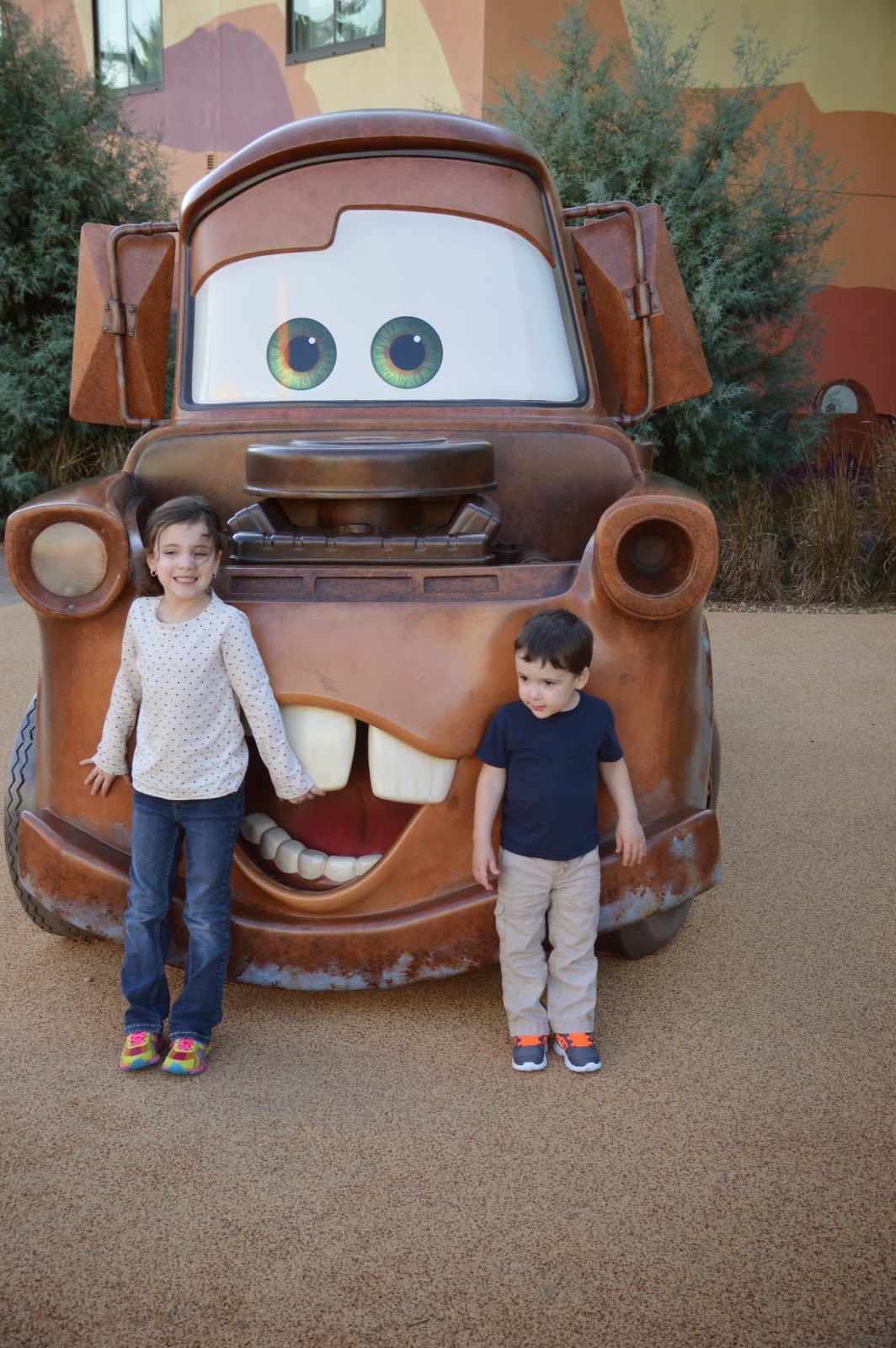 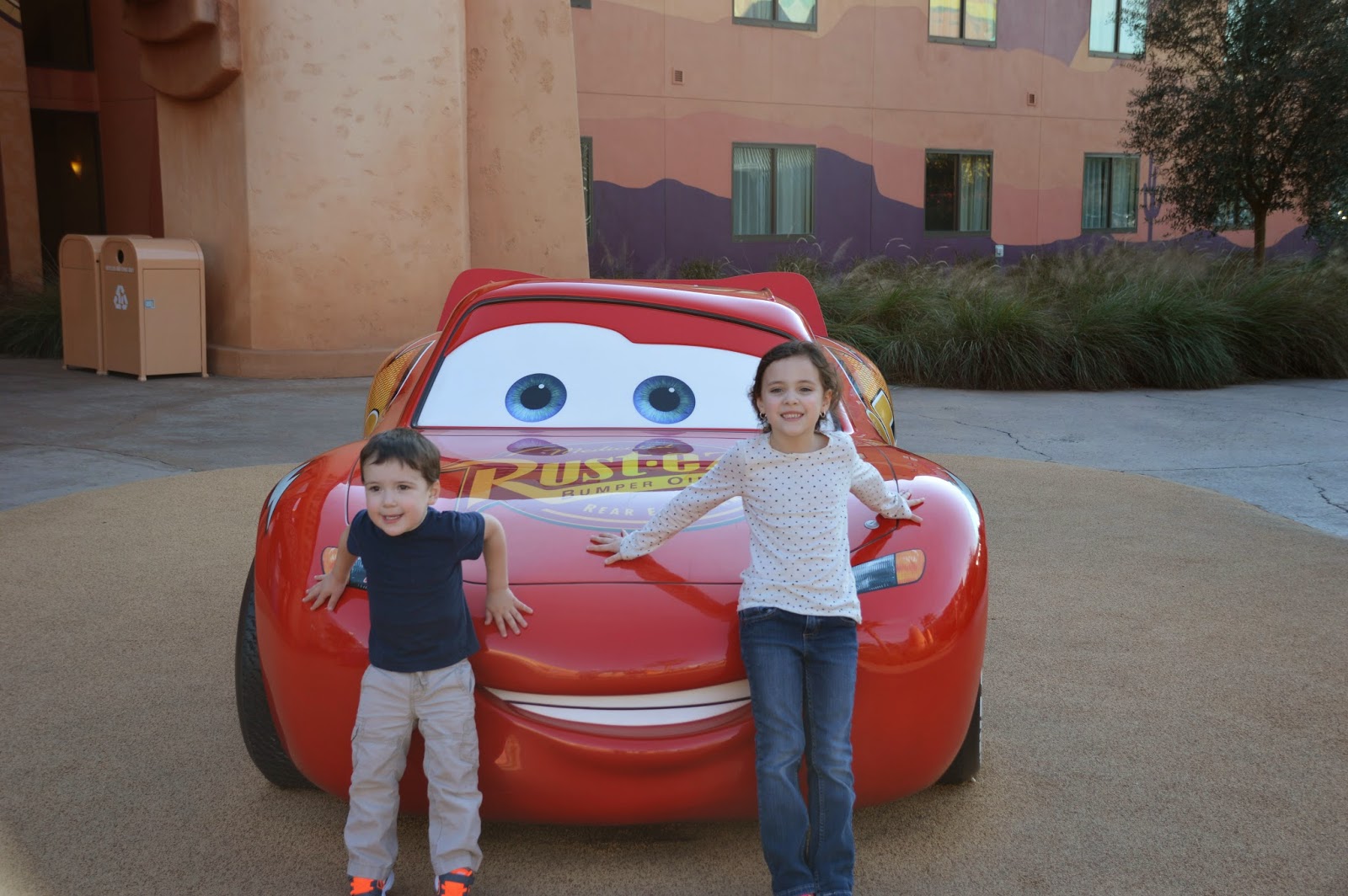 Hands down one of my favorite pictures from the trip!  This little boy was so happy! 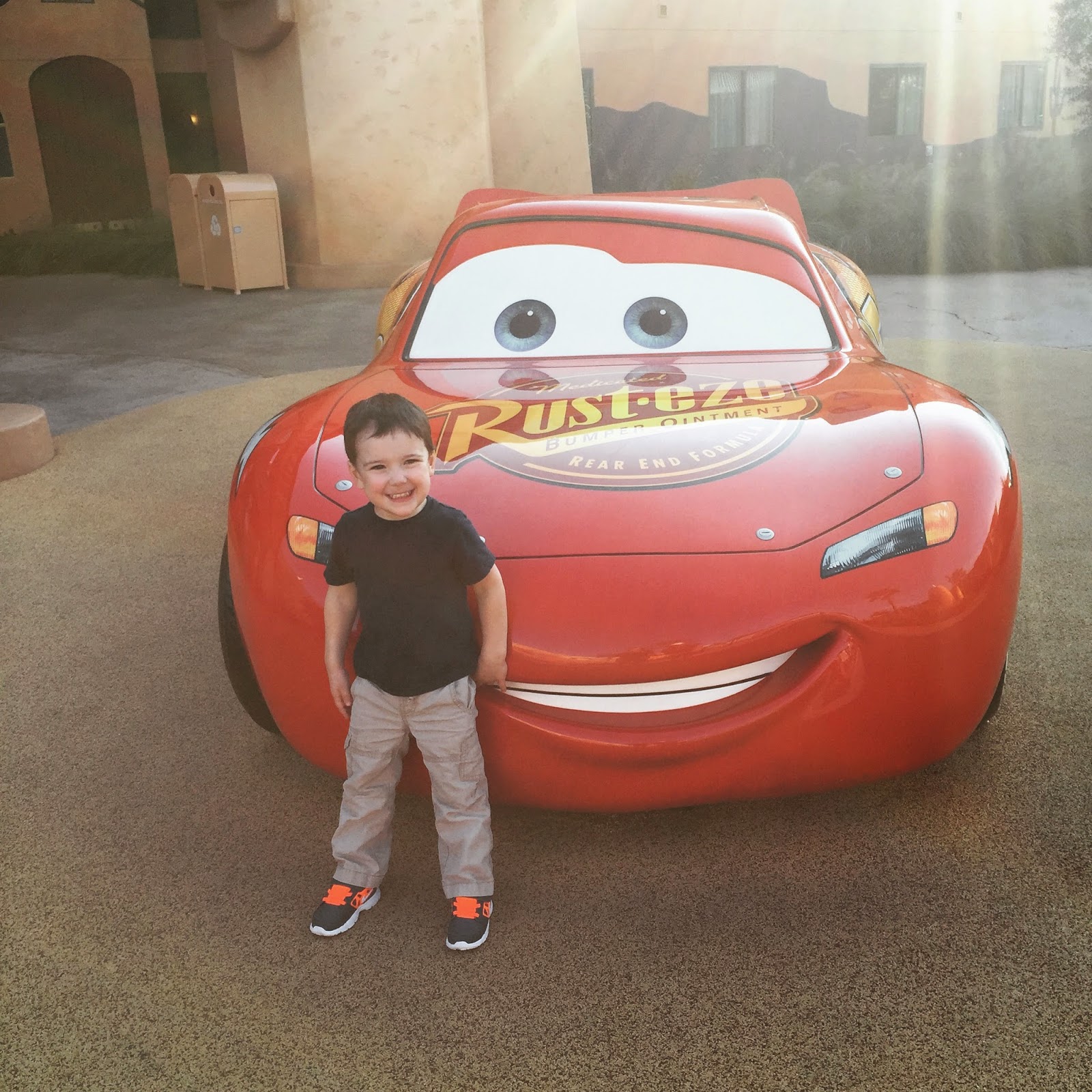 We went to the Little Mermaid section of the resort, which I had never been to before. 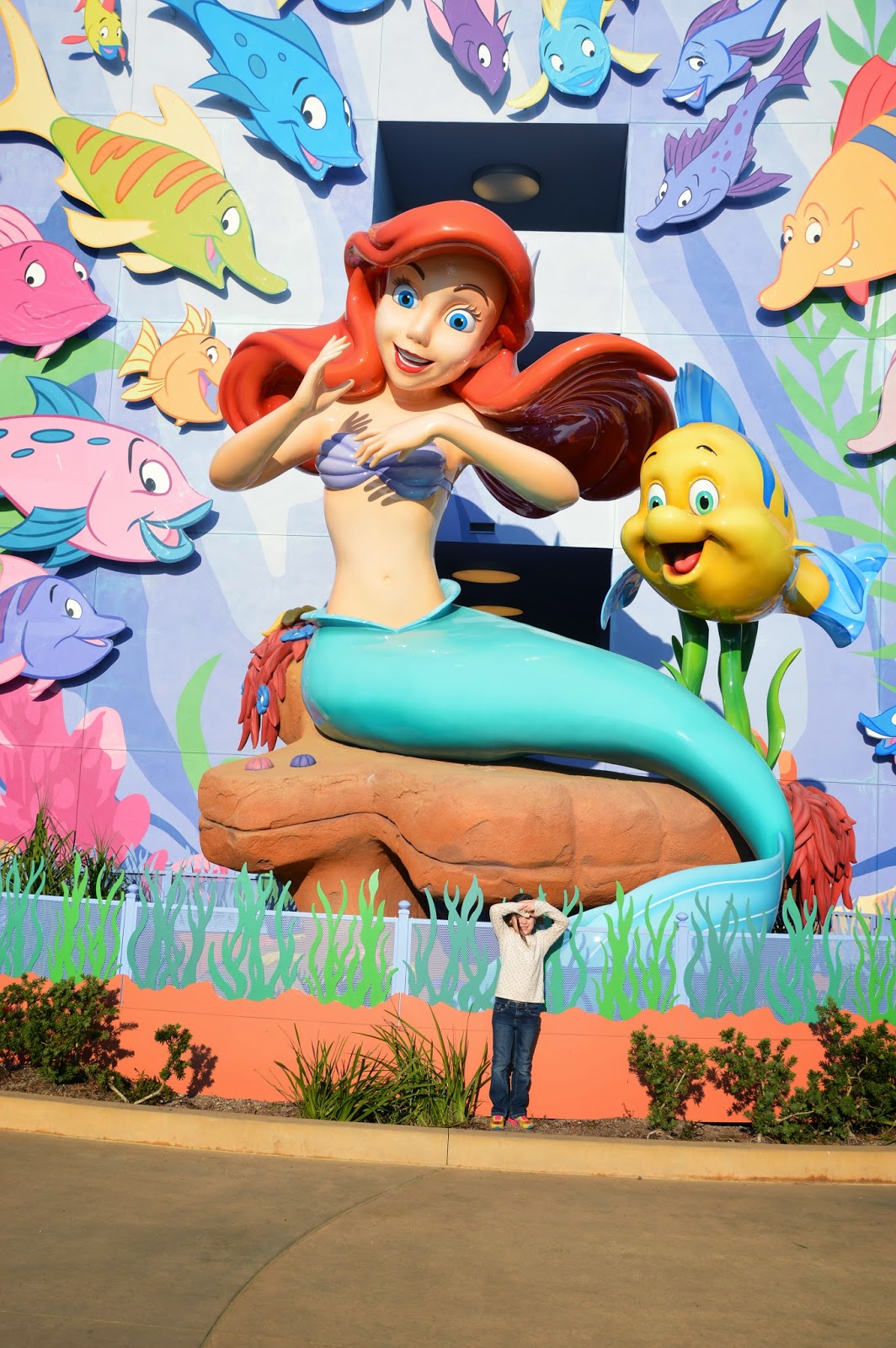 I had also never seen the Lion King section.  It was so neat! 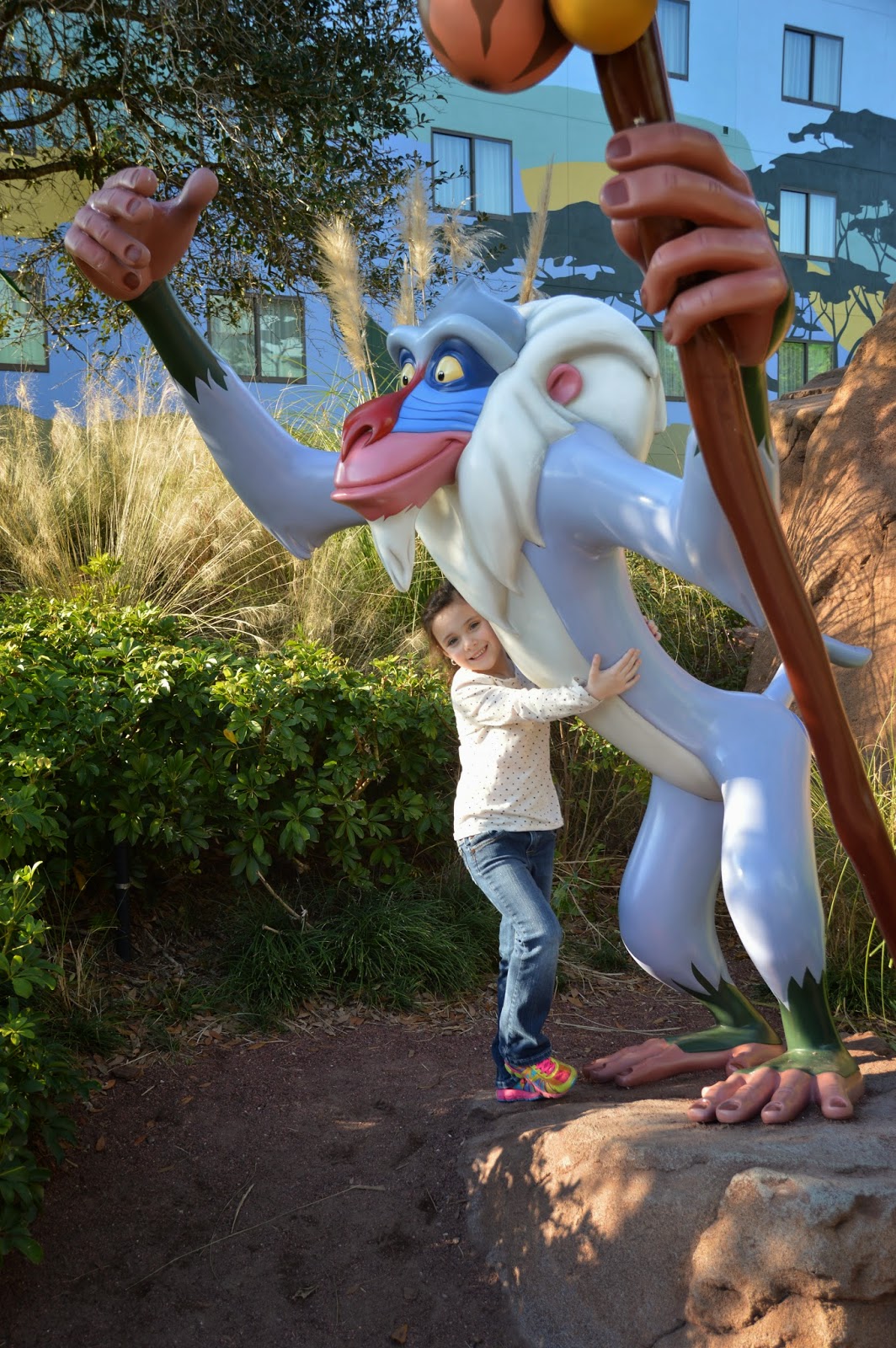 After we walked the entire resort, we went and picked up our stroller rental.  We have a sit and stand at home, but that thing is a beast and it  not great at turning and such.  We decided to just do a stroller rental when we got down there, and we had a great experience with Kingdom Strollers!  They ended up being even cheaper than the hard plastic strollers that the Magic Kingdom will rent out.  And they delivered and picked up from our resort.  And we got a free rain cover and cooler rental.  It was awesome!  Plus, we absolutely loved the stroller.  It had plenty of room, both kids were comfortable, and it was so easy to maneuver.  It was a win for sure!  I don't know at what age LL won't need a stroller at Disney?  Probably the next time we go?  But at 5 years old, she still was not going to tackle walking around the whole park.  She wanted the stroller for sure! 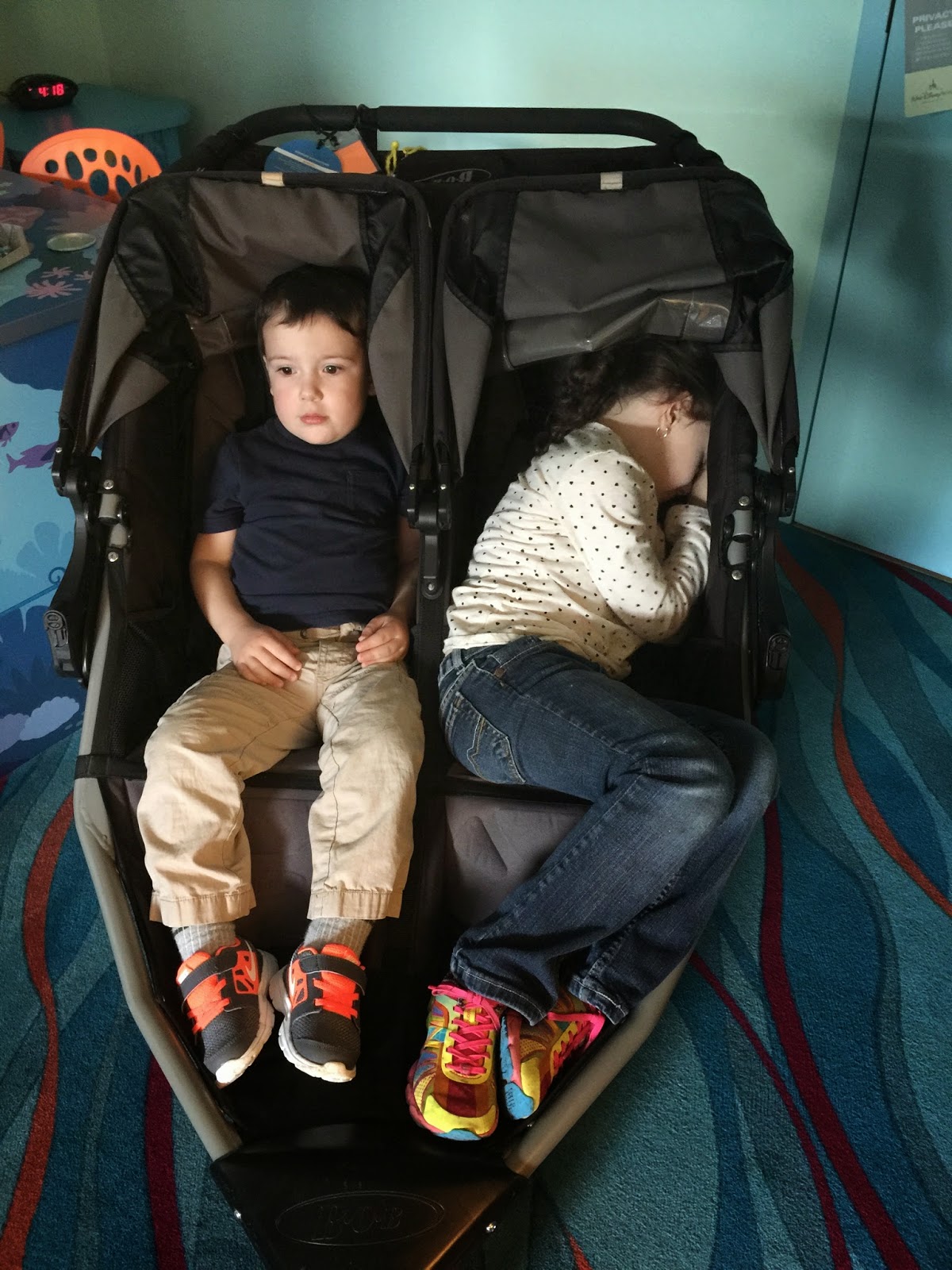 After we picked up the stroller rental, we headed to dinner (we just ate at the resort) and then we came back for an early bed time.  The kids were planning on sharing a bed, and they have never done that before.  They were already tired from a long day, and I knew that they would be sharing a bed, so we started bed time early.  They both did fantastic and were asleep in no time. 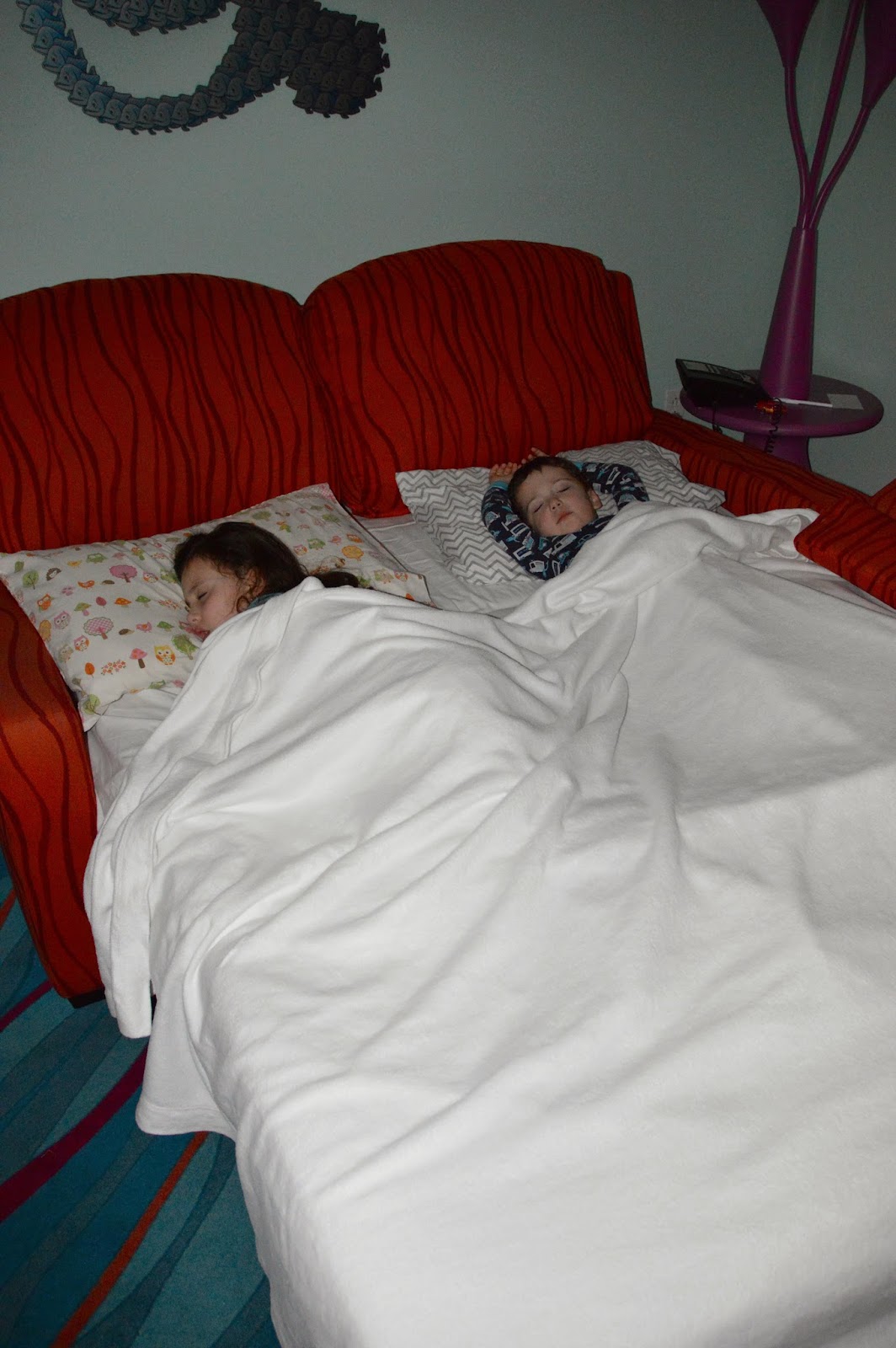 Up next: our first day at the Magic Kingdom!