When I woke up Sunday morning I woke up feeling a little better.  I still wasn't completely back to normal, but I felt like I could try and have as "normal" of a day as possible.  We had to check out of the condo by 12, so Matt and I decided to go ahead a leave early, take the kids to the Alligator Farm, eat lunch there, and then get on the road to head home.

We had been talking to LL about the Alligator Farm for a few weeks and even showed her some videos on youtube.  She was so excited to go!  Matt's Aunt Judi gave LL this little new testament Bible at the beginning of November and she has been obsessed with it ever since.  She seriously carries it everywhere with her (is there a better thing to carry around with you non-stop??).  I'll have to admit - it does make for some pretty funny looking pictures, though.  :) 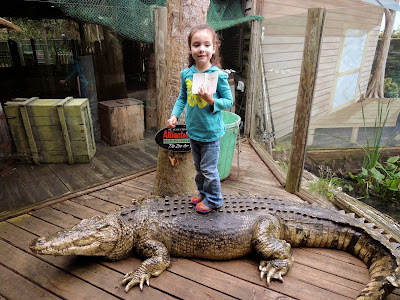 Ready to go see all the alligators! 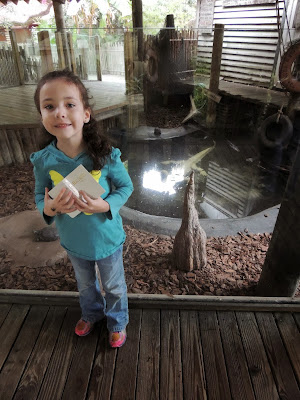 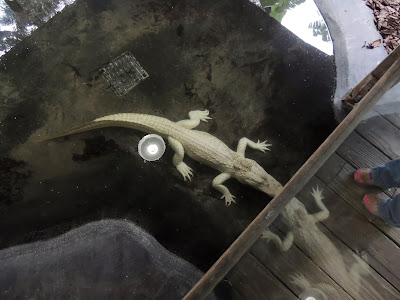 Cooper was as interested as a one year old can be - haha. 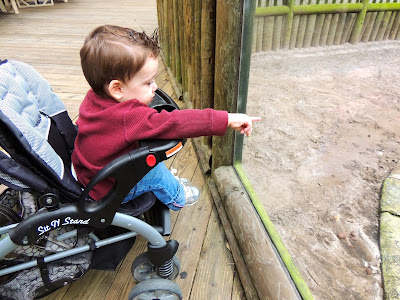 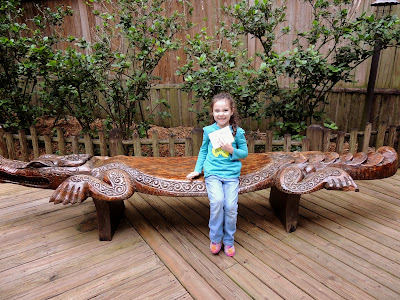 A mummified baby alligator?!  Who knows why the egyptians would have done that?! 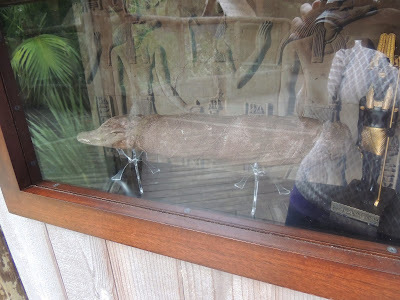 They also (randomly) had a really large bird exhibit (and some exhibits with monkeys and stuff, too). 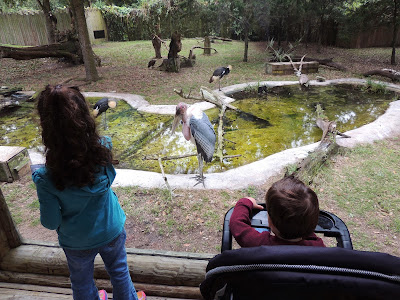 Did you know that this is what a stork looks like?!  I had no idea!  They're for sure not a cute bird like the ones that bring babies.  This thing is gross!  And that sack on his chest fills up with air.  Yuck. 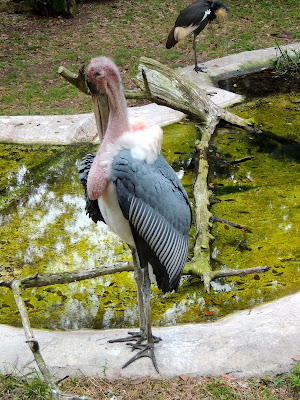 There are hundreds of alligators everywhere!! 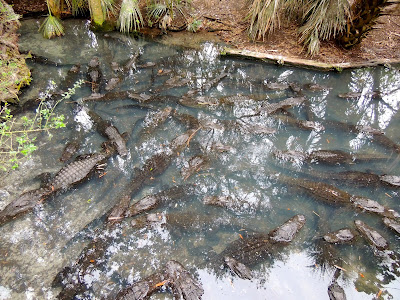 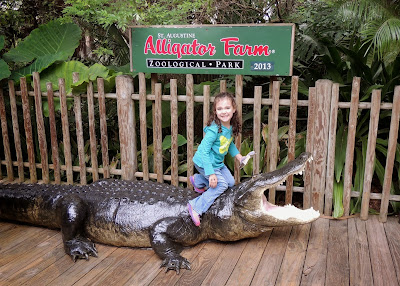 He was not too impressed - haha. 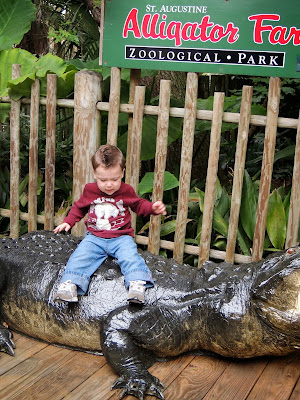 They have some shows throughout the day, and we ended up being the only ones at this one.  Score! 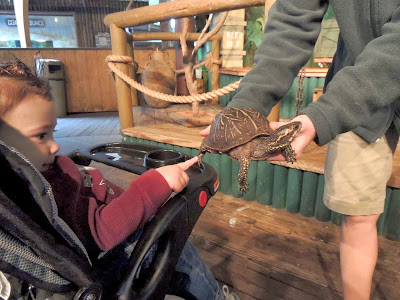 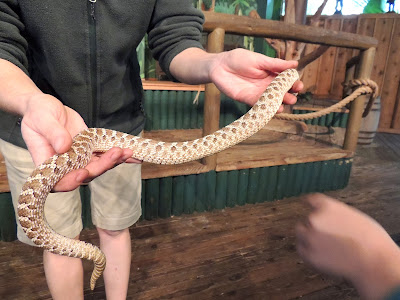 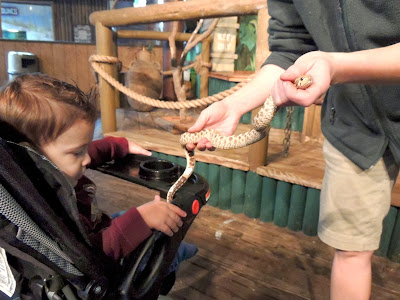 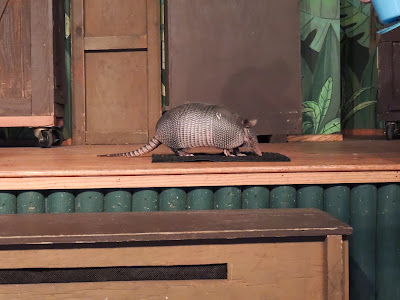 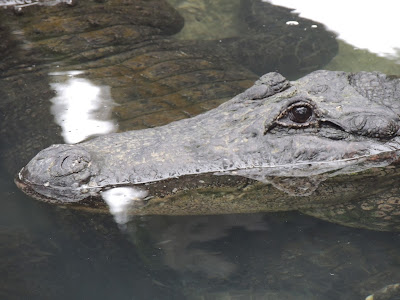 We stopped at the playground for a little while so that I could rest and the kids could blow off some energy. 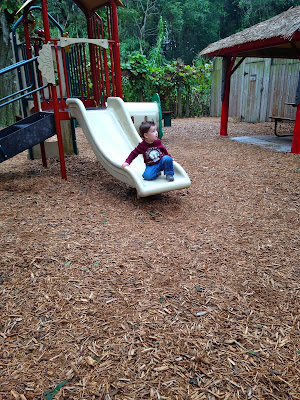 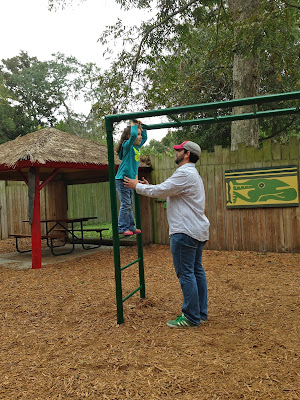 I didn't realize until after I took this picture how pretty gruesome it is??  I mean - awesome to have my kids over a dead zebra. 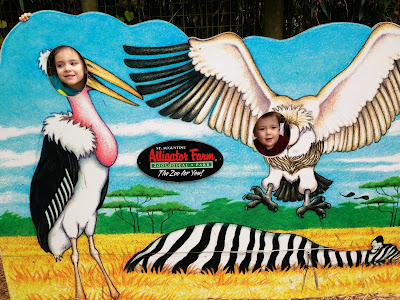 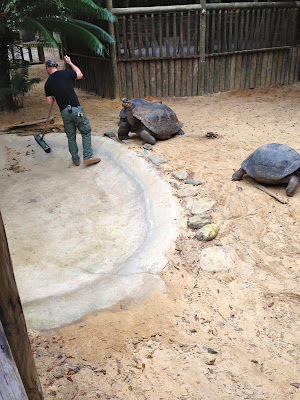 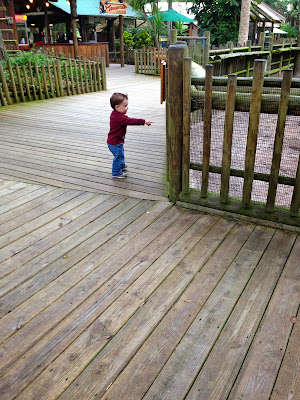 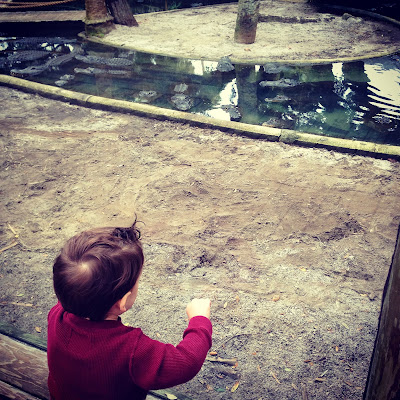 For my spring break in 2006, Matt and I came to St. Augustine (and the Alligator Farm) on vacation.  We took this picture, and it's been in our bathroom ever since (random - I know.  But we have several pictures in our bathroom). 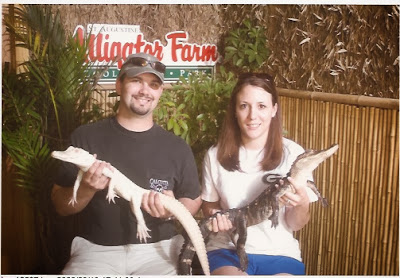 It was so neat to take this same picture again, but this time as a family of 4!  My how things have changed in 7 years. 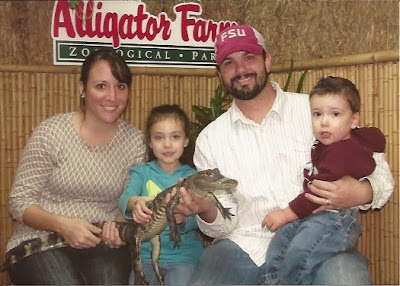 1. love your top
2. omg that zebra picture made me LAUGH out LOUD hahahahahah
3. So funny how LL and Britt both carry around the little bibles like that ;)