Cooper's Trip to the ER

After we ate dinner on Christmas Eve, we put both kids straight in the bath tub.  While Coop was in there, I noticed he was coughing some (which I hadn't heard all day).  By the time he got out of the tub and I was getting him dressed, it was already getting way worse.  After we got him dressed, we tried to give him a breathing treatment to see if it would help at all.  While we were giving the breathing treatment, he got super upset.  When he got upset, he started sounding terrible.  It was the same exact sound that he had last year when we had to take him to the ER for croup.  I knew instantly that he had croup again.  And, just like last time, it came out of nowhere without any warning at all.

Because it was Christmas Eve, we had a big decision to make (and fast).  All of the doctor's offices would be closed the next day.  His croup was already escalating quickly, and would probably get worse through the night.  Do we go ahead and take him somewhere?  Do we wait?    I knew it was going to be another 36 hours before we had the option of taking him to a normal, non-emergency doctor.  I also knew that there was no way that we would probably be able to wait that long.  Knowing how his croup went last time, and how quickly it was already escalating, I knew we wouldn't make it that long.  It was only 6:00, so I started looking online and calling around to see if any walk-in clinics would be open (most around here close at 7 or 7:30).  Thanks to Christmas Eve, they were all closed.    That meant we would have to take him to the ER again.  It basically came down to 1- take him to the ER right then and nip it in the bud,  2- wait and potentially have to make the trip to the ER in the middle of the night like last time,  or 3- just wait and see what happens and run the risk of spending several hours on Christmas Day in the ER.

Because LL is also a part of this equation (and we still wanted Christmas to be great for everyone!), we decided to go with option 1.  We ended up leaving Matt with LL to finish our Christmas Eve traditions, and my mom rode with me to take Cooper.  We got to the ER right at 7 (Cooper's bed time!), but thankfully there was no one else in the waiting room. 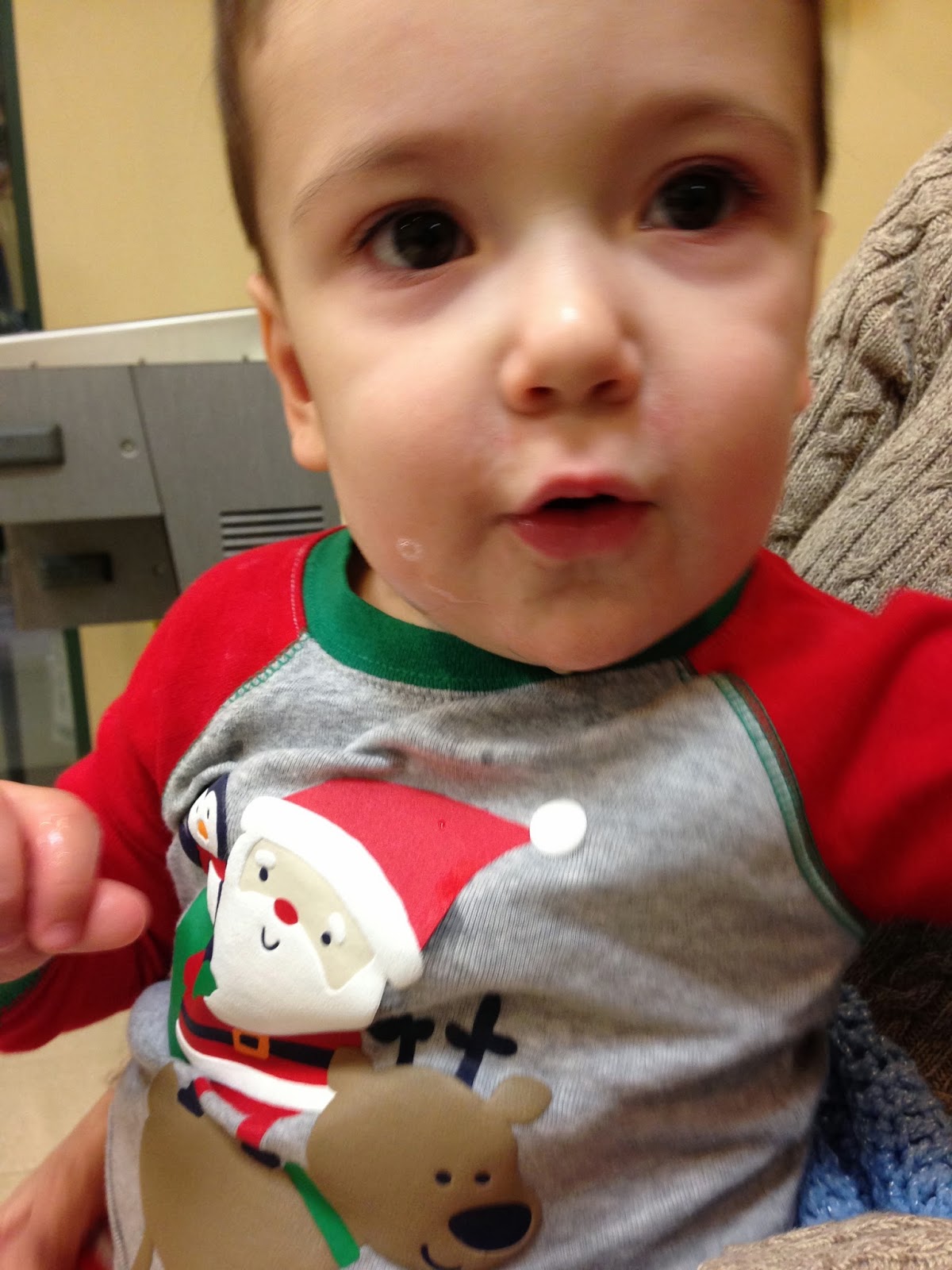 Even though it was bed time and he didn't feel too great, little man was in a terrific mood!  We are blessed with such a happy boy! 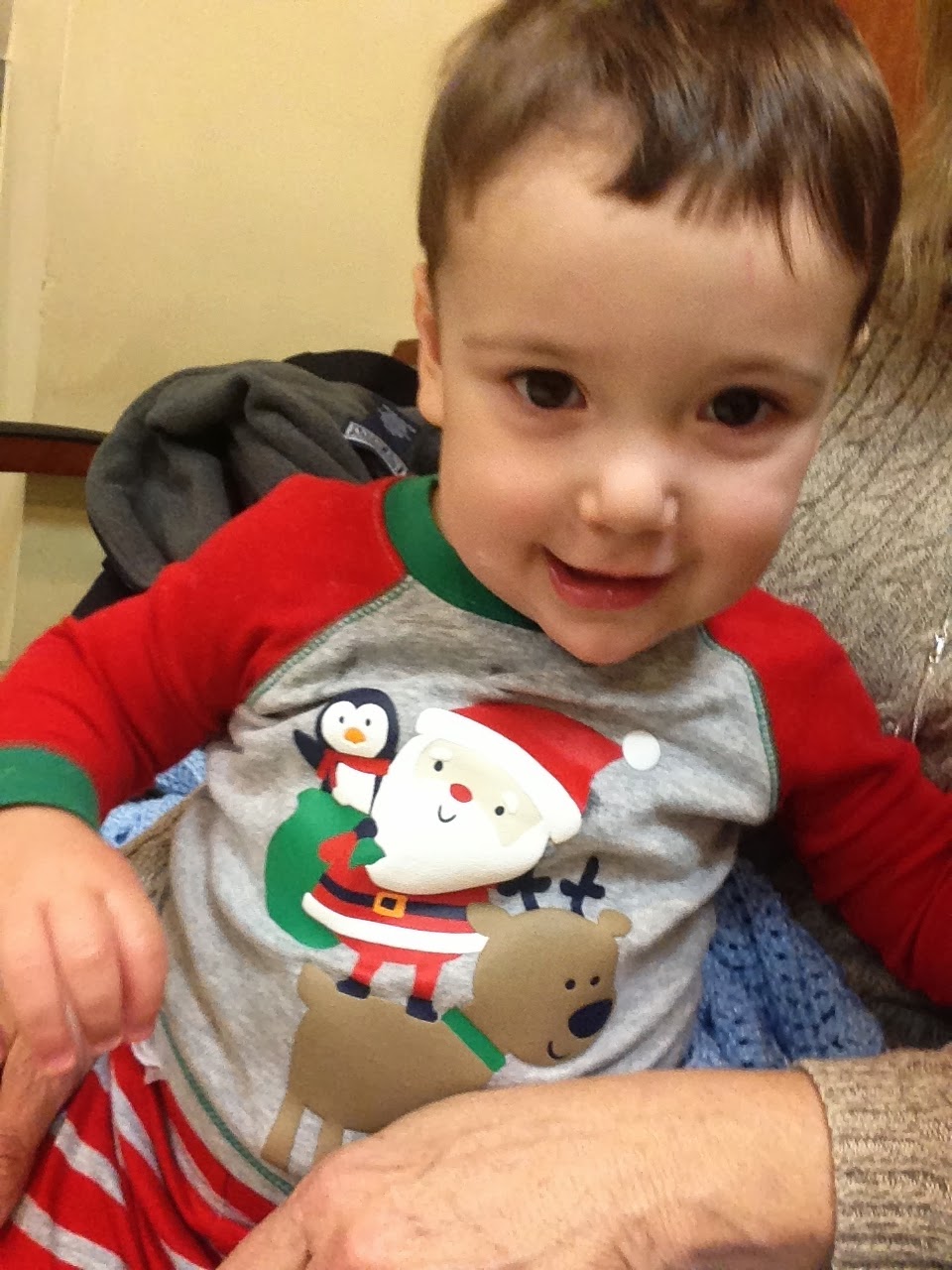 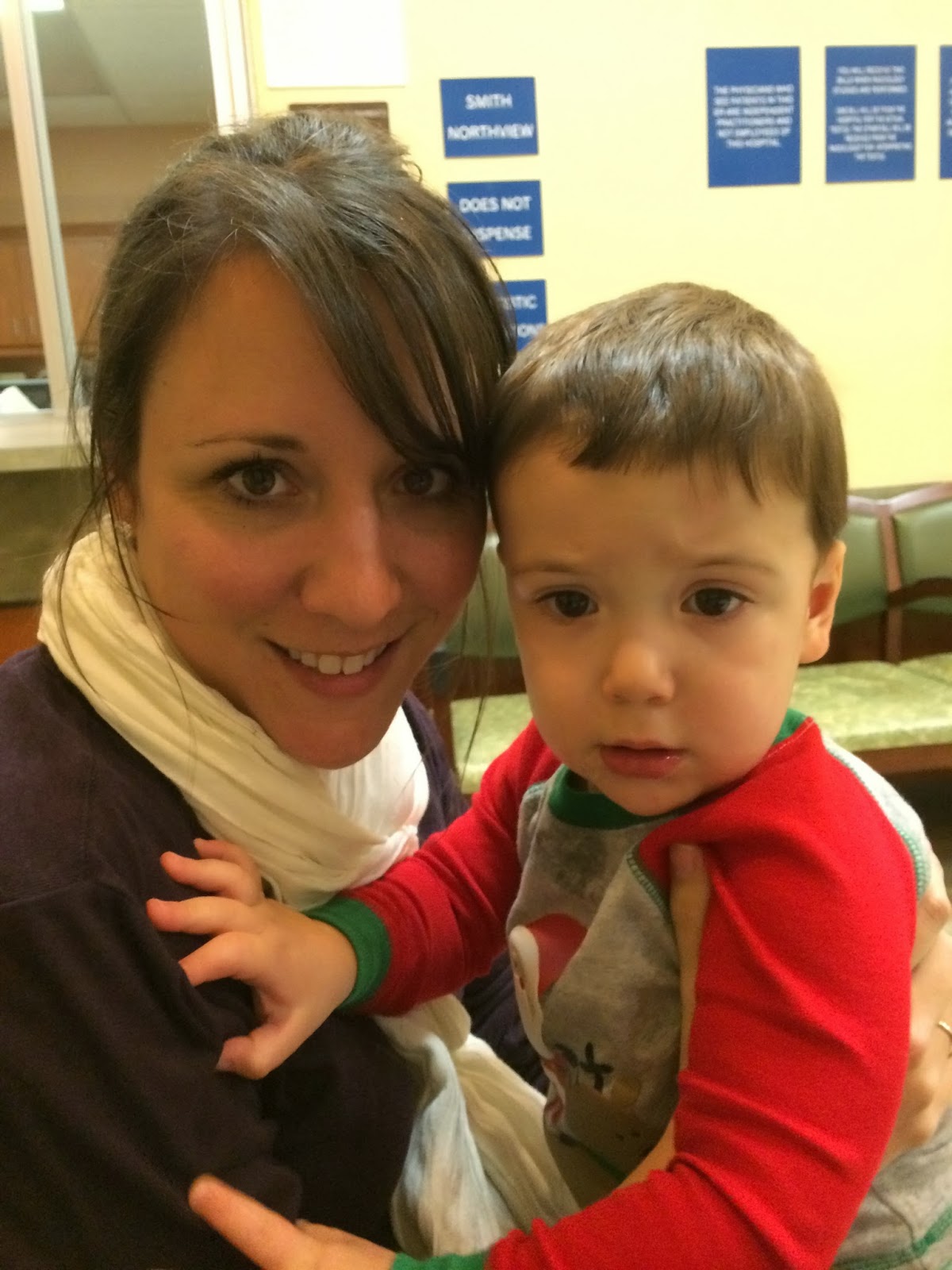 We got back to triage after about 20 minutes where they took all of his vitals.  Even the nurse in triage said it sounded exactly like croup.  By the time we got to the hospital, Cooper was sounding terrible, so I knew we had made the right decision to go ahead and come.  We got put in a room, and both an RN and the doctor came to check him out.  They both said croup, and that he would need an oral steroid and a breathing treatment (not the kind we gave him at home, which actually wouldn't have helped croup at all).  The oral steroid was pretty gross, so they gave him a  popsicle to help out.  He was making the most hilarious faces while eating the popsicle, that I couldn't resist taking some pictures and a video. 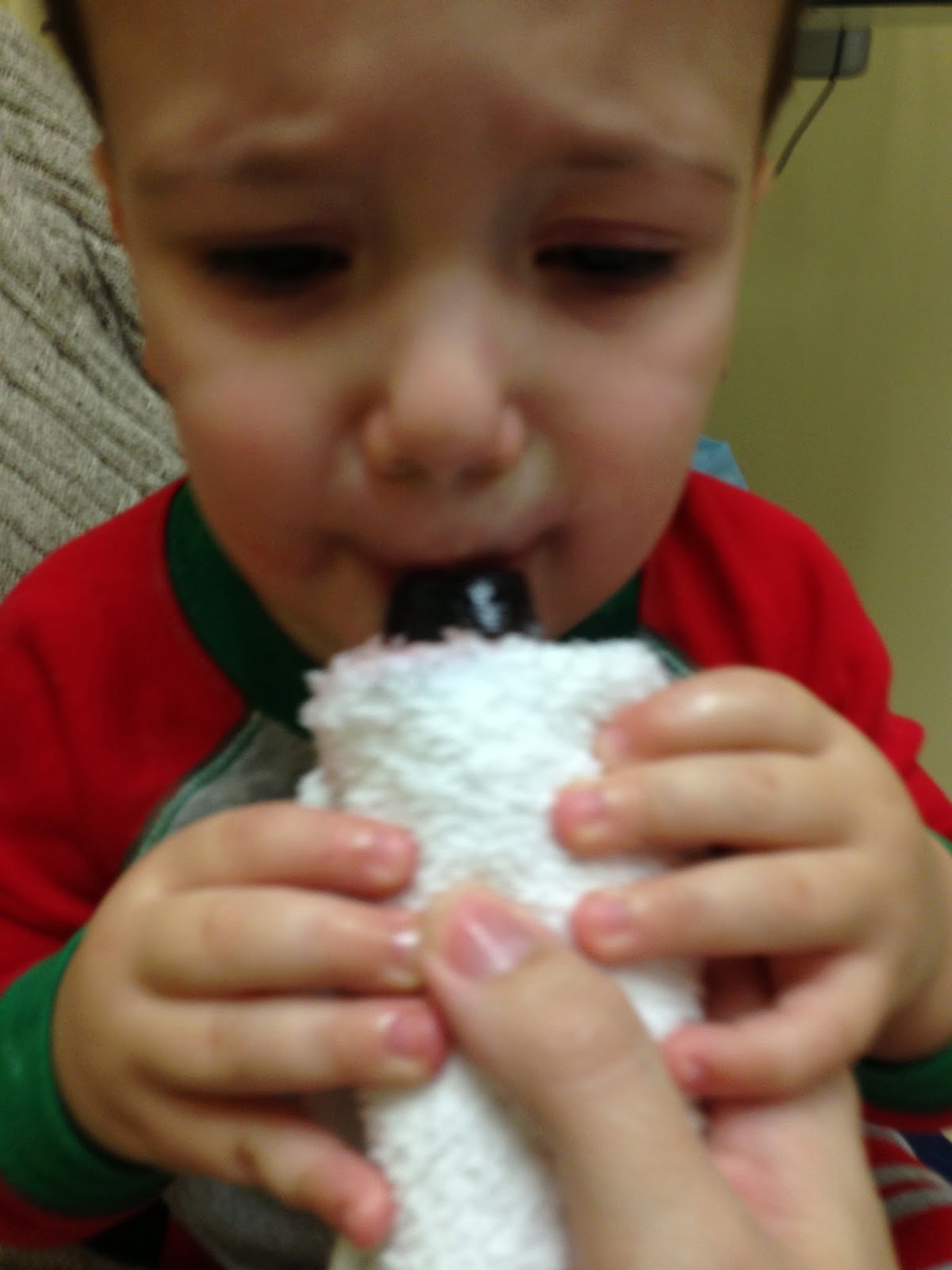 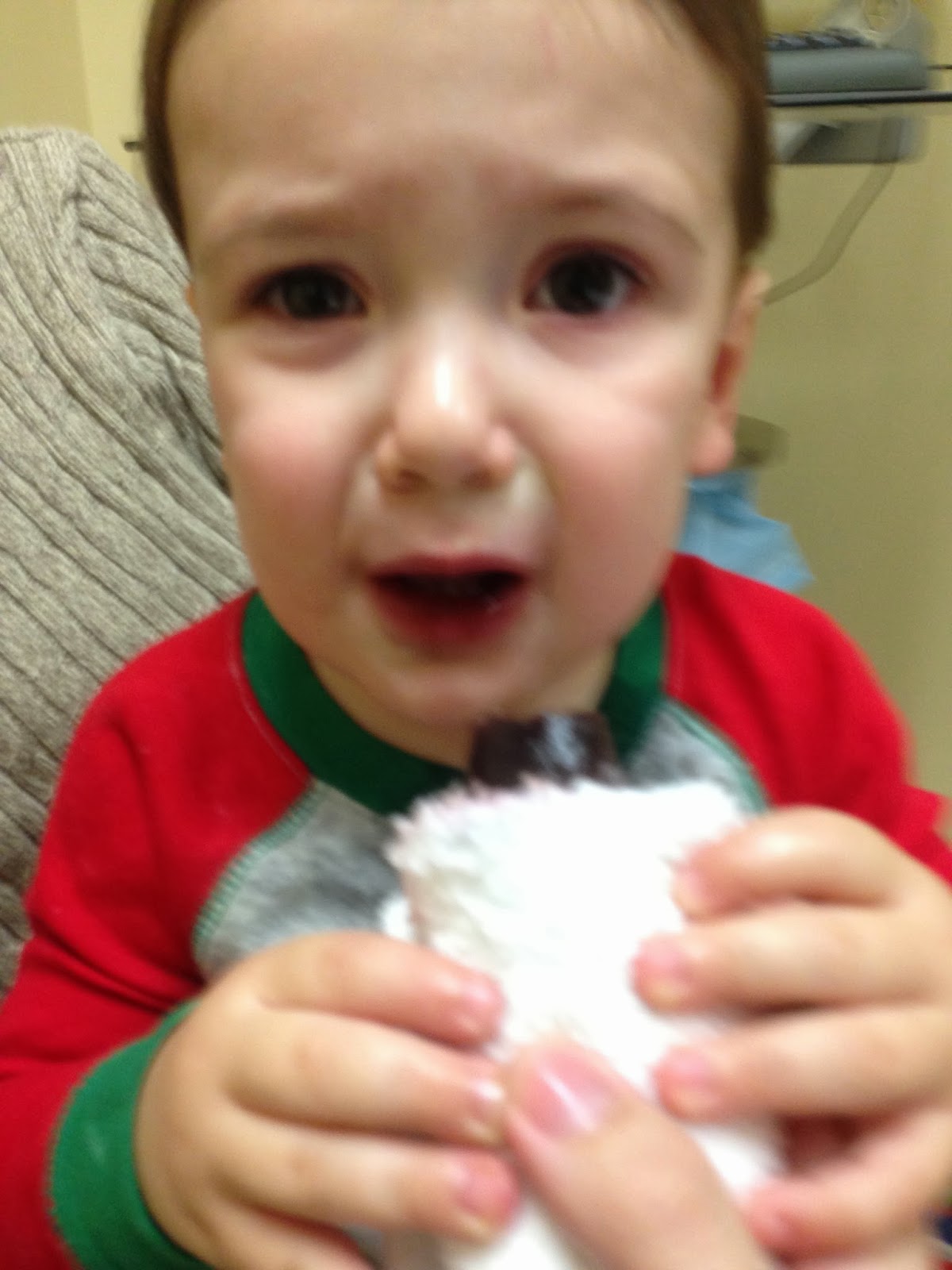 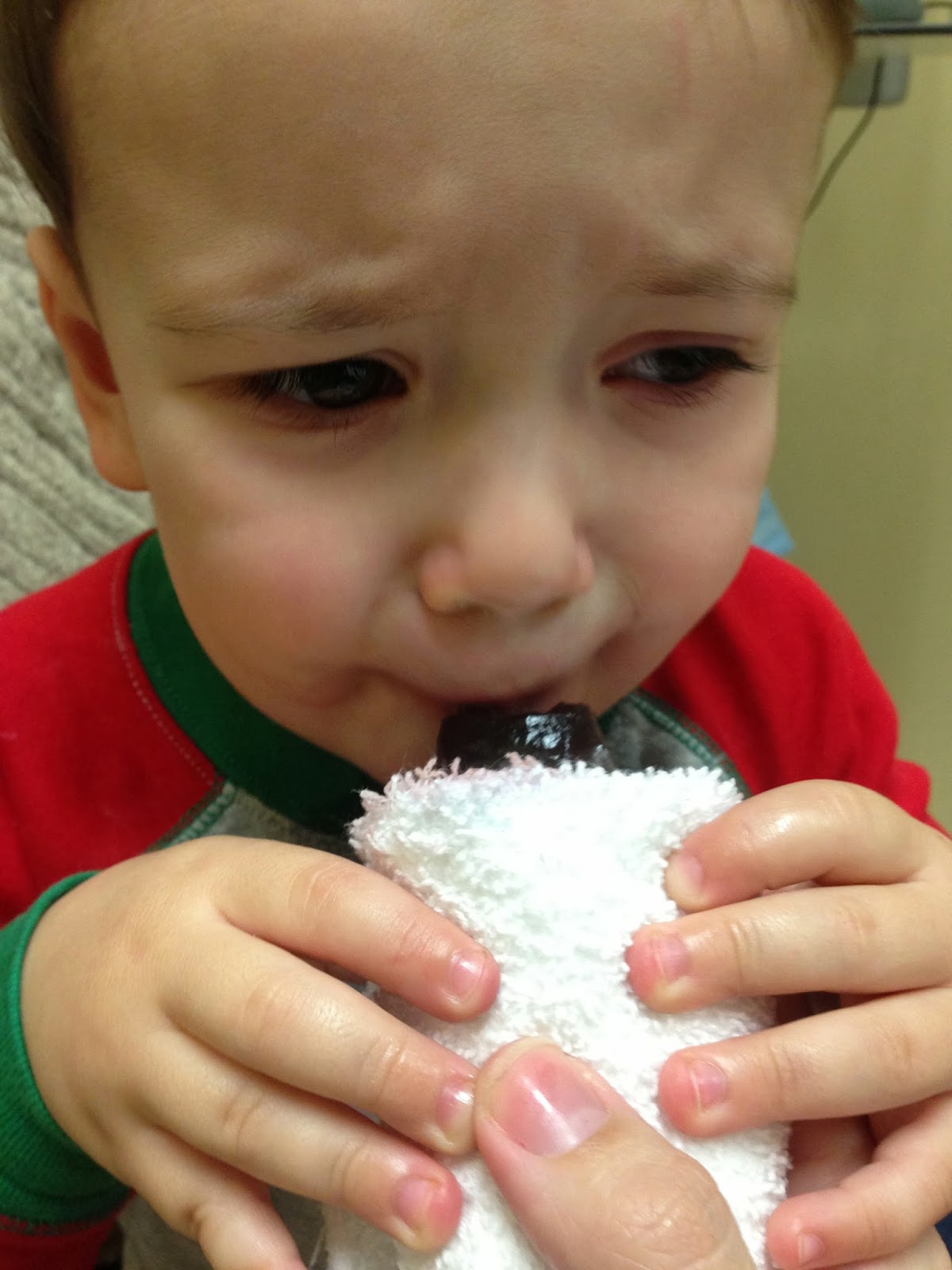 They came to give him his breathing treatment (not fun!), and then we had to wait a while to make sure that it helped and that he wouldn't need another one.  It was about 8:30 at this point, and Gigi and I were pretty tired of entertaining a very active little boy who wasn't feeling great, was super tired, and couldn't play in the hospital room. 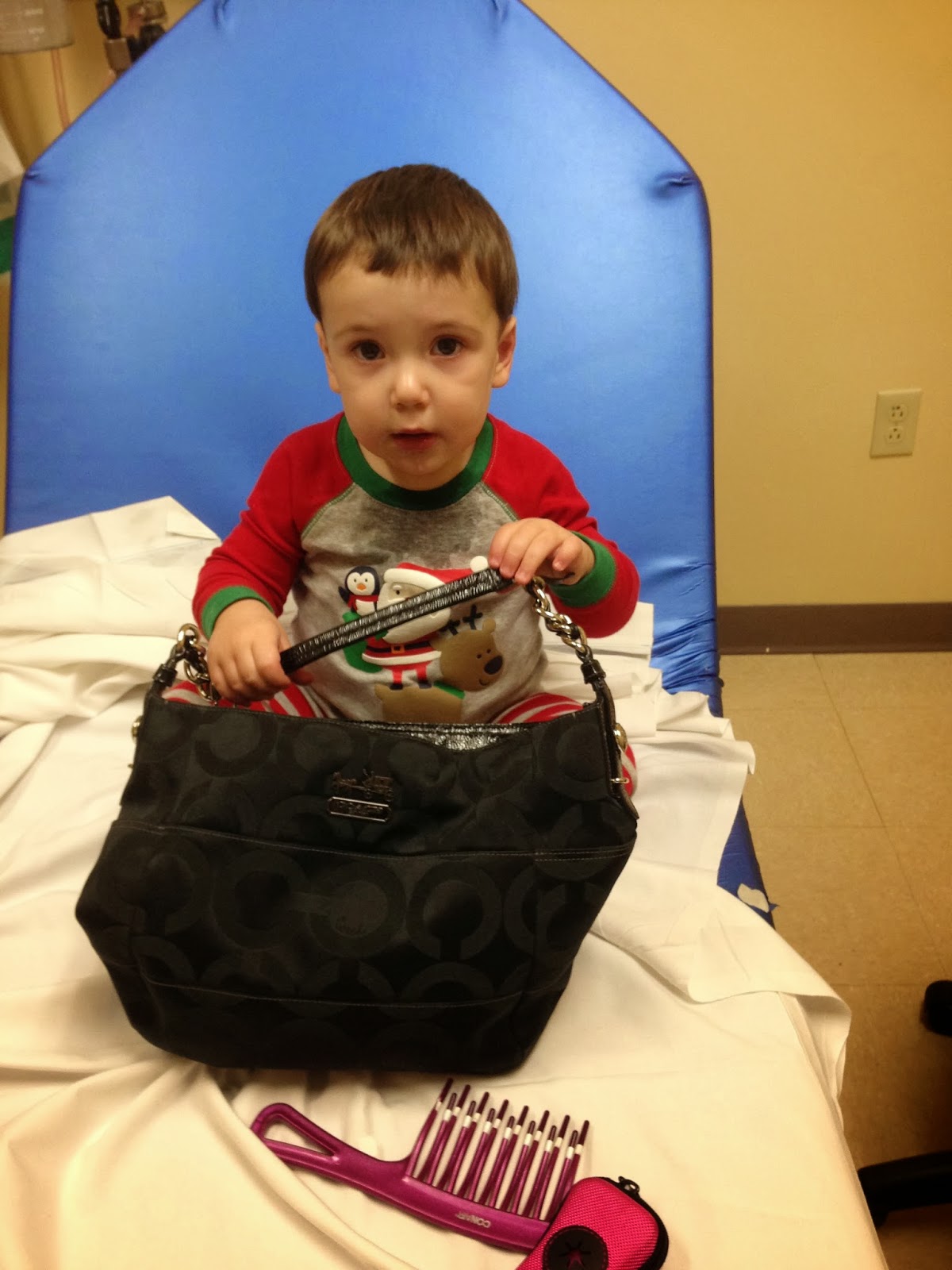 The doctor finally came to check him again about 9:15 and said that he was sounding better.  Then he dropped a bomb, would would have to stay another 3 hours for him to observe Cooper to make sure that he didn't rebound after the oral steroid.  My jaw literally hit the floor.  I seriously asked him, "So you're telling me that we have to just stay here?!"  The answer was yes.  By this point, it was almost 9:30 and Cooper was exhausted.  There was also no way that he would lay down in the hospital bed (even with the rails up) and try to go to sleep.  And have I mentioned that we never hold/rock Cooper to sleep?  Nightmare.  We turned off all the lights, pulled the curtain in front of the door, and I just sang to him, held him and rocked back and forth (while standing up!), until he finally went to sleep.  Thank God!  After he was good and out, I laid down in the bed with him and just snuggle him. 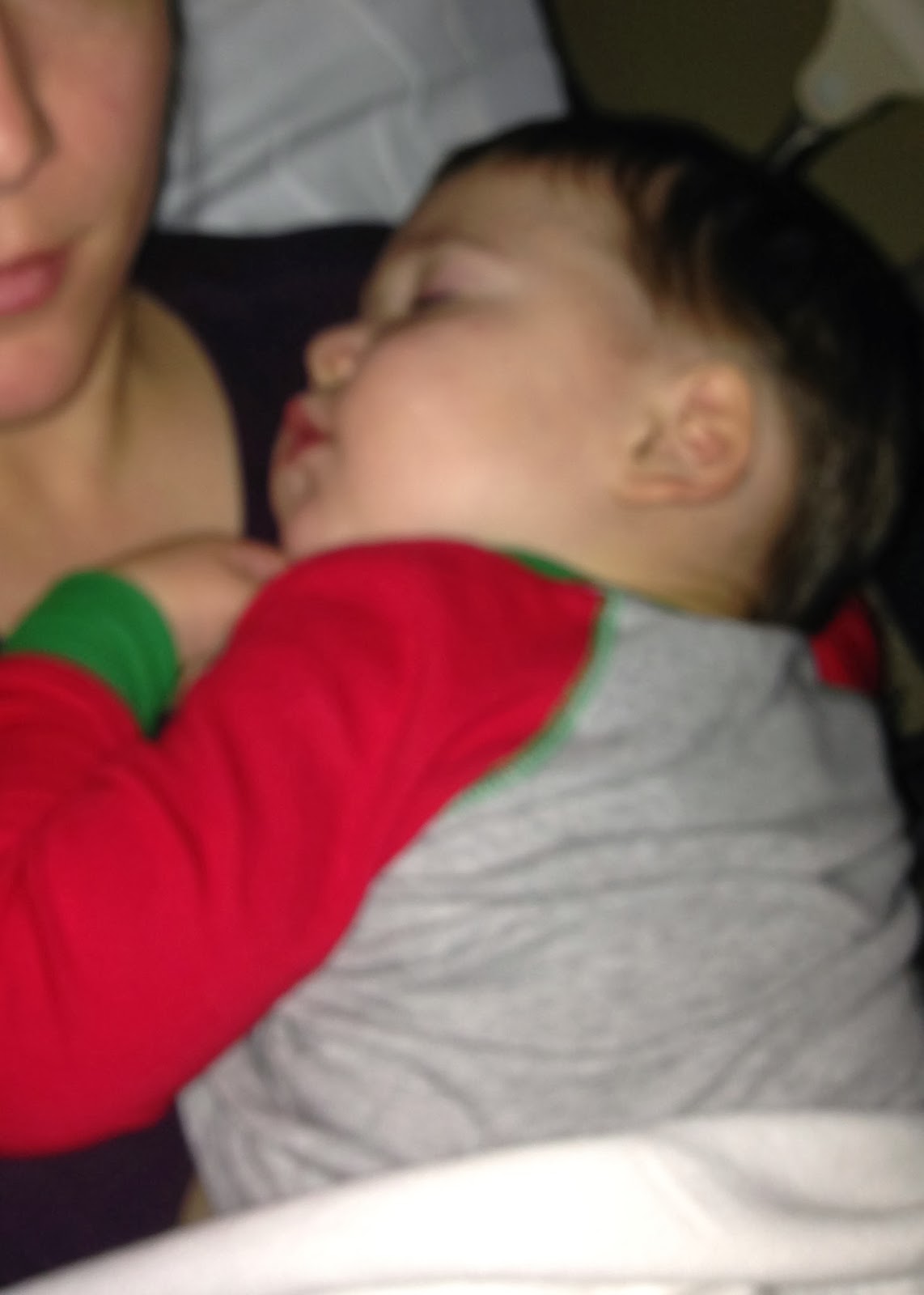 I would like to sit here and complain and say that it was a terrible experience, but it really wasn't.  Snuggling my boy for so long, I really had a chance to think about what Christmas was all about.  My mom and I sat in the dark for 2 hours and (silently) watched A Christmas Story and tried to keep from laughing at each other.  And I knew LL was home and happy and sleeping.  It was just really a great time to reflect on what was truly important.  Thankfully, Cooper was better within a few days (probably because we got him there so super fast), and we didn't have to miss out on any of our Christmas Day celebrations.  I'm just to thankful to have two healthy children and that we have the ability to take them to the doctor whenever we need to.

i had so much of my own craziness going on that day that i didn't get to hear all these details...i cannot believe you had to stay there THREE HOURS!!!! I def think you made the right call though FOR SURE! you would have been so worried all of Christmas about him and instead you got to enjoy it all!