We took Cooper for his 18 month well-baby check-up on January 15 (so he's actually about 18.5 months).  We haven't been to the doctor for a well-baby since October when he was 15 months old. 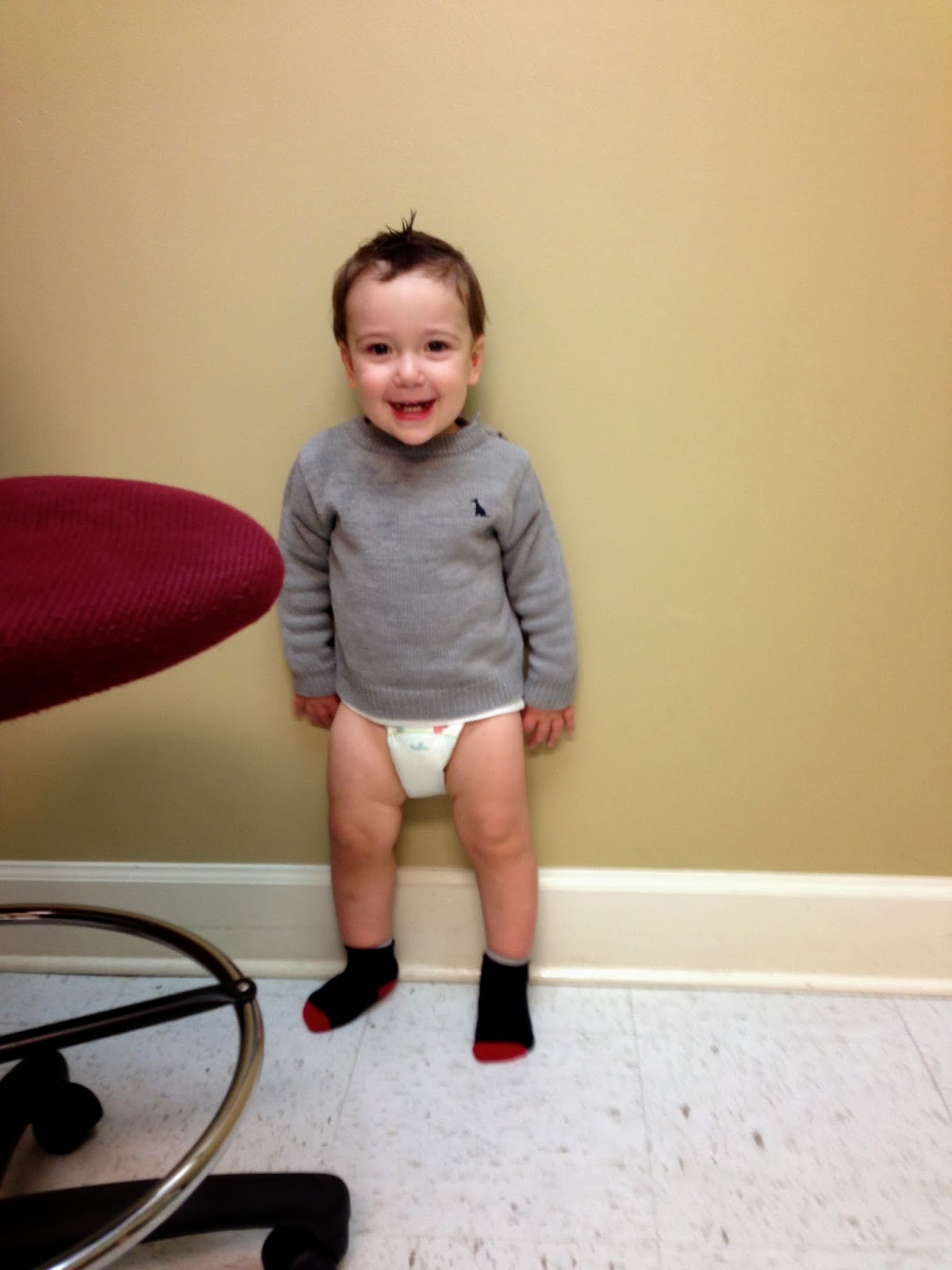 I know I've said this a ton, but this little guy is just so proportional!  I'm so so used to LL who was always waaaay longer than she was wide, but Coop's stats are always just super close.  And, honestly, his weight should be a little less than this.  For the first time, they weighed him with his clothes on.  So the 29 lbs 2 oz was also with a diaper, jeans, a shirt, and a sweater.  The only thing he didn't have on was his shoes.  So I'm thinking it was a good 2 or 3 oz in clothes at least, right??  Oh well.  It's not a huge deal. 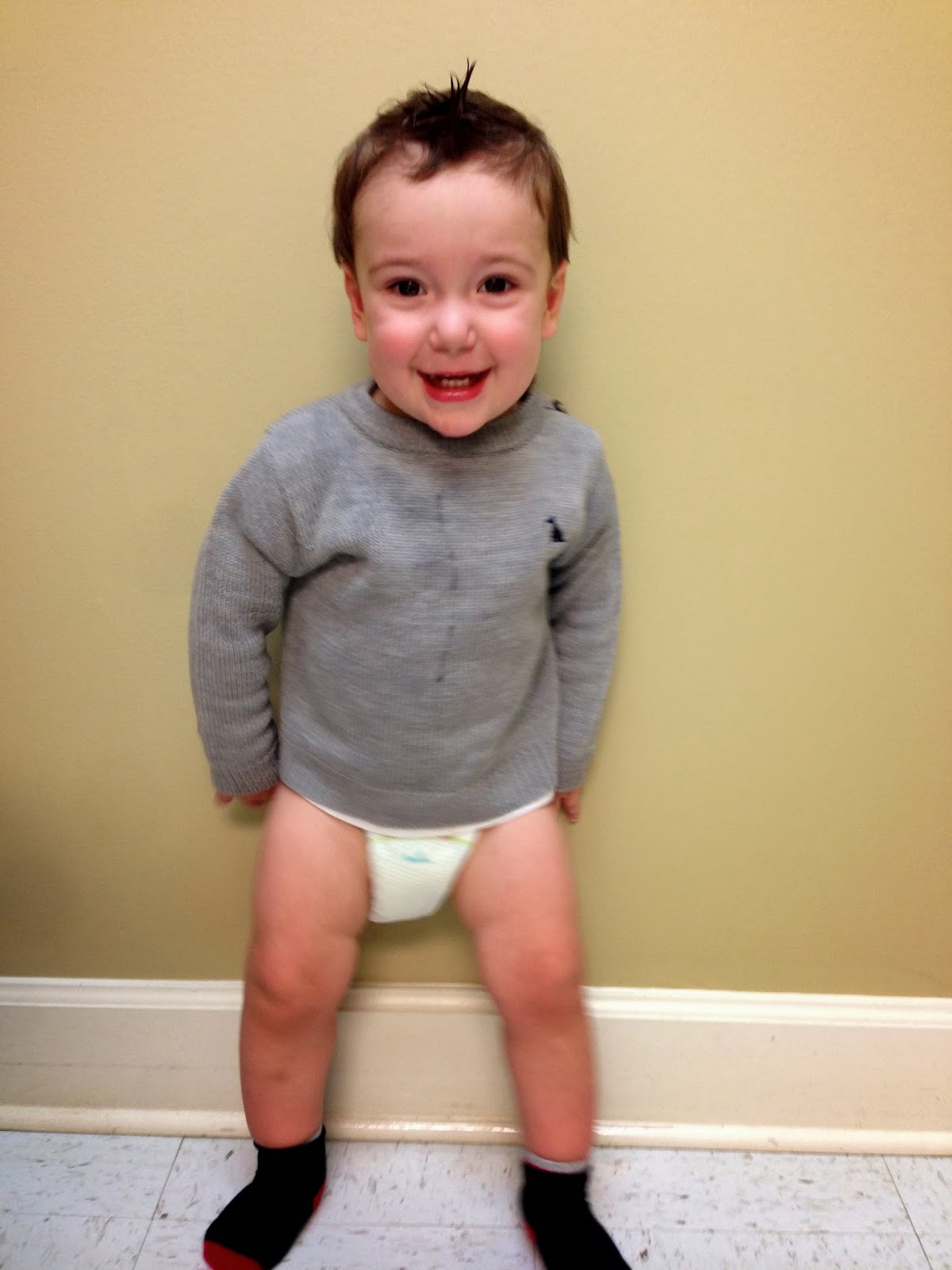 It just shocks me so much that he's so much taller than her.  We always just considered LL to be so tall, so I guess I assumed that our other kid would never be that tall??  I mean, Matt and I aren't tall at all, so I just have always guessed that LL got a gene from both of us that was pretty random.  But I guess Cooper has gotten it, too!  I guess the difference is that he is bigger all around, where as she has always been super petite.  Maybe that made her look taller?  I also think that she has longer legs, where Coop has a longer torso.


Trying to hurt himself, as usual - haha. 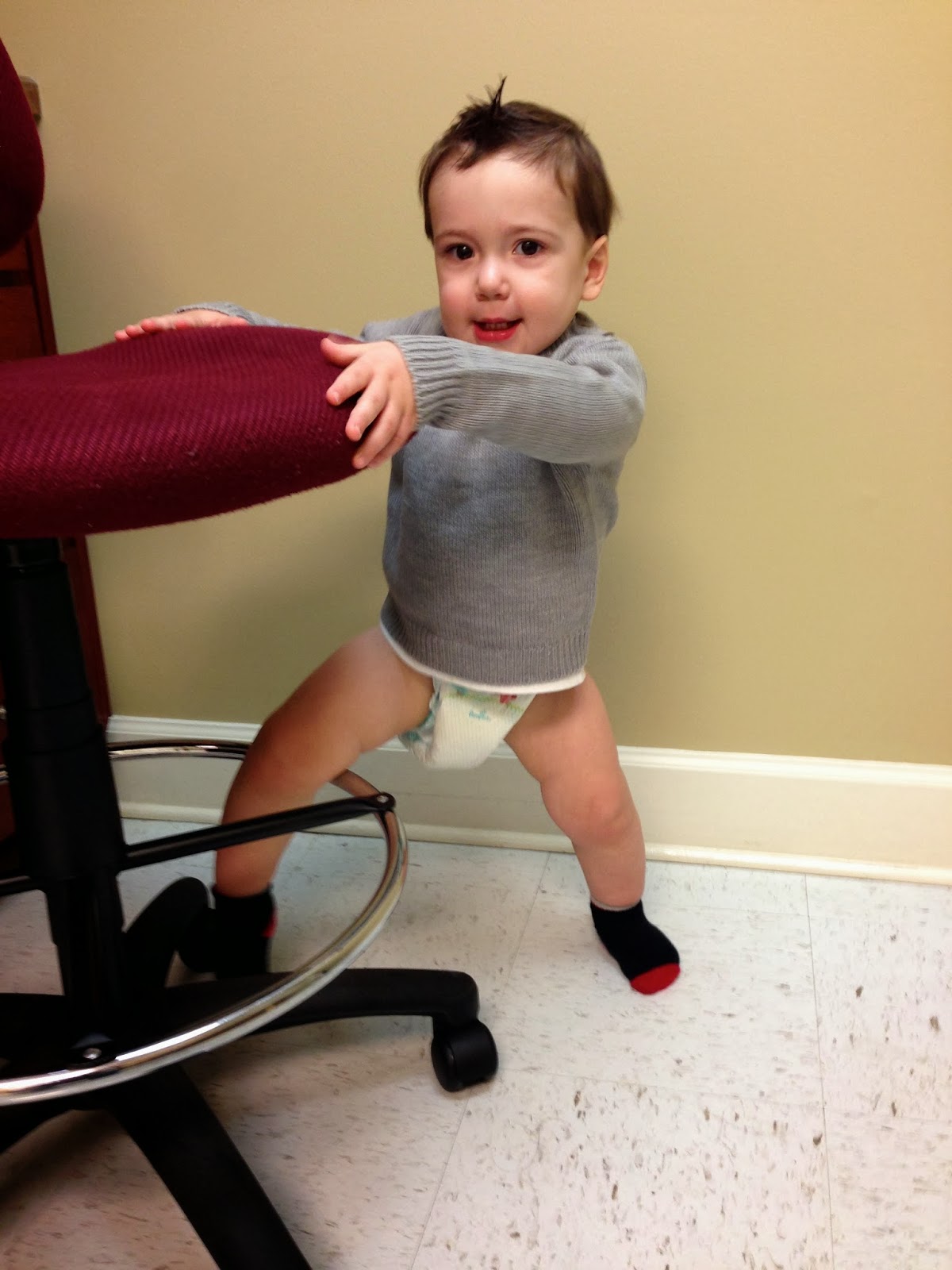 Here are some of the things that we talked about:
-Development.  Dude is doing great.  He's loving some peek-a-boo, using a fork, trying to run, following commands, he points, gets needs met, etc.
-Along the lines of development, we also spent a long time talking to her about his talking.  Cooper is just not a big talker.  At all.  Which isn't too surprising.  He's a second child, and he's a boy.  Kind of two strikes against him.  Then you factor in that I'm a huge talker.  Matt is a huge talker.  LL is a huge talker.  And it's hard for him to get a word in edge wise.  But I still wanted to talk to her to see what she thought about it.  Basically, it's great that he does other things to get his needs met (sign language, points, etc.).  It's also super good that his comprehension is perfect (he can follow directions GREAT).  So the talking could either be because he doesn't mind and it's going to take him longer, or it could be a speech delay.  We really have no idea.  And he DOES talk.  It's just very few words because he tends to say a word for a while, and then just decides he doesn't need to say it anymore.  It is a plus that he is hanging on to his major words, though (Mama, Dada, Yi-yi for Lorelai).  After we left, she called a friend who is a Speech Pathologist and talked to Dr. Blache (we were seeing a different doctor in the practice).  Both of them said that they thought he was fine.  To go from here, we're going to fill out a detailed form from their office about his speech.  Then, we're just going to wait a few months.  I'll have a phone conference with her after he turns 20 months and we'll talk about how he's doing.  If we feel like he's making progress, we'll leave him alone until his 2 year check-up in June/July.  If we still have some concerns, we'll talk about having him formally evaluated.  All in all, it's a win-win.  If he doesn't need help - great.  If he does - he'll get it early.  Now we just need to give him some time and let him do his thing!
-We told her that his reflux has been so much better since we upped his dosage at 15 months.  His spitting up is almost completely gone, and he isn't near as "rattly" anymore.
-We talked about some dryness around his mouth (just due to the cold weather) and some spots on his rear end (looks like yeast - doing some prescription cream for 7 days to see if it clears it up).
-She said that usually the 18 month visit is a pretty rough one, but he did great.  Especially since he just went to the ER with the croup (post to come).  He got one shot and was a stud about it.  He cried for a second, but he was over it before we even made it to the end of the hall. 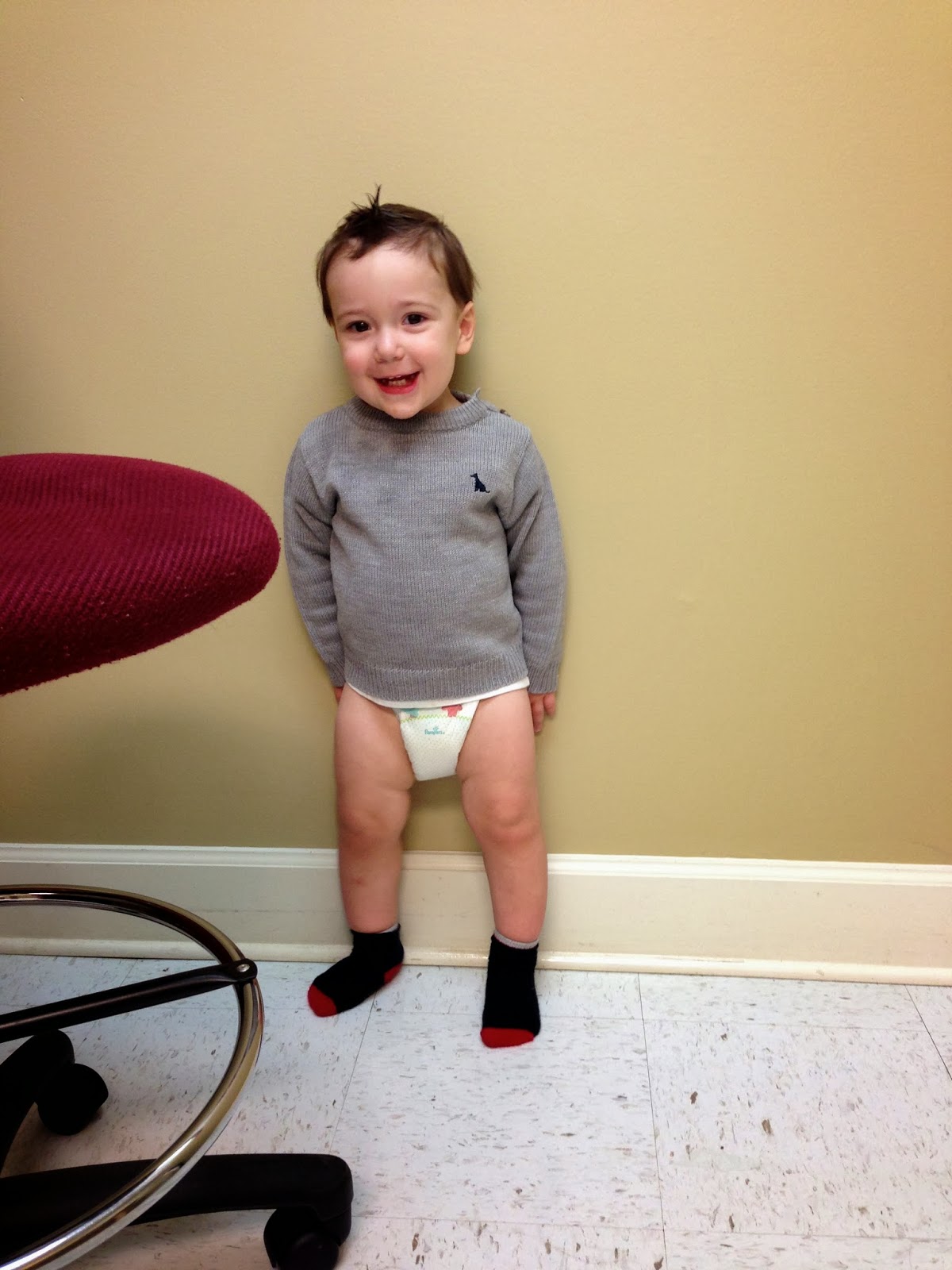 So we'll have our phone conversation in a few months and then go back for his next well-baby this summer!

I know you've been nervous about the speech so it's GREAT to have a plan of action but I totally think he's fine too!!!

I think it's hilarious how our kids are so dang alike. I mean how weird for britt and ll to have same 2 year stats and kye and coop to have similar ones at 18 months?

gah he is looking SO CUTE!