Coming into this summer, I knew one of the things that I wanted to do with LL was a chore chart.  Really, this was for several reasons.
1 - She's plenty old enough to start really participating in keeping this house running.  Don't get me wrong, she's had to do "chores" before now, but it wasn't anything that was structured.  I wanted to make her more intentional about what she was doing.  I really wanted her to stop and think about things that she does around the house.
2- She was gaining too much of a sense of entitlement.  When Cooper was born, our friends and family (including me and Matt!) did a fantastic job of bringing LL little things and making her feel special.  But it didn't really stop when it should have.  We had just gotten to a point where she expected to get something all.  the.  time.  And neither Matt nor I are okay with that.  I come home from work - she would ask for a present.  We would go to the store - she would want to buy something.  We would be just at home and she would ask if we could go get a toy.  Not okay.  And she really wasn't appreciating the things that she was getting.  She'd get a toy and immediately ask for another one.  We needed to stop this BIG time.

The first thing I did was talk to LL about he chore chart.  And she was SUPER receptive to it.  Then, I explained to her that she would be getting NO "prizes" until the chart was filled up.  After that, I talked to all of the grandparents and explained this to them, too, and said absolutely no presents for her at all!!

Then it came time to make the chore chart.  I just bought some small sized poster boards, divided it up into a grid, and wrote the chores on the side.  LL had 8 chores on her chart.  Here's what they were:
1- Make bed
2- Brush teeth
3- Put dirty clothes in hamper
4- Put shoes in closet
5- Put plate on counter (after eating)
6- Putting the silverware away (when the dishwasher was clean - completely new chore for her)
7- Put toys away
8- Feed Uh-Oh

I also printed out pictures of her chores and put them next to the description.  That way, she was able to look at it and see what things she needed to do.

Obviously, lots of these chores she already has been doing, like making her bed, brushing her teeth, cleaning up her toys, etc.  But I did want to start out with things that she was familiar with so that it wouldn't be so overwhelming.  And, again, I wanted to make her brain think about things more intentionally.  We also added some completely new chores on there - like putting the silverware away. This actually turned out to be one that she LOVED!  I would let her know when the dishwasher was clean, take out all of the sharp knives, and let her go for it!  She had to figure out herself between the big spoons/forks and little spoons/forks, baby utensils, etc.

So she had 8 chores and 10 days - making a total of 80 STICKERS for her to be able to complete her chart.  That's no joke!  It ended up taking us about 3 1/2 weeks to complete (if she would spend the night, we were out of the house for the day, etc.)

The whole time we worked on the chart, LL talked about how she wanted a "Sophia Dress-Up" (meaning a princess dress like Sophia the First).  We even took her to Target the week before she finished her chart to show her that it DID exist and give her more of a realistic goal of what she was working towards.  She also did GREAT that day in Target with not leaving with the dress-up then AND with not asking for anything else while we were there.  Any time in this whole process that she would ask for something I would just remind her that she had to finish her chore chart first and she was totally okay with that answer.


Putting on her last sticker!! 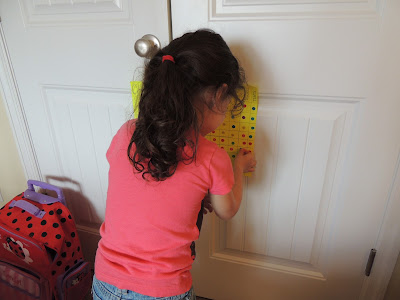 She was SO PROUD of herself! 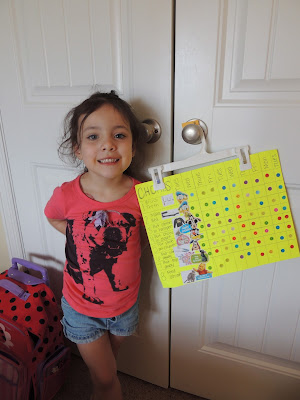 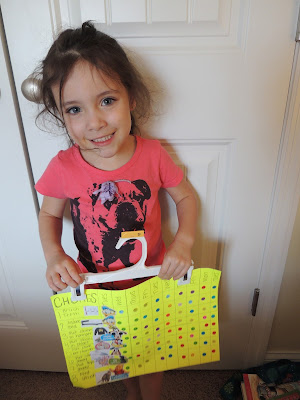 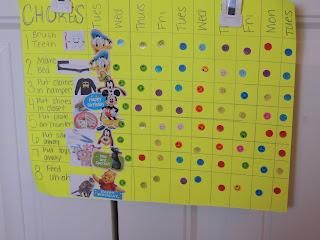 She FINALLY got her Sophia Dress-Up!! 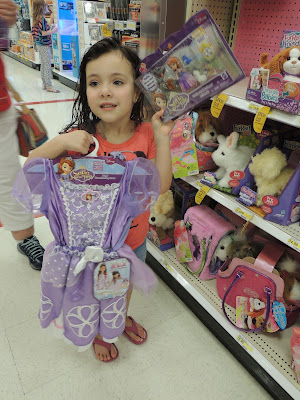 This was also a big deal that she picked this because she does NOT like to dress up.  Ever.  We went out to dinner after this, and she asked to wear her dress inside.  FIRST TIME!!  Yay!!! 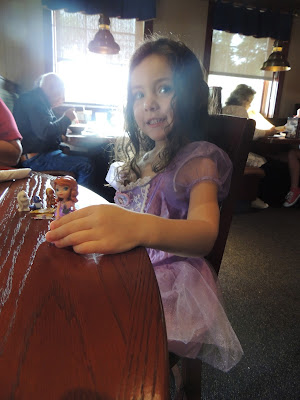 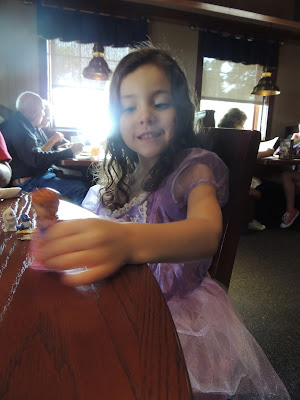 We're working on our second chore chart now, and we've changed up the chores that are on it.  We will not be doing a chore chart all the time, but I think that it was a good stepping stone in getting her  into a better routine with the chores around our house!

Great idea to get her back on track and out of the "i want it" phase! I totally know what you mean...I appreciate SO MUCH mrs charlotte stepping up with Kye but it can be too much at times and does cause problems!!! I think this was a GREAT solution for sure!

Question: she doesn't brush her OWN teeth right? I was shocked when i read somewhere that they shouldn't brush their own teeth unsupervised until age NINE! Isn't that nuts???

Our newest stuff we have kye do is take his clothes to the dirty laundry, dress himself, wipe himself (we check..I read age 6 is when he should be able to wipe his own butt FINALLYYYYYYY), and we're starting to work on chewing with his mouth closed! May be good ideas for the next chart ;)

She does brush her own teeth first, but then we'll brush them after her. Or sometimes it's the other way around. But, yes! We do still brush them!

Getting herself dressed (and undressed) is on her newest chore chart and she HATES them! ?? But she needs to know how and she is plenty old enough! It may take us a WHILE to get the chore chart filled with those two on there - haha.