When I blogged about Cooper's 6 month photo shoot, I mentioned that we tried to mimic LL's 5.5 month shoot as closely as possible. I also said I would do another post about it - well - here it is!

It is so funny to look at the pictures for me.  First, because it's so neat to see how my children look SO ALIKE in some ways and so different in others.  It's like sometimes I think they are so similar, and then sometimes I think they look like completely different babies.  That's even represented in these pictures.  Secondly, because you can see so much of their personalities (and how they're different in these pictures).  LL is a CHARACTER in these pictures - which was foreshadowing then because she is certainly a character now.  In Cooper's pictures, you can see that he is more subdued, more laid back, and not as "crazy" with his expressions - which is totally how he is all the time.  He is a suuuuuper go-with-the-flow baby, and I LOVE that about him!!

For all of these pictures, LL is on the left and Cooper is on the right (duh).  Also, you can click on any of the pictures to see them bigger. 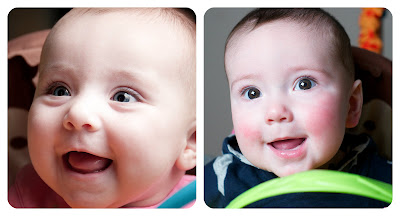 I think Cooper has a stronger chin, for sure!  And he definitely has more hair!  I also think his face might be a little longer (and not quite as round) as LL's.  That comes from his Mommy.  :)  They both FOR SURE have that cute, little Mullican nose! 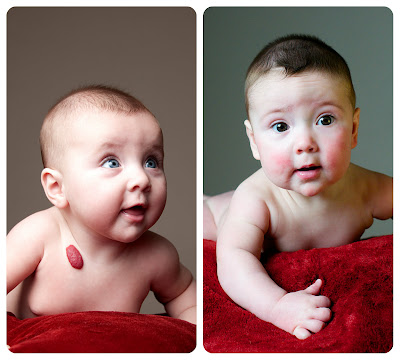 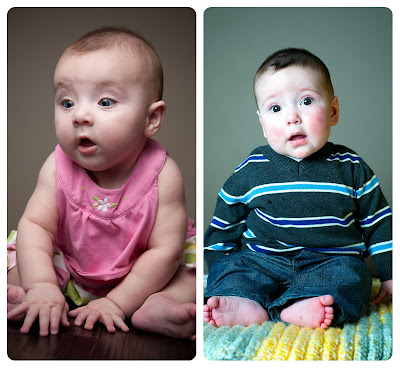 We actually have this picture of LL blown up into a large canvas in our living room.  We wanted a comparison picture of Cooper, and I think this one is it.

So, what do you think?  Do they look alike or completely different?

overall...i think they look very different! i know coop looks a lot like matt but honestly seeing him compared to lorelai i see SO MUCH of YOU in him!!!!!!!

I think the one of them sitting up looks for sure alike!!

I LOVE that last pic of LL!!