Let's just state one thing first before I get started - how in the heck am I old enough to be going to my 10 year high school reunion??  I seriously feel like we just graduated only 4 or 5 years ago!  Time - please slow down.

Our reunion spanned over two days.  Friday night was a tour of the school and the football game.  I know that a tour sounds funny, but our high school has changed a TON in the past 10 years.  To the point where a lot of it doesn't even look the same.  The tour was at 5:00, but Matt and I were running a few minutes late.  Meghan texted me on the way there (because she got there on time - haha) and I was trying to tell here why we were late when autocorrect stepped in...

After the tour, we went to dinner with Meghan and Kevin (just to Chik-Fil-A - nothing exciting), and then we headed to pick LL up for the football game.  We took LL to a Viking game last year, and she LOVED it.  Meghan's family had some extra season tickets that weren't being used for this game, so we just sat with her family instead of the reunion group - which was totally fine with me!  This year was no different for LL - she loved the game!

Saturday morning they had a picnic at a local park for families to come to, but it was right in the middle of a nap time for Cooper, so we just opted out.  I tried to think of different ways that we could make it work, but none of them were great options.  Sometimes a baby's schedule trumps all!

Saturday evening there was a get together at a local hotel, which we did go to.  Matt and I were a little early (trying to make up for the night before - haha), and we actually had a little TOO much time to kill.  We headed over to La Berry for a little snack.

A hodge-podge of everything.  :)

After our fro yo, we headed to the reunion.  I'll admit, it was a little awkward, but we still did have a great time.


Mallory and I have been friends since Kidergarten!

Erin and I have been friends since preschool! 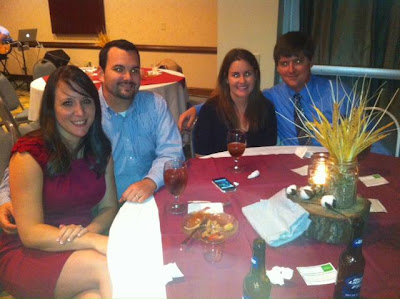 Overall we had a good weekend!  Can I go back to pretending that I'm not this old now?

At least you had a reunion!!! I was on the planning committee of ours and we couldn't get people to send in their dues. Such a shame :(