With both of my babies, I have swaddled them for the first several months of their life.  With LL, we actually swaddled her until she was about 5 1/2 months old.  It was longer than I wanted, but she just would not sleep well without it.  With Cooper, he is still swaddled and will probably continue to be until he is at least 3 1/2 months old.

First, let me explain WHY I swaddle my babies:
1. It helps them feel more secure when they are asleep.  Think about it - they've been in your tummy for 40 weeks (give or take), all bundled up nicely.  It seems pretty reasonable that they would still crave that feeling after they are born.  Swaddling helps them to feel secure while they sleep without having to be held all the time.
2. It helps reduce SIDS.  The "Back to Sleep" campaign started in 1994.  Since then, the instances of SIDS has dropped by more than 50%.  Swaddling helps keep a baby on their back (it's harder to roll), AND it helps them to feel more secure while they're there (thus, sleeping longer and giving parents less of an incentive to put them on their tummies).
3. It helps contain their Moro reflex.  Also known as "startling".  We all know what this is.  A baby will be perfectly content and just hanging out, and then all of a sudden they will jump out of their skin, scaring the bejesus out of themselves.  When they're swaddled, they can't really startle.

I think that it's also easy to see that swaddling is seen as an important thing to do as it is what the nurseries do in hospitals, too.

With LL, we bought several "swaddle me's" to use to swaddle her at home.  While the hospital is efficient at swaddling with a blanket, I am NOT.  I just can not get it tight enough to contain little arms.  Here is what a "swaddle me" looks like. 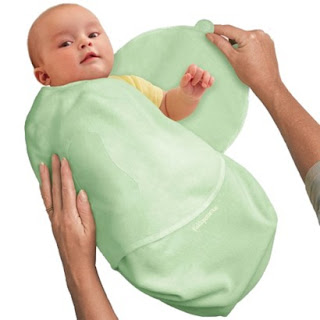 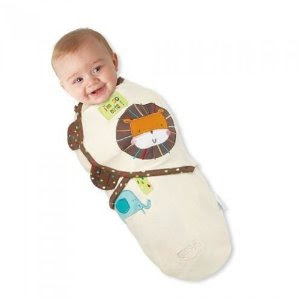 It has velcro that helps you to get the swaddle tight enough to contain their arms, and it has a little pouch for their feet.  We LOVED these with LL and this is what we swaddled her with the entire time.  Here are some pics of LL swaddled: 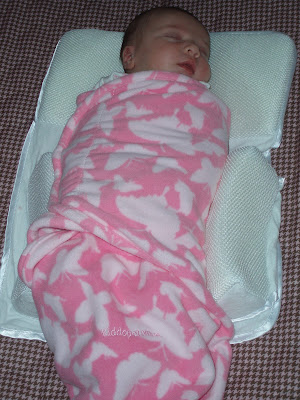 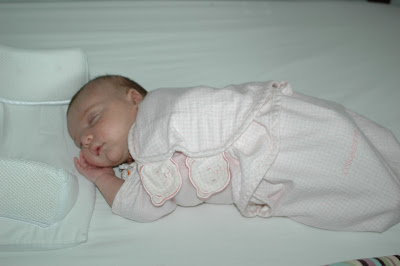 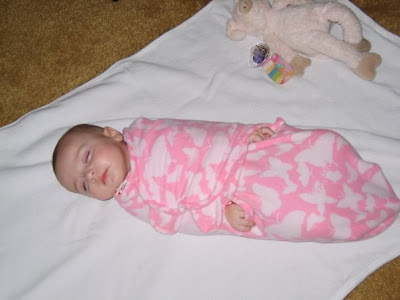 When it came time to wean her from the swaddle, we moved to a sleep sack, and then eventually nothing.  With Cooper, we started the same process with him.  They swaddled him in the hospital, and we used swaddleme's at home.

Pretty quickly I realized that his swaddleme's were becoming way too small.  It was getting harder and harder to velcro the tabs because he was too wide with both of his arms in.  On August 10, I got on Amazon.com and ordered the next size up in Swaddlemes.  By the time we got back from the wedding on August 25, the new swaddles STILL had not arrived.  I was NOT happy.  Since it was exactly 2 weeks since I ordered them, Cooper was now busting out of his swaddle every.  single.  night. because they were too small!  And, you guessed it, every time he broke out, he woke up.  I contacted the company through amazon, and they wrote me back saying that they had declared my package as "lost".  They asked if I wanted a refund or if I wanted them to re-ship.  Um.  Re-ship!  I still need the stupid things!!  They sent me an email on August 29th saying that they had sent them again.  They finally arrived on September 8th.  Um - that is NOT okay.  Don't worry - I'll be sending them an email.  I got out all of LL's old swaddles to see if any of them were bigger.  The first night that he slept in one of her swaddles, this is what I woke up to:

Um - scary!!  The next night, we put him in one that was just a teeny big bigger.  Here's the pic of the poor guy in a pink swaddle.

This past weekend, I was browsing on Pinterest when I noticed that my friend Meghan had pinned something called a woombie.  This is what it looked like: 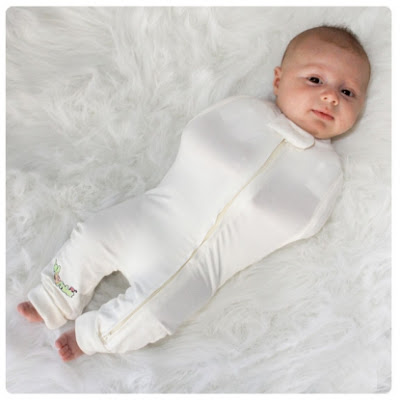 Basically, it's just like a swaddle, but 1- they use a zipper instead of velcro (hello!  he can't bust out of that!), and 2 - it's not as tight as a swaddle and allows the baby to move their arms inside of it.  This sounded PERFECT for what I needed for Cooper.  I'll be honest, I wasn't exactly thrilled at the $28 price for ONE, but at this point, what we had was NOT working and we needed SOMETHING.  It came in super fast (two days - THANK YOU!!), and I was so anxious to try it out.  It came right before bed time, so that was the first time trying it out.

The flash makes it looks super scary, I know.  But without it  you couldn't see anything!

Obviously, I wouldn't advocate using something new at bed time.  But for us, we desperately needed to do something and I couldn't mash him into a too-small swaddle one more time.  I also know that this totally looks like a straight jacket, but I promise that he can move his little arms around in there!

The first night he woke up twice.  Honestly, this is pretty typical.  We had a few days where he only woke up once, but those were few and far between because he kept breaking out of the dang swaddle.  So for him to wake up twice wasn't really anything different.  He mainly kept waking up because he wasn't used to being able to move his arms at all.

The woombie is really pretty awesome because it's made of cotton and a little bit of spandex.  So it's tight (to make him feel secure and doesn't allow him to startle), but it's also stretchy, so he can move his little arms around in there to get comfortable.

Now that he's used it a few times now, I really LOVE it.  He sleeps about the same for naps that he did with the swaddle, and he only woke up once last night in it.  I like that he can move around in there and get comfortable.  He is still getting used to being able to move around (and put himself back to sleep when it does it), but it's literally getting better every day.  Here are some pictures from nap time:

You'll notice that I got the kind that his legs are not in a sack, but in "pants".  Also, if you'll look at the shoulders, you'll notice that there are little buttons there.  That is because I bought the convertible leggies kind.  This means that when it's time to start weaning him, I can unsnap the shoulder pocket and put his arm through.  This leaves the tightness around his body to make him feel secure, but will let him learn to sleep without his arms bound. Obviously we won't be doing this for another month (or so), but this way I have everything that I already need.  I also bought the size that goes from 14 - 19 lbs, so I shouldn't need a bigger one before we start weaning.  I mean, even if we wait until after he's 4 months, he shouldn't be 19 lbs yet! 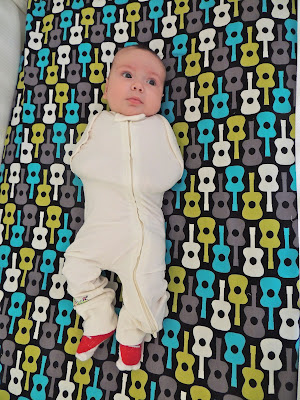 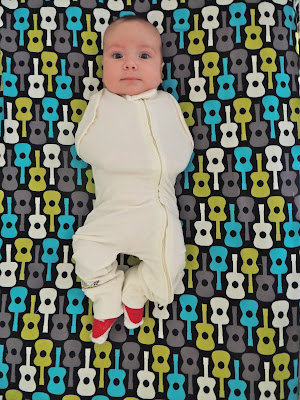 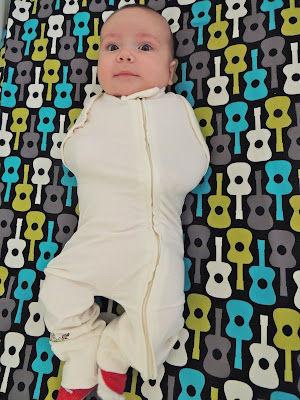 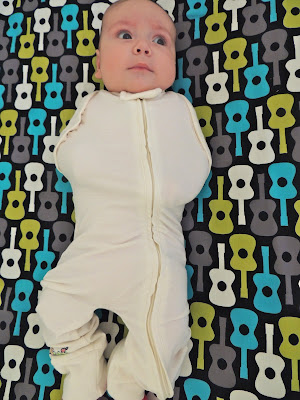 Even for the price, I say that this is the best thing ever.  I wish I had known about them from the very beginning, as I would have used them as soon as we got home from the hospital.  We're not having any more babies (ever!), but if we did, this would be #1 on my list of things to buy.  I for sure think that it is going to be my go-to baby gift from now on!  Before I go back to work at the beginning of October, I will most definitely be buying another one to stay at Grammy's house.  These really are the coolest thing ever!

Looks like I'm going to have to invest in one of these for our baby!

They're kind of pricey, but they are TOTALLY worth it! I'm about to order our second one this weekend. You're welcome to my two when we get done with them. They're the 14-19 lbs ones, so unless you give birth to the jolly green giant like I did, you probably won't need them until Cooper is done being swaddles.