LL's First Trip to the Dentist

***Don't forget to enter my GIVEAWAY that I have going on until Monday!!***

Last October, I signed up for dental insurance during my open enrollment at work.  We've never paid for it before (honestly - it just didn't seem worth the money), but now that we have kids, we know that this is something that we really have to start taking more seriously.  Since LL just turned three in February, I knew that she needed to go to the dentist soon.

Obviously, with having Cooper this summer, time just got away from me.  When Emily posted about Kye's first trip to the dentist, it made me get myself in gear to get her appointment done before I go back to work.  When I called to make the appointment, they were SUPER nice.  I even expressed my concern with the girl on the phone about how I thought LL was going to LOSE.  HER.  MIND.  and she assured me that it would be fine and that that happens all the time.  :)

They recommend that you make pre-school aged appointments early in the morning when, at this age, they are most likely to be in a good mood and receptive for what's going on.  I made her appointment for 9:40.  We headed over to Grammy's to drop Cooper off and headed off to her appointment.

To prepare her for her trip, I had been talking with her for several days about what a dentist is, what he does, etc.  I even had her practice showing me her teeth and letting me stick my fingers in her mouth.  There's also a Doc McStuffins episode about a shark who has to go to the dentist (her fav show!), so we watched that several times, too.  I really think that all of this helped a TON!

I filled out several forms that I printed off of their website so that I wouldn't have to do it there.  They had a few more for me to fill in when we got there, but not many.  Right off the bat I was super impressed with their office.  It was open, bright, clean, and kid friendly.  The had beautiful trees painted all over the walls and toys for the kids to play with in the waiting room.

When they came to get us, LL showed no apprehension at all and walked back willingly (instead of making me carry her like I thought she would do).  We lucked out and got a private room, so she really didn't see any other people getting their teeth cleaned while we were there.  Ansley is the girl who cleaned LL's teeth and she did fantastic with LL.  She showed LL all of her tools and explained them to her.  LL wanted me to sit in the chair and hold her, so I did.  While LL did great in listening, she was - in no way - letting her clean her teeth with the spin brush - haha.  She ended up brushing her teeth with the regular brush.  LL did do great with letting her floss her teeth, though.  She told me later that she didn't like the flossing, but I was proud of her for letting her do it.

After she got her teeth brushed and flossed, we had to wait for Dr. Josh to come and check her out.  We ended up having to wait for a good bit (probably about 30 minutes or so), but LL did great.  Having a TV (in the ceiling!) was helpful - haha.  While we were waiting, LL had to go to the bathroom.  When we got back, she sat in the chair by herself.  Dr. Josh came in shortly after, and I was SHOCKED that she stayed in the chair by herself for the exam!

After he was done, she got her fluoride treatment.  She actually fussed more about this part than any other part of the day.  So random because this was actually the easiest (they used a little paint brush thing to put it on - that's all).  Then, she got to pick a toy from the treasure box (she picked a shark).  Her next appointment is in 6 months, so I scheduled it over my spring break.

After her appointment, we headed to lunch.  I let her pick where she wanted to go and she chose Cheddar's.  I asked specifically for a table next to the fish tank and she was in HEAVEN!  I had so much fun sitting next to her, looking at the fish, and just talking.  We don't get a lot of one-on-one time anymore, so this was just so nice!

This is how close we sat to the fish tank.  She was so happy!

She wanted me to take a picture of the fan - haha.

Drinking lemonade and watching the fish = one happy girl.

After lunch we headed to Target to let her pick out a prize.  I told her if she was awesome at the dentist that she could pick out a toy. At first she said she wanted a blue caterpillar (???), but she ended up settling on these little animals instead.  :)

A few days later, she got this sweet note in the mail along with some stickers.  She was so excited to get this in the mail - it really made her day! 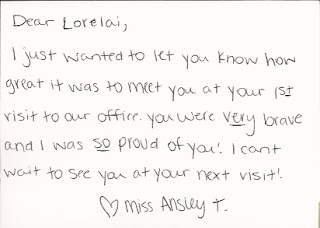 Overall it was a GREAT experience.  I was super impressed with South Georgia Pediatric Dentistry and I'm so happy with how good they made this experience for my girl!