A while ago we got an invitation to a wedding at the end of August.  It's some of Matt's friends from church and he really wanted to go.  I knew that Cooper was still going to be pretty small, so we said we'd just wait and see as the time got closer.

About two weeks out from the wedding we had another talk about it, and we both felt like Cooper would be fine.  Every Friday night LL goes to spend the night with a grandparent (well - until I go back to work anyway.  Then it won't happen so often).  It just gives her some one-on-one time, and they usually do fun things with her so she LOVES it.  It worked out perfectly because the wedding was on a Friday night.  We asked Grammy to come with us so that she could stay with Cooper in the hotel while we went to the wedding.  I know it wasn't the most fun idea for her, but it was a free trip and she got to spend some alone time with Coop.  :)

Friday morning during Cooper's first nap, I took LL to school, dropped off her overnight stuff and car tag to pick her up from school with Oma and Opa, picked up Grammy, and then headed back home.  The plan was to feed Cooper at his 10:30 feeding and then hit the road right as his next nap was about to start (so by 11:30 at the latest).  This worked out PERFECTLY and he was asleep before we even finished backing out of the driveway.  :)

Buckled up and ready to go!

Grammy and Cooper ready to go.

We stopped on the road at 2 and I nursed him (in the car, in the parking lot, behind a restaurant, next to a dumpster - haha.  But at least no one saw me!), changed his diaper, and finished the last 45 minutes of our trip.  We got to the hotel right as his next nap was supposed to start (even though he didn't really sleep much of it because of all of the excitement of getting there).

Hanging out with Grammy in the back seat.  Grammy and the iPhone camera don't exactly get along (hence the blurriness - haha).

This is a HILARIOUS video that Grammy took (not because of Cooper, because of her - haha) on the drive up.  Remember I said that Grammy and the iPhone didn't get along?  Well, she totally had no idea that she had switched it to video, so she was doing all of this to try and get him to smile so that she could take a pic of it. As you can tell at the end, she had absolutely no idea she was filming.  Love it.

We made it!  First time in a hotel room!

The wedding was at 6:00 (but about 30 minutes away), so we had a few hours to get settled, get ready, get everything ready to leave Cooper for a few hours, make sure Grammy had everything she needed, and hit the road.

Our room didn't have a refrigerator, so instead of champagne on ice, we had breast milk on ice.  :)

The lighting in the hotel room was HORRIBLE!

The wedding was so so cool and one of the neatest ones that I've ever been to.  I'm telling you - if I was getting married now, my wedding would be MUCH cooler than the one we had -haha.  8 1/2 years ago there was no pinterest or anything like that!  One of my favorite things was that when the groomsmen walked down the aisle, they all were playing an instrument (guitars, shakers, tambourines, etc).  It was a slower song (and they all were playing the same one - duh), but it was really neat how they formed a little band by the time all of them had walked down to the front.  It doesn't sound quite as neat as it actually was in person.  There was a good little crew from Valdosta that drove up and we surprisingly knew quite a few people.  We really did have a great time!

Duh - we couldn't pass up playing with these!

They had a candy bar at the reception with these cute bags.  LOVED it.

This was everyone who traveled from Valdosta. 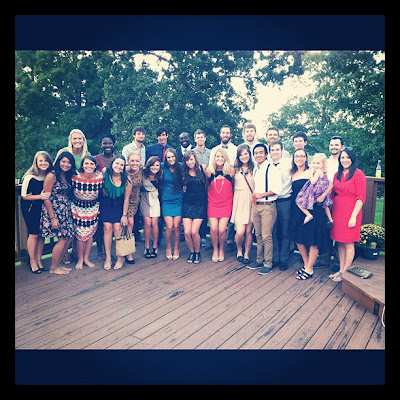 We intended on staying a little longer than we actually did, but I had been battling allergies/a cold for several days and was feeling HORRIBLE, so we headed back to the hotel a little early.  The next day we had pretty much the same plan we did on the way up.  We got up, fed Coop, at breakfast, and put him back down for a nap.  While he slept we finished getting ready, packed our stuff, Matt worked out in the hotel "gym" (it was not so nice), and I even took a little nap.  After he ate at 10:30, we checked out and headed home!

Ready to go home!  (Grammy and the iPhone again!)

We stopped for gas on the way home and there was a DQ attached.  Hello dip cone!

There were TONS of utility trucks headed down to FL in anticipation of the hurricane.

We had to stop about 30 minutes from home to feed Cooper again (this time we weren't by a dumpster - just a rest stop - haha).  We made it home by about 3:00ish and had about an hour before Oma and Opa brought LL home.  It was a fun (quick!) trip and I'm so proud of Cooper for doing so well!

Even though he did great, somebody was happy to be home.  :)

Yay for a successful first trip! And so nice of mrs becky to tag along :)

I know this is random, especially since you don't know me. My brother was the dj at the wedding you were at, and my sil was the photographer. I was looking through their pictures on instagram and saw the one you posted on here. By the way I found your blog through Emily's.

That's so funny about your brother and sil! We really enjoyed the wedding - I can't wait to see pics that your sil took!