My little man is officially two months old!  He is growing so fast and changing even faster.  Sometimes it seems like I can just see the wheels turning in his head as he is learning new things.

Nursing:  There's not much to report in this area.  He's still doing fine, but I did notice something a little different this week.  Last week, I talked about how he was starting to take a little longer to nurse each time.  He still is (which is totally fine), but he's also started spitting up MORE.  Before, it was little dribbles here and there with the occasional really big one.  Now, it seems like he spits up a HUGE amount almost at every feeding.  It makes me wonder if he's actually getting too much (since he's nursing longer) and that's just his body's way of getting rid of what he doesn't need (the excess)?  It's not projectile and he's a happy spitter, so I know it's nothing to worry about.  It's just weird.

Sleeping: Last week we had a horrible week with sleep and it made me wonder if he was in a wonder week.  Then, on Tuesday of this week I got an email saying that a wonder week is probably going to happen soon.  This week, his sleep has been GREAT compared to last week, so it really backs up my theory that he just had his wonder week early.  One day this week he fell asleep like he always does on the way to pick LL up from school.  When we got home, I took him out of his car seat, swaddled him, and put him in his crib.  This made him MAD and he ended up screaming/crying for almost the entire time until his next nap (about 2 hours).  I held him for almost this entire time and it didn't really help at all.  Luckily, after his next feeding he got right back on track and didn't have any more issues that day.  Then, another day, he fussed at the same time (after putting him in his crib after picking up LL), but all I had to do that time was just take him out of his crib, hold him for a second, and then put him right back in.  He immediately calmed down and went right back to sleep.  Other than these two times, he has done absolutely PERFECT in his sleeping this week.  Last week I had to go and get him during his first nap every single day.  This week - I never had to.

He is still having his "witching hour" from 6:30 - 8:00 every night, but it is getting to where it isn't quite as intense as it has been.  He is still pretty fussy, but it's just not as bad as it has been in the past. Hopefully it'll stop soon.  :)

He's still waking up twice a night to eat.  The first time is usually between 1-2 and the second time is somewhere between 3-5.  On Saturday night we moved him into his room for the first time.  He has napped in there a ton, but never slept in there at night.  Honestly, I think he wouldn't get up to eat twice if I would just let him be.  Since he's been in our room, I could obviously hear every move he made.  As soon as he started stirring AT ALL, I would get him out and feed him.  He has never cried or fussed in the middle of the night because as soon as I heard him grunting, I would get him out.  He does this during naps a TON but never fully wakes up and goes right back to sleep.  It makes me wonder if I've been getting him out and feeding him without him really asking me to.  Now that he's in his own room, it'll take me a little longer to get in there at night, and I'm going to see if he'll just grunt a little and go back to sleep.  Obviously, if he's hungry in the middle of the night, I'm going to feed him.  I'm just curious to see if he's really hungry, or if I'm just jumping the gun on getting him out of bed.  I'll let you know next week!

He is so dang snuggly!!

Rolling Over: Last week I mentioned that he had rolled over on Saturday.  I thought at first that it might have been an "accidental" rolling over, but I can tell you now for 100% certain that it's not.  This kid literally rolls over almost every time you put him on his belly.  I kid you not when I say that he's rolled over AT LEAST 15 times this week.  Also, when he first started doing it, he only rolled to his right side.  On Thursday, he rolled to his left side for the first time (and has since done it again).  So he can officially roll from his tummy to his back both ways!  I'm so proud of my boy!  Here are some videos of him in action:

You can't tell me that this is accidental!  Dude knows exactly what he's doing!

Development/What's Going On:  Here's what else Cooper has been up to this week!
-He started hitting the toys on his car seat toy.  It's been hanging up there for about two weeks, but he's never done anything but stare at it. I noticed one day on the way to pick up LL that I could hear him hitting it.  I don't know if it's intentional or accidental, but he's hitting it!
-I can't decide if it's allergies or a cold, but Cooper has had a super stuffy/runny nose this week.  In fact, all of us but Matt have.  It could be a cold that LL brought from school, or it could be that something is in bloom that doesn't agree with us.  Either way, I've been having to use saline and his bulb to clean out his nose this week.  He HATES it (I can't really blame him), but it does help him.  It's amazing how much junk can come out of such a little nose.  I also ran the humidifier a few nights because it helped both of us sleep better.  I also elevated one side of his pack-n-play to see if that helped, but I really didn't notice a difference.
-He had started smiling a lot more for sure.  He's still a pretty serious little guy and we have to work super hard for those smiles, but we're starting to see them more and more.

-He has still been sucking on his hands a TON.  He doesn't just do it when he's hungry, he does it ALL the time.  It's really like if anything ends up near his mouth, he's going to suck on it.  He is definitely becoming a pro at getting those hands up there.  What's funny, though, is that he puts no fingers actually IN his mouth.  He just sucks on his fist.
-He took his first out of town trip this week (post to come!).  It was just one night and only to Atlanta, but he did great!
-When we got back from our trip we decided to not set the pack-n-play back up in our room and just moved him into his room at night.  We had planned on doing in on Sunday night anyway, so it was just one night early.  He's doing great and doesn't seem to care!

Down for the night in his own room!

Here are some random pics of Cooper from this week: 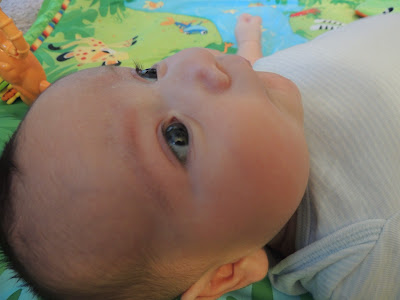 He LOVES to look around from propped up on our shoulder!  And, yes, that is where he puked on my leg - haha.  The life of a mom to a baby!

I was trying out a new hold with the moby wrap because, shocker, he was too big for the newborn hold anymore.  He liked this new way much better!  I can also face him out in this same hold once he gets a little better head control.

Daddy tried it and actually liked the moby wrap, too!

This is a video of him wiggling like crazy one night!

All dressed up for church!  This was his first time wearing something that was two pieces.  My fav part?  The shoes.  :)

have you ever skipped the dream feed??? it seems like with both my kids I would accidentally over-sleep the dream feed and quickly found out they BOTH slept better with out it!!!

I bet he'll be waking up less in the night now that he's not in your room too. Those little grunts may just be him transitioning in phases of sleep ;) Big boy!!!!

I have accidentally slept through it before and it didn't seem to make a difference. You'll read about it next week, but this week I've been testing out some of my theories to try and get him to sleep longer, and moving the dream feed to earlier in the night has been helping. When I did that, he started only getting up once a night! I really think it doesn't help him a ton, but I'm not quite ready to give it up yet.