This week was a pretty crazy week.  On Monday I had my 6 week postpartum check-up.  Oma came to stay with LL (it was during her nap time), and I just took Cooper with me.  Then, Gigi came over on Tuesday to spend the day to see my daily routine with Cooper.  I had to go back to work on Wednesday and Thursday (during pre-planning) to get my room ready for my maternity sub, and Gigi was going to be at my house taking care of Cooper for me.  But nonetheless - here's how our week went!

Nursing:  This area is going great!  He got two formula bottles on Wednesday when I was at school, but I pumped while I was there, so he got breast milk bottles from Gigi on Thursday.  He did great with his bottles from her!  He averages 3 oz per feeding, but he did drink 4 oz at one of his feedings on Thursday.  When I'm home, though, I'm just strictly nursing him and he doesn't get any formula at all.  I am happy that he has had it before, though, because he has no issues taking it when we need him to (like on Wednesday).

Sleeping:  It seems like this area is always up and down each week.  Basically, I think it breaks down to the fact that he has (on average), two bad sleeping days a week.  When Gigi was over on Tuesday, Cooper had a pretty terrible nap day.  This actually worked out well because it showed Gigi the worst that it would be the next two days.  Really, there was only room for improvement.  I would rather her see a rough day and then the next two days be better than for her to see an easy day and the next two days to be rough.  Luckily, Cooper did much better for Gigi on Wednesday and Thursday.  We had another "off" day on Saturday, too.

Swaddled babies always look so funny to me.  :)

Cuddling with Gigi while I was at work.

I couldn't WAIT to get home to my boy and get some snuggles!!

His little hand was just holding on to my shirt.  :)

This is the CUTEST video that my mom sent me while I was at work of Cooper sleeping.  You can totally hear him snoring and just how NOISY he is!

Schedule:  Last week, I talked about how I was going to move him to the 3-3.5 hour schedule next week.  He was on his 2.5 - 3 hour schedule from Monday - Thursday, but when I was home with him on Friday, I decided to just go ahead and try to move him that day instead of waiting until Monday.  Next week is also kind of a weird week because LL has open house on Monday and starts school on Wednesday.  It felt like a weird time to start a new schedule, so I figured starting it on Friday would at least give him 5 full days on the new schedule before we had to start picking LL up from school every day.  Here's his new schedule:

He still is waking up two times a night.  Usually once between 1 and 2, and then again around 5.  I'm patiently waiting for the time when he either drops one of those or sleeps through the night!

Development/What's Going On:  Here are some other things Cooper has been up to this week:
-On Tuesday, I accidentally slept through Cooper's dream feed.  He had a really hard time going to sleep and I nursed him at 9:00 in an attempt to get him settled and asleep.  Then, I went to bed and set my alarm.  Matt and I both went to sleep shortly after and we were both SO tired that we didn't wake up to my alarm at 10:30.  I woke up at 1:00 when Cooper was waking up to eat again.  This means that he went from 9-1, and missing the dream feed didn't mess up our nightly schedule at all.  He still only woke up twice!
-I know this sounds weird, but he has the SWEETEST baby breath.  I remember this will LL, too, but had totally forgotten about it until I noticed his.  It just smells SO good to me!  Kind of like how I love the smell of puppy feet and puppy breath - haha.
-I came home from my first day being away from him on Wednesday just in time for his 4:00 feeding.  After he got done eating, I was talking to him and he gave me a smile.  So sweet!
-We also missed his dream feed on Thursday and he slept for one 4 hour stretch and one 4.5 hour stretch - his longest yet!
-Towards the end of the week he started becoming very distracted during nursing and was acting very uninterested in eating.  This was another reason I thought he was ready for the 3.5 hour schedule - he didn't seem to be starving at eating times.
-He was a VERY smiley boy on Saturday and I got more smiles from him than ever!
-He LOVES to look at the fan.  He looks for it in every room and I joke that the fan is his best friend.  I always ask him, "Did you find your friend?"  LL used to do this, too.
-He never sleeps with his head straight up and down - it's always turned to one side or the other.  He seems to prefer it turned towards his left side, though.
-He doesn't really like his swing (either of them) or his boppy chair very much.  He really won't nap in them at all any more, and doesn't really care to be in them when awake, either.  It definitely makes dinner very interesting!  I'm usually scarfing my dinner down in the few minutes that he'll stay in there.
-I think he is going to be more of a "serious" baby than LL was.  Don't get me wrong - he is happy *most* of the time that he's awake, he just isn't super smiley.  I know that it's still really early and that all of this can change, but my mommy instinct just tells me that he is a more serious baby.  I guess we'll see.

Here are some random pictures from this week:

I was so happy that Marie got to see Cooper again!!  Seriously, she's the best midwife EVER! 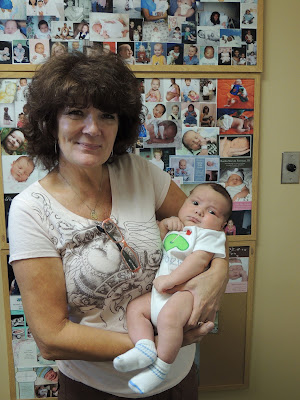 He acts like a bird anytime something gets close to his mouth!

Lorelai is still doing fantastic with him and is a WONDERFUL big sister!!

He already gets tired of pictures.  Too bad, kid!

All dressed up for church!  My handsome boy!

Me:  I'm doing well!  I was SUPER nervous about leaving him for two days this week, but I actually handled it pretty well (I think).  I did check in with my mom a TON (probably more than she wanted -haha), but she knew that it had nothing to do with her and that I just wanted to know what was going on with Cooper.  I'm used to spending 24/7 with him and knowing every single detail of his day, so I was just trying to do the same thing even when I was gone.

I did enjoy being at school some.  It was nice to be an adult again, to wear clothes that weren't pj's or yoga pants, and to have conversations with someone other than a preschooler.  After two days, I was ready to get back to mommy land, though.  :)

Towards the weekend, I really started realizing that this is totally starting to feel "normal".  Having Cooper in our house does not feel weird in the least little bit anymore.  Don't get me wrong - I'm still trying to get a handle on the logistics of having two, but I don't feel like having two feels abnormal anymore.  I like it.  :)