My little man is already two months old!  This has been a WONDERFUL month and I have loved getting to know him even more.  He is a great baby and for sure has his own personality.  He is sooo different than Lorelai was in some ways, but then in others he seems so similar to her!

If you remember from last month, I'm going through What to Expect the First Year and looking at the milestones that they give for each age group.  Here's how Cooper has been doing this month:

Stats:
Weight: I'm guessing between 13-14 pounds.  We have his 2 month appointment this week and we'll find out for sure.
Size Diapers: Still in a 1 but we're pushing it.  After we finish up with all of the size ones that we have (we're almost done with them), he'll move up to a size two.
Size Clothes: Still in 0-3 months and 3 months, but I just washed all of his 3-6 months for him to start wearing.  Some of his 0-3 month is getting awfully tight! 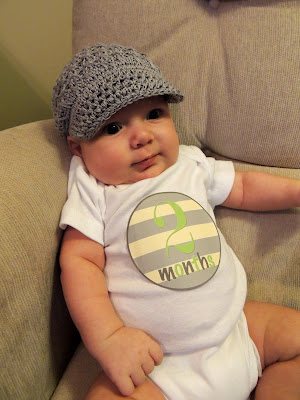 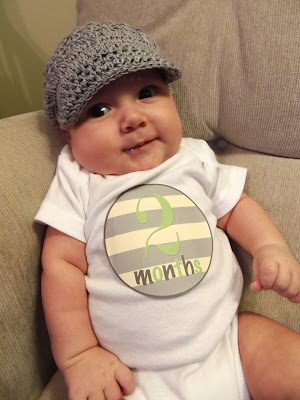 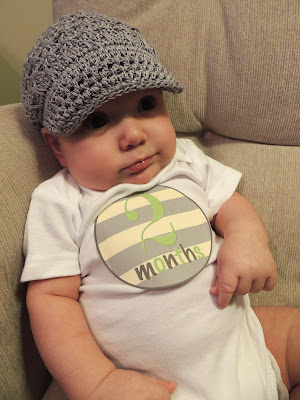 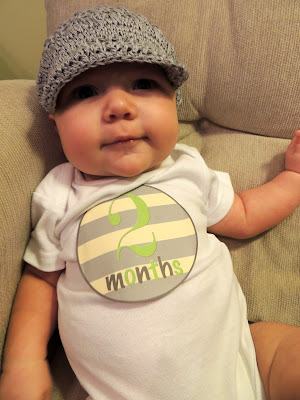 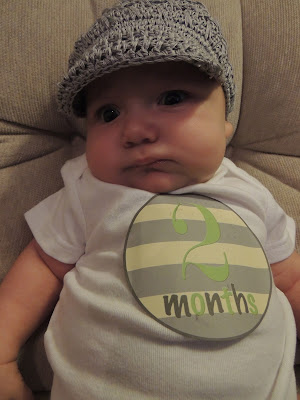 Cooper can do all of the things that a baby should be able to do at two months:
-smile in response to your smile
-respond to a bell in some way, such as startling, crying, quieting 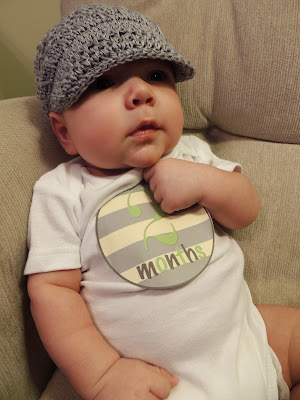 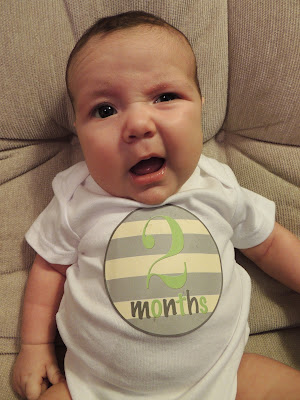 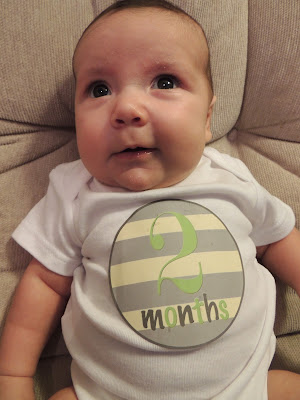 Cooper can do all of the things that a baby will probably be able to do at two months:
-vocalize in ways other than crying (e.g. cooing)
-on stomach, lift head 45 degrees 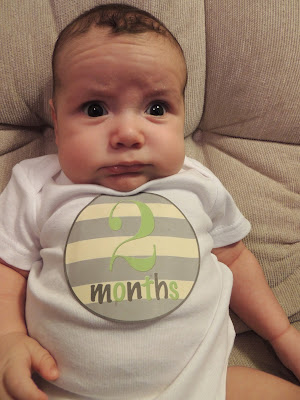 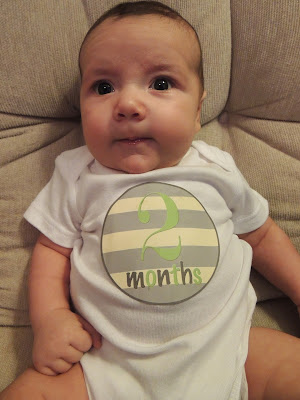 Cooper can do some of the things that a baby may even be able to do at two months:
-hold head steady when upright {he still gets wobbly sometimes, but he's getting VERY good at this}
-on stomach, raise chest, supported by arms
-roll over (one way) {He can go two ways!!}
-say "Ah-goo" or similar vowel-consonant combinations 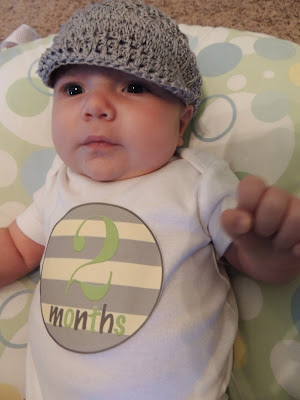 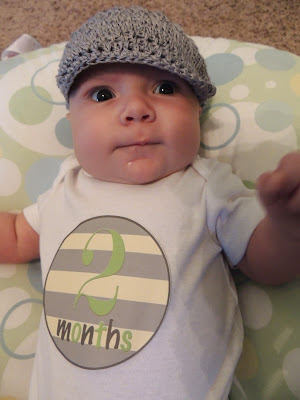 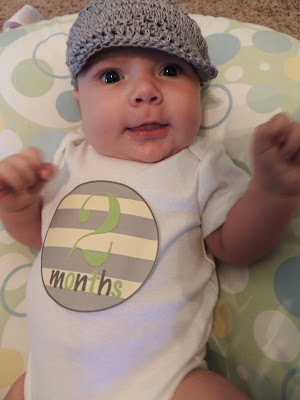 There were three things that Cooper does not do from the "may even be able to" section:
-grasp a rattle held to backs or tips of fingers {He can hold it for sure, but he doesn't grab it on his own yet}
-pay attention to an object as small as a raisin {Honestly - I haven't tried this one - so he may be able to do it}
-reach for an object 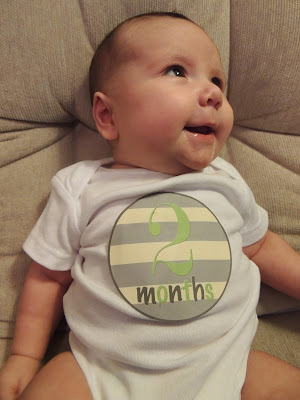 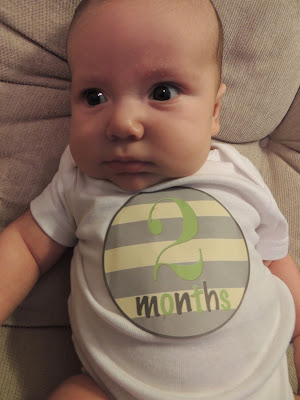 Cooper can do some of the things that a baby may possibly be able to do at two months:
-smile spontaneously
-bring both hands together
-on stomach, lift head 90 degrees {Homeboy is STRONG}
-follow an object held about 6 inches above the baby's face and moved 180 degrees, with baby watching all the way. 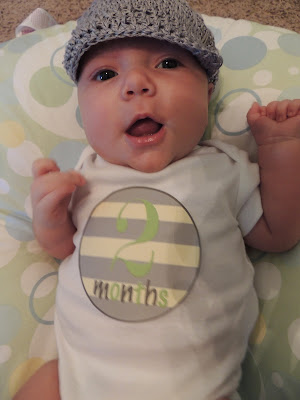 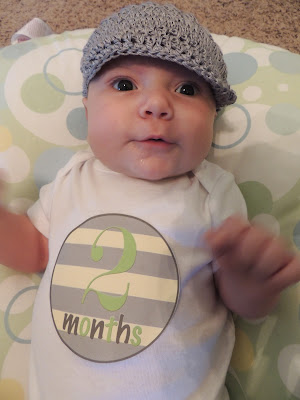 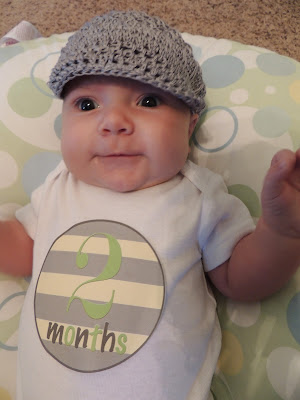 There were two things that Cooper does not do from the "may possibly be able to" section:
-laugh out loud
-squeal with delight

He is such a SERIOUS baby that these may take a little more time.  :) 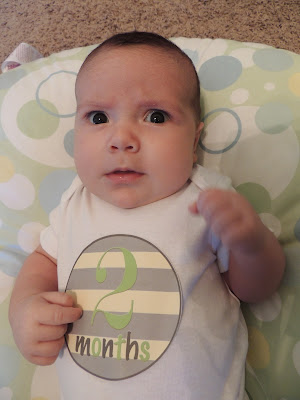 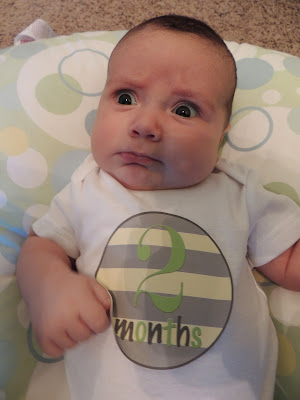 Cooper really is such a delightful baby and I can't imagine not having him as a part of our family!  I'm really going to enjoy this next month home with him as I'll be going back to work right after he turns 3 months old.  I feel so blessed to be able to stay home with him this long and I'm so excited to spend so much time with my little man!

Finally, you should know by now that I LOVE some comparison shots!  ;) 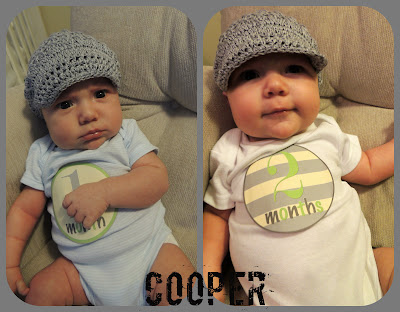 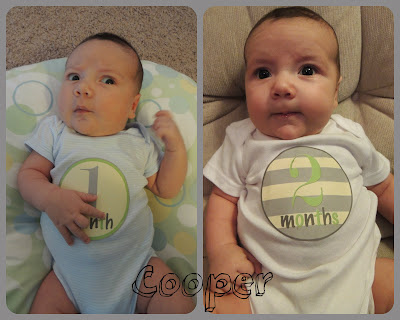 I think that you can FOR SURE tell that they are siblings!

Look at how cute he is in his little hat. I love comparisons too. They do look alike