Before I had LL, I used to work for a place called Tiny Bubbles during the summer.  Margie, the lady who owns Tiny Bubbles, was a member of the church Matt was working at and we because fast friends.  Tiny Bubbles is not your regular place to go for swimming lessons.  They do not just teach your child how to swim, they teach survival swimming.  The difference is pretty large between the two things.  I really could go on and on about the details, but it basically comes down to Margie teaches kids not only how to swim (and swim correctly in the pool with face in the water and no floaties!) but she teaches them what to do if they get in a stressful situation in the water (i.e.: tired and out of breath while swimming, falling in, falling off the steps, etc.).  Emily actually wrote a GREAT post on this last summer (waaay more detailed information about survival swim if you're interested in learning) when Kye was taking lessons.


This is where LL's story starts.  Margie can start kids as young as 6 months old in survival swim.  LL's first summer, she wasn't quite 6 months yet, so we waited until the next summer to enroll her.  We went through the whole program that summer and LL did well.  And by "well", I mean that she would do what Margie wanted her to do.  But here's the catch.  She HATED it.  She screamed the entire 5 weeks, and any time we made her do it an another pool, she acted like we were killing her.  She could do it - she just didn't want to.  The next summer (2011), we enrolled again.  Again, she did what Margie wanted her to.  But again, she HATED it.  She screamed the entire 5 weeks.  Again.  And any time we tried to get her to do her swim stuff in another pool, she again screamed like we were trying to kill her.  So basically, after two years of swim lessons, my child COULD do it, but never did.  Which means that I had a 2 1/2 year old who wanted to stay on the steps or on a float in the pool after we had spent 10+ weeks in swim lessons and lots of $$.  Not cool.


This year came around, and I again signed LL up for swim lessons.  If nothing else, I wanted her to continue to refresh herself on the survival part even if she hated it.  I wanted to know that my child was safe in the pool, even if she wasn't happy about it.  Every other year at lessons, LL has screamed the entire lesson until it was time to get out of the pool.  Once she got out, she was as happy as can be.  She would also scream the entire (almost 45 minutes!) car ride to swim lessons.  To say I was not looking forward to that this year was an understatement.  Here's where my child surprised me: she got over it.


The first couple of days that we went, she would cry at home and cry in the car, but she never got hysterical.  Usually, if I just talked to her the whole way there, she would calm down until we pulled into the parking lot.  She also shocked me a TON because as soon as she got in the water with Margie, she would stop crying.  She whimpered and whined a little, but she didn't scream and cry.  The biggest shocker to me was how respectful my strong-willed child was to Margie.  For a strong-willed child, giving up "control" is an even bigger issue than it is for other kids.  And giving up control in the water (for any child!!) is a very scary thing!  I was so impressed with how well LL trusted Margie, even from the beginning.  She would be SO upset in the water, but every time Margie explained what they were going to do, LL would whimper a little, tell her "ok", and then do it!  That is totally NOT like my child!  Margie has such a great way of being extremely in control of the lesson, being firm with the kids (and not letting them get away with anything), but at the same time being very loving and earning their trust.  It's amazing to watch, and it is definitely not a gift that every adult has.


LL and I did this for about 2 weeks.  We came to swim every day, she did what Margie asked her to (and was doing great at it!), and then we left.  But here's where she was hanging on to stuff from past years: any time we went to my mom's to swim, LL would freak out if we tried to get her to do swim stuff.  Like, she would lose her mind and just want to get out of the pool completely.


Finally, I asked Margie one day, "How do I get her to do this stuff outside of swim lessons AND have her enjoy it??  How can I incorporate what you're doing and her love for the water??"  I knew that if LL would realize she could legit swim, she would love the water even more.  I just had no idea how to combine how she loved to play in the water (outside of swim lessons) with what she was learning at swim lessons.  This is where Margie's blutness came out. :)  She point-blank told me, "You have to make her do it."  She basically said that we had to make her do it every time.  Even if she hated it.  She asked me, "Just make her do it.  If she won't do her swim stuff, don't let her get in the pool.  If she hated to clean her room, would you just let her not do it?".  I kind of smiled and said, "If it's either 'do swim stuff'  or 'don't swim', she's just going to choose to not get in the water.  At all."  That's when she just looked at me and said, "Make her do it."  At the end of her lesson that day, Margie gave us some "homework" to do in Gigi's pool over the weekend.  One of the things that she also did was let LL take home a little starfish pool toy that she had to "take care of" over the weekend.  This is perfect for LL and her personality!


That weekend we had a garage sale over at my mom's.  Towards the end of the sale (when things had died down), Matt and I took LL out back to the pool.  I had been telling her all morning that we were going to get in the pool, but that we also had to practice "Mrs. Margie stuff".  She knew what I was talking about because she remembered the starfish (she had been carrying it around NON-STOP) and knew she had homework.  We let her get in the pool and just "play" for a little bit, and then we got to work.  Margie had been having her use goggles at lessons (LL did much better with them than without) AND some swimming fins (LL calls them her "mermaid tail").  We bought some to have at home, too, so I got both of those on her and told her it was time to practice.  At first, she was NOT happy and started to freak out.  Then, I reminded her that we had Mrs. Margie's starfish and that she could swim and get it out of Daddy's hands.  This calmed her down and she was okay with doing it.  We totally made a game out of it (finding the starfish in Daddy's or Mommy's hands) and gave her TONS of praise each time.  Gigi and Grammy would also both pop in every now and then from the garage sale and reinforce this praise.  Literally, it's like something just clicked.  You could literally see it happen.  All of a sudden, she realized that swimming could be FUN.  For the next hour, we couldn't keep her from swimming.  She swam non-stop.  Honestly, and I know this is gross, she swam and swam until she made herself throw up.  Then we MADE her get out - haha.  It was like turning it into a game made her see how fun it could be!  She was EXCITED about it!  Here's a video we made for Mrs. Margie (that I texted to her) on the day that it all clicked.

What's funny is that we had tried all of this both of the previous years that she took swim.  I guess she just wasn't ready for it yet (not swim lessons, but the letting go of control part).  Really, though, it has changed her life.  I know that sounds crazy, but it really has.  She LOVES to go swimming now and going to lessons is something that she looks forward to.  After her lesson, she begs and begs to swim in the little side bubble pool that Margie has and will even wear her goggles in there and try to kick (it's really too shallow for that).  It's to the point where I have to maker her leave every day.


It sounds cheesy, but I could really cry when I watch her every day because I see how happy she is in the water.  And I see my 3 year old swimming CORRECTLY and having a blast.  She doesn't have to depend on Mommy to be right there (even though an adult always WILL be - duh), or need a float to sit on, or need floaties.  She can do it on her own.  I love to see her self confidence and the freedom she has in the water.


It has been a long, hard road with these lessons, but it has finally clicked for her and I can't be happier.  :)  So, after this long novel (if you're still around), here are some pictures and videos from our leasing the past few weeks.

This is one of the first things that they learn how to do - swim to a target (hands, a toy, the side of the pool, etc.) 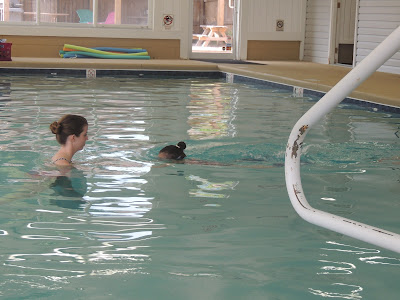 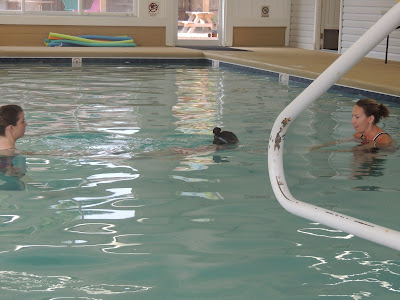 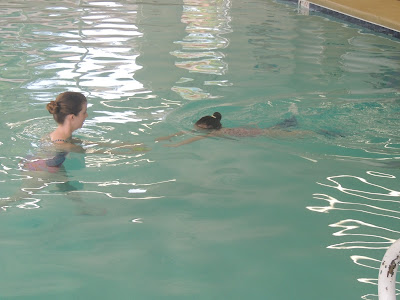 This is her starfish.  This is the "resting position" that they are taught in the water.  For babies, this is basically all that they do (and cry!) and wait for someone to come and get them out of the pool.  This is the biggest life saving technique.  For older kids (like LL) this is used for two things: it is still their life saving technique, and it is what they do while swimming to rest and get air. 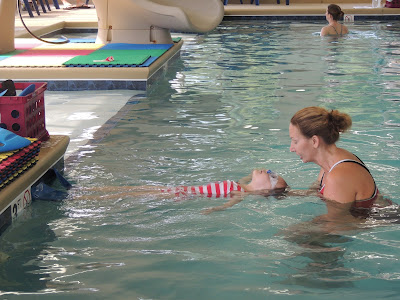 Turning from her star fish to swim and get Mrs. Margie! 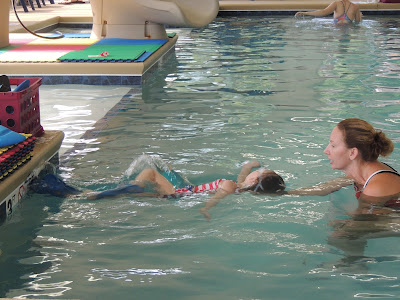 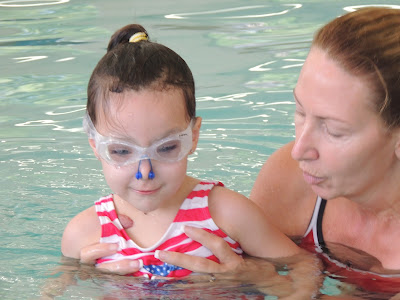 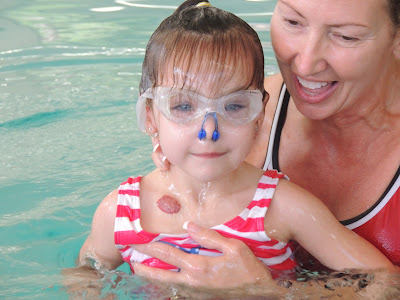 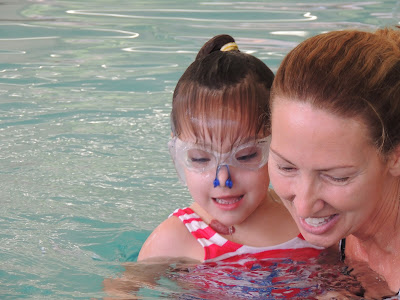 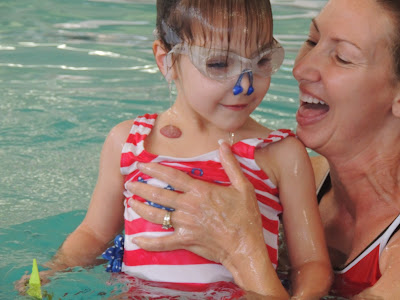 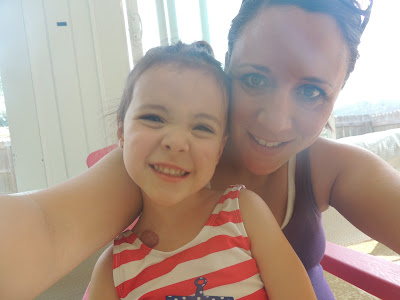 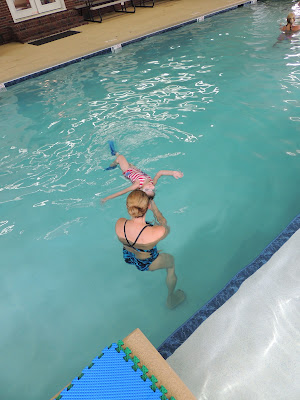 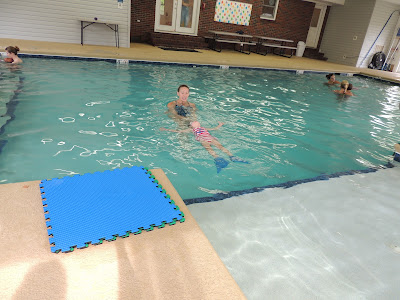 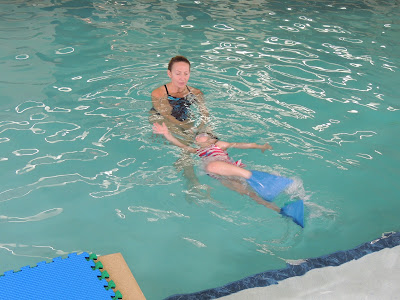 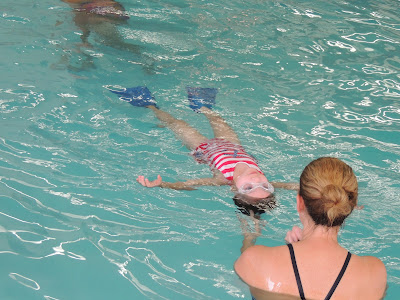 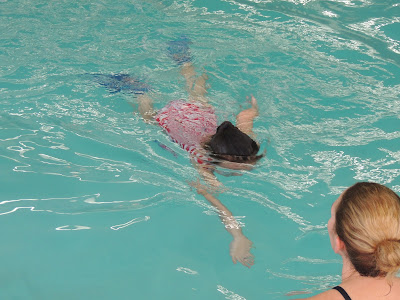 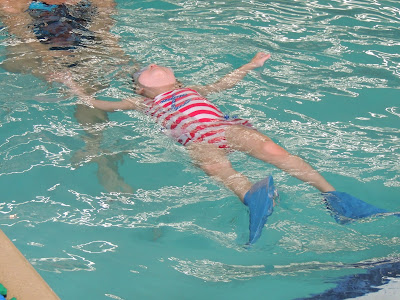 She also randomly started using her hands to swim one day instead of her feet.  Margie taught her to swim with her "princess crown" on top of her head to reinforce her using her legs.  It's so cute - I really recommend watching the video of it.  :)

For the two summers that I taught at Tiny Bubbles, I did not teach survival swimming, I taught stroke.  This is what LL will be ready for next summer (really -any time after these lessons are over).  I've debated on just teaching her myself (since, duh, I know what to do), but I really think we'll probably just put her back in lessons.  Baby C will be taking survival swimming next summer, and I know that LL would love to have her own time in the pool, too.
I can honestly tell you that through two years of a screaming child who could do it, but refused, this is totally worth it.  No child is ever "drown proof", but no adult is, either.  I feel so much better knowing that I've done everything that I could to make LL as safe in the water as possible.  Plus, it makes it totally worth it to see the freedom and confidence that she now has in the water!  I owe a HUGE thanks to Mrs. Margie and what she has done for my girl!!