Wow!  Today marks the first day of my 9th MONTH!


Baby Growth:  At this stage in the game, Baby C is putting on about an ounce a day in weight.  The average baby is about 6 lbs right now (I'm SURE he's probably much bigger) and is about 18 1/2 inches long.  At the end of this week, he will be considered "Full Term" - yay!!  Most of his systems are working just fine in there - he is just really concentrating on maturing those longs and packing on the pounds. 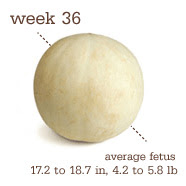 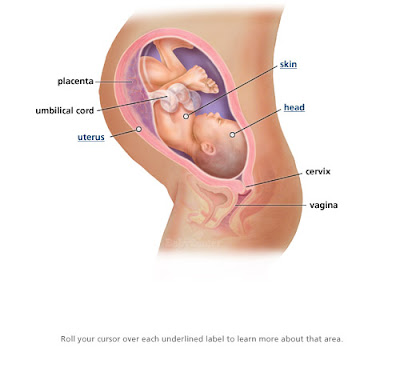 My Symptoms:  This week has had it's fair share of ups and downs. Some days I'm feeling terrible and just think that I'm so over this.  Then, some days I don't feel so bad and I'm happy to have a few more weeks (hopefully) to enjoy pregnancy.  It really is just a touch and go kind of thing.


I really think that my biggest symptom this week is one that I really can't confirm - but I REALLY think that he has dropped.  I'm not having nearly as much heartburn and he just feels lower.  I have no idea how to know for sure, though, so I could be totally wrong.


I've also had a ton more pressure on the top of my legs this week.  It doesn't seem to matter if I'm sitting or standing -  it just feels like the top of my legs don't get great circulation.  I think this also kind of confirms my idea that he's dropped??


My heartburn has been much better this week.  I've still had a good bit, but not nearly as much as I have been having.  My hip pain is still pretty terrible.  I literally wake up at least once an hour during the night with my hips (both of them) just killing me.  I'll roll over and change positions, but it doesn't seem to help much.  By the next hour, they're hurting again.  I've also started to have some back pain in the middle of my back, but I think that it's related to me sleeping poorly.  I think my sleeping posture is bad and is causing this?  Is that even possible?  I don't know.  I just know the first 30 minutes of me being awake in the morning is not very fun!


On Sunday I had a TON of Braxton Hicks.  They just started coming back to back and it really started to freak me out.  I texted Emily about it and she seemed pretty unconcerned, so I just tried to ignore them and eventually they calmed down.  I noticed that I had a few more than "normal" (for me) on Monday, also, but again I don't think it's anything to worry about.  I have also felt a few very very mild contractions/cramps also.  They've been nothing consistent and nothing that really hurts.  It's like they're just enough to grab my attention and then they stop.


My nesting has for sure kicked up about 1,000 notches this week.  I have been working like a mad woman on the tons of things that we have to do.  I'm getting so much accomplished!!  While I love checking things off of my list, it sure does wear me out and I'm usually absolutely exhausted by 4pm.


Weight:  I guess last week was a fluke?  I have no idea.  Total - I'm at 23 lbs right now.  Not bad, but I don't really want to gain a ton in the next 4 weeks.  Hopefully I'll have minimal weight gain until he gets here.

It is so funny to me that it's crazy obvious that my belly button is crooked - haha. 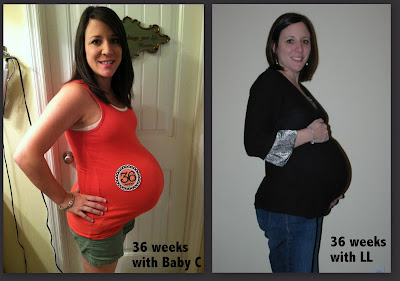 
Maternity Clothes: I don't even know how to answer this.  I'm honestly just wearing whatever in the heck I can fit into!  Which isn't much!  Some of it is maternity, some of it isn't - but none of it looks cute anymore!  I'm sure at this point my clothes are as tired as I am - haha.


Movement: Actually, still a good bit.  Mostly just a ton of rolling around, but I can still feel him - for sure!


Sleep: This has been a little better, but not by much.  I'm back to waking up to go to the bathroom a ton.  Add that with my hip pain, and it is just very very broken sleep.  I'm SO THANKFUL that I'm not having to go to work everyday!!  It is such a blessing!


What I Miss:  Not being so dang worn out after doing NOTHING!  I'd like to be able to accomplish a task without having to sit down in the middle of it and rest.


Cravings:  MILK!  I literally am drinking so much of it right now - especially at night.  It really is like I can't get enough of it!


Best Moment of the Week:  LL has really started touching my belly more and saying she feels him kick (even when he isn't - haha), and he has been talking about him a TON lately.  I really, really like it.  :)  This is not pregnancy related, but I think it's my absolute favorite moment of the week.  We took LL swimming at my mom's on Saturday and we had some "homework" to work on from her swim lessons.  She started to freak out (as usual), but then we just saw it *click*!  She FINALLY got that swimming can be FUN if you do it the right way!  It was SO AWESOME to watch her make that connection!  She literally did not stop swimming for the next hour and swam so hard that she made herself throw up.  She says all the time now that she is a fish and just begs to go swimming.  I LOVE it!


Questions or Concerns:  Lots to talk with Marie about at my appointment.  Most of it I can't really map out until we know how big he is.


Goals for the Week:  I got a lot done this past week, but I still have a few things I need to do:
-pack Baby C's diaper bag for the hospital
-go with Matt to pick out his "coming home" outfit
-pack LL's bag for while I'm in the hospital
-continue working on my cleaning list for the house
-start freezing some meals

Almost there! You look great:)

you are looking very cute in images, you have a great belly. I hope you would be deliver a healthy baby very soon...