For the past few years, my sister and I have been trying to go on a girl's trip in the spring/summer.  The first year (in spring 2008) we went to Destin, FL for a long weekend.  We took 2009 and 2010 off because we both had babies and it just wasn't possible.  Then, last year, we took a trip at the beginning of summer to Savannah, GA and had a BLAST.  You can read that blog post here.  This year, we started planning in, like, December where we wanted to go.  Because of all of the craziness from the trip Matt and I took to Atlanta with Aflac, we each had a plane ticket voucher to use (remember?).  This is what started us talking about going somewhere farther away.  After talking about it for what seemed like forever, we finally settled on California.  We planned to go to San Diego/La Jolla for 4 days and Los Angeles/Santa Monica for 3 days.


Here's our day 1!
Our flight left at 8:15 am on Saturday, March 31.  We got up SUPER early and were at the airport by 6:00.  We breezed through security, found something to eat, and had about 30ish minutes before they started boarding the plane.  I've only flown once before (when I was in high school) and it was a VERY short plane ride.  Like, 45 minutes.  So to say that I was a bit nervous about this was an understatement!  Flying across the entire country is no joke!!

Waiting at the airport - getting nervous!

SO EXCITED to spend time with my best friend!  She was totally NOT nervous about the flight at all - haha. 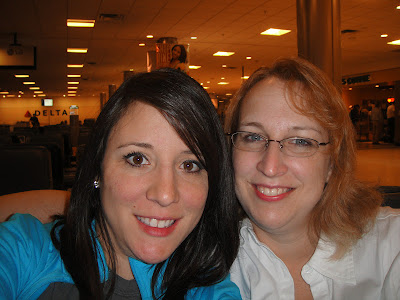 Our plane is here!

When we landed in San Diego, our bodies thought it was lunch time (12:00), but to them it was only breakfast time (9:00)!  It took FOR-EV-ER to get our car from the rental place and I was super starving. Not a fun thing for pregnant girl!  After we got our car, we headed to  Little Italy in San Diego and actually ran into a street market!  Score!  We (finally) found a place to park and started walking around. 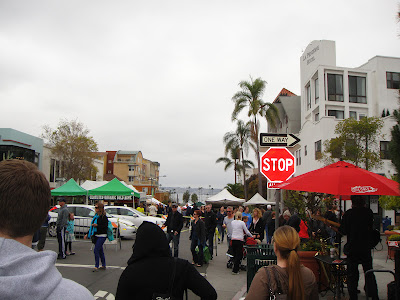 Don't I look super pumped?  I was STARVING and I needed food fast! 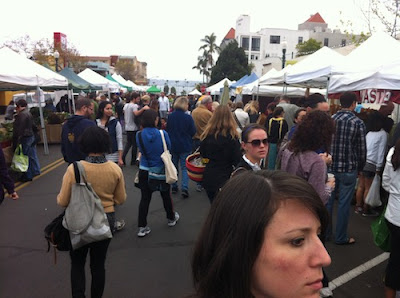 First on the agenda was finding food!  (By this time - my body thought it was almost 2:00!).  We found a panini maker and placed an order.  I got one the that had an egg, bacon, cheese, basil, and spinach.  It was good, but it had WAY too much basil for my liking.  Once I picked most of it off, it was great! 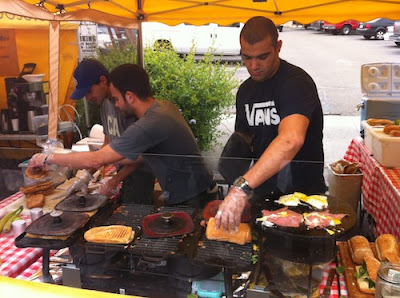 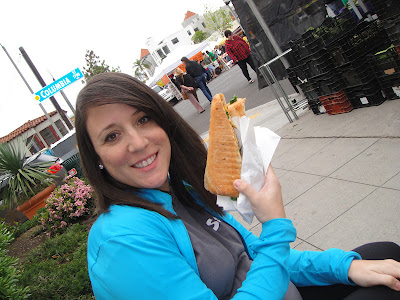 We walked around the street market for a while, but I was SUPER tired.  We decided to head to La Jolla and find out hotel.  It was almost 12:00 CA time by now, so we were hoping that our hotel would just let us go ahead and check in early.  Our room wasn't ready yet (we stayed at the Grand Colonial in La Jolla), so we decided to walk down to the beach for a little while (it was only a block behind our hotel).  Laura had been telling me about this place in La Jolla called Seal Beach.  Basically, a long time ago (like, in the 20's) they built a big wall around this cove to try and protect it from the waves.  They wanted a place to be able to take children to play that was not as exposed to the ocean.  Then, Sea World started releasing all of their rehabilitated seals from that location.  The rehabilitated seals mixed with the regular seals in the area and started making it their home.  Now, hundreds of seals live there.  It's super cool!

You can see Seal Beach behind us and to the left a little. 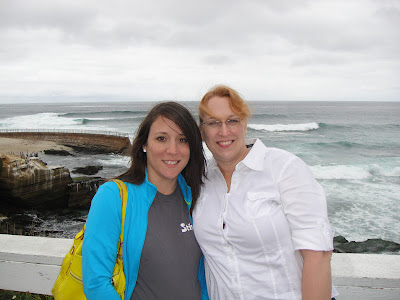 This was about as close as the got to the seals.  They're still pretty wild and definitely kind of mean!

There weren't a ton this day, but there were still a good bit! 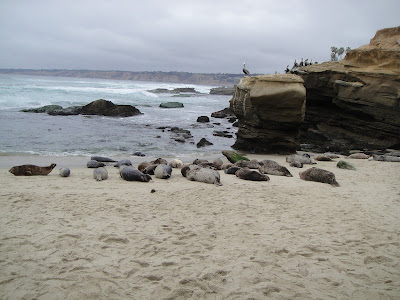 They looked SO funny (especially when they tried to move on land).  It's kind of like somebody pulled a cruel joke on them because they can't use their arms to help themselves move on land at all - they're not long enough! 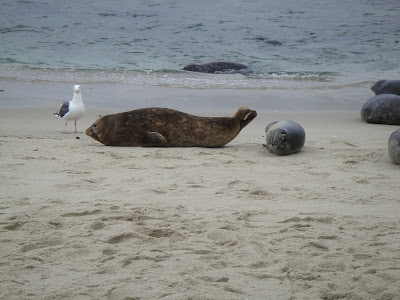 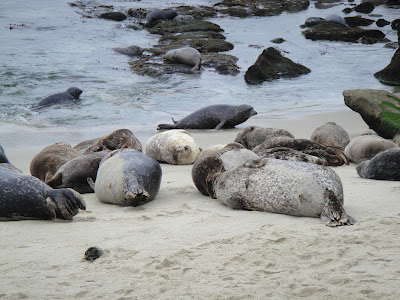 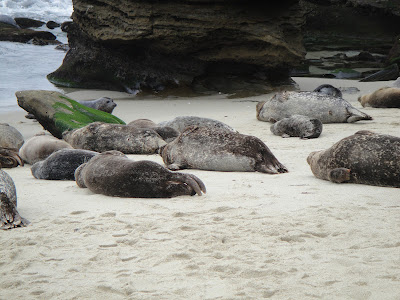 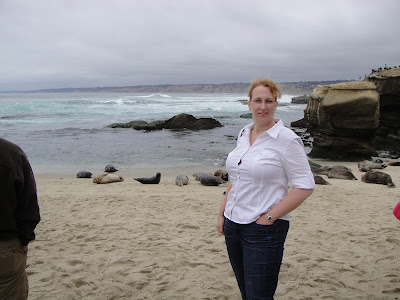 View of Seal Beach from the top walk way. 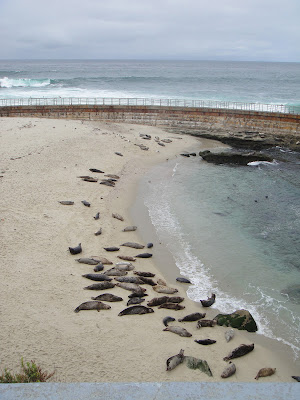 After hanging out at seal beach for quite awhile, we started the grueling trek back (uphill) to the hotel.  Once we got there, I was for sure needing a break.  It was bout 2:00 and our room *still* wasn't ready, so we just hung out in the lobby for a while.  I know you've probably noticed by what we're wearing, but it was SUPER chilly that day.  It said it was 60, but it really felt more like 50.  We were both freezing.  It was nice to sit in the warmth of the hotel lobby, and I even snuck in a little nap.  ;)  About 2:45 they came and told us that our room was ready - yay!  It was soooo cute and cozy - we LOVED it!  It faced the road and all of the shops in La Jolla, so we loved keeping the curtains and windows open and being able to hear everything that was going on outside.

Napping in the hotel lobby - haha. 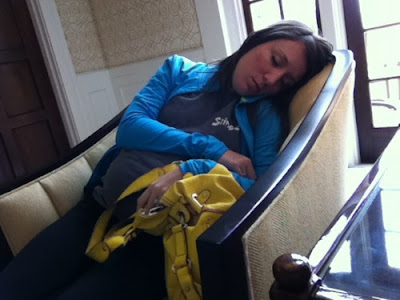 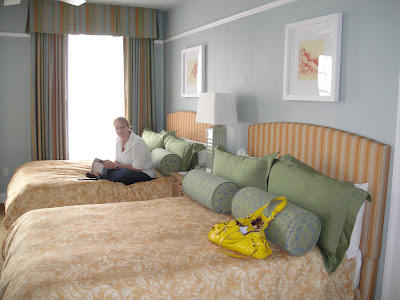 It had the cutest little bathroom! 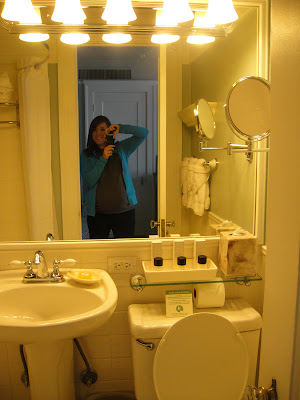 We stayed in the room for a few hours to let me take a little nap and rest a little bit.  Then, we decided to walk around La Jolla a little bit and find something to eat.  We looked on yelp.com (our bff for the trip!) and decided to go eat a Burger Lounge.  It was only a few blocks from the hotel and we passed nothing but shops along the way, so we enjoyed the walk there! 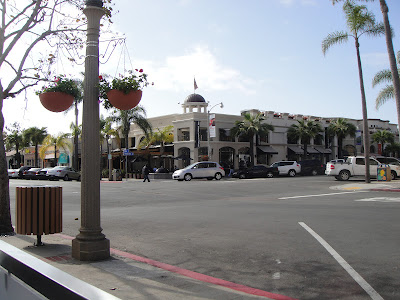 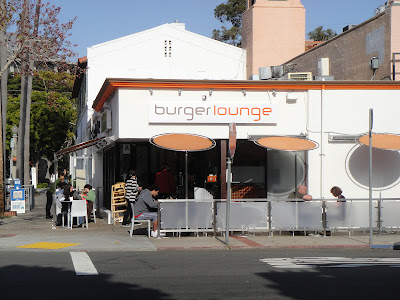 Even though it was still pretty chilly, we sat outside to eat.  They turned some outdoor heaters on for us, but they were so hot that they started burning our faces/heads!  They turned them off pretty quickly and it actually just felt nice outside. 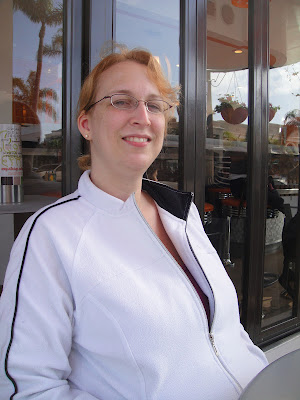 I was hardcore craving an ice cream float, and this one didn't disappoint!  It was amazing!  What was funny was that the coke that they served was all Mexican coke - we were definitely close to the border! 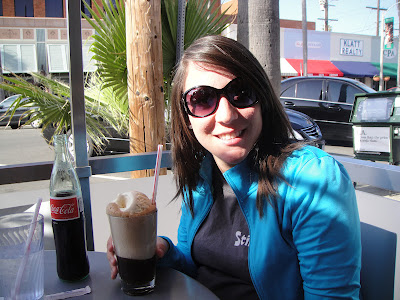 Dinner!  It was seriously the best burger ever!  I'm not typically a huge "fry" person, but these fries were fantastic!  We both really enjoyed this dinner.  What was funny is that it was totally an "organic" place.  They boasted all of these organic ingredients on the menu, and when I asked her for more ketchup, she said, "Okay - I'll bring you some more organic ketchup." - haha.

After dinner we just enjoyed our walk back to the hotel and looked in a few shops.  Here's the view of the beach from the road right next to our hotel.  It was so pretty!!

One of the shops that we stopped at was a super touristy t-shirt shop so that I could get a shirt for LL.  While I was in there, I fell in love with this shirt (you can't really tell - but the neck of it is HUGE) so I got it.  I took this pic to text to Matt.  I was just happy it fit over my belly - haha.

You are going to LOVE San Diego and more so La Jolla! I went a few years ago and still think of it often! Your pictures are great, too. I feel like I am there with you!

Have a great trip!!

So fun!!! Those seals are awesome and I love your shirt!