We never got around to doing a 4D ultrasound with LL.  Honestly, we knew they existed, but we just didn't know a whole lot about being pregnant!  We were the very first of our friends to go down the parenthood journey, so we were really kind of "alone" in figuring it all out.  I remember us talking about it a few times, but we just never ended up getting it done.


When we got pregnant this time, I knew for sure that we wanted to do it.  After losing a baby, I just felt like I wanted to know as much about this baby as possible.  We had SO many questions after the last pregnancy that will never be answered.  That unknown was hard.  Along with it came the desire to not feel that way with this baby, even though he is completely healthy!


I knew that Emily was happier with her 4D ultrasound with Kye at 27 weeks than she was with Brittlynn at 29 weeks.  I made sure to call when I was 24 weeks in the hopes of scheduling one sooner rather than later.  When I called, sure enough, they tried to talk me into having mine done between 30-32 weeks.  No, thanks!  I knew from Em that it was not a good idea AND I know that Baby C has been consistently measuring big.  Even though they weren't very happy about it, I scheduled it for 28 weeks.


One thing that Matt and I had been talking about was inviting all of our mom's (there are 3!) to come with us to the ultrasound.  We've never invited them before and I knew they would love it.  Typically (like with LL) you only get 2 ultrasounds here (at 18 weeks and 32 weeks) so it's hard to want to share those special moments when you don't get very many.  With Baby C, we've already gotten 4 ultrasounds (7, 10, 18, 20), and we still have one more (32 weeks).  When we asked them to come, they were all so excited!


Of course, our little stinker was NOT in the mood to have his picture taken.  He had his little arm across his face almost the entire time!  We also found out another piece of interesting news - he is currently breech!  This really shocked me because at my appointment two weeks ago, Marie said he was head down!  I realize that he's still got room to flip, but I really figured if he was head down at 26 weeks that he would for sure be staying that way.

This is one of my favorite because you can see his little lips all puckered out.  :) 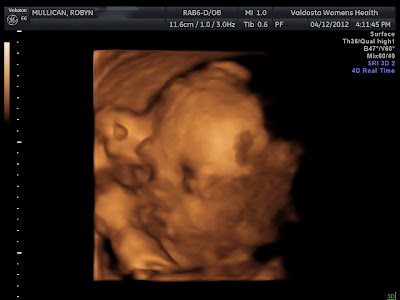 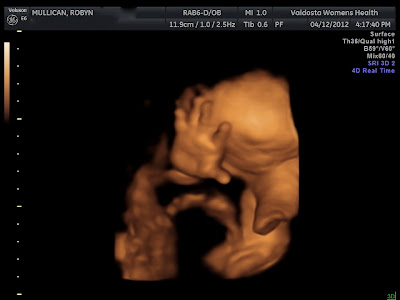 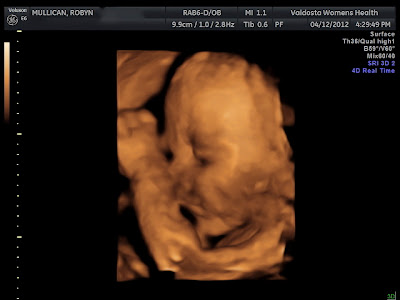 Stretching his little neck out and puckering those lips again. 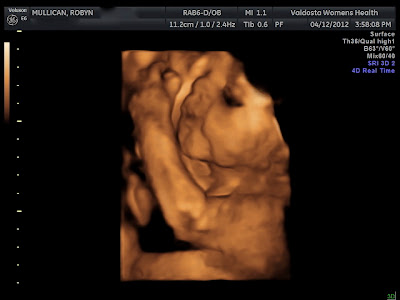 This is pretty much how he looked the ENTIRE time.  His arms were crossed like this in front of his face for 99% of the pictures. 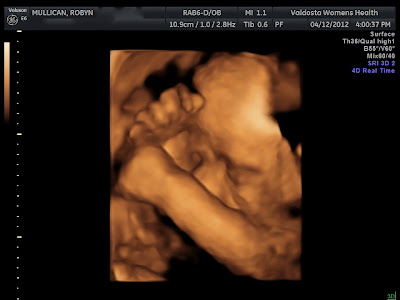 This one is kind of freaky because most of his head looks like a black hole, but I love how you can see his perfect little profile.  He has his Daddy's nose, that's for sure! 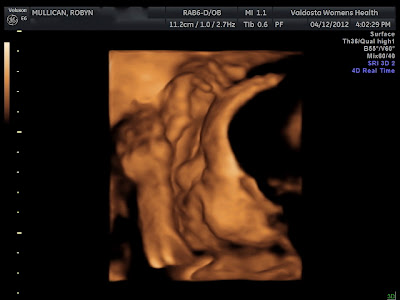 His feet (upside down and pointing away from the camera). 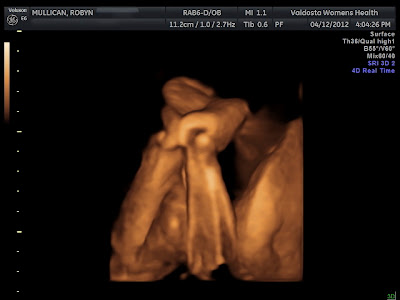 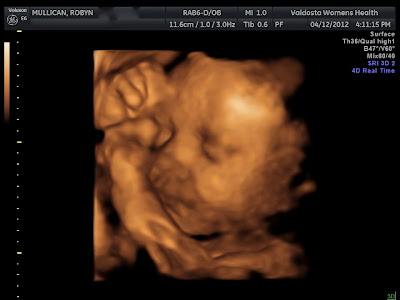 One last one of his little puckered lips.  :) 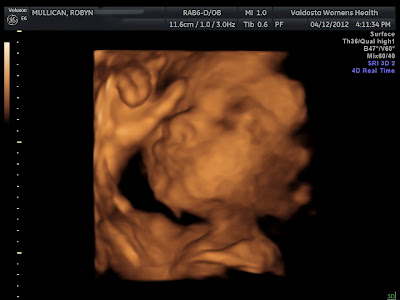 Even though his arms were in front of his face for the majority, this was a great opportunity to see him.  I can't wait to meet him and person and see if he looks anything like these pictures!

Aw!!! Lovvvvve his fingers! I want to go back and compare my kids to their ultrasound!

You should do a side by side comparison of both of them! You know how I LOVE those!!!