Baby Growth: Baby Mullican is a little over 5 inches from crown to rump and weighs about 5 oz.  The baby is about as long as a pencil and as plump as an avocado.  This week, the baby isn't doing any tremendous growing, but is instead learning how to utilize the brain to move the body.  Slowly, the baby's movements are becoming more and more purposeful.  This is also the week that baby starts to put some fat on that little body - meaning that I'll probably start putting on the pounds, also! Can somebody tell me why in the world this poor baby has a gigantic nose?  That's terrible! 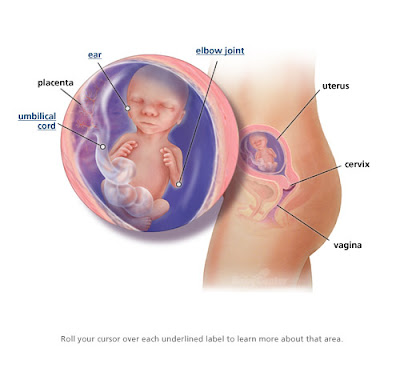 My Symptoms:  My nausea is still present in the early morning.  And I’ve mentioned before that I have to get up at 5:30 when school is in, so this isn’t the best of combinations.  I didn’t get sick this week, thank goodness.  I felt like I was going to on Saturday morning, but never actually did.

I’ve started having more headaches than before, but I’ve found that if I take some Tylenol and drink a little caffeine, they go away immediately.  I don’t mind them as much if I have an easy trick to get rid of them!  I’ve also had some moodiness this week.  Nothing too terrible, but still some moments where I feel like I don’t have control over my emotions.

I’ve still got a good bit of energy this week.  I’ve been getting TONS done around the house.  Some nights I’m pure exhausted by about 9:00, but others I feel perfectly fine and have to make myself go to bed!  My belly still feels terribly heavy and I think this isn’t going to go away.  My back also hurts pretty much all of the time.  If I stand for longer than about 5 minutes, it hurts like crazy.


Weight:  Alrighty, so the scale says I’m back to my pre-pregnancy weight.  So that means that I’m sitting right at 0 lbs gained/lost.  Honestly, I think that the majority of this has to do with the fact that I’ve been mega constipated the past few days.  I think if I was “regular” right now, I would still be down about ½ a pound.  I guess we’ll see next week!  The good thing is, even if I gain 1 lb per week from here on out, I’ll only gain 23 lbs.  Not too shabby!  I gained 25 lbs with LL, and I don’t want to go over that with this baby.


Belly Pictures:  Here the first pic of me in maternity clothes! 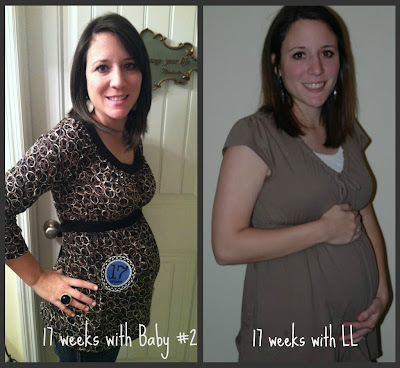 Gender: I'm 100% team girl now - no changing my mind!  We should know in a few weeks!  Have you picked a team yet?  Go to my gender baby pool (and giveaway!) HERE.
Maternity Clothes:  Thanks to several AWESOME friends, I now have a plethora of maternity clothes.  I had two really sweet friends bring me a huge bag of clothes each and another friend who should be bringing me some soon.  Isn't that amazing?  I'm blessed to be surrounded with some awesome girls!  Most of the clothes are more wintery (which is good for now), but I'm going to be lacking more in the summer department when it gets here.  A portion of what I have will translate into summer, but I'm sure I'll need to pick up a few things myself.  But at least for now, I'm good!  I did start wearing some maternity dresses this week simply for the fact that they are SO much more comfortable!  I'm still fitting into my regular clothes fine, they're just not as comfy.  I'll probably start alternating between regular and maternity from now on.  I'm holding off on maternity pants for as long as possible because I HATE them.  I'd prefer to just use a bella band and my regular pants instead.  I'll tell you something though, there's no denying that I have a belly, but it is MUCH more pronounced when I put on something maternity!  It's crazy!


I’m still in regular clothes about 80% - 90% of the time, but I have started wearing some maternity dresses.  This is simply for the fact that they are so darn comfortable.  I probably could get away with not wearing anything for the next week or two, but it’s just so much more comfortable.  I would imagine that I’ll keep wearing a mix of regular/maternity for awhile.

Movement:  I’ve been feeling the baby a TON lately.  The movements still aren’t that much stronger, but I’m feeling them more often.  All of my pregnancy stuff says that the first movements that you feel are usually described as feeling like you have a butterfly in your stomach.  Not me.  Usually, I only feel thumps and rolls.  Monday at school, I was sitting at my desk during my planning time, and it LEGIT felt like a butterfly against the wall of my stomach.  It was so cool!  It’s still not nearly strong enough to feel on the outside yet.


Sleep:I seem to alternate between sleeping very well and sleeping terribly.  I’ll have a few nights of GREAT sleep followed by a few nights of TERRIBLE sleep.  I’ve been wanting to sleep on my stomach SO BAD lately, but I definitely can’t do that at all anymore.  I always go to sleep on my side, but I often still wake up on my back.  I’ve been having really vivid, crazy weird dreams lately also.  I’m sure that that contributes to my sleeping poorly.


What I Miss:Probably the biggest thing that I miss is not having my back hurt.  It pretty much hurts all of the time.  While I’ll gladly deal with it (SO worth it!), it does wear me down after a while.  I try not to say anything to coworkers, friends, family, or even Matt about it, but it’s pretty much a constant pain for me.  I better just get used to it, I guess!


What I'm Looking Forward To:We have LL’s 3 year pictures coming up this weekend and her birthday party the weekend after that.  I’m getting SUPER excited about both!


Cravings: Orange juice – STILL!  I tend to go through an entire container in a week.  I only drink one glass a day because I don’t want heartburn and it has a ton of sugar, but that glass tends to be pretty big.  J  I also craved Chinese food this week and when I finally got some, it was SO GOOD.  I loved it.  One thing that has really surprised me this pregnancy is that I’ve been craving something that I’ve never had: sushi.  I’ve had the cooked kind, but never the raw, but I’ve been craving it ALL!  Obviously, I would never eat raw fish while pregnant, so I really just try to ignore the craving.  The other night, Matt got himself some sushi for dinner, and it was a sampler platter that had a little bit of everything.  It had a few shrimp rolls in there that looked SOOO good.  It was a crab/avocado/cucumber roll with a little bit of shrimp on the outside. I totally couldn’t resist and ate ONE piece (don’t worry – it was all COOKED!) and I almost died.  I was in HEAVEN.  It was SO GOOD.   I’ve been thinking about it a TON since then and totally want a lot more.  Obviously, I probably won’t eat any more any time soon, but it is for sure on my mind!


Best Moment of the Week: I really don’t know?  We got a call from the preschool we picked and LL is definitely enrolled for next year!  That was pretty exciting!  I also got my plane ticket booked for my spring break trip with my sister – California here we come!


My Concerns or Questions:I need to talk to Marie about several things: 1- I’m thinking about going natural.  I *almost* did with LL (I made it to 8 cm!) and my goal was to do it completely with the next one.  When I got pregnant, I thought maybe I would just do an epidural and not worry about it, but now I’m starting to change my mind about it.  I want to talk to Marie and get her opinions.  2- I was induced last time because I wanted to be guaranteed that Marie would deliver the baby.  I REALLY want to go into labor on my own, so I need to talk to her about if she’ll come in, etc.  3-My back pain. I need to see if there’s anything I can be doing to help it out.


My Goals for the Week: Get all the last minute stuff for LL’s party planned!  I did my huge pile of laundry from last week, but there are still some things around the house that I need to get done.  I need to finish cleaning my closet out – I started, but haven’t finished.  I also need to start going through her clothes from this past summer for the kid’s sale!

I wonder if your nausea is worse in the mornings you teach because you get out of bed quickly? (I am assuming here) Maybe if you wake up to the alarm and sip some water for a second, and then get up? I think of you want to go natural, you could totally do it! I mean if you made it to 8cm before...However, there is no shame in changing your mind either. Also, I have been thinking girl ever since you announced your pregnancy, so I guess I better go place my vote!

isnt that shirt awesome? Totally one of my favs! It looks great on you! I, duh, highly recommend going natural and not being induced!!!