A Day with Kye

The week before Christmas, our friend Zach had to have back surgery.  Emily was a little stressed as to what to do with Kye.  I offered to keep him for the day.  It was the day that we were planning on going to Grammy's house to bake Christmas cookies (a Christmas tradition!), so I knew Kye would probably have a blast.  We picked him up about 9:00ish from their house and made our way to Grammy and Pop's.  The kids had a blast all day!  Lorelai is a bit of a bully (horrible, I know.  But we're working on it), but she really did get a lot better as the day wore on.  Here's what we did:

When we first got there, we decided to just let the kids play with LL's toys for a little while so that Kye could just get adjusted to being somewhere new.  Kye LOVED riding all of LL's cars and he didn't seem to mind a bit that they were all pink.  :) 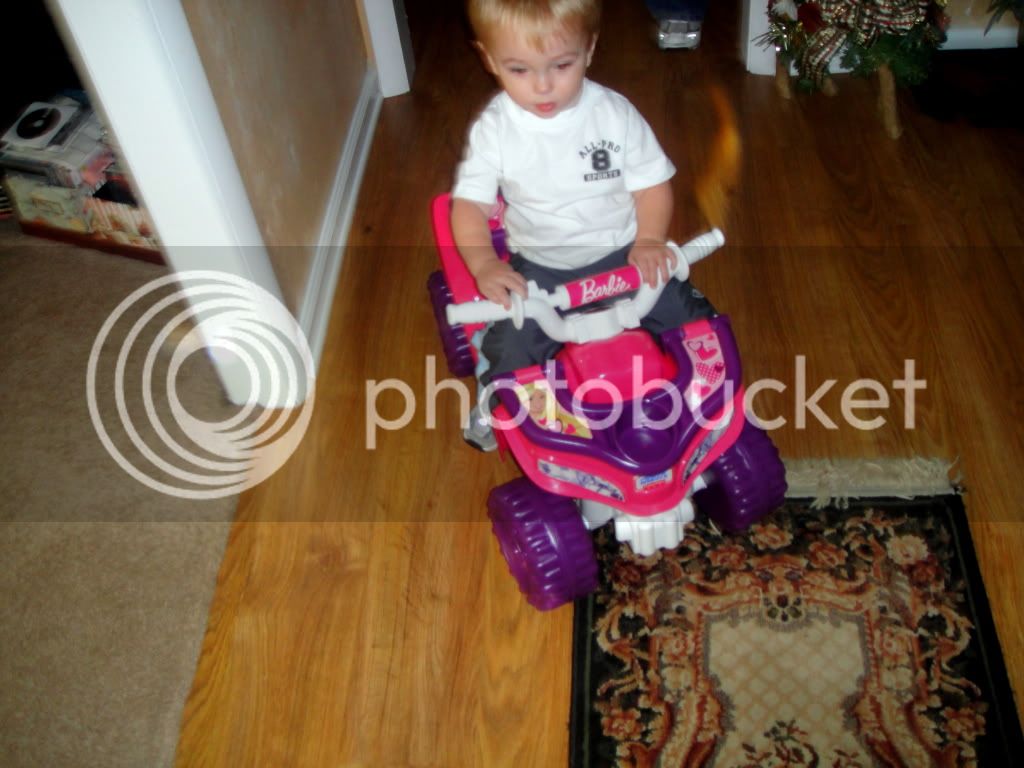 Sometimes they chose to play together.

And sometimes they chose to play separately. 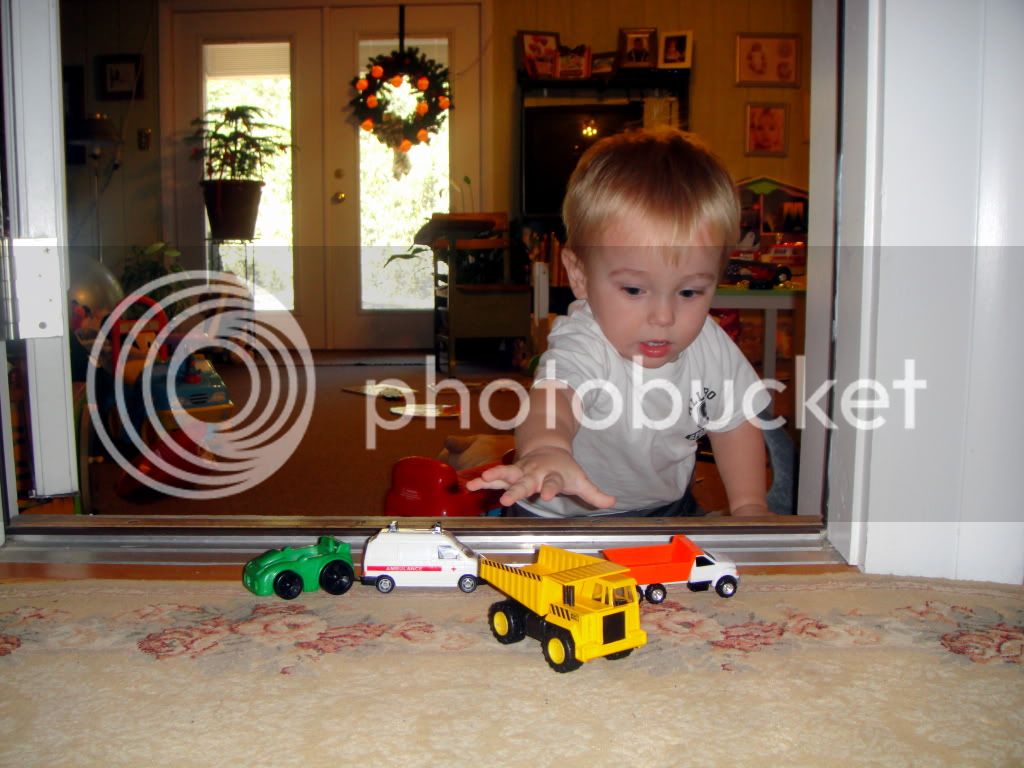 After they got some good play time in, Matt occupied them with the first little bit of Toy Story while Grammy and I got all off the cookie stuff together.  Kye was BEYOND thrilled at this part of the day!

Finally it was cookie time!  Both Lorelai and Kye did wonderful at helping bake the cookies!  I also took tons of videos so that Zach and Emily could be a part of this day!

It's a Mullican tradition to put flour on your nose when you bake.  Matt and I have a picture of us with flour on our noses from when we were dating.  It's so cute!  Kye is now a part of our tradition.

After putting the cookies in the oven, it was time for a little lunch, a quick potty, and nap time!

When they got up from their nap, it was time for a little bit more play time!  LL was NOT a fan of Kye riding in her car.  She kept crying and saying "share!" every time she was in it.  She doesn't quite get that she has to share, too.  They finally came to a good agreement on their own - LL rode (and read!), while Kye pushed (and often mowed).  It really was SO cute and they both were happy!

Finally it was time to decorate and eat Christmas cookies!  They worked out another good arrangement on this - Kye put sprinkles on, and LL took them off and ate them.  :)  Kye was SO precise at what he was doing, too!

We decided to take them outside to play a little bit.  I know it's kind of random, but LL LOVES to ride in the wheelbarrow at Grammy and Pop's house.  She does it all the time.  So that's what we did with the two of them.  We couldn't stay out very long because it was pretty cold, but they did get some fresh air and sunshine in.

Stopping to play with rocks and say hey to Bo. 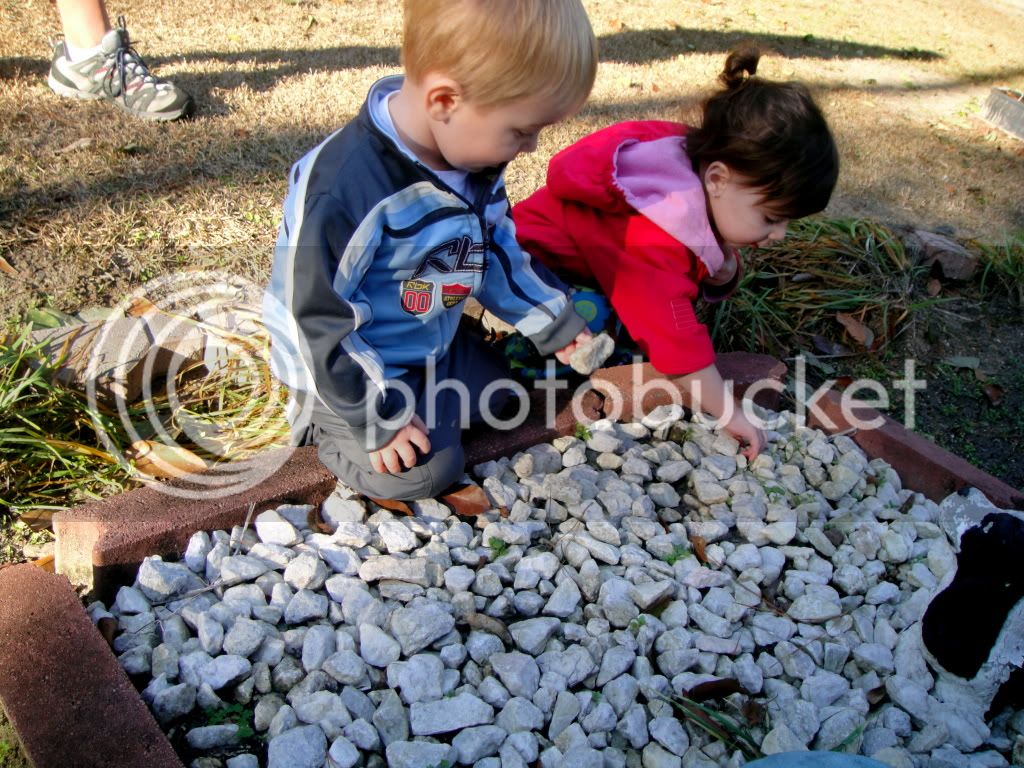 Time for dinner!  Mrs. Becky asked me what I wanted for dinner and I said jokingly "Filet Mignon, baked potatoes, and a Caesar salad."  It was totally just being a smart alec.  Then she said, "Actually, we have that!"  For real!  Except instead of a baked potato, she had TWICE baked potato!  So funny!  So we had a pretty awesome dinner.  And Kye absolutely loved the steak!

And finally, a cute little video of Kye playing a "where's my sippy" game.
We really did have the BEST day!  Kye is so sweet and so well behaved.  It's so funny how he and LL are completely different.  It's neat to spend the day with someone else's child and see their personality.  It sure was a blast and we'd love to have him again!