Monday - May 24
My first official day of summer! Lorelai and I went and met with Gigi on the base to have lunch. Gigi LOVES showing LL off (duh! she's a grandma!) and we always run into people she knows, so it's fun for everyone.

Tuesday - May 25
I spent the morning packing and getting everything ready for us to leave by the time Matt got off at 2 to go to Atlanta for the rest of the week. We left as soon as Lorelai woke up from her nap. She did so good! I am so proud of her! Our portable DVD player broke a couple of weeks ago (it will turn on, but it won't "read" the DVD's. Grrr.) so I was a little nervous about what to do if LL melted. We borrowed Grammy's laptop for an emergency meltdown.


Ready to go! Somehow her sleepy blankets got put near her car seat, so what's the first thing she grabbed? Yep. All 4 of them.

Trying to get Daddy (he was pumping gas) 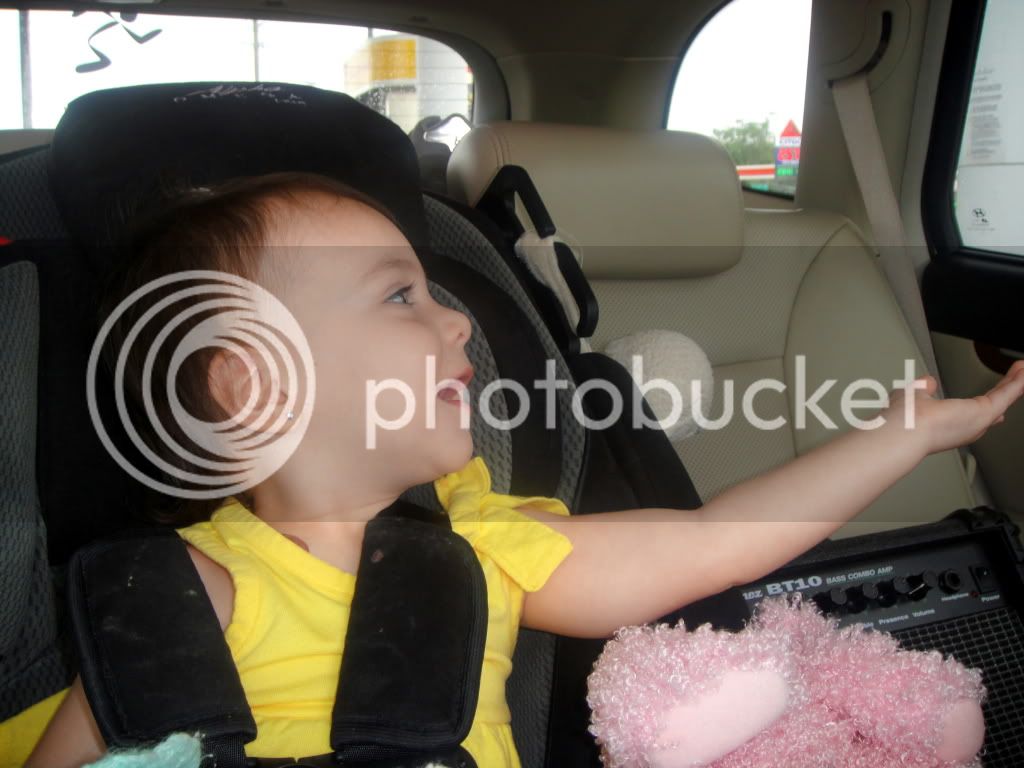 We also had a new plan - instead of driving straight there as quickly as possible, we stopped for dinner to let LL eat and stretch and have a little break from the car ride. This was a great idea! We stopped at The Truett Grill in Jonesboro, which is like a restaurant Chick-Fil-A. It was the only Chick-Fil-A we could find once it was dinner time. It didn't have a kids play area (bummer!), but it still did the trick.

Sharing tea with Daddy (this does NOT happen often!)

We ended up getting to Oma and Opa's around 7:00is which is usually LL's bed time.We only had to play an "emergency video" for the last 5 minutes or so before we stopped for dinner, and the last 5 minutes before we got to Oma and Opa's. Awesome! We decided to let her stay up a little later because I knew that there would be no way that she'd just let us walk in and put her in a strange crib and expect her to just go to sleep. Well, even letting her stay up until 8 and get used to where she was was still harder than I thought it would be. Even when we put her in at 8, she had a huge meltdown. We didn't get her to sleep until almost 9 and we had to hold her to sleep - which we have NEVER done for nighttime - not even as a tiny baby!

Wednesday - May 26
Matt and my Dad got up early Wednesday (like 6!) to go fishing. My dad lives only about 5 miles from Lake Lanier and he just bought a pontoon boat recently, so Matt was really excited to go fishing. Mrs. Connie and I just kind of played with Lorelai for a bit, and we were going to meet the boys for a short boat ride, but I wasn't feeling too great, so we opted out of the boat ride. We went for a walk through their neighborhood and LL LOVED it. She loves to be pushed in her stroller and it makes me wish even more that it was possible for me to do that around our house. But we live on a dirt road (that's out!) and the paved road closest to us is a crazy busy road (that's out!) so it's a no-go for home. Boo.

The boys came back close to lunch time so we all sat down for lunch together. Then it was nap time for LL. While she napped, Matt and I left her with Oma and Opa and we drove to the Mall of Georgia to do a little shopping. We went to Charlotte Russe (my fav!) and Old Navy and just had a good time looking through all the shops. We also bought LL a Mickey Mouse (or a "Key" as she calls it) from the Disney Store. She has one of these at Grammy and Pop's house and she LOVES it. So now she has one for home, too. :) We got back to Oma and Opa's around 4 and started getting ready for dinner. Since I didn't get to see them for my birthday, they offered to take me out to a belated birthday dinner. Where did I pick? Olive Garden! I totally know that there are 3216878 awesome places to eat in Atlanta, but I NEVER get to go to an Olive Garden and it's one of my favorites, so that's where we went! 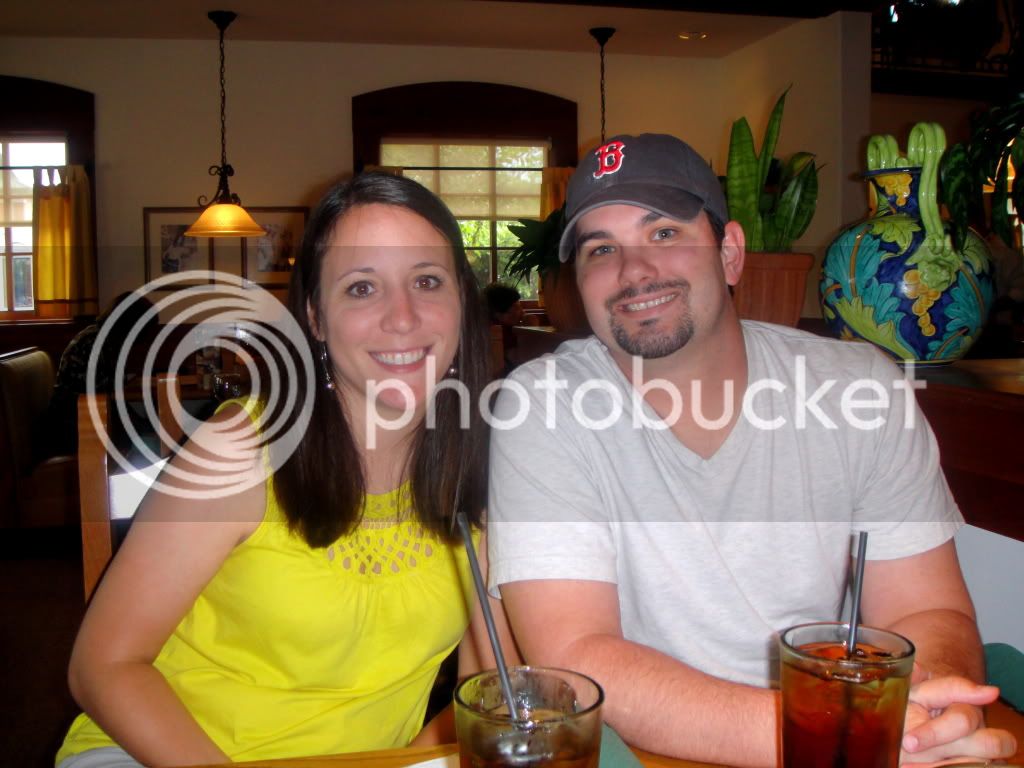 After dinner all the girls went home while the boys went to Bass Pro to get some stuff for fishing the next day. Uh-oh moment: When we got home Oma realized that she didn't have a house key! So we couldn't get in! It was time for LL's bath and bed and she desperately wanted some milk, so we had a problem. I spent the next 20 minutes calling Matt to tell them to come home, but guess who wouldn't answer his phone? Yep. Great. By the time they made it back, LL was m-e-l-t-i-n-g. No fun. But it was all great once we got inside. Lesson learned - Oma won't do that again! :)

Thursday - May 27
Thursday morning the boys decided to go fishing super early again (hello! vacation! crazy!). Oma still gets up mega-early from years and years of getting up at the same time, so she offered to get LL when she woke up and let me sleep in. Yes, please! I totally took her up on that offer and I think I slept until 8:30 or 9:00. All I know is that it was awesome! I haven't slept in (other than being sick) since about the middle of my pregnancy, so it felt GREAT to do it again.

Once I got up we all got ready and headed down to meet the boys at lake. I was nervous about how LL might react to the whole situation (I mean - life vest, lots of wind, noise, vibration, etc) but she did AWESOME. She absolutely loved being on the boat. We stopped next to a little island for a couple of minutes and fed some geese that swam up to the boat. As soon as she saw them she said, "duck" which is not a bad association for a 15 month old to make! We only stayed out for a little over an hour because it was getting close to lunch time.

Lorelai and Oma waiting on everybody else to get on the boat. 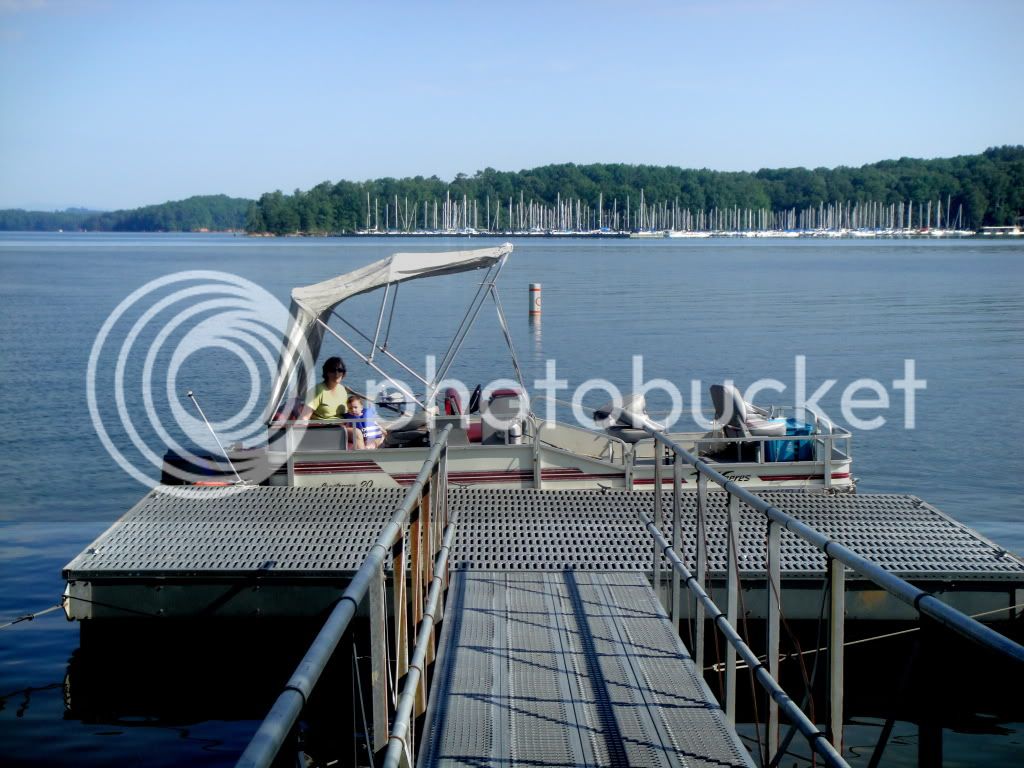 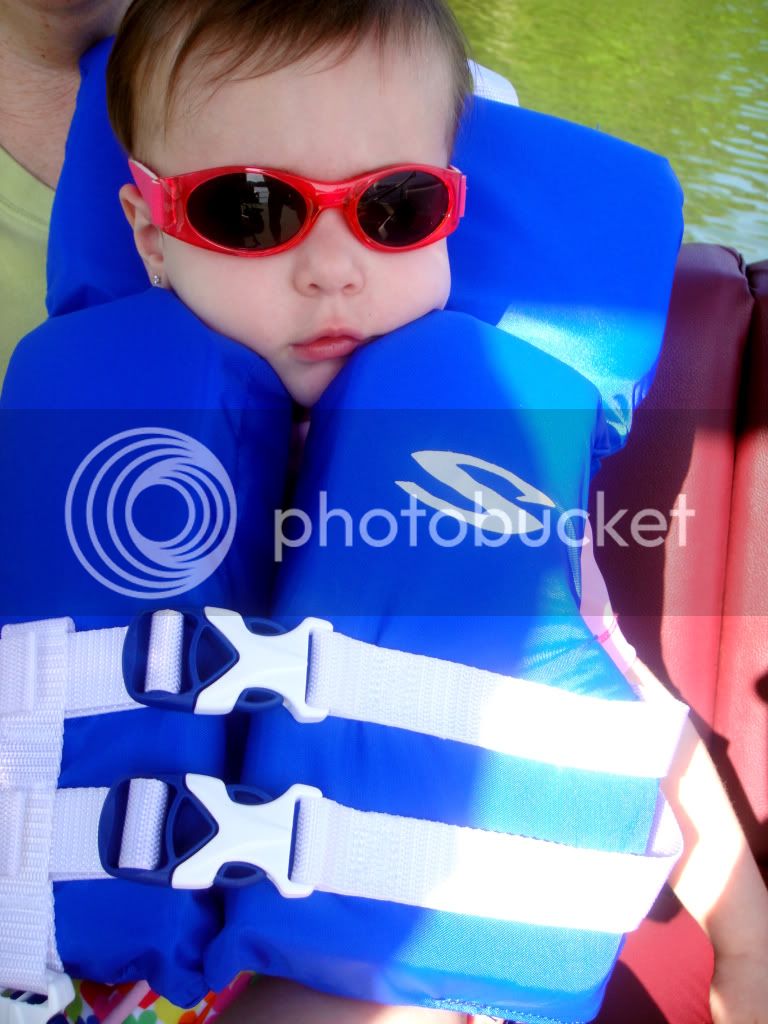 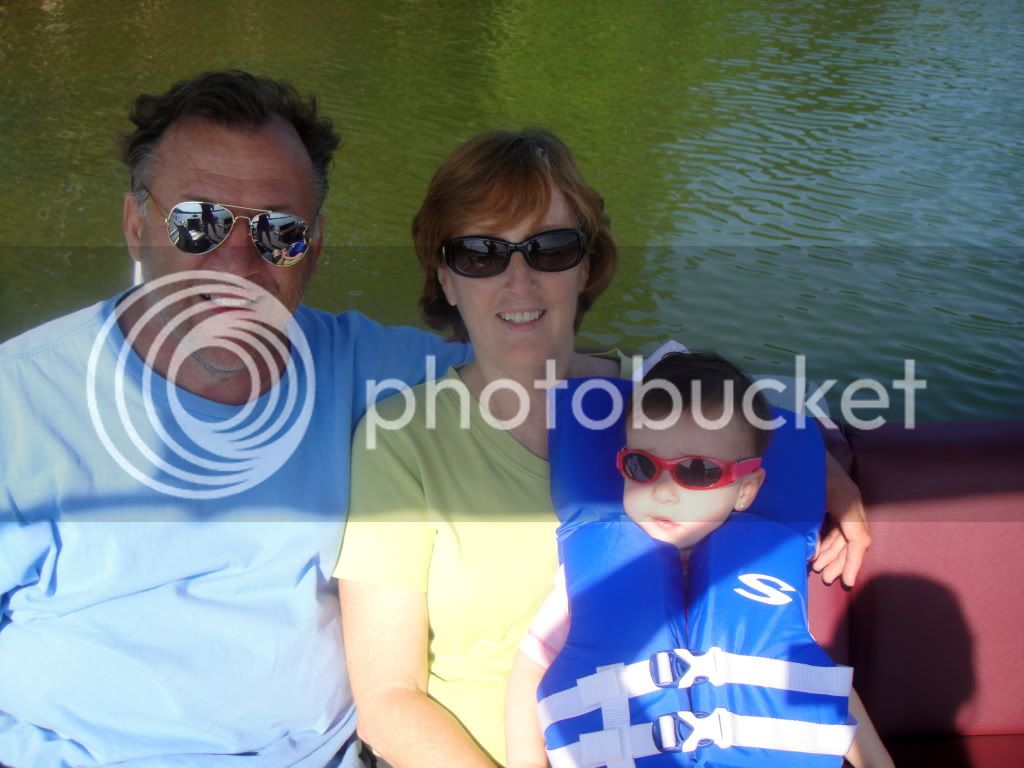 Driving the boat with Daddy.

We went home, ate lunch, and put LL down for a nap. Then Matt and I got ready to go out for our anniversary. Our anniversary was on the 22nd, but we decided to wait to celebrate it until we went to Atlanta so that we could go somewhere really good for dinner (hello Cheesecake Factory!). Before we went to dinner, we stopped by Lenox Square Mall so that we could look for my watch.

Leaving for our date!

Ever since watching The Blindside, I fell in love with the watch that Sandra Bullock was wearing in the movie. We actually ordered it from Steels, but since they've never called back about it, we decided to look for it while we were in Atlanta. It is a Toy Watch - and it was so hard to find this exact one in stores!  We finally found it at Bloomingdales. Score! In fact, when we were buying mine, the saleslady said "Did you see The Blindside?" Kinda funny.

Finally I have mine!

After walking around the mall for just a bit, we headed out to The Cheesecake Factory. I had only been there once before with Emily when we went to see Beth More, and Matt had never been there. Needless to say, we LOVE it! I think it's our new favorite restaurant!

My dinner (be jealous -Em!) 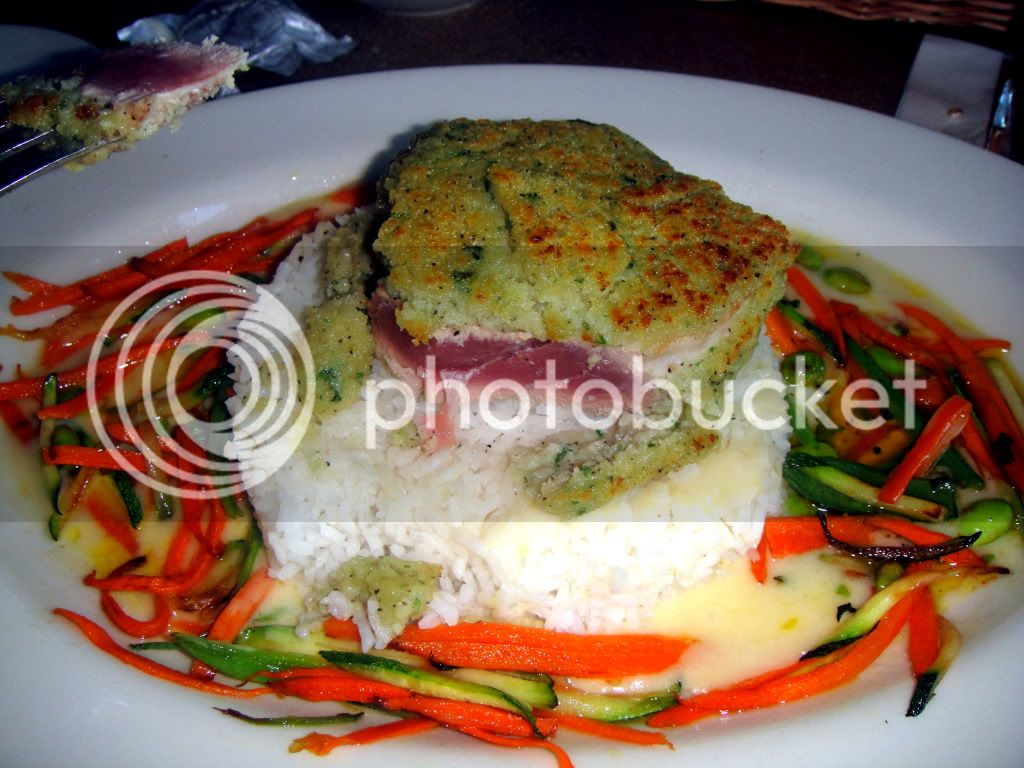 I ordered Strawberry Shortcake for dessert.  I didn't realize I'd get the whole cake. 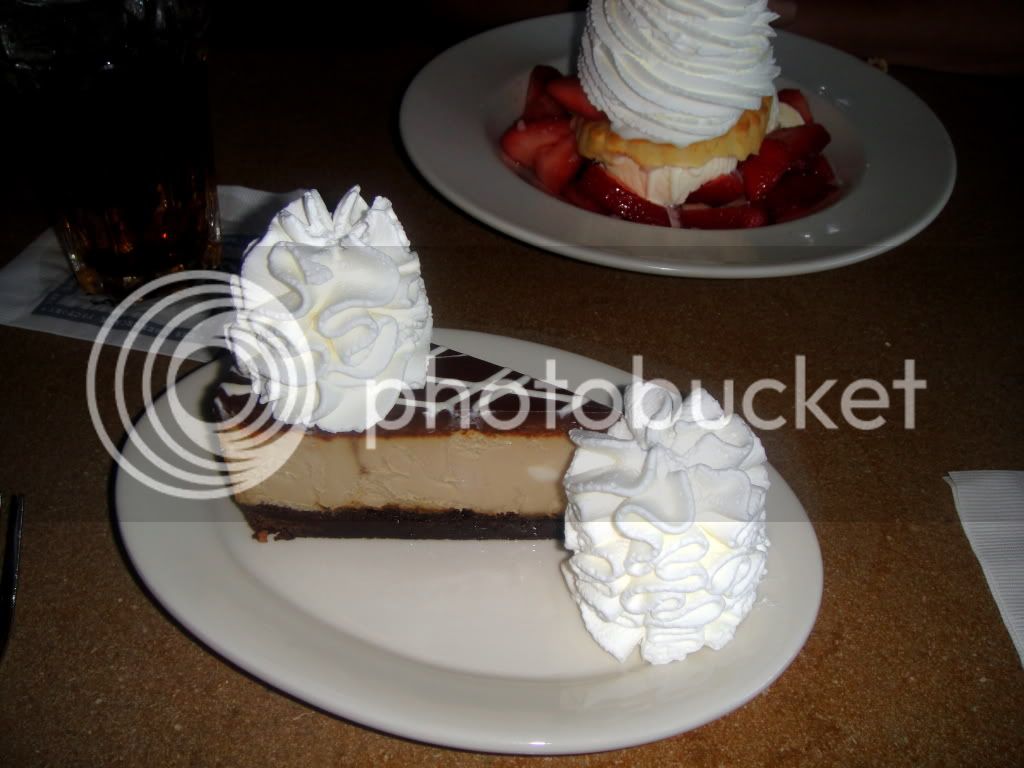 When we left the restaurant, we decided to stop by Laura and Gino's on the way back to Dad's so that we could see them for a little bit. We hadn't seen them since we'd been in town. We stayed for about an hour talking and then headed back to Dad's. It was a fantastic day!

Friday - May 28
Friday morning I got the opportunity to sleep in again thanks to Oma! I think she really enjoyed her morning time with Lorelai, and I know that I really enjoyed my sleeping in time! After we got up a ready, we left LL with the boys and headed to meet Laura for lunch. She was working so we couldn't hang out long, but lunch was a good option. After lunch, Mrs. Connie and I headed to the Mall of Georgia and did some mega girl shopping. So much fun! Sadly, though, I didn't get any pictures of this part of the day. :(

When we finally made it home around 4 or so, we started to get things ready for dinner. My dad was going to grill some burgers and Laura, Gino, and Ben were going to come over for dinner. Just FYI, my dad grills THE BEST hamburgers. I ate 1 1/2 they were so good!

Arthur learned quickly that LL will share her snacks!

I think that it's awesome to see LL and Ben interacting now that they're both a little older. They're still not really "playing" yet, but at least they know the other one exists now - haha. 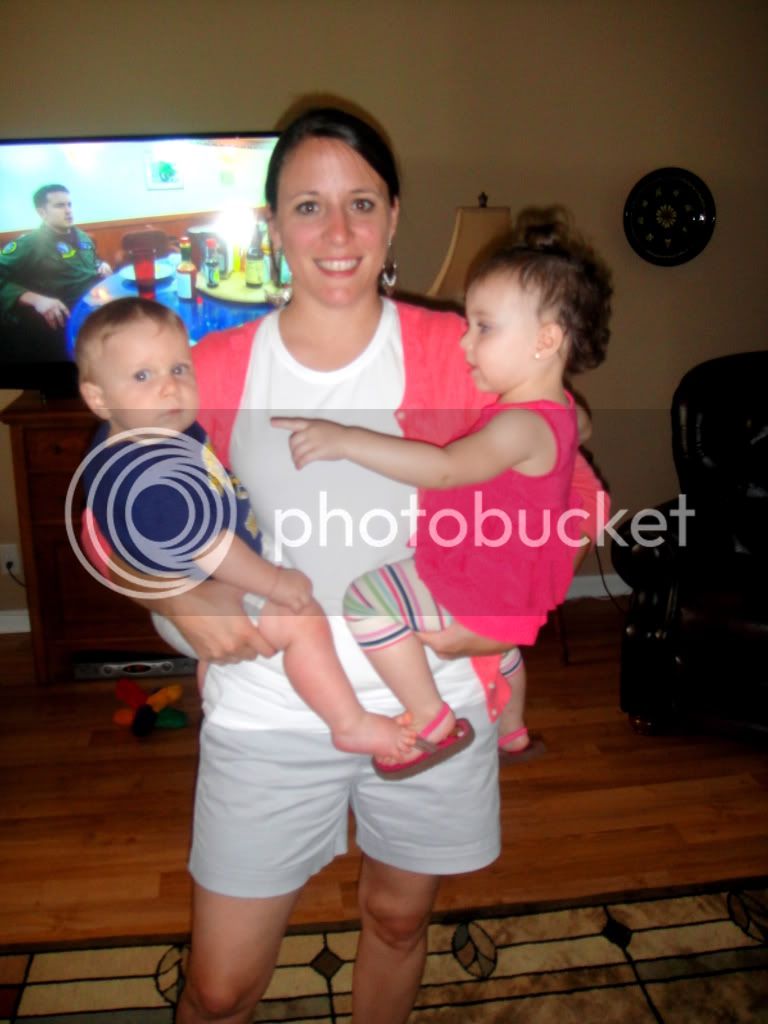 She kept talking to him and gesturing for him to stand up. SO FUNNY! 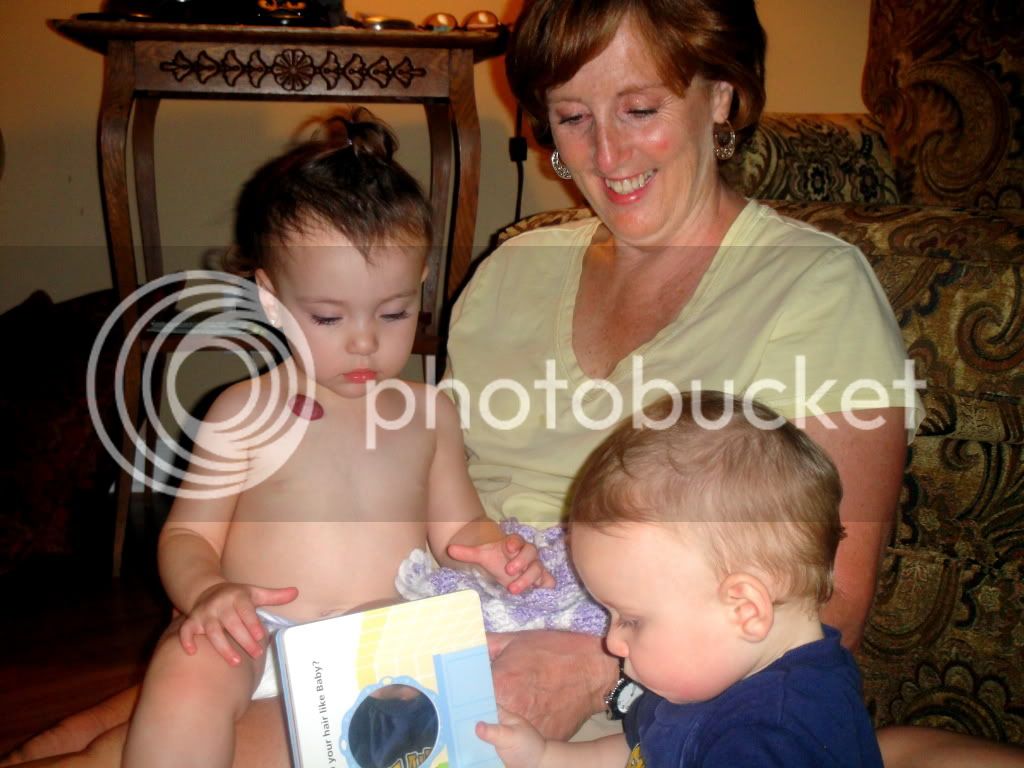 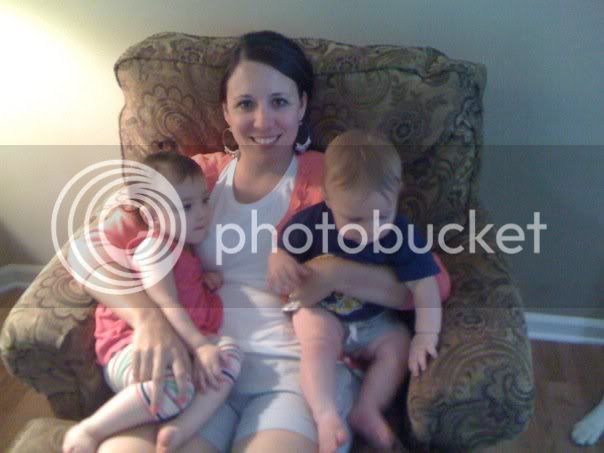 We put them in the bath together and it was soooooo cute! 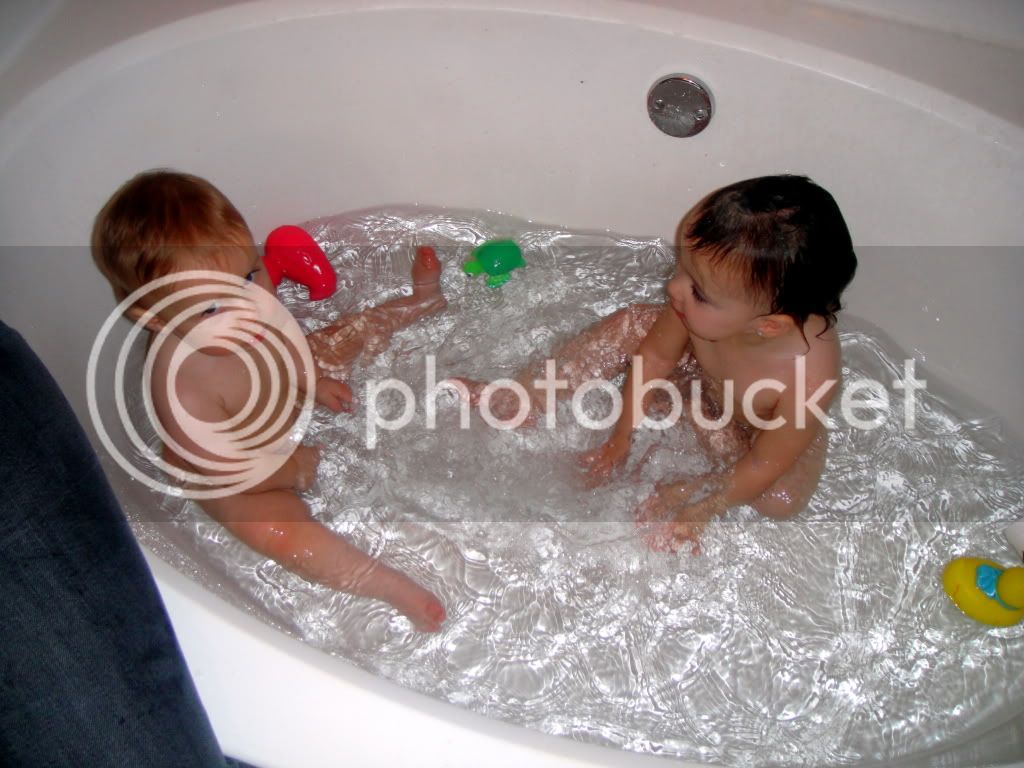 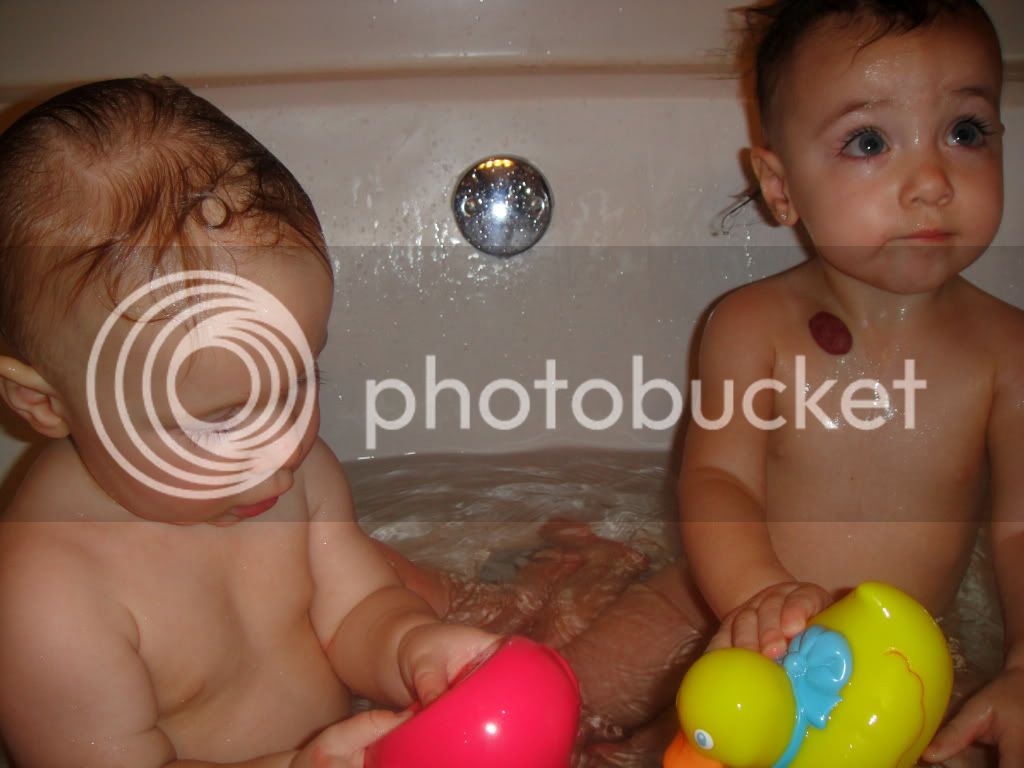 After everyone left and LL was asleep for the night, Matt and I left her with Oma and Opa and we drove just down the street to get a milkshake and walk around the shopping center a little. Matt had been cooped up all day, so he was ready to just get out of the house a little bit.

Saturday morning was our last morning to sleep in! Laura and Ben came over pretty early (about 8:30) and Matt and I were woken up by both babies been thrown on our bed. Pretty cute. :) 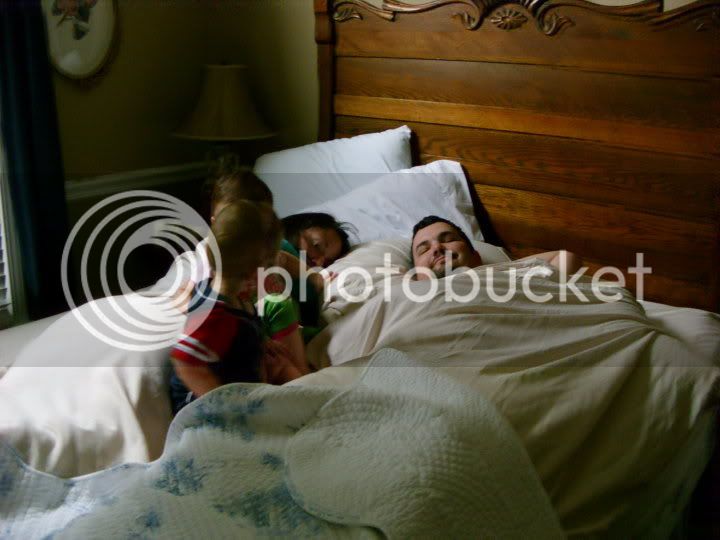 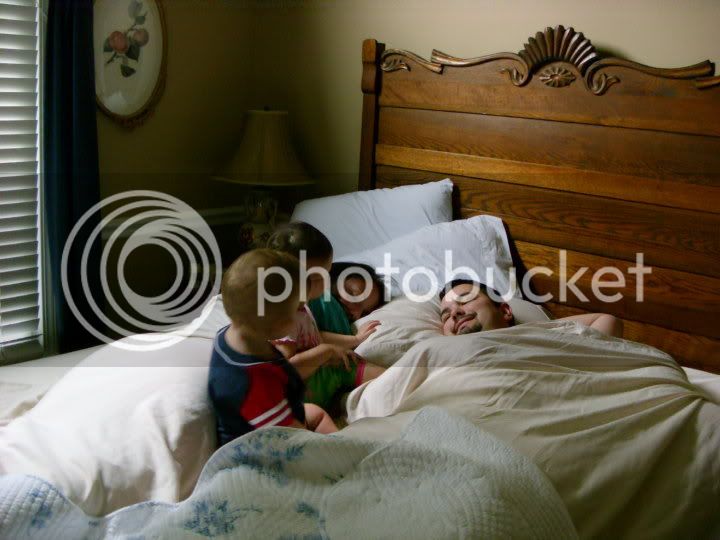 We spent the day playing before it was time to head home. We left for home right after LL's nap about 2:00 and she did AWESOME on the way back. We stopped at the Chick-Fil-A in Tifton to eat and made it home without any issues!

Sunday - May 30
Grammy had been having a meltdown because she hadn't seen LL in over a week, so after church we headed over there to have lunch with them so that they could see her for a little while. We ate lunch, napped, and then I headed to the grocery store. Matt kept LL with him while I went shopping and we all met back up at our house. Matt didn't have evening church because it was the 5th Sunday, so it was great to have him home with us. We're NEVER home together on a Sunday evening.

It was a pretty fantastic week!
Posted by Robyn at 6:56 PM

1. GREAT that she did so good in the car yay!
2. I totally joked to Zach (remember?)that the mickey mouse was Kye's and I bought it at a Disney Store and ya'll did buy it there haha
3. move into our neighborhood so we can go walking every morning (in the summers) together!!!
4. you valdosta born people and olive garden...i don't get it haha
5. my mouth is WATERING from the chicken pic...omg omg omg i want it soooo bad right now!
6. you look great in all the pics...especially the ones with the milkshakes...sexxxxy girl!!!
7. too cute in the bed together!
8. umm totally longest blog post I've EVER seen. makes me feel good b/c sometimes i think mine are mega long and you've beat me :)