This past Sunday, Lorelai turned two months old. We didn't celebrate or anything (other than singing "Happy Birthday" in the car.), but I wanted to celebrate in my own way by writing down things from these first two months that I never forget.

1- Her yawn. When she's really tired, she makes the funniest noise as she's closing her mouth. It's like she's pushing the air out really hard and that plus her closing her mouth makes a "kkkkhhhh" sound. It really is the cutest thing ever. She also has a crooked yawn. When she yawns really big, her chin will point to a side. It's never the same side, but it's always crooked. 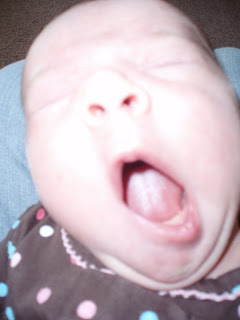 2 - Her stretches. Sometimes when you put her down on her changing table, she'll stretch really big with both arms above her head. One of the reasons that this is so funny is that her arms are barely longer than her head. Whereas my elbows are level with my head, her wrists are level with hers. Mega cute. 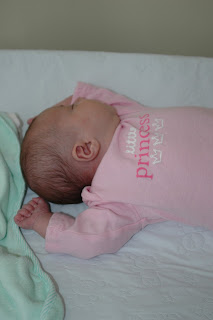 3- Her smile. She started smiling the day after she turned 6 weeks old and it is the BEST thing that has ever happened to me as a parent. She'll smile so big that you can see her toothless gums and it just melts your heart. 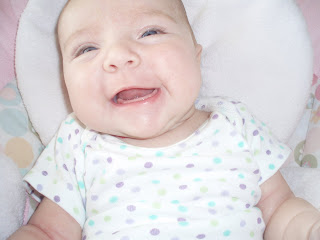 4- Her words. The most recent addition is "goooo". It's just so cute to hear her little voice saying "ahhh" and "coo" and, my favorite, "goooo".
5- When we were in the hospital, Matt and I opted for her to sleep in the nursery and to come into our room at night only to feed. Well, I didn't sleep well in the hospital at all (duh), so any time someone would open our door, I would be awake before they even got to the curtain. Well, this means that I would already be sitting up by the time they started wheeling her in in the middle of the night to eat. This is my favorite memory from the hospital (I was pretty terrified the rest of the time). I would be so sleep, but they would start pushing her bassinet in the room and all I could see was her little hospital hat with her head stretched as far behind her as she could get it. This means that I saw her little hat and then her huge eyes and then just her swaddled body. They always pushed her into the room head first, so she was straining to look behind her. As scared as I was in the hospital, this always warmed my heart. It was like she wanted to see where she was going, but she was also searching for her mom. Those sweet moments in the wee hours of the morning were the best moments in the world. I would nurse her while Matt slept and it was just "our time". I was so scared of her, but those were the times that I felt most comfortable. She never cried, well, she never made a peep, really. Just the dim light, her crazy little chicken noises, and both of our sleepy eyes. That was the best time in the world.
6- Bath time. We give Lorelai a bath every night around 8:30 and Matt and I have a pretty good routine. I go and get the water ready, while Matt undresses her. He'll talk to her and play with her on her changing table until I call "okay - water's ready!". I wait in the bathroom for my favorite chant of all. "Necked baby, necked baby, necked baby!" Matt says this over and over until he gets to the bathroom. He holds her out in front of him under her arms and I hear him saying this as I see the cutest necked baby butt coming right for me. She just looks so darn adorable and has the best look on her face. It's like she's confused. Oh, I love it. Not to mention seeing that necked baby back and butt is the cutest sight in the world. 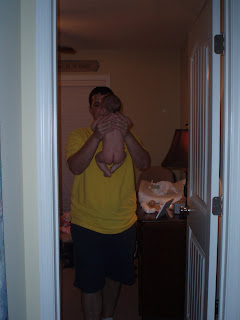 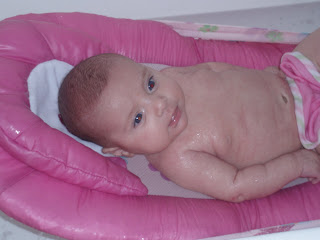 7- Her Chicken Noises. I know that all new babies make funny noises and Lorelai makes noises like a chicken. She has since we brought her home. We're used to them now, but the first night home, we thought she was choking! They're the funniest things. It sounds like when you inhale sharply and make a high-pitched gasping noise in your throat. She's not choking when she does it, and there's no pattern to when she does. She does it when she eats and in her sleep.
8- Tucking her butt and legs when you pick her up. This is one of my favorite things. She only does it when she's been sleeping and you pick her up. She'll keep her legs tucked up to her chest (like the fetal position), arch her back, and her little butt sticks out. I love it when I pick her up and she does this. It's just such a "baby" thing to do and it is incredibly adorable.
9- Mimicking sticking her tongue out. We read in one of her baby books around month one that she would begin mimicking our facial expressions. She never mimicked us frowning or acting surprised, but she will mimic us sticking her tongue out. It used to take her forever to do it, but now it's an almost immediate response when we do it to her. We're starting to do clucking noises with our tongue and we're blowing raspberries to see if she'll mimic that. So far she's mimicked the clucking once (as far as actually making the sounds), but she'll get a really serious look on her face and start moving her tongue all around. She's trying so hard!
10 - Staring at the fan. This girl loves fans. She loves them when they're still and when they're moving. I know a lot of babies will stare at lights, and she does that occasionally (especially when she's tired - it's like she's trying to keep herself awake), but she LOVES fans. She'll just stare and stare and stare at them. It's like they put her in a trance. Sometimes, if the fan isn't moving, she'll stare at it and wave her arm in a circle as if she's saying "Fans go around, make it do it!". I won't be surprised if her first word is "fan!".
11 - Her surprise face. When she's seeing something that's interesting to her, she'll make her mouth a big "0". She doesn't do it as much as she used to, but she still does. I don't guess she's really surprised about something, but it sure looks like it! It makes me laugh sooo hard and I love to see her do it! 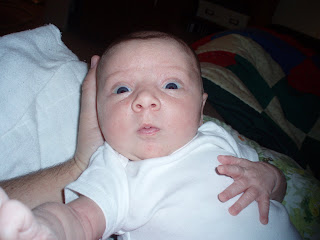 There are a million things that I want to remember for forever, and Matt and I are trying to get better about video taping, but these are some things that I had to get out and written down so that I could remember them forever. I'm sure at 3 months I'll have even more to add!
Posted by Robyn at 4:09 PM